There’s been no intelligence revealed at State Dept. briefings, to the U.N., to European allies or Ukraine, but the U.S. wants everyone to believe they’re telling the truth about an imminent Russian invasion and its “kill lists,” writes Joe Lauria. 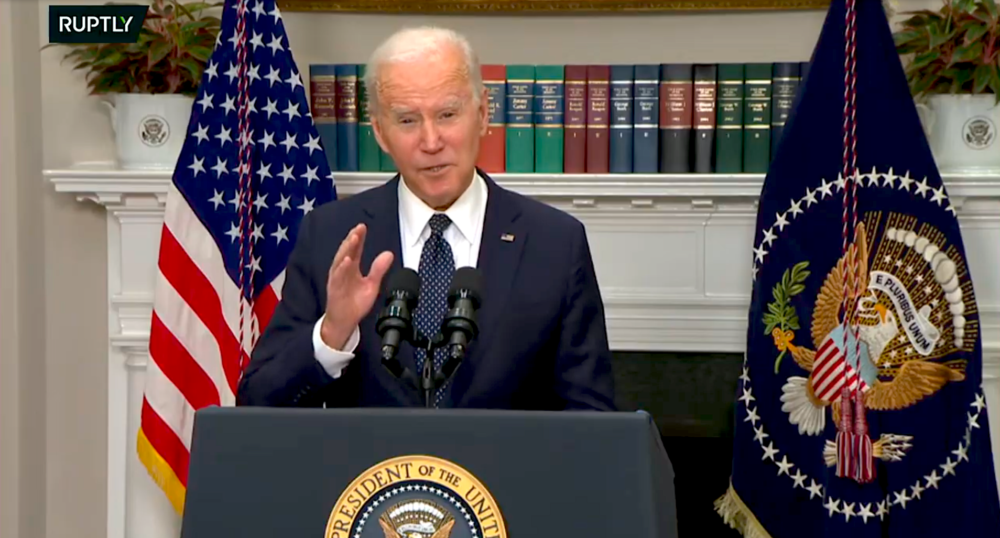 US Says Russia Has ‘Kill Lists’ for Ukraine

U.S. President Joe Biden on Friday said he was convinced that Russian President Vladimir Putin had made up his mind to invade Ukraine, but European officials are not convinced.

“As of this moment I’m convinced he has made the decision” to invade, Biden told a reporter in response to a question at a White House press briefing.  Asked how he knows this, Biden said, “We have a significant intelligence capability.”

“Some European allies questioned the United States’ conviction that the Kremlin will launch hostilities, saying that they have not seen direct evidence suggesting Putin has committed to such a course of action.

One European official told The Washington Post in Munich that ‘we have no clear evidence ourselves that Putin has made up his mind and we have not seen anything that would suggest otherwise.’ Another said that although the situation is grave, ‘at this stage we do not have such clear intelligence’ that Putin has decided to invade.

The officials said they have been told little about the sources and methods the United States used to arrive at its conclusions, limiting their capacity to make independent decisions about how much weight to give statements from Biden that Putin has made a decision to attack.

‘It’s always the raw material that they do not share,’ said one senior NATO diplomat who has had extensive conversations with top American policymakers in Brussels.”

Withholding any raw intelligence, if they have any, U.S. officials just want the Europeans to believe them on a matter of the highest consequence. It is a humiliating position for allies the U.S. has long treated as subordinates.  The U.S. does not appear to have given any intelligence, raw or otherwise, to the Ukrainians either, except for satellite photographs last month, which Ukrainian intelligence dismissed.

President Volodymyr Zelenksy told a press conference at the time that the U.S. should stop its hysteria about an invasion. “They keep supporting this theme, this topic. And they make it as acute and burning as possible. In my opinion, this is a mistake.” He added: “If you look only at the satellites you will see the increase in troops and you can’t assess whether this is just a threat of attack or just a simple rotation.” 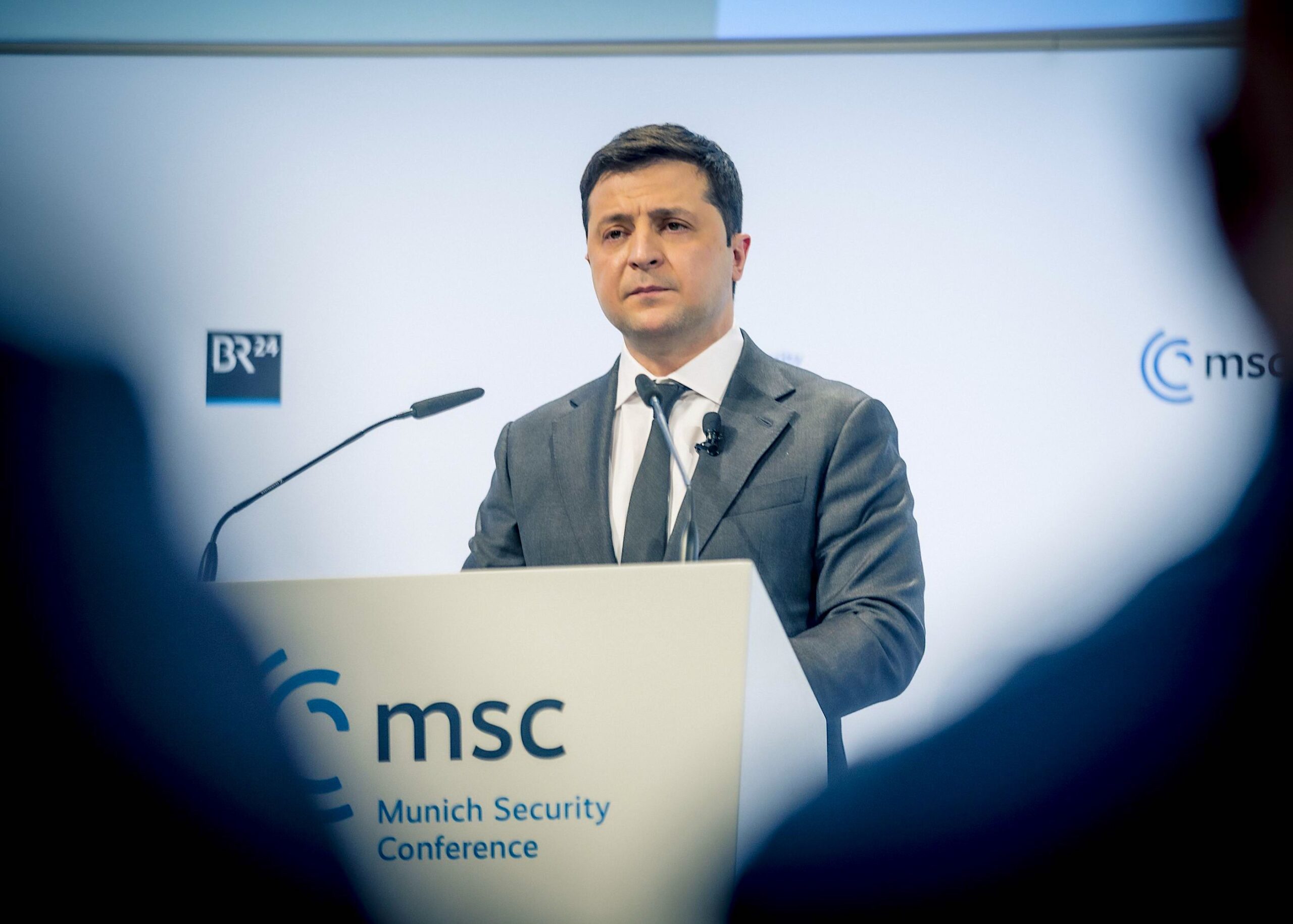 Zelensky at the Munich Security Conference on Saturday. (MSC/Kuhlmann)

What US Says the Intelligence Is

In the same article, the Post tried to explain where this evidence came from, which no one outside of a tight Washington circle has apparently seen, or heard of:

“U.S. intelligence that provided Biden with the confidence to make the assertion came from an order given to Russian subordinates to proceed with a full-scale attack, according to several people familiar with the matter, who spoke on the condition of anonymity because of the matter’s sensitivity. The United States obtained intelligence on the order as Russian military and security officials were taking steps to implement it, and did so very recently, the people said.”

This could only come from a mole in Russia’s political or military hierarchy, from an intercept or it is made up. Not even a redacted version of these reports — if they exist — were shared with senior European officials.

Perhaps feeling the heat from the Post report and other feedback from its allies, a few Biden administration officials on Sunday tried to give a few more crumbs away. They talked anonymously to the The New York Times, but didn’t dare say too much:

“Officials declined to describe the intelligence in any detail, anxious to keep secret their method of collecting the information. But intelligence officials have told the administration they have a high level of confidence in the intelligence they have collected in recent months about Russian military planning, as well as about plots by Moscow’s intelligence agencies to try and create a pretext for war.”

“American military and intelligence assets have confirmed that they have observed the Russian military take steps to execute an attack plan,” the Times reported, but these are merely assertions from intelligence agencies that lied about weapons of mass destruction in Iraq, and that Russia and the Trump campaign were in a conspiracy to steal the 2016 U.S. presidential election. They also got the fall of Kabul wrong.

One would think that having been embarrassed in these major instances that intelligence officials would put forward some evidence or shut up.

But U.S. Secretary of State Antony Blinken went on a Sunday morning news show to say the intelligence learned about “false flags” were already coming true. “Everything leading up to the actual invasion appears to be taking place,’’ he said on on CNN’s “State of the Union.” “All of these false-flag operations, all these provocations to create justifications — all that is already in train.”

This is clearly emerging as the strategy, backed up by “intelligence” that may be fabricated, namely that whatever is happening around Donbass now are Russian-directed attacks covered by deception to make it look like a Ukrainian government offensive, and not an actual U.S.-directed Ukrainian government offensive to draw Russia into invading. If that’s the U.S. plan, there’s good reason to hide it from the Europeans.

Biden said Friday all of NATO, Europe and the “entire free world is united” against Russia, even though none of them have seen the evidence – if there is any — and none of them seem as convinced as he is that there will be war.

“Mr. Biden’s declaration, and the new description of what he based it on, are the latest salvos in a campaign by the administration to use declassified intelligence to expose and disrupt the Kremlin’s plans, perhaps slowing an invasion and buying more time for diplomacy,” the Times reported. However no “declassified intelligence” has emerged, only administration statements masquerading as evidence, while the Times plays along.

Military analyst Scott Ritter wrote Sunday on Consortium News that the U.S. should have evidence indicating whether the Russian troop formations indicate an exercise or an invasion, intelligence which it could have shared with the world at the U.N. Security Council last week — or with European officials this weekend.

On Sunday night, the Post reported that the U.S. had sent a letter to the U.N. Human Rights Council alleging that after Russia invades and occupies Ukraine, it will use lists it has drawn up to target people for torture and detention in concentration camps. The Post reported:

“The letter alleges that Moscow’s post-invasion planning would involve torture, forced disappearances and ‘widespread human suffering.’ It does not describe the nature of the intelligence that undergirds its assessment.”

“We have credible information that indicates Russian forces are creating lists of identified Ukrainians to be killed or sent to camps following a military occupation,” the letter to Michele Bachelet, the U.N. high commissioner for human rights, says.

Those targeted would include “Russian and Belarusian dissidents in exile in Ukraine, journalists and anti-corruption activists, and vulnerable populations such as religious and ethnic minorities and LGBTQI+ persons.”

As the Post pointed out, the letter is only based on “credible information” and does not disclose the “nature of the intelligence,” though it ends by telling Bachelet to contact the U.S. official for “any additional information,” which one would assume would not include raw intelligence.  This comes from a government that runs a concentration camp at Guantanamo, ran a torture center at Abu Ghraib, had a kill list review every Tuesday at the White House and has imprisoned the most important journalist of his generation, Julian Assange.

Elizabeth Throssell, a spokesperson for Bachelet, told Consortium News in an email: “We can confirm that we received a letter this morning from the United States Permanent Mission in Geneva. We are examining it.”

English-language Russian media have not reported on the letter at all.

If this letter is true, how could the United States not try to deter such an invasion and Nazi-like occupation by sending U.S. troops to Ukraine? That it won’t undermines the credibility of this “intelligence.”

The second strange matter was the U.S. embassy in Moscow sending this warning to U.S. citizens on Sunday:

“According to media sources, there have been threats of attacks against shopping centers, railway and metro stations, and other public gathering places in major urban areas, including Moscow and St. Petersburg as well as in areas of heightened tension along the Russian border with Ukraine.”

The media “sources” are not named and there is no further explanation for such a message, which could have numerous meanings.

“Common symptoms of psychosis are … having strong beliefs [or intelligence] that are not shared by people within your community,” might define U.S. foreign policy, which has become increasingly difficult to explain rationally.

← The Evidence for Invasion the US Could Produce
PATRICK LAWRENCE: ‘Primacy or World Order’ →

30 comments for “The Growing Scandal of the Missing Intelligence, Including on Alleged Russian ‘Kill Lists’”