The German admiral’s frank remarks contradict the war hysteria being drummed up by the U.S. and Britain, Joe Lauria reports.

Vice-Admiral Kay-Achim Schönbach, the head of the German navy, has resigned after saying talk of a Russian invasion of Ukraine was “nonsense” and that Russia was merely seeking “respect” for its security concerns in Europe.

“It is easy to give him the respect he really demands – and probably also deserves,” Schönbach told a meeting of a think tank in New Delhi on Friday.

“My minister asked me what does Russia really want?” the vice-admiral said.

“Is Russia really interested in having a small, tiny strip of Ukrainian soil to integrate into their country? No. This is nonsense. I think Putin is putting pressure on it because he knows he can do it. And he splits the European Union. But what he really wants is respect. He wants on a high-level, respect. And my God, giving someone respect is low cost, even no cost. So if I were asked, it is easy to give him the respect he really demands – and probably also deserves. Russia is an old country. Russia is an important country.”

Schönbach also acknowledged that “the Crimean peninsula is gone. It will never come back. This is a fact.” That contradicted NATO’s official position.

German navy chief resigns over Ukraine & Putin comments
–
Germany’s Navy chief, vice-admiral Kay-Achim Schönbach, has vacated his post on Saturday evening – just a day after he said that Crimea "will never come back”, and that Putin and Russia “deserve respect.” pic.twitter.com/nB2Ew3v5EZ

After a likely rebuke from the German Defense Ministry, Schönbach resigned on Saturday, saying he wanted “to avoid any more damage being done to the German navy and above all, to the German federal republic.” The German defense ministry accepted Schönbach’s resignation with “immediate effect,” saying his remarks did not represent Germany’s official position.

However, Germany has continued its refusal to allow German weapons to be shipped to Ukraine, ostensibly to help defend Ukraine from Russia, but very likely to arm Kiev for an offensive against the east of the country. “Weapons deliveries would not be helpful at the moment – that is the consensus within the government,” German Defense Minister Christine Lambrecht said on Saturday.

That led Kubela to condemn Germany, saying on twitter that “the German partners must stop undermining unity with such words and actions and encouraging Vladimir Putin to launch a new attack on Ukraine.” Calling Germany “partners” seems to reveal Ukraine’s thinking that it considers itself a de facto member of NATO.

Russia is seeking legally-binding agreements with the U.S. and NATO that would create a new European security arrangement, rolling back NATO’s expansion to Russia’s borders, keeping Ukraine out of the Western alliance and preventing long-range U.S. missiles from being deployed there.

Accompanying these demands have been Russian troop deployments in the vicinity of the Ukraine border, which the U.S. and its NATO partners are portraying not as a negotiating tactic but evidence of an “imminent” Russian invasion. 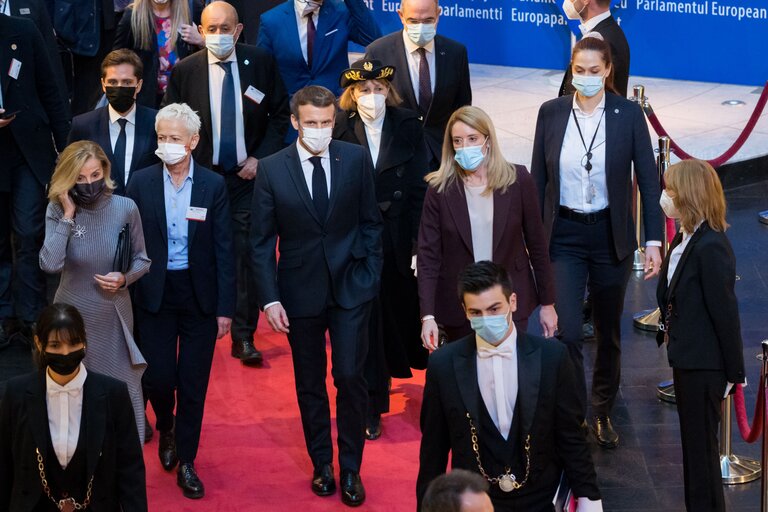 Germany appears to be joining France in trying to lower the temperature and put the breaks on an Anglo-American rush to war. In an address to the European Parliament on Wednesday, French President Emmanuel Macron appeared to show Russia the kind of respect Schönbach was talking about. He said:

“Europe needs to build a collective security order on our continent. Our continent’s security requires a strategic reinforcement of our Europe as a power of peace, a balancing power, particularly in its dialogue with Russia. I have been advocating this dialogue for several years. It is not optional, for our history and our geography are stubborn, both for ourselves and for Russia. For security in our continent, which is indivisible. We need this dialogue…. What we need to build is a European order founded on principles and rules to which we have committed, and which we established not against or without Russia, but with Russia.”

The dissension by the German admiral and the French president to the U.S. position highlights the war hysteria being stirred up daily over Ukraine as a mostly Anglo-American endeavor.

Britain has begun playing an increasing role with the United States in preparing its populations for war, reminiscent of the lead-up to the 2003 U.S-U.K. invasion of Iraq.

On Saturday, the British Foreign Office said Russia is planning to “install a pro-Russian leader in Kyiv as it considers whether to invade and occupy Ukraine.”

The Foreign Office named several Ukrainian politicians it said Russia was considering. “The information being released today shines a light on the extent of Russian activity designed to subvert Ukraine, and is an insight into Kremlin thinking,” Foreign Secretary Liz Truss said in a statement.

The Ukrainian people already installed a pro-Russian leader through the ballot box, Viktor Yanukovych. He was overthrown in an actual U.S.-backed coup in Ukraine in 2014, leading to the continuing crisis.

Britain produced no evidence to back up its claim (though it was prominently spread by Western media), unlike the evidence that was produced of the U.S. coup in Kiev. It came in the form of a leaked telephone call between then U.S. Assistant Secretary of State for European and Eurasian Affairs Victoria Nuland and the then U.S. ambassador to Ukraine in which they discussed who the new Ukrainian leader would be, weeks before the coup happened.

Britain has released no such intercepts to back its allegation.

via @NYTimes You mean the way the voters did legally before the coup? This is the Nuland story in reverse, except without the evidence. https://t.co/6GkWvIY9fz

But Britain has gone a step further. It is spreading alarm that the standoff can lead to a world war. Liz Truss, the British foreign secretary, traveled as far as Australia to raise fears that China might join the war by attacking Taiwan if Russia “invaded” Ukraine.

An interview she gave to The Sydney Morning Herald, under the headline: “Aggressors working together: UK’s Truss warns China could follow Russia into war,” began:

“China could use a Russian invasion of Ukraine as an opportunity to launch aggression of its own in the Indo-Pacific, British Foreign Secretary Liz Truss has warned. ‘I don’t think we can rule that out,” Ms Truss said. … “Russia is working more closely with China than it ever has. Aggressors are working in concert and I think it’s incumbent on countries like ours to work together.’”

“Remarks by the British Foreign Secretary Liz Truss that China could engage in military aggression in the Pacific, encouraged by Russia’s contingent moves against Ukraine, are nothing short of demented. Not simply irrational, demented. …

The underlying story is the government’s desperate promotion of Britain as a strategic partner of Australia in a policy of containment of China. The reality is Britain does not add up to a row of beans when it comes to East Asia. Britain took its main battle fleet out of East Asia in 1904 and finally packed it in with its ‘East of Suez’ policy in the 1970s. And it has never been back.

Britain suffers delusions of grandeur and relevance deprivation. But there they were at Admiralty House kidding the rest of us that their ‘co-operation’ added up to some viable policy. Australia’s great Foreign ‘non minister’, Marise Payne, supported by the increasingly strident Defence Minister Peter Dutton, standing beside the British Foreign Secretary looking wistfully for Britain’s lost worlds of the 19th and 20th centuries. Really.”

Meanwhile, the Americans and Russians continue to talk past each other over the crisis. Russia demanded the round of diplomacy calling for a new security arrangement in Europe, while U.S. and British leaders and their loyal media think the talks are only about preventing what they alone say is an imminent Russian invasion of Ukraine.