This sudden embrace of the idea that governments can stage attacks on their own people to justify their pre-existing agendas is a sharp pivot from the scoff such a notion in mainstream liberal circles has typically received. 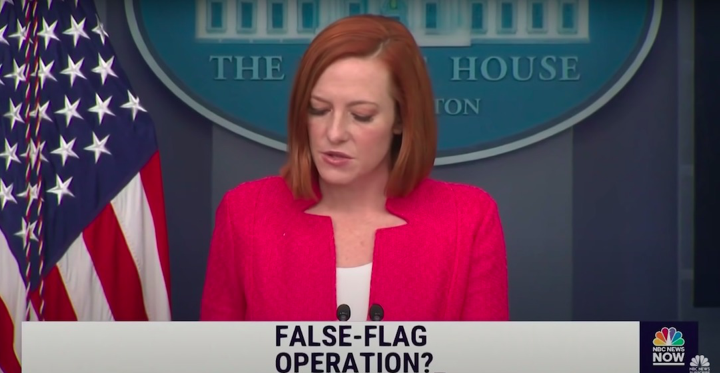 Listen to a reading of this article

In a drastic pivot from typical denunciations of false flag operations as conspiratorial nonsense that don’t exist outside the demented imagination of Alex Jones, the U.S. political/media class is proclaiming with one voice that Russia is currently orchestrating just such an operation to justify an invasion of Ukraine.

“As part of its plans, Russia is laying the groundwork to have the option of fabricating a pretext for invasion,” White House Press Secretary Jen Psaki told reporters on Friday. “We have information that indicates Russia has already pre-positioned a group of operatives to conduct a false flag operation in eastern Ukraine.”

“Without getting into too much detail, we do have information that indicates that Russia is already working actively to create a pretext for a potential invasion, for a move on Ukraine,” Pentagon Spokesperson John Kirby told the press on Friday. “In fact, we have information that they’ve pre-positioned a group of operatives, to conduct what we call a false flag operation, an operation designed to look like an attack on them or their people, or Russian speaking people in Ukraine, as an excuse to go in.”

The U.S. government has substantiated these incendiary claims with the usual amount of evidence, by which I of course mean nothing. The mass media have not been dissuaded from reporting on this issue by the complete absence of any evidence that this Kremlin false flag plot is in fact a real thing that actually happened, their journalistic standards completely satisfied by the fact that their government instructed them to report it. Countless articles and news segments containing the phrase “false flag” have been blaring throughout all the most influential news outlets in the Western world without the slightest hint of skepticism.

This sudden embrace of the idea that governments can stage attacks on their own people to justify their own pre-existing agendas is a sharp pivot from the scoff that such a notion in mainstream liberal circles has typically received.

This 2018 article from The New York Times simply dismisses the idea that the 2014 Maidan massacre was a false flag carried out by Western-backed opposition fighters in Ukraine to frame the riot police of the government who was ousted in that coup, for example, despite the existence of plenty of evidence that this is indeed what happened. This BBC article dismisses without argument the idea that the alleged 2018 chemical weapons attack in Douma, Syria could have been a false flag carried out by the Al Qaeda-aligned insurgents on the ground to provoke a western attack on the Syrian government, yet there are mountains of evidence that this was the case.

“The way the mass media will instantly embrace an idea to which they’ve heretofore been consistently hostile just because their government told them to do it says so much about the state of the so-called free press today.”

Articles denouncing the very idea of “false flag conspiracy theories” surface routinely in the mass media. Snopes has a whole article explaining that false flags are kooky nonsense without any mention of the fact that this is a known tactic we’ve seen intelligence operatives discussing in declassified documents, like when the C.I.A. considered planting bombs in Miami to blame Castro. [ED.: And how the Nazis began World War II.]

I myself was once temporarily suspended by Facebook just for posting an article about false flag operations that are publicly acknowledged to have occurred. People who dare to question the many gaping plot holes in the official 9/11 narrative have often been treated with the same disdain and revulsion as neo-Nazis and pedophilia advocates.

"A US official told CNN" is not a "Scoop" but demonstrates the willingness of 'journalists' to stenograph unverifiable government disinformation. https://t.co/wr2u3xKtiI

None of this is to say that every theory about any false flag operation is true; many are not. But the way the mass media will instantly embrace an idea to which they’ve heretofore been consistently hostile just because their government told them to do it says so much about the state of the so-called free press today, and the fact that the rank-and-file public simply accepts this and marches along with it as though talking about false flags has always been normal says so much about the level of Orwellian doublethink that people have been trained to perform in today’s information ecosystem.

The way false flag operations were widely considered conspiratorial hogwash until the instant they were reported as real by the media institutions who’ve lied to us about every war is downright creepy.

The problem with preemptive false flag accusations is of course that the side making the claim can simply launch an unprovoked attack and then say “See? They’re staging a false flag to frame our side, just like we said they would!” And then they can present their subsequent actions as defensive in nature, when in reality they were the aggressors and instigators.

We are seeing nothing from the obedient Western news media to suggest they’d do anything other than uncritically regurgitate such claims into the minds of their trusting audiences.

As the Beltway doctrine that U.S. unipolar hegemony must be preserved at all cost crashes headlong into the reality of an emerging multipolar world, the U.S. government is now more dangerous than it has ever been at any point in its history. We need the press to be holding the drivers of empire to account with the light of truth, and we need the public to be opposing and scrutinizing these reckless escalations.

Instead, we are getting the exact opposite.

← King Remained Hopeful to the End
JOHN KIRIAKOU: The Scandal of US Prisons →

29 comments for “Caitlin Johnstone: False Flags Suddenly All the Rage”