The chaos in the Chicago Public Schools has been mirrored in districts across the U.S., Barbara Madeloni reports. 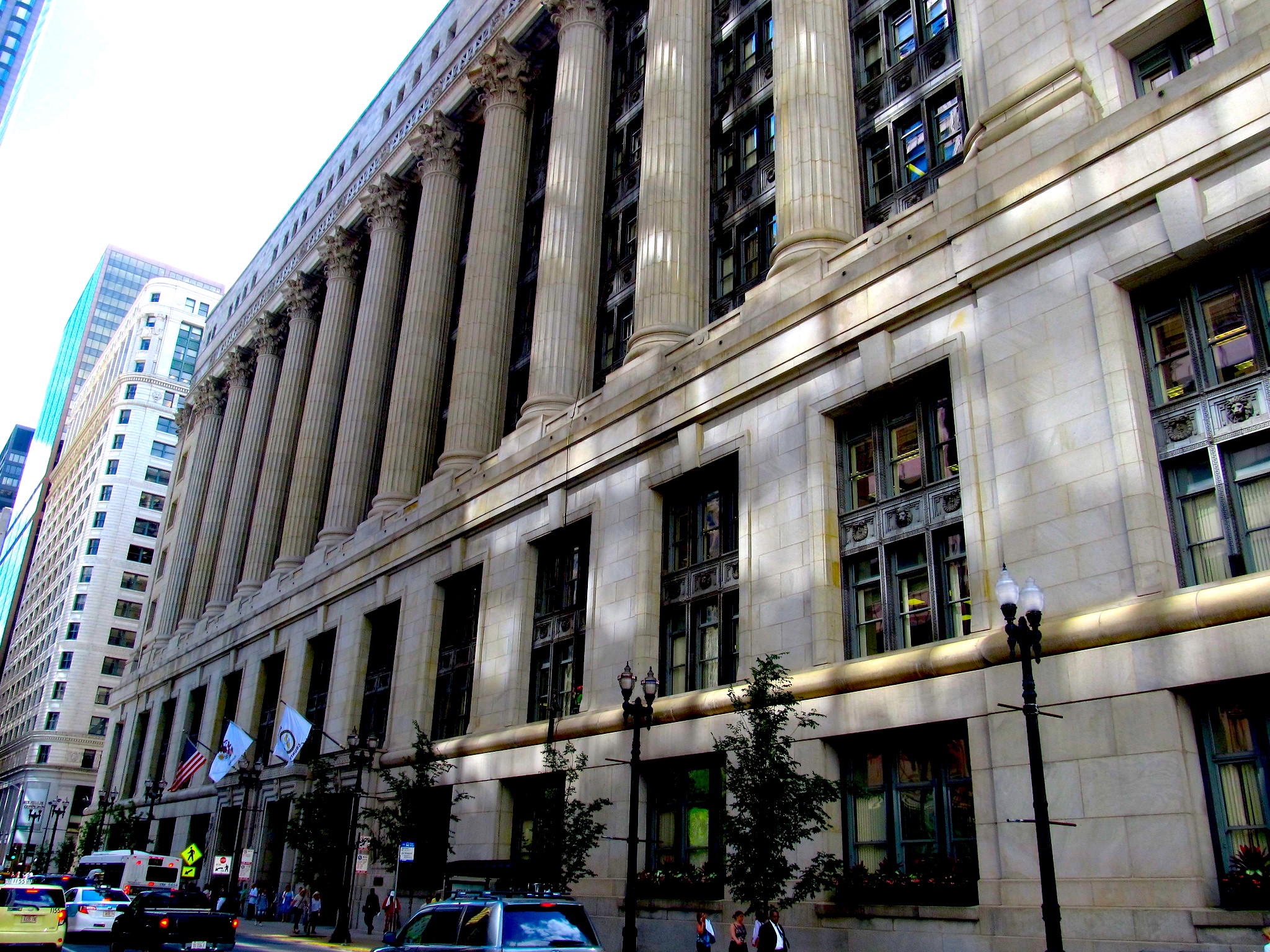 Chicago Teachers Union members voted by 77 percent on Jan, 4 to go fully remote until effective Covid mitigations to protect educators and students were approved by members and enacted, or until the current Covid surge subsided.

Within a week they had a tentative agreement on mitigation measures. Members ratified it Jan. 12 by 56 percent and returned to in-person teaching.

With citywide positivity rates over 20 percent and hospitals overwhelmed, Chicago Public Schools had already faced staffing shortages the first few days of the year. When the district failed to implement adequate testing protocols, CTU members determined that the safety of students and educators once again required remote learning.

CPS responded by locking educators out of their online learning accounts. Students would not have access to their teachers.

Mayor Lori Lightfoot attacked CTU, insisting that schools were safe and the union was acting against the interests of students. Meanwhile children across the country were being hospitalized at alarming rates that doubled within a week in D.C. and quadrupled within a week in New York City.

Contradicting the assurances from politicians and policymakers that schools were the safest place for children to avoid Covid, data from the Illinois Department of Public Health showed schools to be the likely source of 30 percent of all Covid exposures —much more than any other source.

Hospitalizations nationwide are as high as they’ve been since the beginning of the pandemic and there has been a startling growth in Covid-positive hospitalizations of children under age 5 .

Leading up to the lockout, the district’s efforts to assess safety were chaotic and ineffective.

CPS sent approximately 150,000 Covid tests home with students. But they distributed these on the last day before the holiday break, so many students weren’t there to pick them up.

Students were to complete the test before returning to school and drop it at a FedEx location. The distribution of FedEx drop boxes across Chicago is limited, though, creating problems for families who didn’t have drop boxes nearby. Even so, enough families had access to overflow the drop boxes and overwhelm FedEx, which apparently didn’t know these tests were coming.

In the end only 35,000 tests were returned with valid results; those had an 18 percent positivity rate. 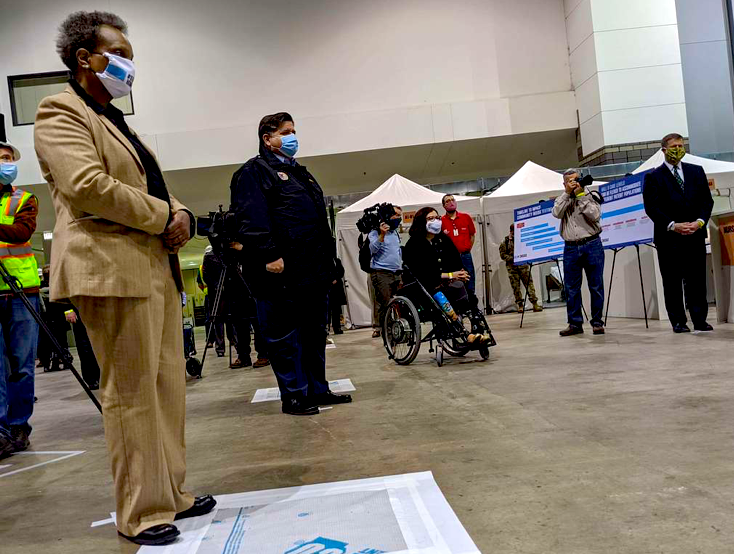 This kind of chaos was mirrored in districts across the country. In Massachusetts, the Department of Elementary and Secondary Education announced on the Thursday before school restarted that it would distribute 200,000 rapid tests and K95 masks to districts to give to educators. But a promised Friday delivery became a Sunday/Monday delivery, there weren’t enough tests, and some of the tests were apparently expired. Then it turned out that the K95 masks had failed the MIT safety requirements for safe use and had already been recalled in Canada.

“There is so little actual care for students, even while the discourse is all about ‘care.’ If they cared they would increase funding, assure appropriate ventilation, and provide for the mental health of students. But we don’t hear any of that from the people telling us to go back into the buildings.”

Politicians all the way up the chain were on the same program. White House Press Secretary Jen Psaki insisted that schools could open safely, naming Chicago specifically and saying that federal funds had been provided to assure schools’ safety.

CTU Vice President Stacy Davis Gates responded that schools are not seeing their part of the $2 billion that the city got from the federal government. The city used 40 percent of its American Rescue Plan funds to pay off debt.

And did not speak to the reality that many schools still lack mitigation measures such as HVAC systems, testing protocols and masking.

Melissa Williams, president of the occupational and physical therapists chapter of the United Federation of Teachers in New York City, is having none of it. “We have seen the White House all the way down to school administrators make this about personal responsibility, and not about what we are owed in our democratic social contract,” she said.

Meanwhile educators in Chicago have been knocking on doors to help parents sign up for testing and vaccines. Locked out of their school accounts, they’ve had to build their own lists.

Erin Lynch, a Chicago visual arts teacher who knocked doors at an apartment building near her school, said the experience had been “phenomenal” — a chance also “for parents to share their experiences,” because “the union knows they should use our expertise and the knowledge of our communities.”

In Philadelphia the week after the break, 92 schools had to move to remote learning because there were not enough staff. In Boston the second day back, more than 1,200 teachers and staff called out.

In New York, classes are being combined in large groups in auditoriums, or staff are sent to manage classes they are not prepared to teach. One Texas district is so short-staffed that it has asked parents to substitute.

Of course, student absences are up as well. Chicago teacher Lore Torres said three of her own children — all vaccinated — had tested positive since Christmas. 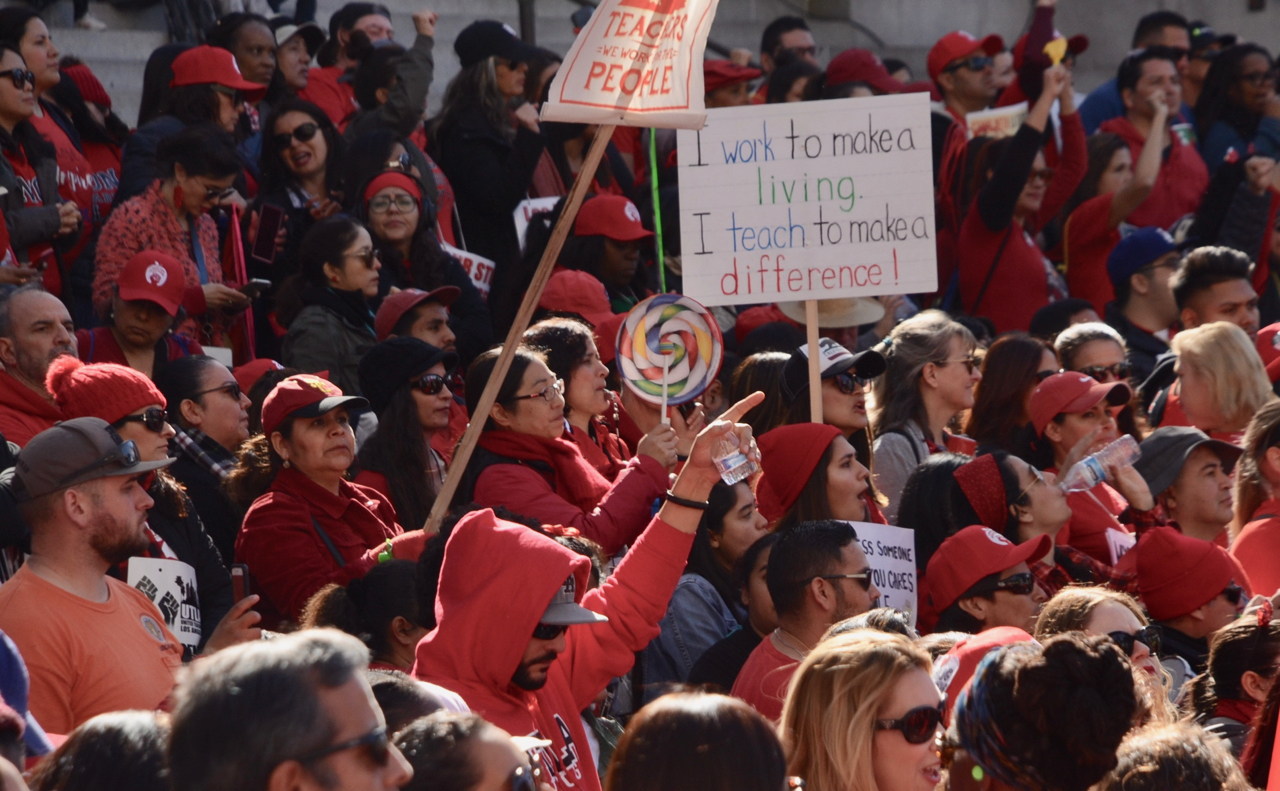 Chicago members determined those demands democratically through online meetings and votes. Elsewhere, rank-and-file educators in other unions have been developing demands and organizing actions without the support of their union leaders.

In New York, the Movement of Rank-and-File Educators (MORE) caucus has grown because so many teachers “are truly fed up with the situation” and eager to “find support personally, but also to take actions collectively,” said educator Shoshana Brown.

After the Omicron variant exploded in December, MORE brought educators together online three times during the holiday break to identify the problems with the city’s response and report what actions they were planning in their own worksites — such as calling chapter meetings, circulating petitions, contacting parents, getting tested before school started, and organizing a day of action where everyone wore black. Committees developed an escalation plan that included rallies across the city and a potential sick-out.

The story played out differently in Los Angeles, where the pandemic hit just a year after a powerful strike. United Teachers Los Angeles still has the goodwill of the community and the upper hand over the district, and so the union has won Covid protections including baseline testing for everyone (staff and students alike) before a return to school.

The district provided quick-turnaround on-site testing for educators the day before school restarted; paid teachers to get tested over break; continued contact tracing, masking, and a remote option; and provided paid time off for Covid testing.

A big difference, notes UTLA Secretary Arlene Inouye, is that Los Angeles has an elected school board, while CPS is under mayoral control — though local politics can make this play out differently in each city. In Boston, where the school committee is appointed by the mayor but the state commissioner of education and the governor will not allow remote learning, newly elected Mayor Michelle Wu was putting plans in place to buck the commissioner’s order and go remote if necessary.

How Much Was Possible?

Chicago Mayor Lightfoot wields an enormous amount of individual power—and she was adamant that she would not negotiate remote learning or opt-out testing of students. This left a narrow range of issues where a win seemed possible.

That fact was reflected in the tentative agreement that CTU reached with CPS on Jan. 10. The district committed to quickly ramp up to testing 10 percent of students weekly; provide stipends for educators to try to secure parent agreement for students to be tested; do contact tracing at the building level, again via stipends for educators; and flip a school to remote when there is high community transmission and 40 percent of the students have to isolate/quarantine.

In light of the tentative agreement, the CTU House of Delegates voted 63 to 37 percent to suspend the remote action and return to school buildings Jan. 11. Prior to returning to the buildings, members spent Jan. 10 calling through families to encourage them to opt in to testing.

Lynch said these phone calls resulted in 50 percent of her students opting in. Still, she said, “it is a big lift” for educators and organizers to take on tracking and securing parental approval for testing. She voted against the agreement because “students, the school community, and staff deserve so much more.” But she understood why others voted yes: “It isn’t just us versus the mayor. It is us versus the whole push at so many levels, Biden too, to have us in schools.”

Outside Chicago, the fight continued. In New York, MORE educators were heading to a rally at their union offices. Educators in Arizona were planning a “wear black” day. Wildcat actions have closed certain schools in New York, Seattle, Oakland, and San Francisco.

The pushback is now coming from students as well. Hundreds of students walked out of New York high schools Jan. 11; so did hundreds at a high school near Lansing, Michigan. Students in Chicago and Seattle are planning walkouts on Friday. In Oakland, more than 1,200 students have signed a pledge to stay home starting January 18 if their safety demands are not met.

And with absences mounting among students and staff across the country, more and more school buildings might have to close simply because there are not enough students or staff to make in-school learning tenable.

Barbara Madeloni is education coordinator at Labor Notes and a former president of the Massachusetts Teachers Association; barbara@labornotes.org

3 comments for “COVID-19: As Omicron Rages, US Teachers Fight for Safety”