U.S. government policies have treated civilians as expendable, writes Norman Solomon. Meanwhile truth tellers such as Julian Assange, Chelsea Manning and Nathan Hale get punished for what they expose. 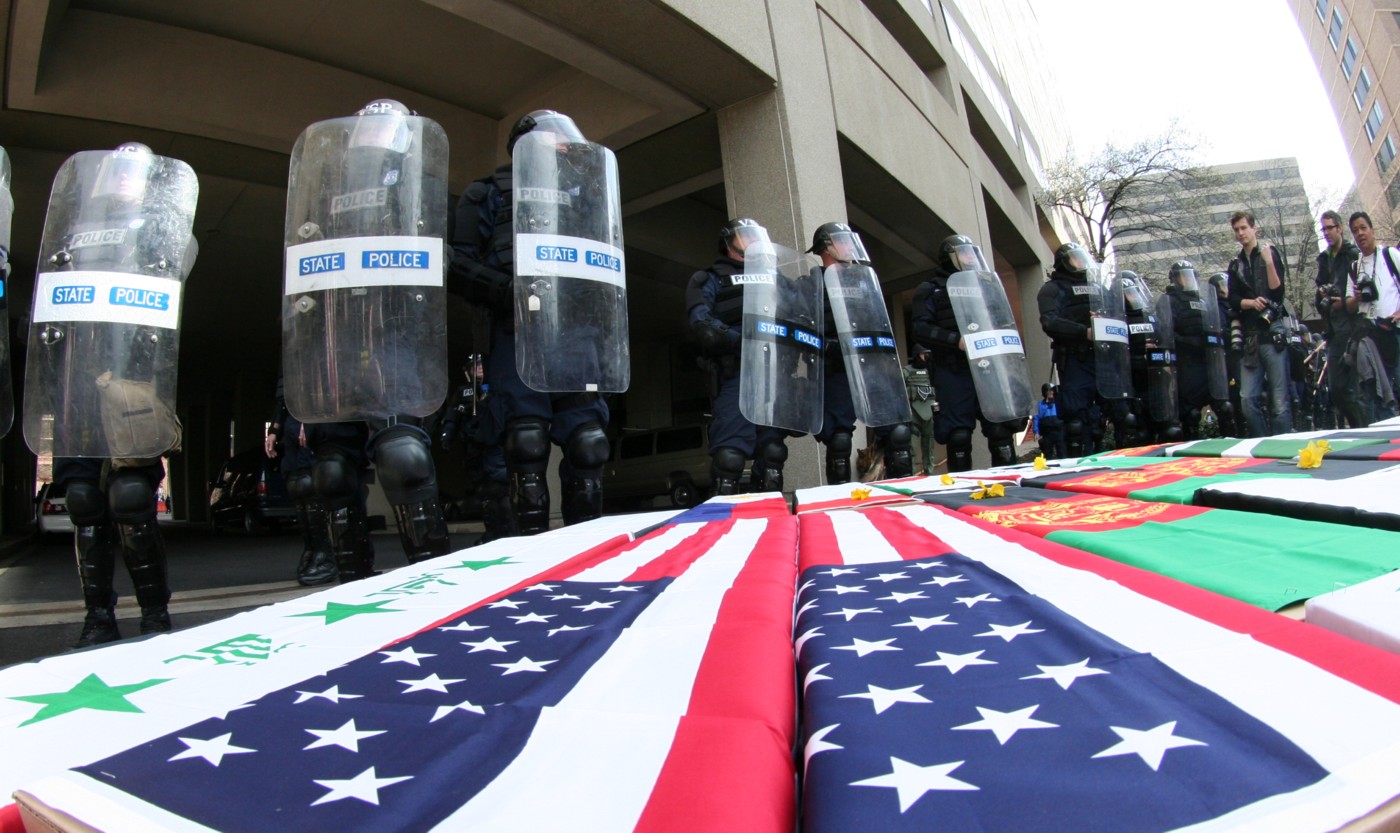 Mock coffins placed near the offices of military contractors during a protest against the Iraq war in and around Washington. March 21, 2009. (Victor Reinhart, CC BY-SA 3.0, Wikimedia Commons)

Top U.S. officials want us to believe that the Pentagon carefully spares civilian lives while making war overseas. The notion is pleasant. And with high-tech killing far from home, the physical and psychological distances have made it even easier to believe recent claims that American warfare has become “humane.”

Such pretenses should be grimly laughable to anyone who has read high-quality journalism from eyewitness reporters like Anand Gopal and Nick Turse. For instance, Gopal’s article for The New Yorker in September, “The Other Afghan Women,” is an in-depth, devastating piece that exposes the slaughter and terror systematically inflicted on rural residents of Afghanistan by the U.S. Air Force.

Turse, an incisive author and managing editor at TomDispatch, wrote this fall:

“Over the last 20 years, the United States has conducted more than 93,300 air strikes — in Afghanistan, Iraq, Libya, Pakistan, Somalia, Syria, and Yemen — that killed between 22,679 and 48,308 civilians, according to figures recently released by Airwars, a U.K.-based airstrike monitoring group. The total number of civilians who have died from direct violence in America’s wars since 9/11 tops out at 364,000 to 387,000, according to Brown University’s Costs of War Project.”

Those deaths have been completely predictable results of U.S. government policies. And in fact, evidence of widespread civilian casualties emerged soon after the “war on terror” started two decades ago. Leaks with extensive documentation began to surface more than 10 years ago, thanks to stark revelations from courageous whistleblowers and the independent media outlet WikiLeaks.

The retribution for their truth-telling has been fierce and unrelenting. WikiLeaks publisher Julian Assange is in a British prison, facing imminent extradition to the United States, where the chances of a fair trial are essentially zero. Former U.S. Army intelligence analyst Chelsea Manning spent seven years in a military prison. Former U.S. Air Force analyst Daniel Hale, who revealed murderous effects of U.S. drone warfare, is currently serving a 45-month prison sentence. They had the clarity of mind and heart to share vital information with the public, disclosing not just “mistakes” but patterns of war crimes.

Such realities should be kept in mind when considering how The New York Times framed its blockbuster scoop last weekend, drawing on more than 1,300 confidential documents. Under the big headline “Hidden Pentagon Records Reveal Patterns of Failure in Deadly Airstrikes,” the Times assessed U.S. bombing in Iraq, Syria and Afghanistan — and reported that “since 2014, the American air war has been plagued by deeply flawed intelligence, rushed and imprecise targeting and the deaths of thousands of civilians, many of them children.”

What should not get lost in all the bold-type words like “failure,” “flawed intelligence” and “imprecise targeting” is that virtually none of it was unforeseeable. The killings have resulted from policies that gave very low priority to prevention of civilian deaths.

The gist of those policies continues. And so does the funding that fuels the nation’s nonstop militarism, most recently in the $768 billion National Defense Authorization Act that spun through Congress this month and landed on President Joe Biden’s desk.

Dollar figures are apt to look abstract on a screen, but they indicate the extent of the mania. Biden had “only” asked for $12 billion more than President Donald Trump’s last NDAA, but that wasn’t enough for the bipartisan hawkery in the House and Senate, which provided a boost of $37 billion instead.

Actually, factoring in other outlays for “defense,” annual U.S. military spending is in the vicinity of $1 trillion. Efforts at restraint have hit a wall. This fall, in a vote on a bill to cut 10 percent of the Pentagon budget, support came from only one-fifth of the House, and not one Republican.

In the opposite direction, House support for jacking up the military budget was overwhelming, with a vote of 363-70. Last week, when it was the Senate’s turn to act on the measure, the vote was 88-11.

Overall, military spending accounts for about half of the federal government’s total discretionary spending — while programs for helping instead of killing are on short rations for local, state and national government agencies. It’s a destructive trend of warped priorities that serves the long-term agendas of neoliberalism, aptly defined as policies that “enhance the workings of free market capitalism and attempt to place limits on government spending, government regulation, and public ownership.”

While the two parties on Capitol Hill have major differences on domestic issues, relations are lethally placid beyond the water’s edge. When the NDAA cleared the Senate last week, the leaders of the Armed Services Committee were both quick to rejoice.

“I am pleased that the Senate has voted in an overwhelming, bipartisan fashion to pass this year’s defense bill,” said the committee’s chair, Sen. Jack Reed, a Democrat from Rhode Island. The ranking Republican on the panel, Jim Inhofe from Oklahoma, chimed in: “This bill sends a clear message to our allies — that the United States remains a reliable, credible partner — and to our adversaries — that the U.S. military is prepared and fully able to defend our interests around the world.”

The bill also sends a clear message to Pentagon contractors as they drool over a new meal in the ongoing feast of war profiteering.

It’s a long way from their glassed-in office suites to the places where the bombs fall.