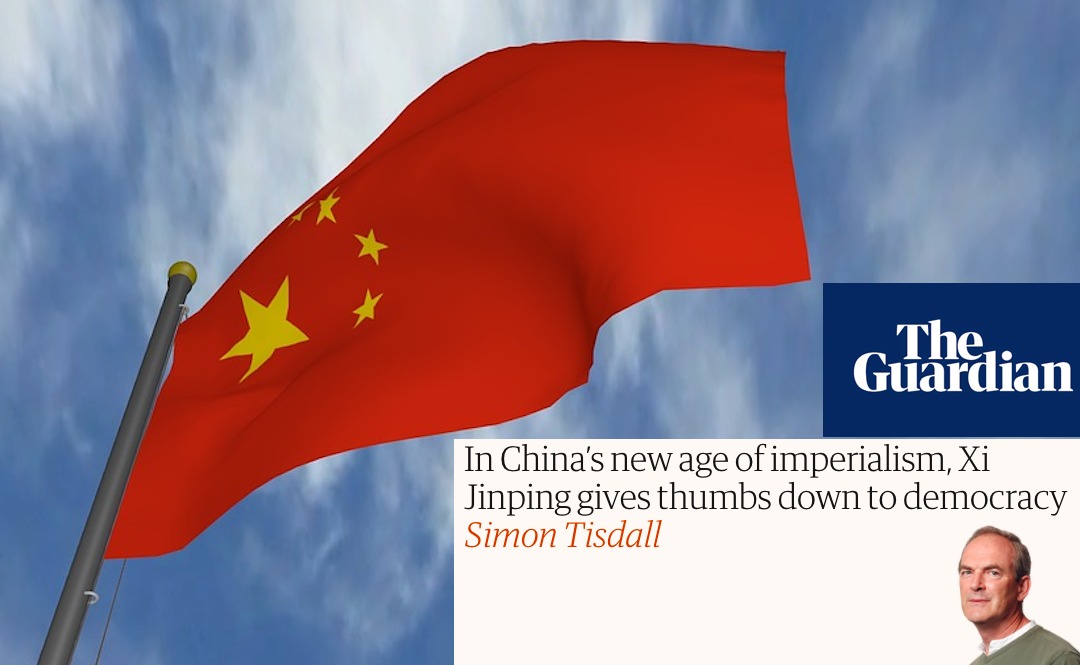 The article “In China’s new age of imperialism, Xi Jinping gives thumbs down to democracy” is subtitled “Beijing is aiming for global ascendancy – but its leader’s vision of world dominion is centralised, oppressive and totalitarian.” None of these claims are substantiated in the text which follows.

It’s pretty cute how the only time you’ll ever see the word “imperialism” used in The Guardian (without scare quotes) is when it wants to criticize a nation the world’s actual imperialist dominator, the United States, doesn’t like. You will never see that word used to refer to the behavior of the cluster of US-aligned nationswhich functions as a single empire on foreign policy, nor to the government which has circled the planet with hundreds of military bases and works to kill, starve and subvert any population who refuses to be commanded, controlled, exploited or plundered.

In fact, Tisdall goes so far as to promote the hilarious idea that the days of any Western power having imperialist inclinations are long gone.

"Imperialism, in all its awful forms, still poses a threat. But it is no longer the imperialism of the west, rightly execrated and self-condemned. Today’s threat emanates from the east."https://t.co/At8opweTEb

“Imperialism, in all its awful forms, still poses a threat,” Tisdall writes. “But it is no longer the imperialism of the west, rightly execrated and self-condemned. Today’s threat emanates from the east. Just as objectionable, and potentially more dangerous, it’s the prospect of a totalitarian 21st-century Chinese global empire.”

Well cool. The Western world at some point in history apparently renounced imperialism, and now the east is the only direction from whence that threat emanates. Not sure when that happened, but Tisdall appears quite certain that imperialism has been completely stomped out everywhere west of Xinjiang, including in the United States government.

“[N]ascent empires establish an (often delusional) narrative, or ‘mission statement’, to justify their activities,” Tisdall writes. “British imperialists claimed to be a civilising force, bringing law and Christianity to the great unwashed. The postwar American empire was, supposedly, all about championing democracy.”

“Was.” The postwar American empire, back in the days when it existed, “was” supposedly about championing democracy. You know, back when it would exert force upon nations on the basis that they were insufficiently democratic. Again, Tisdall does not say on what precise date this ended, or name the point in history when the entire U.S. empire blipped out of existence.

This would be the same United States that is currently constructing long-range missile systems on a chain of islands near China’s coast for the explicit purpose of threatening China. One need only imagine what would happen if China began building long-range missile systems off a U.S. coastline to understand who is the real imperialist aggressor between these two nations.

There exist all kinds of arguments that can be made about whether or not the Chinese government is imperialist and if so to what extent. What absolutely do not exist are arguments that China is more imperialist than the United States and its tight cluster of allies, or anywhere remotely close. The government which continually uses its military and economic might to bully and manipulate the world into aligning with its geostrategic interests is indisputably the more imperialist force, by a massive margin. 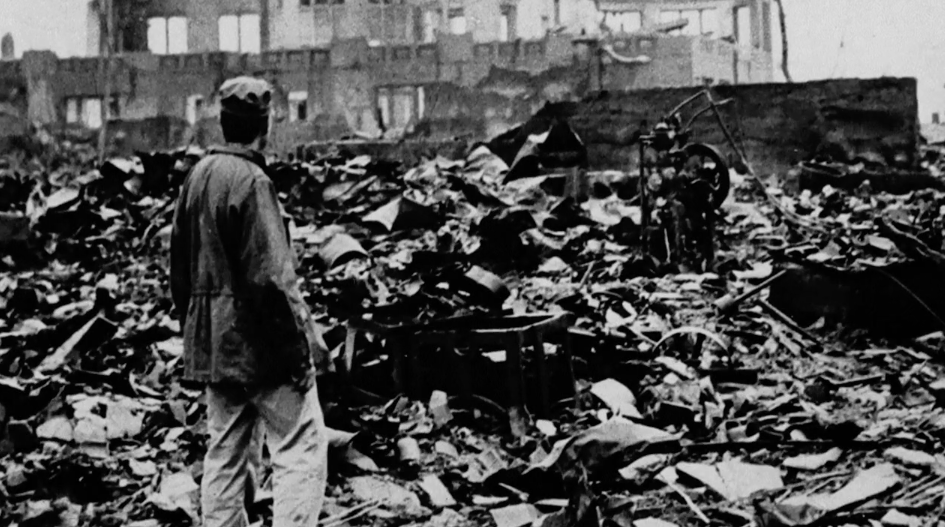 As evidence for his pants-on-head gibbering that China has completely supplanted all Western powers as an imperialist force in our world and is trying to become a globe-dominating empire, Tisdall cites three points: (1) that China engages in trade, (2) that China has a single military base in Djibouti and (3) that the U.S. intelligence cartel has asserted that China plans on building a second military base in Equatorial Guinea, with perhaps more to follow.

“The first phase of China’s new imperial age is already in train. Xi’s ambitious belt and road investment and infrastructure initiative (BRI) touches 60 countries,” Tisdall writes. “China is the world’s largest trading nation and largest exporter, with $2.6tn worth of exports in 2019.”

So, trade. That’s trade. The idea that an investment and infrastructure plan rises to anywhere near the level of US wars which have killed millions and displaced tens of millions just since the turn of this century is risible.

Antiwar’s Daniel Larison has a great article out mocking and debunking the foam-brained hysterical shrieking about how the completely unsubstantiated U.S. intelligence claim that Beijing is trying to establish a military base in Equatorial Guinea “some six thousand nautical miles away from the US mainland” poses any threat to the United States.

“The US faces very few serious threats from other states, and the United States is extraordinarily secure from physical attack,” Larison writes. “To make other states seem remotely threatening to US security, the government and cooperative media outlets have to exaggerate the power of other states and inflate their ability to threaten Americans. Because of the huge mismatch between the demands of propaganda and the less alarming reality, this often creates absurd results.”

“China already has a naval base in Djibouti, in the Horn of Africa,” Tisdall writes. “It is said to be considering an island airbase in Kiribati that could in theory threaten Hawaii. Meanwhile, it continues to militarise atolls in the South China Sea. A Pentagon report last month predicted China will build a string of military bases girdling the world, including in the Arctic. CCP ‘target’ countries include Pakistan, Sri Lanka, Myanmar, the United Arab Emirates, Kenya and Angola, it said.”

So, one single foreign military base in the whole entire world, plus a bunch of imagination and conjecture by military and intelligence operatives. This compared to the 750 military bases that the U.S. actually, physically has around the world. Some “empire” you’ve got there, Xi.

Not only is it laughable to claim that the US is no longer imperialist, there’s not even any evidence that China seeks to replace it as the unipolar global hegemon. Western spinmeisters have been churning out think pieces for years claiming that China is trying to rule the world, but if you actually examine the basis for those claims all you’ll find is evidence that China wants a multipolar world of multiple powers as opposed to a unipolar one where the world is dominated by the U.S. or any other nation.

As we discussed previously, it’s not like the floundering U.S. empire has been making the business of planetary domination look sexy. The idea that every nation wants to dominate the world the way the U.S. does is just a dopey projection by propaganda-addled Western minds who’ve been programmed to believe the game of unipolar conquest is normal and desirable.

Tisdall also inserts the obligatory accusation of “genocide” that every Western propagandist is required to bleat whenever the Chinese government is under discussion, which has been thoroughly discredited by many people and even the Western media have been forced to walk back from as tourism surges in Xinjiang.

Tisdall also cites a quote by Xi Jinping in which the Chinese premier says his country will defend itself from those who try to bully, oppress or subjugate it as evidence that the leader has “combative ideas” and believes “imperial might makes right”:

“We have never bullied, oppressed, or subjugated the people of any other country, and we never will. By the same token we will never allow anyone to bully, oppress or subjugate [China],” he said. “Anyone who tries will find themselves on a collision course with a steel wall forged by 1.4 billion people.”

It is very revealing how many empire propagandists keep interpreting a warning that China will defend itself from aggressors as a menacing and aggressive act. Almost like they believe it is their right to bully, oppress and subjugate all nations without opposition or resistance.

Agreeing with Simon Tisdall on any foreign policy issue is nature’s way of telling you to revise your media consumption habits.

The mass media have been growing astonishingly forceful in their efforts to manipulate the world into being so terrified of China that they’ll consent to any agenda no matter how insane and dangerous. The more forceful they become with their manipulations, the more important it is to counter their lies.

We’re being shoved in a very bad direction at an increasingly frenetic pace. This is being done for a reason. Be alert.

← The Great ‘What if?’ for Julian Assange
The Right is Building Armies of Confrontation →