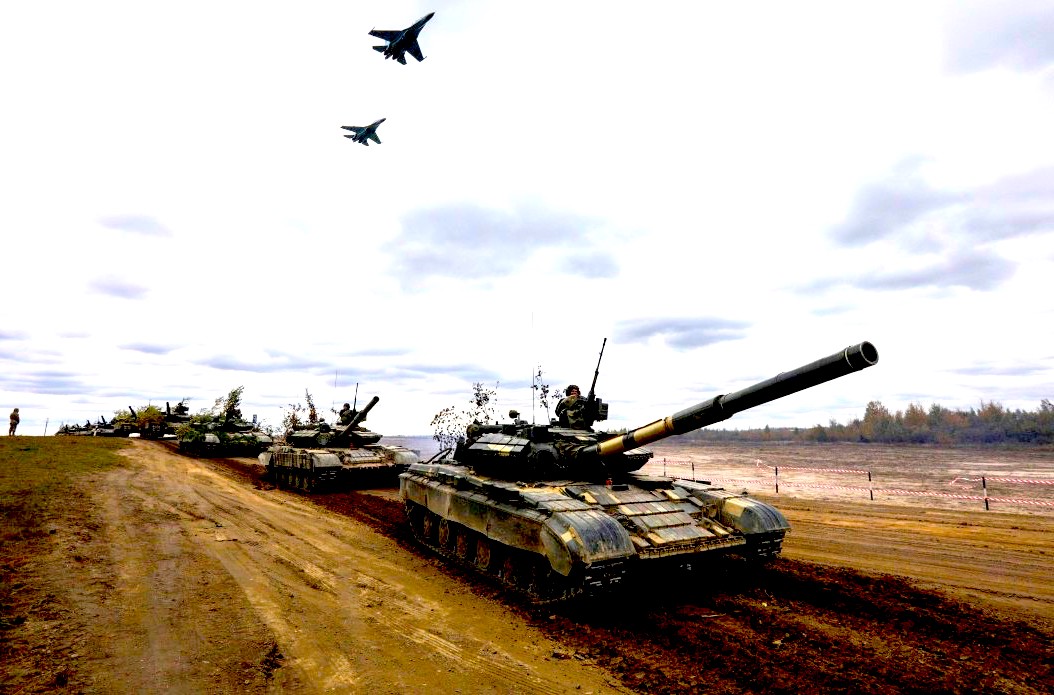 A report in Covert Action Magazine from the self-declared Donetsk People’s Republic in Eastern Ukraine describes grave fears of a new offensive by Ukrainian government forces, after increased shelling, a drone strike by a Turkish-built drone and an attack on Staromaryevka, a village inside the buffer zone established by the 2014-15 Minsk Accords.

The People’s Republics of Donetsk (DPR) and Luhansk (LPR), which declared independence in response to the U.S.-backed coup in Ukraine in 2014, have once again become flash points in the intensifying Cold War between the United States and Russia. The U.S. and NATO appear to be fully supporting a new government offensive against these Russian-backed enclaves, which could quickly escalate into a full-blown international military conflict.

The last time this area became an international tinderbox was in April, when the anti-Russian government of Ukraine threatened an offensive against Donetsk and Luhansk, and Russia assembled thousands of troops along Ukraine’s eastern border. 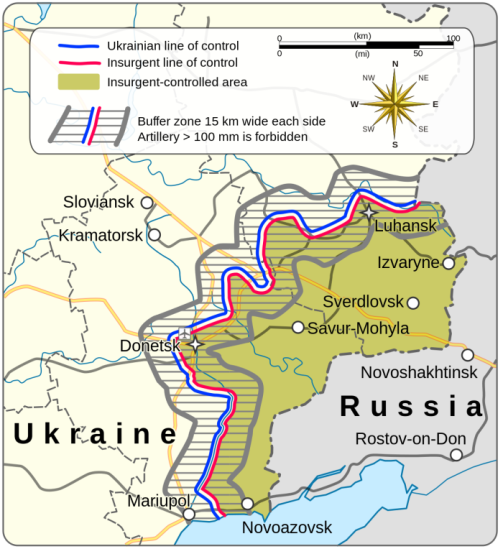 Map of the buffer zone established by the Minsk Protocol during the War in Donbass. (Goran tek-en, CC BY-SA 4.0, Wikimedia Commons)

On that occasion, Ukraine and NATO blinked and called off the offensive. This time around, Russia has again assembled an estimated 90,000 troops near its border with Ukraine. Will Russia once more deter an escalation of the war, or are Ukraine, the United States and NATO seriously preparing to press ahead at the risk of war with Russia?

Since April, the U.S. and its allies have been stepping up their military support for Ukraine. After a March announcement of $125 million in military aid, including armed coastal patrol boats and radar equipment, the U.S. then gave Ukraine another $150 million package in June. This included radar, communications, and electronic warfare equipment for the Ukrainian Air Force, bringing total military aid to Ukraine since the U.S.-backed coup in 2014 to $2.5 billion. This latest package appears to include deploying U.S. training personnel to Ukrainian air bases.

Turkey is supplying Ukraine with the same drones it provided to Azerbaijan for its war with Armenia over the disputed territory of Nagorno-Karabakh in 2020. That war killed at least 6,000 people and has recently flared up again, one year after a Russian-brokered ceasefire. Turkish drones wreaked havoc on Armenian troops and civilians alike in Nagorno-Karabakh, and their use in Ukraine would be a horrific escalation of violence against the people of Donetsk and Luhansk.

The ratcheting up of U.S. and NATO support for government forces in Ukraine’s civil war is having ever-worsening diplomatic consequences. At the beginning of October, NATO expelled eight Russian liaison officers from NATO Headquarters in Brussels, accusing them of spying. Under Secretary of State Victoria Nuland, the manager of the 2014 coup in Ukraine, was dispatched to Moscow in October, ostensibly to calm tensions. Nuland failed so spectacularly that, only a week later, Russia ended 30 years of engagement with NATO, and ordered NATO’s office in Moscow closed. 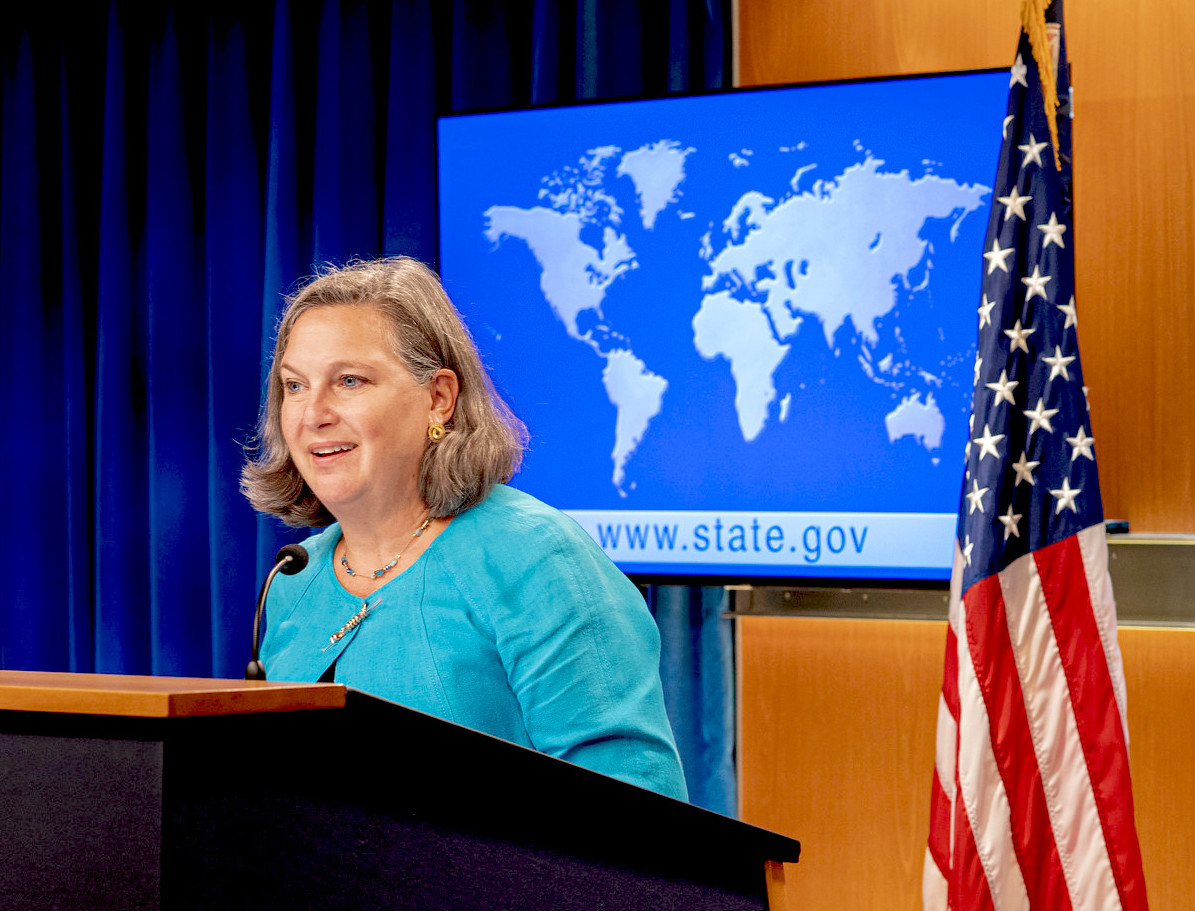 Nuland reportedly tried to reassure Moscow that the United States and NATO were still committed to the 2014 and 2015 Minsk Accords on Ukraine, which include a ban on offensive military operations and a promise of greater autonomy for Donetsk and Luhansk within Ukraine. But her assurances were belied by Defense Secretary Lloyd Austin when he met with Ukraine’s President Zelenskyy in Kiev on Oct. 18, reiterating U.S. support for Ukraine’s future membership in NATO, promising further military support and blaming Russia for “perpetuating the war in Eastern Ukraine.”

More extraordinary, but hopefully more successful, was CIA Director William Burns’ visit to Moscow on Nov. 2 and 3, during which he met with senior Russian military and intelligence officials and spoke by phone with President Putin. 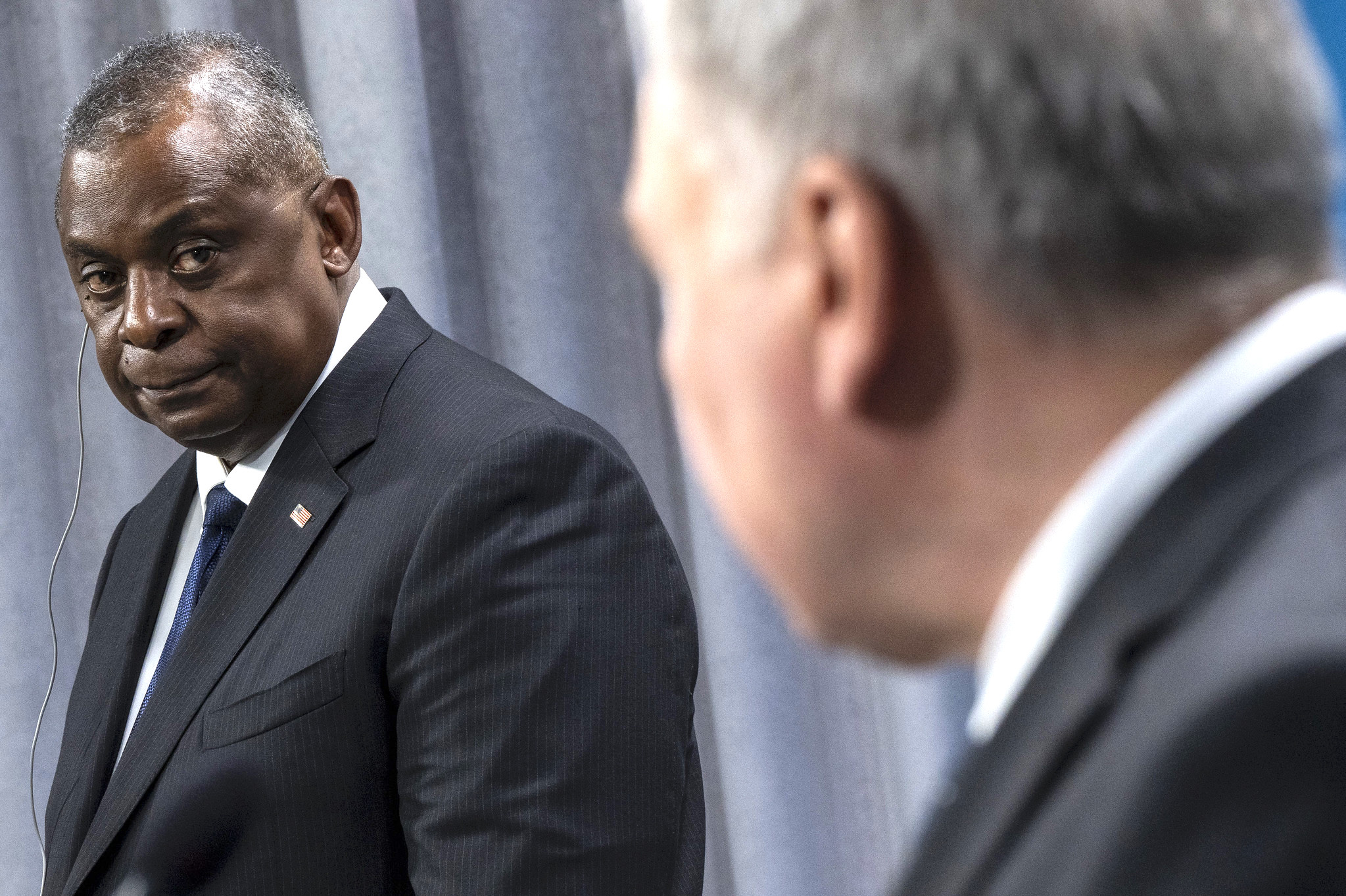 A mission like this is not usually part of the CIA director’s duties. But after Biden promised a new era of American diplomacy, his foreign policy team is now widely acknowledged to have instead brought U.S. relations with Russia and China to all-time lows.

Judging from the March meeting of Secretary of State Blinken and National Security Advisor Sullivan with Chinese officials in Alaska, Biden’s meeting with Putin in Vienna in June, and Under Secretary Nuland’s recent visit to Moscow, U.S. officials have reduced their encounters with Russian and Chinese officials to mutual recriminations designed for domestic consumption instead of seriously trying to resolve policy differences. In Nuland’s case, she also misled the Russians about the U.S. commitment, or lack of it, to the Minsk Accords. So who could Biden send to Moscow for a serious diplomatic dialogue with the Russians about Ukraine?

In 2002, as under secretary of state for near eastern affairs, William Burns wrote a prescient but unheeded 10-page memo to Secretary of State Colin Powell, warning him of the many ways that a U.S. invasion of Iraq could “unravel” and create a “perfect storm” for American interests.

Burns is a career diplomat and a former U.S. ambassador to Moscow, and may be the only member of this administration with the diplomatic skills and experience to actually listen to the Russians and engage seriously with them.

The Russians presumably told Burns what they have said in public: that U.S. policy is in danger of crossing “red lines” that would trigger decisive and irrevocable Russian responses. Russia has long warned that one red line would be NATO membership for Ukraine and/or Georgia. 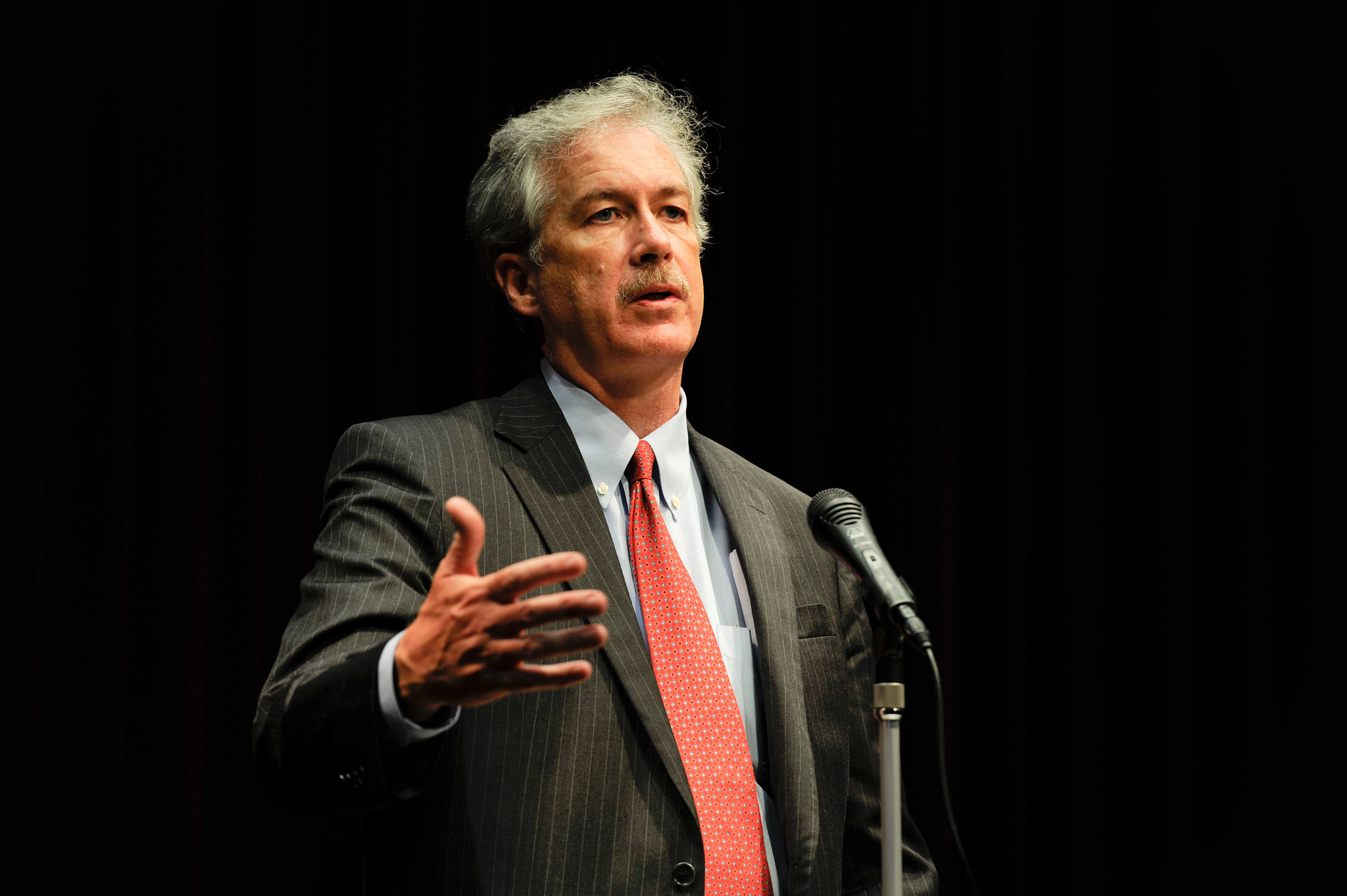 But there are clearly other red lines in the creeping U.S. and NATO military presence in and around Ukraine and in the increasing U.S. military support for the Ukrainian government forces assaulting Donetsk and Luhansk. Putin has warned against the build-up of NATO’s military infrastructure in Ukraine and has accused both Ukraine and NATO of destabilizing actions, including in the Black Sea.

With Russian troops amassed at Ukraine’s border for a second time this year, a new Ukrainian offensive that threatens the existence of the DPR and LPR would surely cross another red line, while increasing U.S. and NATO military support for Ukraine may be dangerously close to crossing yet another one.

So, did Burns come back from Moscow with a clearer picture of exactly what Russia’s red lines are? We had better hope so. Even U.S. military websites acknowledge that U.S. policy in Ukraine is “backfiring.”

Russia expert Andrew Weiss, who worked under William Burns at the Carnegie Endowment for International Peace, acknowledged to Michael Crowley of The New York Times that Russia has “escalation dominance” in Ukraine and that, if push comes to shove, Ukraine is simply more important to Russia than to the United States. It therefore makes no sense for the United States to risk triggering World War III over Ukraine, unless it actually wants to trigger World War III.

During the Cold War, both sides developed clear understandings of each other’s “red lines.” Along with a large helping of dumb luck, we can thank those understandings for our continued existence. What makes today’s world even more dangerous than the world of the 1950s or the 1980s is that recent U.S. leaders have cavalierly jettisoned the bilateral nuclear treaties and vital diplomatic relationships that their grandparents forged to stop the Cold War from turning into a hot one.

Presidents Dwight Eisenhower and John F. Kennedy, with the help of Under Secretary of State Averell Harriman and others, conducted negotiations that spanned two administrations, between 1958 and 1963, to achieve a partial Nuclear Test Ban Treaty that was the first of a series of bilateral arms control treaties. By contrast, the only continuity between Trump, Biden and Under Secretary Victoria Nuland seems to be a startling lack of imagination that blinds them to any possible future beyond a zero-sum, non-negotiable, and yet still unattainable “U.S. Uber Alles” global hegemony.

But Americans should beware of romanticizing the “old” Cold War as a time of peace, simply because we somehow managed to dodge a world-ending nuclear holocaust. U.S. Korean and Vietnam War veterans know better, as do the people in countries across the global South that became bloody battlefields in the ideological struggle between the United States and the U.S.S.R. 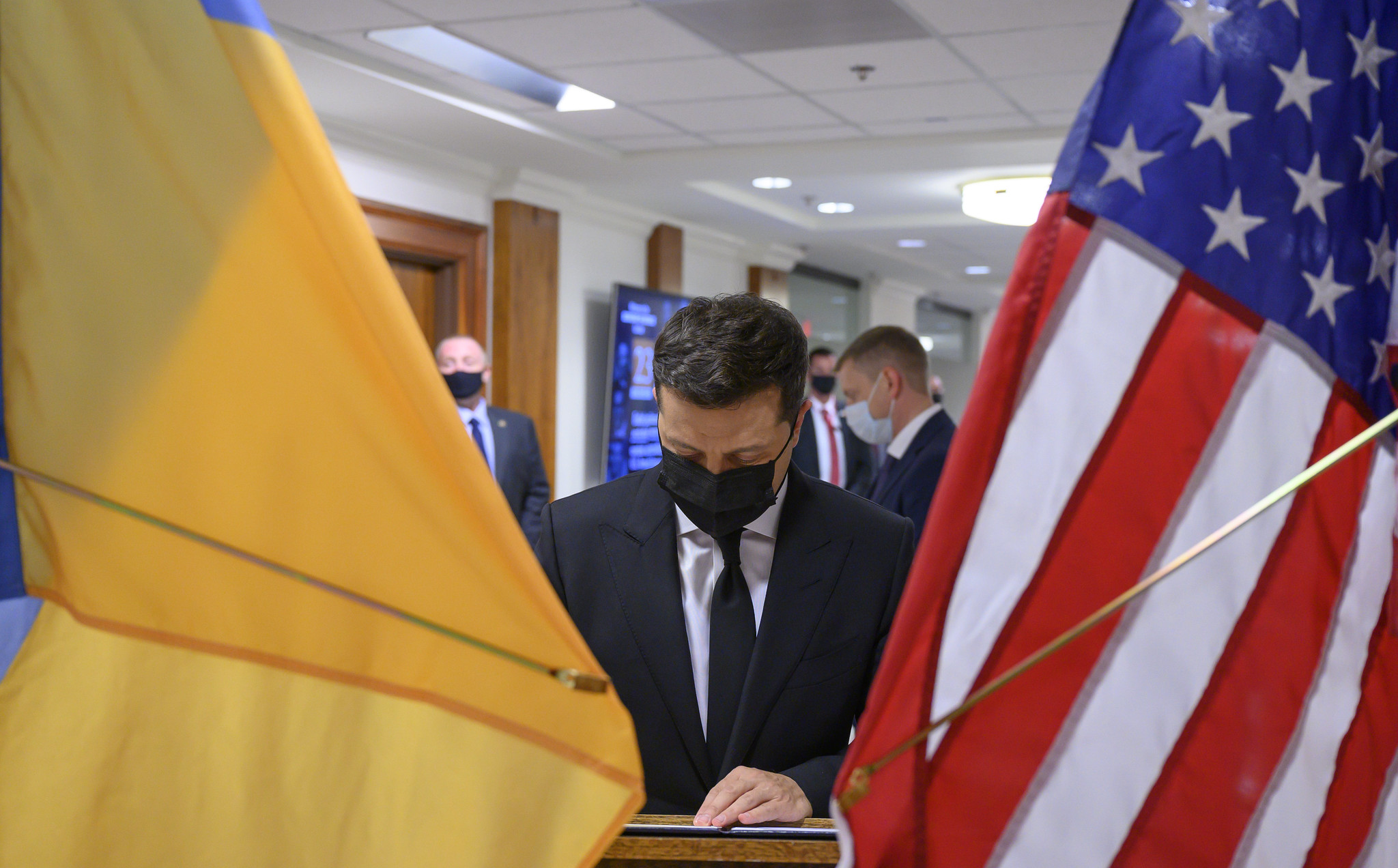 Three decades after declaring victory in the Cold War, and after the self-inflicted chaos of the U.S. “Global War on Terror,” U.S. military planners have settled on a new Cold War as the most persuasive pretext to perpetuate their trillion-dollar war machine and their unattainable ambition to dominate the entire planet. Instead of asking the U.S. military to adapt to more new challenges it is clearly not up for, U.S. leaders decided to revert to their old conflict with Russia and China to justify the existence and ridiculous expense of their ineffective but profitable war machine.

But the very nature of a Cold War is that it involves the threat and use of force, overt and covert, to contest the political allegiances and economic structures of countries across the world. In our relief at the U.S. withdrawal from Afghanistan, which both Trump and Biden have used to symbolize the “end of endless war,” we should have no illusions that either of them is offering us a new age of peace.

Quite the contrary. What we are watching in Ukraine, Syria, Taiwan and the South China Sea are the opening salvos of an age of more ideological wars that may well be just as futile, deadly and self-defeating as the “war on terror,” and much more dangerous to the United States.

A war with Russia or China would risk escalating into World War III. As Andrew Weiss told the Times on Ukraine, Russia and China would have conventional “escalation dominance,” as well as simply more at stake in wars on their own borders than the United States does.

So what would the United States do if it were losing a major war with Russia or China? U.S. nuclear weapons policy has always kept a “first strike” option open in case of precisely this scenario.

The current U.S. $1.7 trillion plan for a whole range of new nuclear weapons therefore seems to be a response to the reality that the United States cannot expect to defeat Russia and China in conventional wars on their own borders.

But the paradox of nuclear weapons is that the most powerful weapons ever created have no practical value as actual weapons of war, since there can be no winner in a war that kills everybody. Any use of nuclear weapons would quickly trigger a massive use of them by one side or the other, and the war would soon be over for all of us. The only winners would be a few species of radiation-resistant insects and other very small creatures.

Neither Obama, Trump nor Biden has dared to present their reasons for risking World War III over Ukraine or Taiwan to the American public, because there is no good reason. Risking a nuclear holocaust to appease the military-industrial complex is as insane as destroying the climate and the natural world to appease the fossil fuel industry.

So we had better hope that CIA DIrector Burns not only came back from Moscow with a clear picture of Russia’s “red lines,” but that President Biden and his colleagues understand what Burns told them and what is at stake in Ukraine. They must step back from the brink of a U.S.-Russia war, and then from the larger Cold War with China and Russia that they have so blindly and foolishly stumbled into.

6 comments for “The US-Russia Confrontation Over Ukraine”