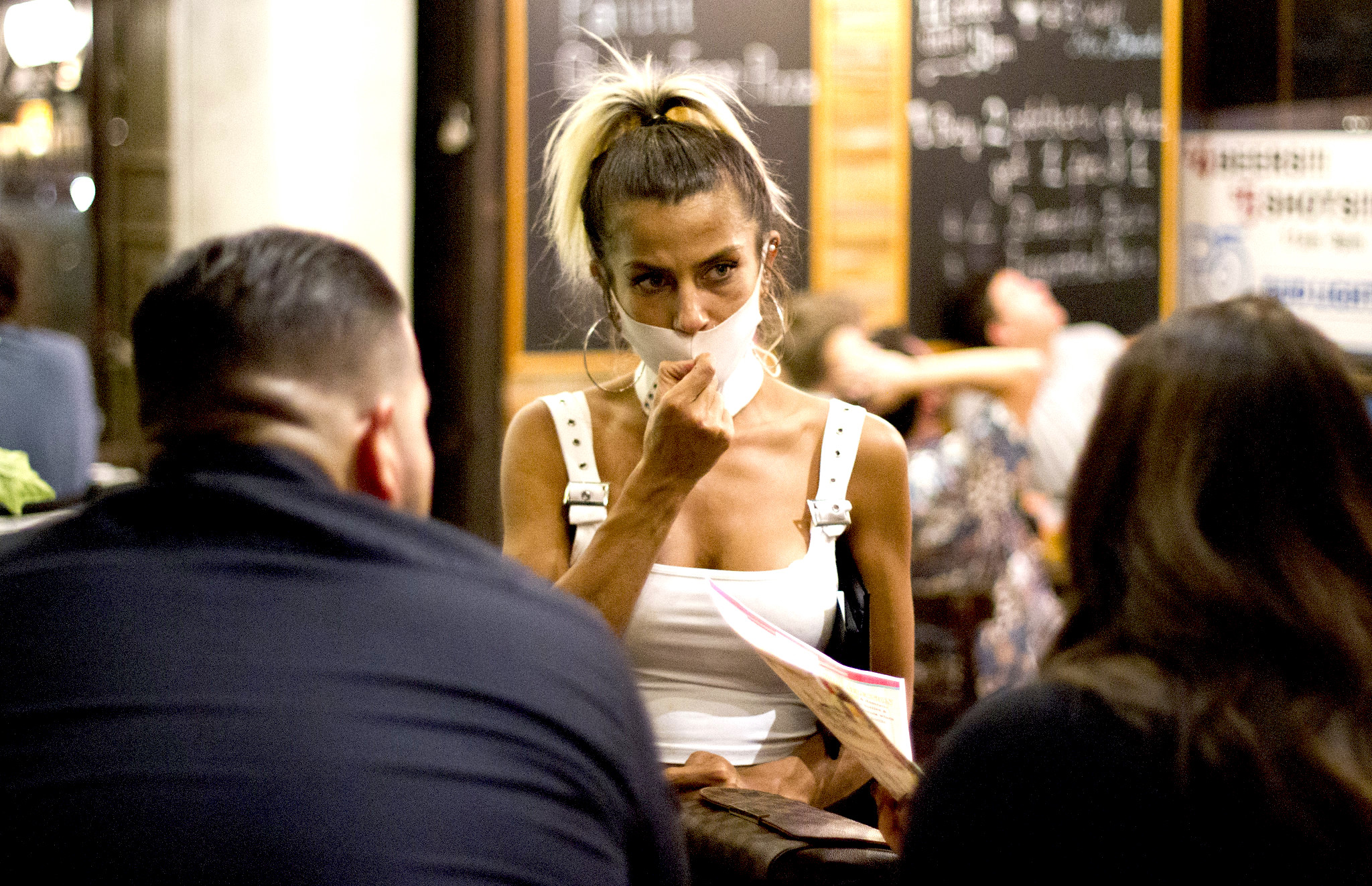 As the economy gradually melts down into levels of deprivation and drudgery not seen in decades, working people are subjected to a chorus of misinformation from liberal sources.

E. J. Dionne is a columnist for The Washington Post. Speaking on WBUR of National Public Radio on Nov. 8, he applauded the work of the Biden administration with regard to job numbers in October. He cited the standard Bureau of Labor Statistics (BLS) measure which is U-3.

The BLS reported that the unemployment rate in October fell to 4.6 percent. That would be a cause for applause if it was remotely accurate. It certainly is not.

“The job market added a stunning 531,000 jobs last month. The unemployment rate ticked down to 4.6%-a new pandemic-era low.”

John Cassidy, a journalist writing in The New Yorker on Nov. 5, asserted that:

“Employment gains were particularly strong in restaurants and bars, which added nearly a hundred and twenty thousand jobs.”

To be sure, jobs in the restaurant industry increased and many saw their wages raised to $15 an hour.

Cassidy praised the job growth in that industry which appeared to be an accomplishment for the Biden administration. Fifteen dollars an hour was an improvement on decades of poverty wages.

However, a brief review of the cost-of-living in various areas of the country leads to the conclusion that $15 an hour is scarcely enough for working people to live with the basic necessities.

Restaurants operate on paper-thin profit margins and traditionally have relied on low-paid, temporary labor of students or those who hold second jobs. If this is the industry that measures our economic health, rather than manufacturing, then there are serious problems with our economic model. 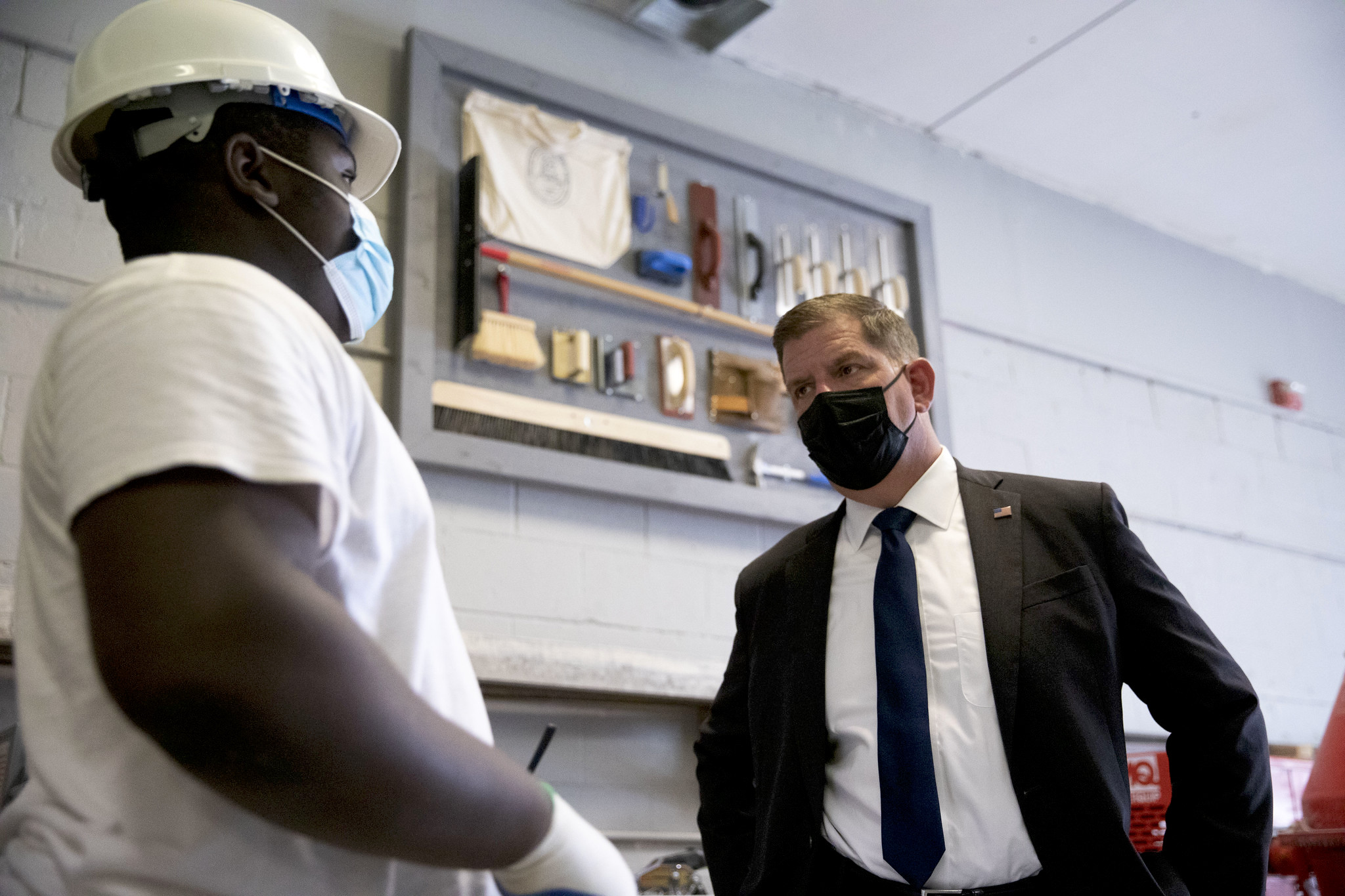 The BLS calculation most cited for unemployment is the aforementioned U-3. It includes:

People without a job who have actively searched for a job in four weeks prior to the survey and currently available for work. People are considered employed if they did paid work, full time, part time and temporary work.

The U-3 does not include:

Marginally Attached—discouraged job seekers who searched for work in the last 12 months and stopped looking in the past four weeks for various reasons.

Part Time — those who want full time work or are underemployed for economic reasons.

Part Time — those who have part time jobs for non-economic reasons.

The BLS created a more accurate calculation in 1994 identified as U-6. It consists of the standard U-3 measure plus marginally attached workers and those working part time for economic reasons.

The Ludvig Institute for Shared Economic Prosperity (LISEP) reported a more accurate calculation of the unemployed in America.

LISEP tracked the percentage of the U.S. labor force that does not have a full-time job (35 plus hours a week) but wants one, has no job, or does not earn a living wage, conservatively pegged at $20,000 annually before taxes.

Shadow Government Statistics, (SGS) is also an alternative economics website.  SGS calculated the seasonally-adjusted employment rate by including long-term discouraged employees who were defined out of existence in 1994. Their  actual total unemployment rate in September was 25.1 percent. 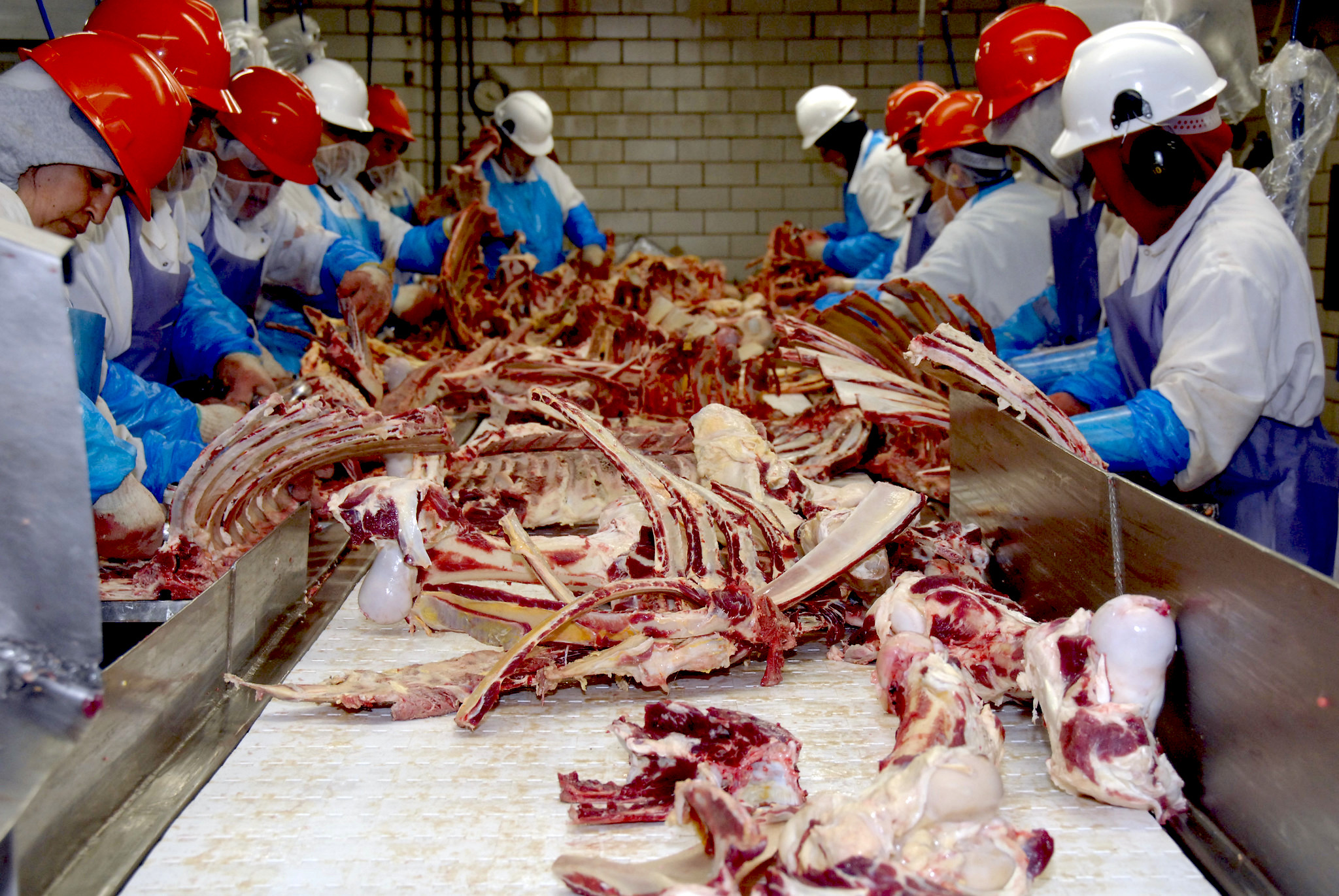 The BLS reported in its first monthly calculation that 531,000 jobs were created. Superficially, this appears to be an improvement since the economy was crippled by the scourge of Covid-19.

Liberal praise was lavished on the Biden administration for these job creation numbers. However, the types of jobs being created was the most important variable not examined in the calculation.

Our economic model is replete with jobs based on low pay, low benefits, or no benefits.

National surveys report that the vast majority of Americans are struggling with financial burdens that are not ameliorated by the new jobs created in recent years.

Bankrate reported in July 2021 that one half of Americans could not pay three months of emergency spending.

MagnifyMoney reported in February 2020 that 53 percent of those polled live paycheck-to-paycheck and 62 percent don’t have at least three months of savings to hold them over.

Lending Club reported in July that 54 percent of consumers are living paycheck-to-paycheck. Twenty one percent are struggling to pay their bills.

Career Builders reported in April that 34 percent of women and 45 percent of black Americans leaving the workforce accepted a pay cut to become employed again.

The Stacker reported in 2019 that the share of American adults who live in middle-income households decreased from 61 percent in 1971 to 51 percent.

Underemployment is another persistent problem in the U.S. economic model. The Center for Law and Social Policy (CLSP) released a report in August 2020 based on recalculated BLS numbers. CLSP’s more inclusive numbers revealed a part-time underemployment rate double the BLS numbers.

The numbers plainly show that our economic model is failing to provide sustainable and permanent jobs for the vast majority of the workforce.

Whether the Biden administration’s recent job creation numbers affect the chronic, systemic unemployment and underemployment remains to be determined. The historical record is against it.

The mainstream corporate media is a key component in dispensing misinformation. The plan is simple. Keep working people distracted from the structural problems in our economic model.

Rather, trot out the usual convenient scapegoats to blame. Those would be “immigrants,” “minorities,” “big government”  and “labor unions.”

There is overwhelming evidence that none of the above are responsible for an economy that is gradually shredding the lives of working people:

Immigrants contribute to the economy in many positive ways.

Minorities are suffering the most since the economy began its most recent decline during Covid-19.

Sizable government is essential to maintain and protect the many components of our complex society. Businesses cannot compete without modern transportation, roads, technology, and data security provided by federal spending. Healthcare, childcare, education and family stability are also essential for businesses.

More importantly, the federal government has historically rescued our economic model from its inherent crises.

Lastly, labor unions benefit the economy for all working people and enjoy more support now than they have garnered in many years. 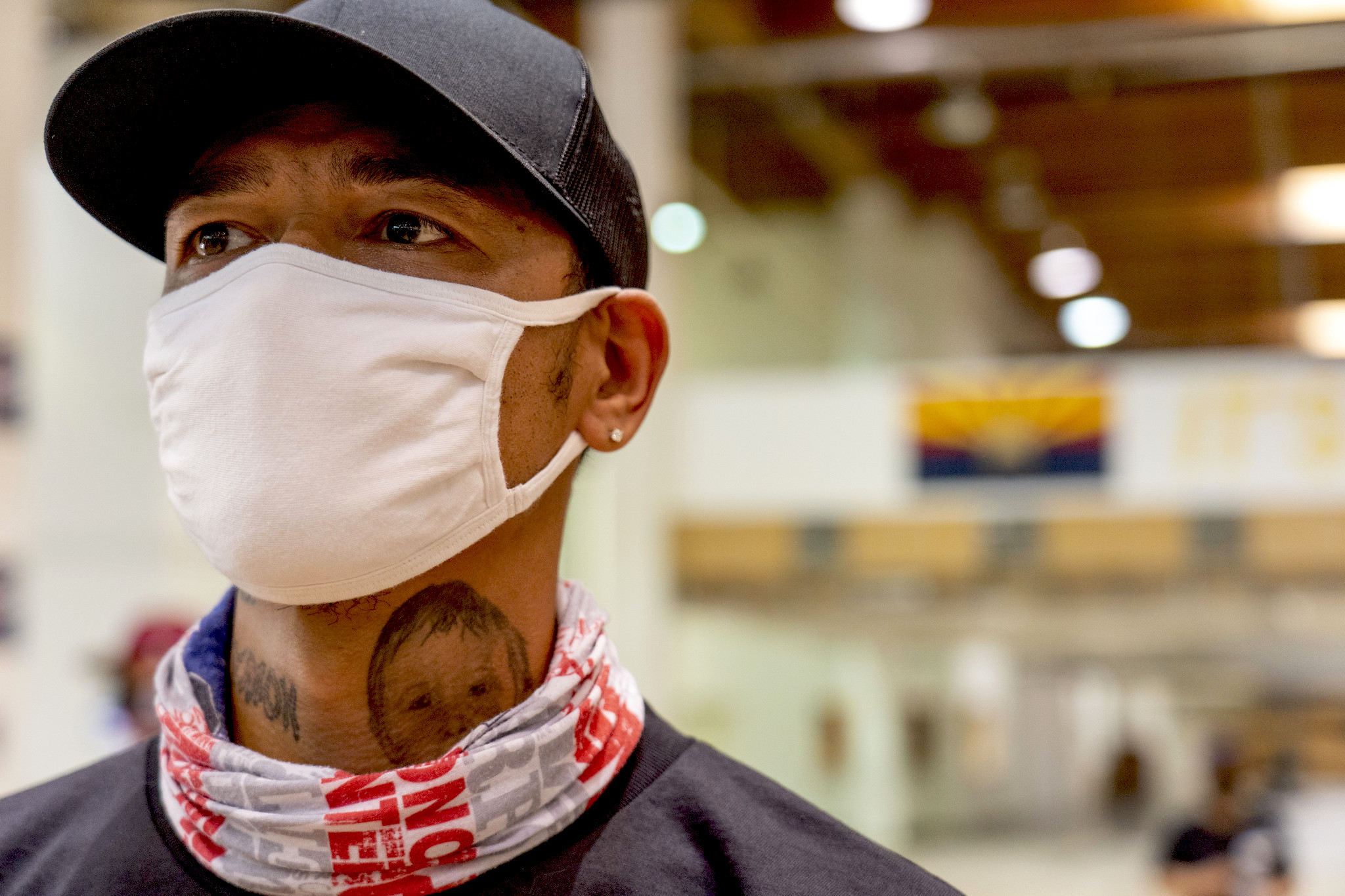 Union member listening to U.S. Secretary of Labor Marty Walsh during a visit at Carpenters Local 1912 in Phoenix in August. (U.S. Department of Labor, Flickr)

The prevailing narrative of scapegoats gains currency largely due to the mainstream corporate media. Add to that the relentless and repetitive pack of disinformation distributed by rightwing media at a breathtaking pace. There are approximately 1,500 conservative talk radio stations across the country relentlessly that keep working people marinated in disinformation.

The Columbia School of Journalism reported in July 2020 that Nexstar and Sinclair, companies with a profoundly conservative perspective, now own the majority of television stations in the country.

The employment numbers above are testament to the continuing decline of our economic model. A progressive model must be developed to disabuse working people of the destructive path ahead; neo-fascism appears to be closer as a political reality here than imagined in prior decades.

Spiritual and secular entities that oppose the serpentine plans of the controlling class must continue to speak, write and distribute facts. Connect the dots. Facts do matter.

Working people of all races and ethnicity have common interests that transcend the narrow self-defeating prism of identity politics. It is a racket designed to keep working people divided and voting against their own economic interests. Sanctimonious rhetoric about “freedom” and “rights” disingenuously preys on patriotic instincts of working people while robbing them at the same time.

Beneath the noise and confusion today is the unalterable reality that our economic model will continue to proceed as it must until working people figure it out politically and decide that enough deprivation and suffering is enough.

22 comments for “A Chorus of Misinformation About US Employment”