A secret dossier prepared by Shin Bet failed to link the six organizations directly or indirectly to any violent activity, writes Marjorie Cohn. 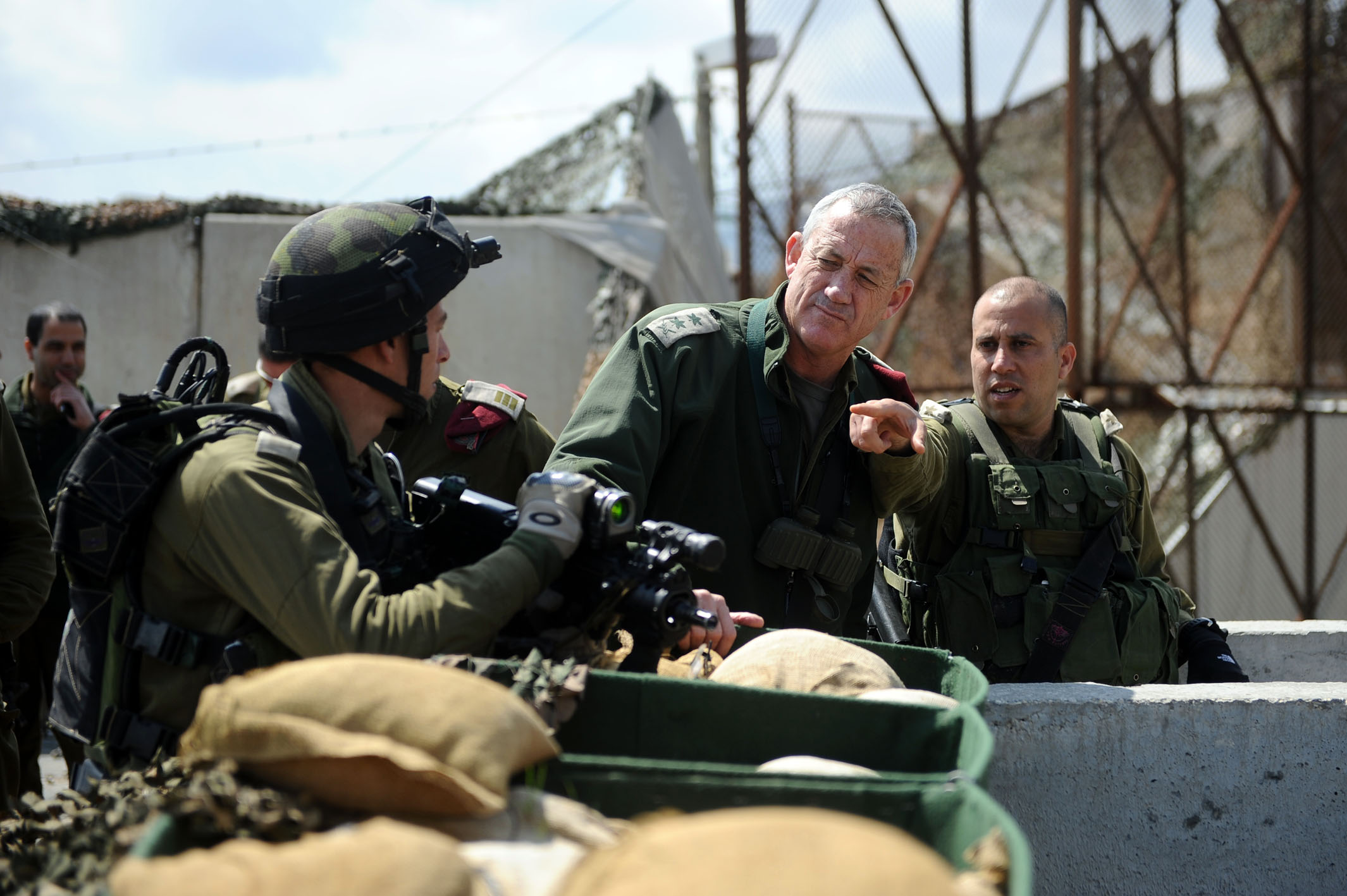 In an effort to cut off the financial lifelines of six of the most prominent Palestinian human rights groups, the state of Israel has baselessly designated them as “terrorist” organizations.

On Oct. 22, Israeli Defense Minister Benny Gantz announced that Israel will henceforth officially consider the six groups — Addameer Prisoner Support and Human Rights Association, Al-Haq, Bisan Center for Research and Development, Defense for Children International–Palestine, the Union of Agricultural Work Committees and the Union of Palestinian Women’s Committees — as “terrorist organizations,” attempting to link them to the Popular Front for the Liberation of Palestine (PFLP). The PFLP is a leftist Palestinian political party with a military wing.

Israeli leaders have targeted the groups due to their support of the International Criminal Court’s (ICC) investigation of Israeli war crimes as well as the Boycott, Divestment, Sanctions movement against the illegal Israeli occupation.

When Israeli officials endeavored to present secret evidence of the supposed “terrorist” affiliations of the six organizations, they were utterly unable to do so. Israel’s action provoked outrage from international human rights experts and observers, who have depicted the move as an attack on human rights defenders and the Palestinian human rights movement.

The Center for Constitutional Rights warned that the targeted organizations “now face possible mass arrest and being shut down by the Israeli government, and anyone identifying with the groups can also be subject to imprisonment, according to Israel’s draconian 2016 counterterrorism law.”

But a 74-page secret dossier prepared by Shin Bet, Israel’s internal security force, failed to link the six groups directly or indirectly to the PFLP or any violent activity at all. The dossier was classified but was widely distributed by Israel to European countries and members of the U.S. Congress and congressional staff.

“Israel is targeting us to silence us, and affect our important work in defending Palestinian human rights, and trying to seek accountability and justice,” wrote Sahar Francis, who is general director of Addameer Prisoner Support and Human Rights Association, in an email to Truthout. “They are targeting us because we can prove they are committing grave violations of international humanitarian law and international human rights law.”

Addameer provides legal support for Palestinian prisoners, documents arrests and administrative detentions, and works to end torture and other violations of prisoners’ rights.

On March 3, former ICC Chief Prosecutor Fatou Bensouda announced that the court had launched a formal investigation into war crimes committed in the West Bank, including East Jerusalem and the Gaza Strip since Israel’s 2014 Operation Protective Edge. Gantz was head of the Israeli military when it killed 2,200 Palestinians, including at least 1,492 civilians, 437 of them children. Gantz later bragged that he had sent Gaza “back to the Stone Age.” 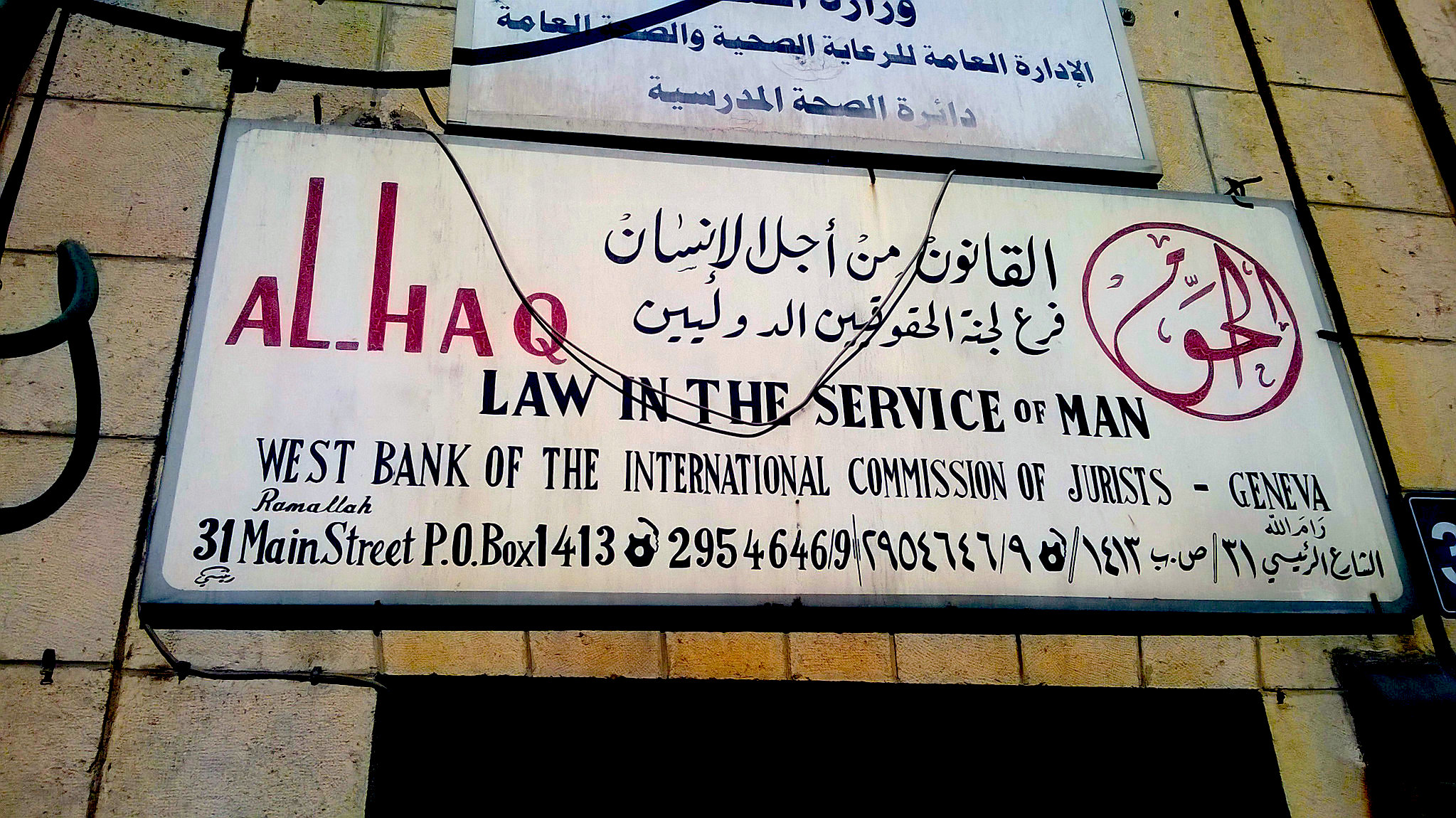 Al-Haq is the leading Palestinian human rights organization seeking accountability for Israeli crimes in the ICC. Shawan Jabarin, director of Al-Haq, said his organization “crossed the red line” when it provided assistance to the ICC’s investigation of Israeli war crimes.

“It all starts and ends with the fact that these organizations are seen as promoting a boycott of Israel and the investigation of war crimes at the International Criminal Court. The attack on them is a political one under the guise of security.”

Al-Haq Director Jabarin also noted the irony of the “terrorist” designation. “Gantz says we are a terror organisation, when he himself is a war criminal,” he told Haaretz.

Journalist Jonathan Cook put it this way: “The reality is that Israeli leaders are conflating their own terror at being held to account for their crimes with an imagined ‘terrorism’ being waged by lawyers and researchers trying to show the reality of occupation.”

Israel announced its terrorist designation of these groups just days before it announced the construction of more than 3,000 new Jewish-only settlements in the illegally occupied West Bank. This was an apparent attempt to mute criticism of its illegal transfer of its own civilians into occupied Palestinian territory.

The Union of Agricultural Work Committees has played a critical role in confronting illegal Israeli settlement expansion and theft of Palestinian farmers’ land. It advocates for sovereignty over natural resources in the face of the climate crisis and promotes sustainable farming.

Defense for Children International-Palestine is the only Palestinian human rights organization dedicated to the rights of children. It investigates, documents and exposes human rights violations against children in Israeli military detention, and provides legal services for them.

Lastly, the Bisan Center for Research and Development is a community resource that develops youth programs and helps Palestinians assert their socioeconomic rights. 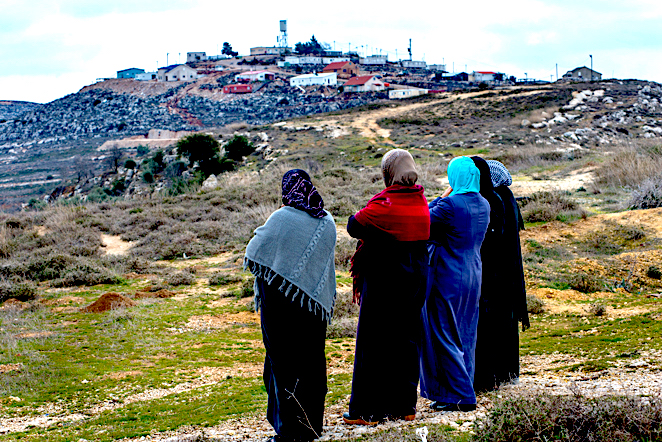 “The primary target of these designations is an attempt to ‘starve’ Palestinian rights groups by cutting off access to their funding,” said Charlotte Kates, who is the international coordinator of the Samidoun Palestinian Prisoner Solidarity Network, in an interview with Truthout. Israel designated Samidoun a “terrorist” organization in February.

In an effort to convince European countries to stop financing the organizations, Israel sent the security force Shin Bet’s dossier to representatives of at least seven countries and the European Union in May 2021. In at least five of those countries, senior officials said the dossier contained no “concrete evidence,” and that they would thus continue to fund the organizations in question. The Dutch foreign minister and the Belgian economic development minister publicly stated the dossier did not contain “even a single concrete piece of evidence.”

Local Call, +972 and The Intercept obtained the classified Shin Bet dossier, together with hundreds of pages of Hebrew summaries of Shin Bet and Israeli police interrogations of Palestinian accountants Amro Hamuda and Said Abdat, who had worked for a different Palestinian human rights organization.

Abdat endured 32 interrogations, sometimes for 22 hours straight. He was subjected to the “shabah” position, where his legs were tied and his hands were bound behind his back, causing severe pain. Labib Habib, Abdat’s attorney, said his client fainted several times and Shin Bet interrogators then poured water on him and refused to provide medical treatment. They threatened to arrest his wife and family.

Tal Steiner, executive director of the Public Committee Against Torture in Israel, noted that those interrogation practices may constitute torture. Israel’s Supreme Court has banned the use of family members to apply psychological pressure, which could amount to psychological torture.

The European Union rejected Israel’s attempt to use the dossier to cause it to end its support to the targeted groups. An EU spokesperson said that, 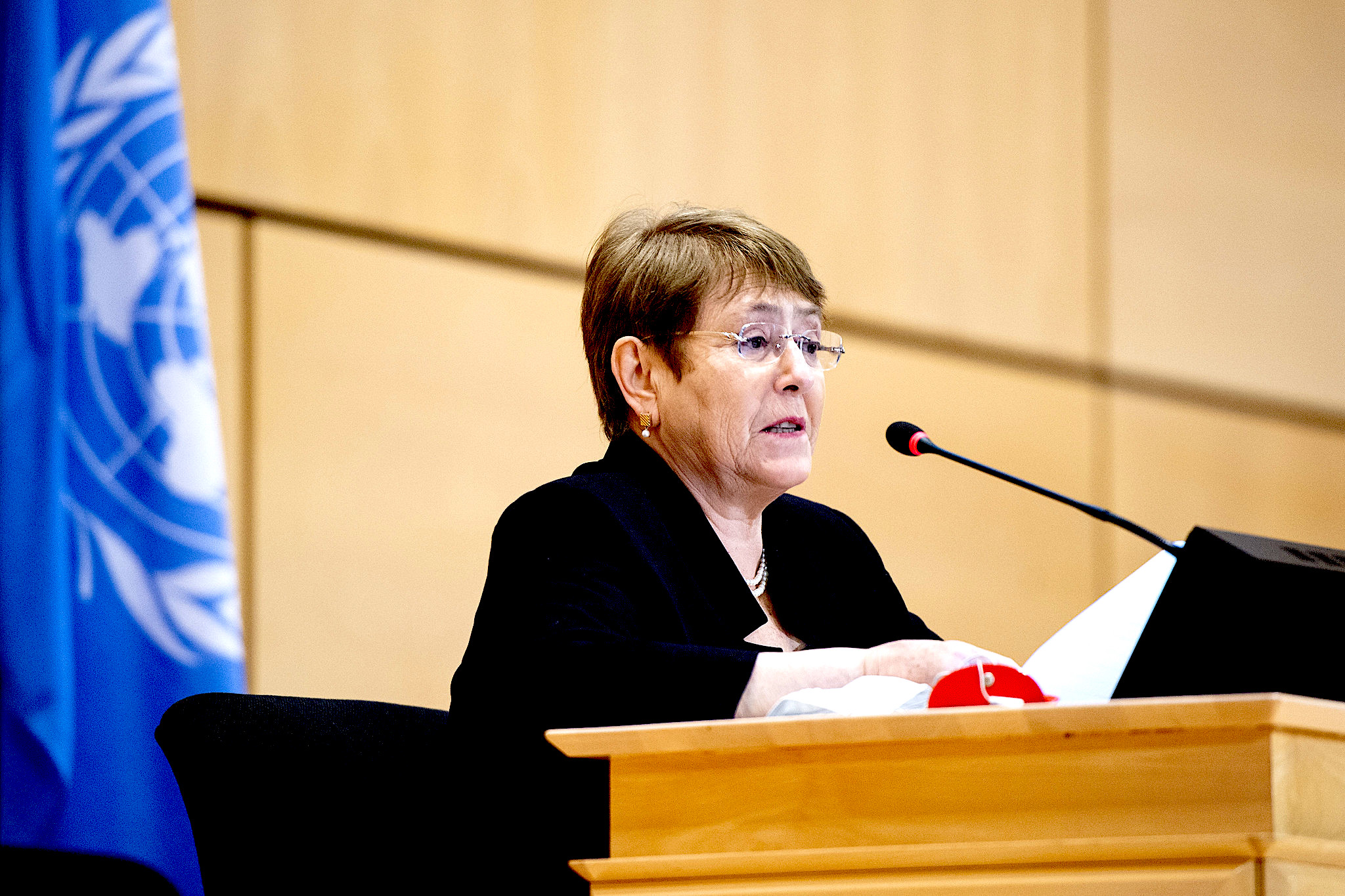 Michelle Bachelet at a 2020 session of the Human Rights Council. (UN Geneva, Flickr)

UN High Commissioner for Human Rights Michelle Bachelet condemned Israel’s decision, calling it “an attack on human rights defenders, on freedoms of association, opinion and expression and on the right to public participation,” and said it “should be immediately revoked.” Bachelet stated that the targeted groups were “some of the most reputable human rights and humanitarian groups in the occupied Palestinian territory and for decades have worked closely with the UN.”

Twenty-five Israeli human rights organizations signed a statement of support for the targeted Palestinian groups, saying, “Documentation, advocacy, and legal aid are fundamental activities for the protection of human rights worldwide. Criminalizing such work is an act of cowardice, characteristic of repressive authoritarian regimes. Civil society and human rights defenders must be protected. We stand in solidarity with our Palestinian colleagues, and call on members of the Israeli government and the international community to oppose this decision unequivocally.”

Ten Palestinian Christian organizations that are globally recognized “condemn and denounce in the strongest possible terms” Israel’s terrorist designation of the six groups. They urged churches, governments and human rights organizations throughout the world “to reject and condemn this decision” and “to pressure Israel to revoke the decision, and to continue to support the right of Palestinians to justice, freedom and dignity.”

Amnesty International and Human Rights Watch, who work with some of the targeted groups, issued a joint statement that said, “This appalling and unjust decision is an attack by the Israeli government on the international human rights movement. For decades, Israeli authorities have systematically sought to muzzle human rights monitoring and punish those who criticize its repressive rule over Palestinians…. The decades-long failure of the international community to challenge grave Israeli human rights abuses and impose meaningful consequences for them has emboldened Israeli authorities to act in this brazen manner.”

Samidoun Palestinian Prisoner Solidarity Network International Coordinator Kates noted that the designations are also an act of settler colonialism. “Fundamentally, it’s important to remember that the entire instrument of Israel’s ‘terrorist list’ is a project of a colonial environment that aims to criminalize all forms of Palestinian resistance, rebellion or refusal, from taking up arms to fight for freedom, to filing a lawsuit or organizing farmers and women.”

According to international law, the Palestinians have a legal right to resist Israel’s illegal occupation, including by the use of armed struggle. A 1982 resolution of the UN General Assembly “reaffirmed the legitimacy of the struggle of peoples for independence, territorial integrity, national unity and liberation from colonial and foreign domination and foreign occupation by all available means, including armed struggle.”

Israel could not illegally occupy Palestinian lands and commit war crimes against the Palestinians without the annual $3.8 billion per year the United States provides in military assistance. The U.S. government “therefore holds a unique obligation to speak out against and condemn actions by the Israeli Government that intentionally undermine democratic values and internationally recognized human rights,” states a resolution introduced by Rep. Betty McCollum (D-Michigan), urging the House of Representatives to condemn Israel’s terror designation of the six groups.

A broad coalition of more than 300 U.S.-based social justice, human rights and civil rights organizations wrote a letter to Secretary of State Antony Blinken “to demand that [he] immediately and unequivocally condemn” the Israeli government’s terrorist designations.

“The work of these groups does not have to be hampered, and the designations can be rolled back,” Samidoun’s Kates says. “The best way to confront these designations is to support Palestinian prisoners, Palestinian children, Palestinian women and Palestinian farmers in their quest to liberate Palestine and bring colonization and apartheid to an end.”