The 16-point declaration was released amid the UN climate meeting in Glasgow and as Biden and Xi prepare for a virtual meeting expected next week.

Campaigners at global advocacy groups on Wednesday welcomed a surprise joint statement from the U.S. and Chinese governments about “enhancing climate action in the 2020s” while also calling on both countries to actually deliver on their promises.

The 16-point declaration was released as elected officials, business representatives, and activists continued to debate policy at a United Nations climate summit in Glasgow, Scotland — and as U.S. President Joe Biden and Chinese leader Xi Jinping prepare for a virtual meeting expected next week.

“It’s always welcome news when the world’s two biggest emitters cooperate on climate change, and a reset of their relationship on this crucial issue is overdue,” Greenpeace International executive director Jennifer Morgan said in a statement about the declaration. 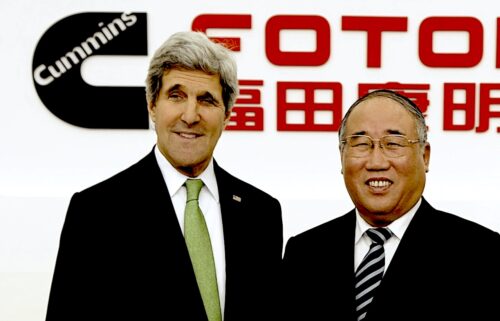 The climate envoys from the U.S. and China — John Kerry, left, and Xie Zhenhua — shown together in 2014. (State Department)

Referencing the more ambitious Paris agreement temperature target that is guiding COP26 in Glasgow, she said that “the climate crisis will only be solved if the U.S. and China move toward the same goal of bringing emissions down in line with a 1.5°C trajectory as a matter of urgency.”

“Their statement recognizes that the 1.5°C goal is at the heart of any credible climate plan and they frame the 2020s as the decade where we need to see real action,” Morgan continued. “Those things matter, especially from these two countries. But ultimately their statement falls short of the call by the climate-vulnerable countries demanding that nations come back to the table every year with greater ambition until the 1.5°C gap is closed.”

As Common Dreams reported Tuesday, a new analysis projects the planet will hit 2.4°C above pre-industrial levels by the end of the century even if all current emissions targets for 2030 are fully implemented, bolstering the case for more ambitious action on a global scale.

“it’s good to see these two at the table together, but if this reset is going to turn into a genuine breakthrough that builds confidence around the world, then they need to step up their level of ambition and their commitment to implementation. And that needs to start in Glasgow, where every country should be using the last two days of these talks to get the deal the world needs.”

Manish Bapna, president and CEO at the Natural Resources Defense Council (NRDC), responded similarly to the U.S.-China statement, which touched on everything from the global renewable energy transition to addressing emissions from agriculture and stopping deforestation.

“It’s good news that the U.S. and China agreed to accelerate climate action and ambition in this decisive decade,” said Bapna. “The pledge to strengthen cooperation on clean energy, methane, and deforestation from the two largest economies and greenhouse gas emitters is a welcome step forward.”

“But if we are to hold global warming to 1.5°C,” the NRDC leader added, “we urgently need to see commitments to cooperate translate into bolder climate targets and credible delivery.”

U.N. Secretary-General António Guterres also celebrated the major polluters’ joint statement Wednesday, tweeting that “tackling the climate crisis requires international collaboration and solidarity, and this is an important step in the right direction.”

China’s top climate change envoy, Xie Zhenhua, apologized as he entered late for a weekend meeting at the United Nations climate summit.
“I have to meet with John Kerry almost every day,” he said.

According to the BBC:

“China’s top climate negotiator Xie Zhenhua told reporters that on climate change ‘there is more agreement between China and U.S. than divergence.’

There were steps agreed on a range of issues including methane emissions, the transition to clean energy, and decarbonization.

But China refused to join an agreement earlier this week to limit methane — a harmful greenhouse gas. The agreement was signed by nearly 100 other countries. China has instead pledged to develop a ‘national plan’ to address methane.”

The two nations “have no shortage of differences, but on climate, cooperation is the only way to get this job done,” said John Kerry, the U.S. climate envoy, speaking after Xie. “Every step matters right now and we have a long journey ahead of us.”

US Special Envoy for Climate John Kerry tells the COP26 summit the US and China will work together to lower greenhouse gas emissions because “cooperation is the only way to get this job done”. pic.twitter.com/jR6JIy4tGS

The show of cooperation comes after Biden, while in Glasgow last week, criticized Xi’s decision to skip COP26. A spokesperson for the Chinese foreign ministry had swiftly fired back.

The statement also comes as all major polluters are under growing pressure from campaigners in Glasgow and beyond to not only make bolder commitments at the conference but also return home and enact policies that meet the scale and urgency of the climate emergency.

“The richest have ignored every moral and political call to do their fair share. Their broken promises are littered across 26 COPs,” declared Asad Rehman, executive director of the anti-poverty group War on Want, during a speech Wednesday.

“Whilst we are frustrated and angry, we are not without hope,” added Rehman, who is also a spokesperson for the climate justice COP26 Coalition. “We know it’s ordinary people who change history—and we will change history.”