The regime’s mouthpiece, Al-Watan, simply said that the president forgave him for “all that he had done,” writes As`ad AbuKhalil.

Without much fanfare in Syrian regime media or international coverage, the uncle of Bashshar Al-Asad, Rifaat, returned to Damascus this week.

The man facing four years in prison on corruption charges fled to Syria where the regime’s mouthpiece, Al-Watan,simply said that the president forgave him for “all that he had done.”

If only Syrian political prisoners could be forgiven that easily.

Rifaat played a very important — and bloody — role in the history of Syria and Lebanon, especially after 1970, when his brother, Hafiz, seized power in what became the last coup — thus far — in Syrian contemporary history.  Syria faced three coups d’etat in 1949 alone but the ruthlessness of Hafiz and his brother Rifaat ended the succession of coups that had entrenched the current regime.  The Syrian Ba’ath Party set up a virtual school in coup prevention.

I remember Rifaat when I was a boy in Lebanon. He was dressed in a white suit when he dropped by our mountain home in Sawfar and presented a gift to my father, an AK-47.

By the early 1970s, Rifaat was already a feared man in both Lebanon and Syria; his mere name would send chills down people’s spines.  Here is a man whose name was associated with murder, kidnapping, and grand theft of people’s properties.  He was younger than Hafiz but his brother relied on him for enforcement:  he used force to protect the regime from internal threats and to crush internal rebellion when needed.  There were many stories told about Rifaat in my childhood and youth and they all revolved around his free lifestyle and his brutality. 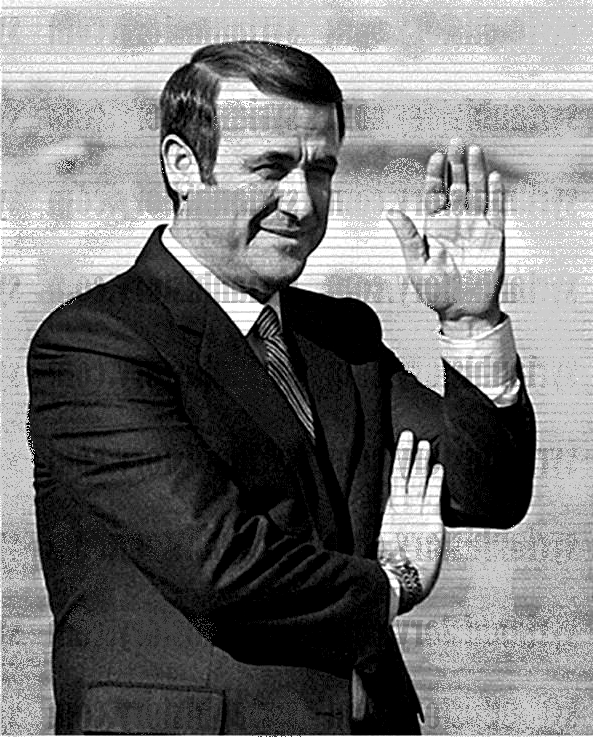 He rose though the ranks of the Syrian Army only because his brother became the ruler (Hafiz was also a defense minister before seizing power in 1970).  Hafiz ruled through a variety of family and sectarian connections: he did not even trust members of his own party; his rule was characterized by a narrow sectarian-familial base which the historian Hanna Batatu, among others, wrote about.

Hafiz grew up in the era of coups and counter coups, and he himself participated in a few, and crushed many later on.  His background prepared him to rule a coup-proof regime.  Rifaat formed his own 40,000 strong private army-militia: the Defense Detachments (Saraya Ad-Difa`).

Its power and intimidation extended throughout both Syria and Lebanon.  Rifaat moved freely between the two countries before the 1975 civil war because he was closely aligned with the administration of President Sulayman Franjiyyah in Lebanon (1970-1976).   The Asad and the Franjiyyah families had established close relations ever since 1958, when Sulayman fled Lebanon and sought shelter with the Asads, after perpetrating a massacre in his hometown, Zghorta.

Sulayman was a wanted man for a few years but then — typical of Lebanese politics — all was forgiven and he returned to Lebanon to become an MP, a minister and in 1970 president in the most hotly contested presidential election in Lebanese history.  Rifaat had business ties with Sulayman’s eldest son, Toni, and both allegedly traded in drugs. (Toni would later be assassinated in 1978 at the hand of the Lebanese Forces militia, which was led by Bashir Gemayyel — a bitter foe of Damascus).

Rifaat’s political role grew over the years. His rank within the Syrian Army rose, and he was a commander of a privileged private army within the regime — no rules applied to his praetorian guards. The rules that applied to the Defense Detachments were the whims of Rifaat and the needs of the regime for security.

If the regime of Hafiz felt insecure in its early years, Rifaat would move his army to wherever it was needed in the country.  He also carefully cultivated an image as an intellectual, military commander.  Rifaat founded an association for university graduates to pose as the sponsor of Syrian intellectuals. He claimed the title of a Dr. after securing a PhD degree from a university in Moscow. (The Syrian people know the name of the Syrian academic who wrote it for him, and the published version of his dissertation in Arabic is filled with mistakes: one cited source lists Johns Hopkins University Press as the publisher, but the writer assumes that Johns Hopkins is the living author).

Rifaat’s forays into Lebanon started in the early 1970s.  His forces would enter Lebanon without passing through the customs section at the Syrian-Lebanese border.  His henchmen were notorious for their thuggery, and Hafiz relied on him to chase and gun down opponents of the Syrian regime in Lebanon.

Rifaat’s wealth grew with his business connections in Lebanon.  There were several kidnappings and assassinations that were blamed on him including the kidnapping and torture of the Lebanese journalist Michel Abu Jawdah in 1974.  Long before the military intervention of the Syrian army in 1976, Rifaat Al-Asad and his Defense Detachments imposed a rule of terror inside Syria and Lebanon.

Hafiz Al-Asad allowed his brother to deal with various security matters provided no one interfered with the management of the armed forces.  Unlike Hafiz, Rifaat did not live an austere life. He enjoyed what Lebanon offered in terms of the high life and extravagance.  He was known for his preference for Mercedes cars, and Lebanese police started receiving reports of the most expensive models of Mercedes being stolen. 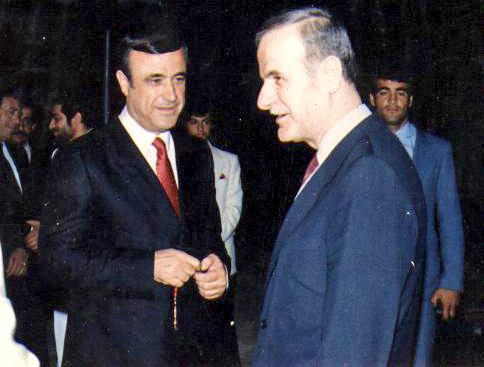 Rifaat quickly became the No. 2 man in the Syrian regime although his proximity to Hafiz was his real source of power.  Hafiz put close relatives — all Alawites — in the key posts of government.  Rare were the Sunnis who were trusted by Hafiz to hold sensitive positions in the army or intelligence services (his buffoonish Minister of Defense Mustafa Tlas was loyal but never wielded real power).

The civil war in Lebanon in 1975, boosted the political fortunes of Rifaat.  He created his own Lebanese militia which quickly became notorious for its thuggery and resort to murder and extortion to achieve its goals.  Members of his militia were known for lack of discipline and for relying on brute force to get their way.

Rifaat was a figure in the civil war although he never set policies.  He knew the limitations of his mission and left all decision-making powers to his brother.  Hafiz was not one to share formulating decisions  with anyone — his brothers and relatives included.

Rifaat proved his usefulness to the regime in 1979, when he was instructed by Hafiz to put down the insurrection in the city of Hama.  Close to 10,000 people were killed and the city suffered major destruction.  The revolt of the Muslim Brotherhood was crushed, but human rights organizations documented the human toll.  Rifaat’s name became closely associated with the Hama massacre, although nothing happened in Syria without the approval and orders of Hafiz. 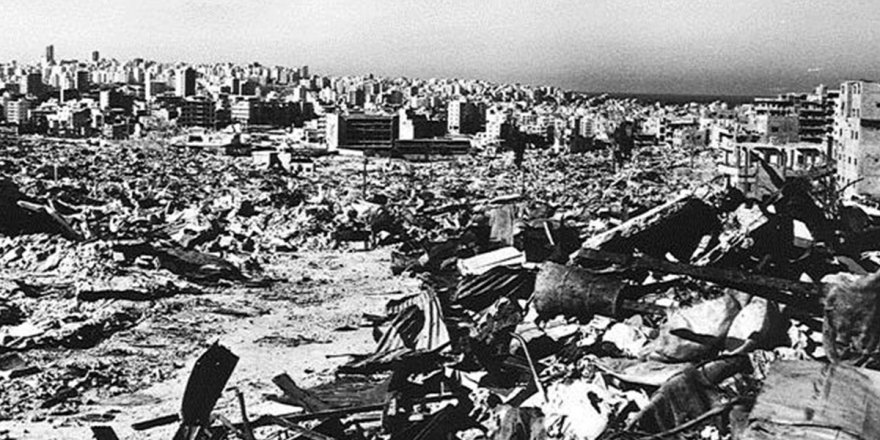 The relationship between the two brothers continued to be close and there were no hints of a rivalry prior to 1983, when Hafiz suffered a heart attack, which considerably weakened his physical condition.  It was then that Rifaat revealed his political ambition and his power grew to the point of challenging the ruler of Syria.

For two years, Syrians were nervous watching two power centers clashing over the control of the country.  In 1984, Hafiz was able to settle the dispute with Rifaat in a direct confrontation between them (in a scene described in graphic details by Patrick Seale in his biography of Asad).  Rifaat was expelled from the country and not allowed to return.

Rifaat established his base in Europe and enjoyed Saudi largesse: he was the brother-in-law of Prince (later King) Abdullah.  It was also said that Rifaat was allowed to leave Syria with his millions.  He started a small media empire and posed as an advocate for democracy.  He did not have a power base inside Syria and Hafiz picked his son Bashshar to succeed him (his favorite eldest son, Basil, died in a car crash in 1994).

Rifaat lived the high life in France and allegedly received Saudi and Libyan money to fund his operations.  The recent French ruling against him accused him of corruption and yet he was not bothered and was allowed to leave the country freely.

The return of Rifaat ends a chapter in the bloody history of Syria but those old enough will remember that his contributions are measured in blood and destruction.

7 comments for “THE ANGRY ARAB: Rifaat Al-Asad Returns to Syria”