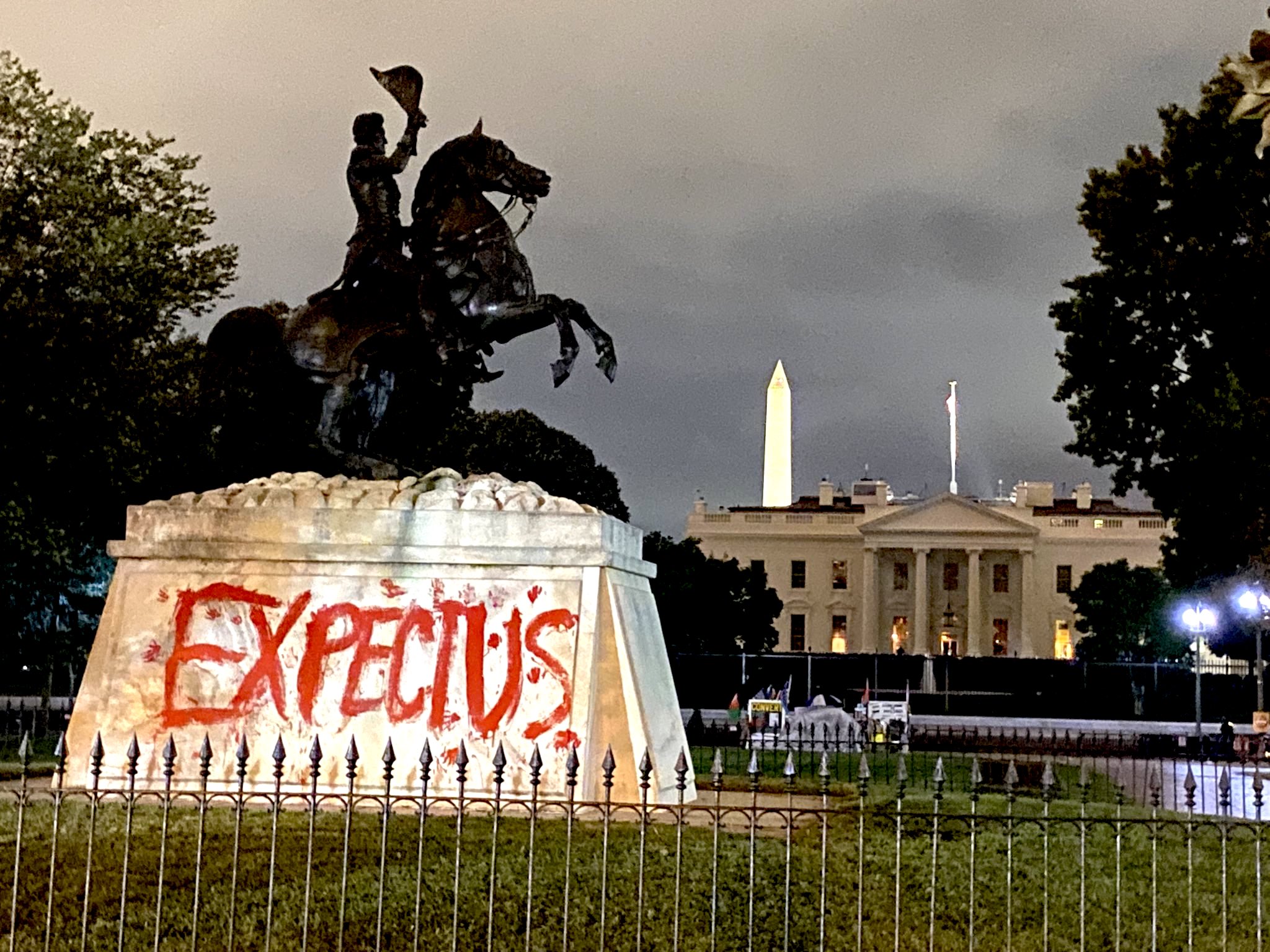 Message to President Joe Biden painted on the pedestal of a statue of Andrew Jackson, the U.S. president known to Cherokees as “Indian Killer,” ahead on the Oct. 11 Indigenous People’s Day fossil fuel protests. (Jennifer K. Falcon, Twitter)

More than 130 Native American Earth protectors were arrested in Washington, D.C. on Monday, while others were blasted with sonic weaponry as tribal leaders and members from across the continent they call Turtle Island gathered on Indigenous Peoples’ Day to protest Enbridge’s Line 3 pipeline and other oil and gas ventures. The projects are backed by President Joe Biden and the protestors called on his administration to halt all fossil fuel projects and declare a climate emergency.

Thousands of Indigenous-led demonstrators rallied and marched, with hundreds engaging in nonviolent civil disobedience outside the White House as a week of #PeopleVsFossilFuels climate action kicked off.

Ahead of Monday’s march, protesters painted “Expect Us” on the pedestal of a statue in Lafayette Park opposite the White House of Andrew Jackson, the genocidal seventh U.S. president known to Cherokees as “Indian Killer” — and a favorite of former President Donald Trump.

Indigenous Environmental Network tweeted video footage of police using a Long-Range Acoustic Devices (LRAD) against demonstrators sitting defiantly but peacefully outside the White House fence. Some observers contrasted the deployment of so-called “sound cannons” against nonviolent Indigenous protesters both on Monday and during past #StopLine3 protests with the absence of such heavy-handed tactics during the deadly Jan. 6 attack on the U.S. Capitol by a mostly white mob.

?? They have used the LRAD on Indigenous Elders, Water Protectors, and their allies on Indigenous Peoples’ Day ?? pic.twitter.com/LaRsQRiyhV

Some critics decried Biden — the first president to officially commemorate Indigenous Peoples’ Day, and the first to appoint a Native American to his Cabinet — for allowing the arrest of Indigenous protesters at Monday’s demonstration. Others took aim at the chasm between the president’s climate promises and his administration’s fossil fuel-friendly actions.

Sapa Win had a message for Biden: “If you’re claiming to be a leader for our climate crisis, to come up with solutions to our issues here, then you need to start living up to your word.”

The Secret Service handcuff an Indigenous women who is on the ground and crying out: “I don’t want to die!”

Siqiñiq Maupin, executive director of Sovereign Iñupiat for a Living Arctic, told The Washington Post at Monday’s protest that thousands of her people have become some of the first U.S. climate refugees, as a dozen villages must relocate to drier ground. She also said that people around her village are developing rare cancers and asthma, and need medication to help them breathe.

“People are dying right now from the pollutants, the toxins, the climate catastrophes that are happening, and we have to stop the harm,” Maupin said, adding that Biden’s election was “riding on climate change, his entire election on people of color, Indigenous people. But when it really comes to when it matters, our lives are still being sacrificed for oil and gas.”

The Andrew Jackson statue at the @WhiteHouse was redecorated! Today is #IndigenousPeoplesDay but don’t get it twisted, colonization is not over. Native ppls are still fighting settler violence via fossil fuel extraction across Turtle Island! #PeopleVsFossilFuels pic.twitter.com/ntOIliXATW

The president and his administration have faced backlash from Indigenous and environmental activists for backing the Line 3 tar sands pipeline, a Trump-era Alaska drilling project, and other fossil fuel industry expansion, with critics calling Biden’s actions a “horrible and unconscionable betrayal” of his campaign promises.

Winona LaDuke, founder of the Indigenous-led advocacy group Honor the Earth, told Democracy Now! that “it’s so tragic that, on the one hand, the Biden administration is like, ‘We’re going to have Indigenous Peoples’ Day, but we’re still going to smash you in northern Minnesota and smash the rest of the country.'”

Joye Braun, a member of the Cheyenne River Sioux and anti-pipeline organizer with the Indigenous Environmental Network, said that “Biden has turned a fork-tongue, and he needs to be held accountable to the promises he made to Indigenous nations when we helped elect him.”

Speaking outside the White House, Braun said, “Joe Biden you have been making false promises. You stopped Keystone XL — what about [Dakota Access Pipeline], Line 5, [Mountain Valley Pipeline]? This is Indigenous land. Indigenous peoples will be here for thousands of years. Biden, can you hear us now?”

← A Tribute to the Late Sen. Mike Gravel
THE ANGRY ARAB: Rifaat Al-Asad Returns to Syria →