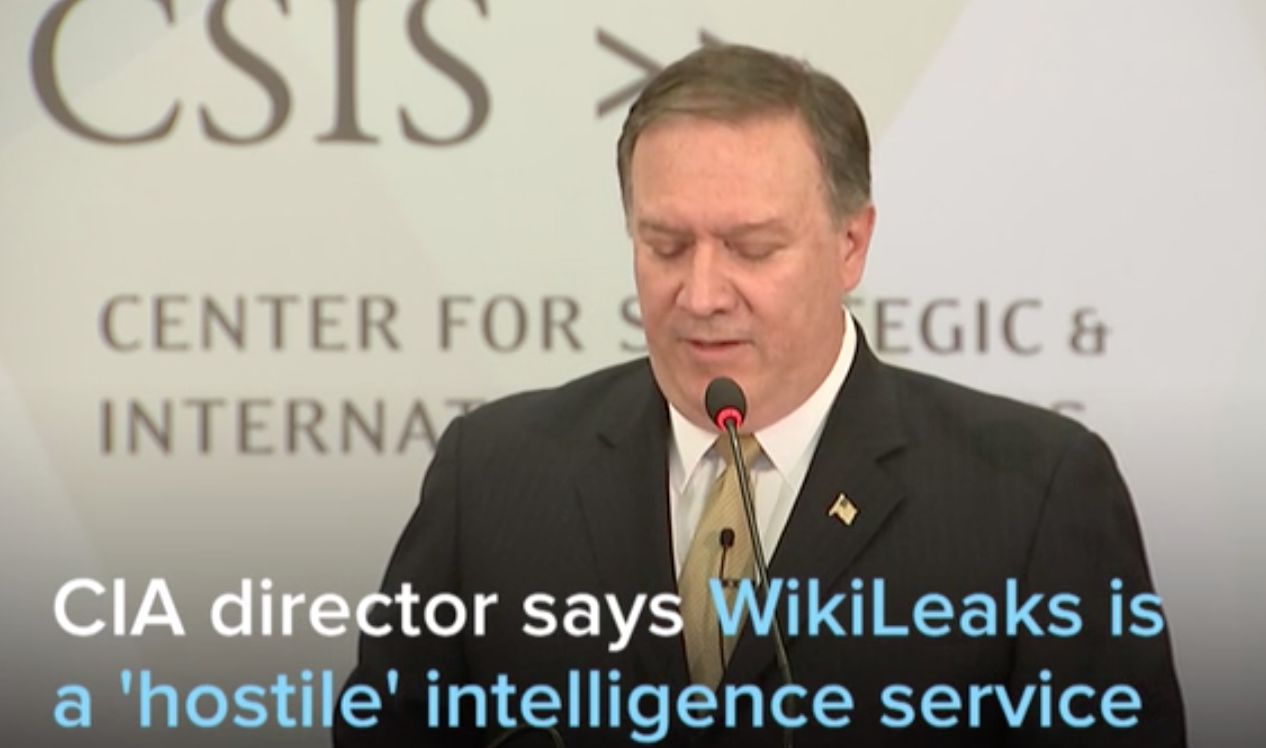 In the process of issuing another not-really-a-denial about a Yahoo News report that the CIA plotted to kidnap, extradite and assassinate WikiLeaks founder Julian Assange in 2017, former CIA director Mike Pompeo said that the 30 former government officials the report was based on “should all be prosecuted for speaking about classified activity inside the Central Intelligence Agency.”

Here are some quotes from the exchange on Pompeo’s recent Megyn Kelly Show appearance courtesy of Mediaite:

Kelly asked Pompeo about the claims.

“Makes for pretty good fiction, Megyn,” said Pompeo. “They should write such a novel.”

He added, “Whoever those 30 people who allegedly spoke with one of these reporters, they should all be prosecuted for speaking about classified activity inside the Central Intelligence Agency.”

“You deny the report?” asked Kelly.

“There’s pieces of it that are true,” said Pompeo. “We tried to protect American information from Julian Assange and Wikileaks, absolutely, yes. Did our justice department believe they had a valid claim which would’ve resulted in the extradition of Julian Assange to the United States to stand trial? Yes. I supported that effort for sure. Did we ever engage in activity that was inconsistent with U.S. law?… We’re not permitted by U.S. law to conduct assassinations. We never acted in a way that was inconsistent with that.”

"Whoever those 30 people [are] who allegedly spoke with one of these reporters, they should all be prosecuted"https://t.co/UWNgmFAvUX

Pompeo’s point that “We’re not permitted by U.S. law to conduct assassinations” is not especially convincing considering how the Trump administration openly assassinated Iran’s top military commander Qassem Soleimani in a drone strike last year, a move which Pompeo supported and defended.

“President Trump and those of us in his national security team are re-establishing deterrence, real deterrence, against the Islamic Republic of Iran,” Pompeo gushed in support of the assassination at the time.

Pompeo’s pseudo-denial is of course further undermined by his position that the former officials who spoke to the press should all be prosecuted for “speaking about classified activity inside the Central Intelligence Agency.” Is it false or is it “classified activity”? It can’t be both. The two things Pompeo admitted to, trying to “protect American information” and working to extradite Assange, are not classified information. The classified information he wants them prosecuted for is therefore something else.

After a lot of flailing and humming and hawing Pompeo does eventually make what sounds like a concrete denial with the curiously-worded phrase “I can say we never conducted planning to violate U.S. law.” But even this wouldn’t be a denial of the claims in the Yahoo News report, because the report is mostly about the intelligence community and the Trump administration trying to find legal loopholes that would allow them to take out Assange.

For example, this quote from the Yahoo News article: “A primary question for U.S. officials was whether any CIA plan to kidnap or potentially kill Assange was legal.” This would in no way be contradicted by Pompeo’s claim that “we never conducted planning to violate U.S. law.” It would mean that there were discussions and plans about assassinating Assange amid conversations and debates about whether it would be legal to do so. The fact that they didn’t plan to violate U.S. law doesn’t mean they didn’t plan to assassinate Assange if they could find a legal loophole for it.

This follows an earlier non-denial by Pompeo of the exact same nature in an interview with conservative pundit Glenn Beck. Pompeo points out that one of the article’s authors was a Russiagater and says of the former officials cited in the report that “those sources didn’t know what we were doing.” But he doesn’t actually deny it.

If Pompeo had not been involved in plots to kidnap, rendition and assassinate Julian Assange, he would have just said so. He wouldn’t have engaged in all kinds of verbal gymnastics to squirm his way out of a difficult question, and he certainly wouldn’t be calling for the criminal prosecution of his accusers for “speaking about classified activity inside the Central Intelligence Agency.”

Mike Pompeo is a literal psychopath. He chuckles about lying, cheating and stealing with the CIA. He defends murderous sanctions and openly admits to using them to foment civil war in empire-targeted nations. He defends assassination. He strongly implied the U.S. would interfere in UK politics if Jeremy Corbyn became Prime Minister. And yet somehow he escaped the Trump administration the mass media so despised with nary a scratch of media criticism on him.

This is because Mike Pompeo, as full of centipedes and demon spawn as his enormous head may be, is highly representative of the mainstream U.S. power establishment. He is the embodiment of the empire’s values. He’s just one of its less-subtle representatives.