As of the end of August, the U.S. has admitted a total of 7,637 refugees, according to the latest figures from the State Department. 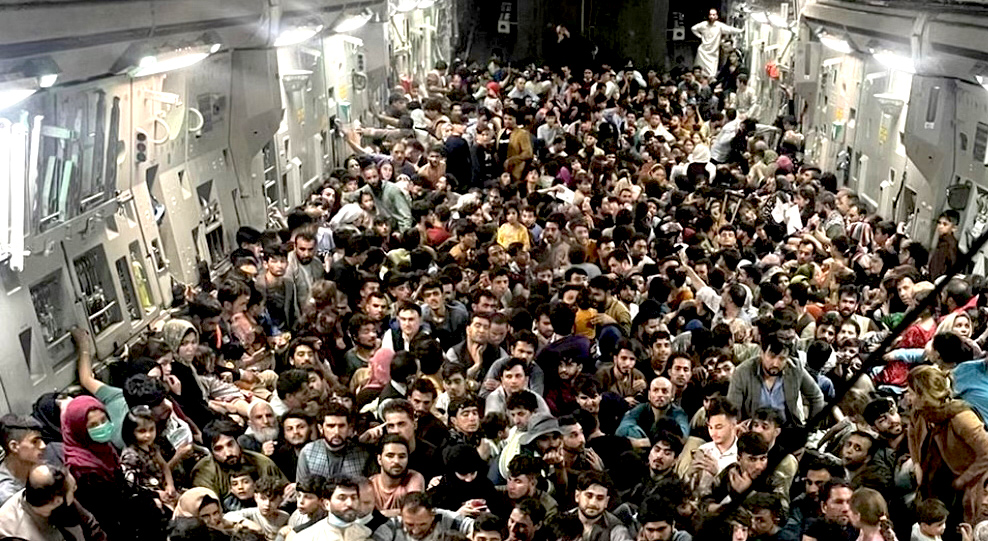 Afghans fleeing Kabul inside a U.S. military flight on Aug. 15. (US Air Force)

In the face of record high global displacement, the U.S. is on track to admit a historic low number of refugees for the fiscal year 2021 — a lower admission rate than his notoriously xenophobic predecessor, Donald Trump.

As of the end of August, according to the latest figures released by the U.S. State Department’s Refugee Processing Center (RPC), the U.S. has admitted a total of 7,637 refugees.

The “paltry” figure, Bill Frelick, director of Human Rights Watch’s Refugee and Migrant Rights division, wrote last week, raises “the prospect that more than 50,000 admissions places could go to waste. At this rate, the Biden administration looks unlikely even to meet the Trump administration’s dismal ceiling.”

“The U.S. had for years outpaced other countries in refugee admissions, allowing millions into the country since the Refugee Act of 1980. But the program took a hit under former President Donald Trump, who slashed the number of refugees allowed to come to the US and put a series of limits in place curtailing who was eligible.

Even so, at its lowest point, nearly 12,000 refugees were admitted under Trump.”

The figures came as the State Department announced Monday that it’s proposing a boost in the refugee cap for the fiscal year 2022, doubling the target from the 62,500 that the Biden administration set for 2021 to 125,000.

That announcement was met with a qualified welcome from human rights organizations like Amnesty International USA.

“At a time when thousands of Afghans have been forced to flee their home to find safety, and Haitians are seeking safety on the southern border,” said the group’s executive director Paul O’Brien, “the very least the United States can do is set a resettlement goal that meets the moment.”

O’Brien called “anything but a robust commitment to humanitarian protections for refugees and asylum-seekers… a dismal failure,” and said his group is urging the administration to take in “at least 200,000 refugees this fiscal year and uphold its legal and moral commitment to allow people to seek asylum.”

According to Krish O’Mara Vignarajah, president and CEO of Lutheran Immigration and Refugee Service, “raising this [refugee admissions] cap without dedicating significant resources, personnel, and measures to streamline the process would be largely symbolic.”

Vignarajah also pointed to a “vital” need for more refugee processing officers, especially in light of the ongoing Covid-19 crisis.

“We have a unique opportunity to build back the refugee program to meet the unprecedented need,” she added, and “with so many lives on the line, we must seize it.”

3 comments for “Biden Set to Admit Fewer Refugees Than Trump”