Caitlin Johnstone: Do you remember seeing an average of 46 news reports a day on bombings conducted by the U.S. and its allies over the last 20 years? I don’t. 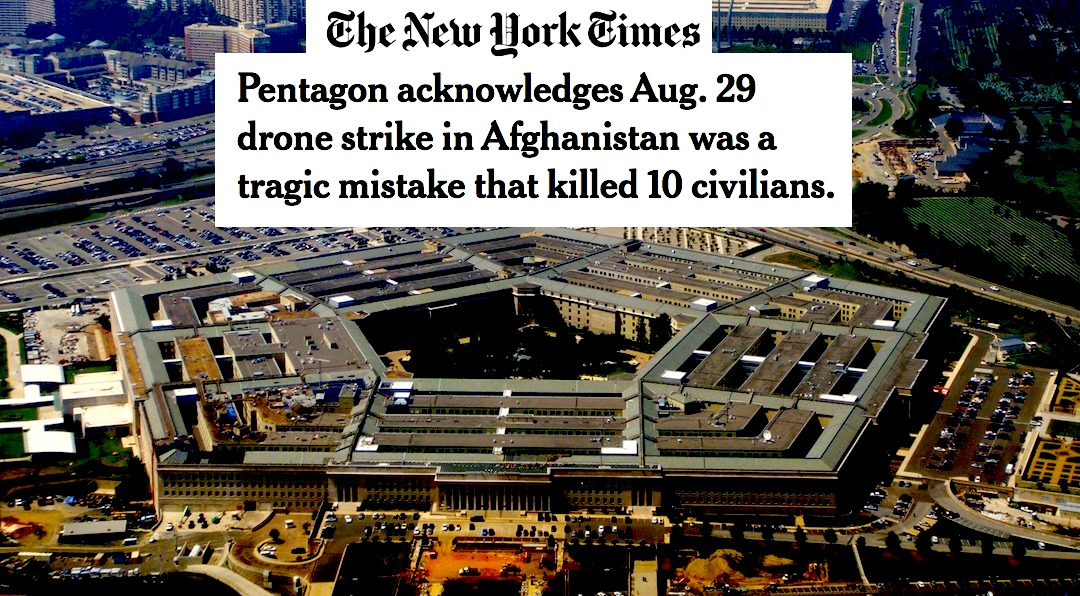 The Pentagon has finally admitted to the long-obvious fact that it killed 10 Afghan civilians, including seven children, in an airstrike in Kabul last month.

In an article with the obscenely propagandistic title “Pentagon acknowledges Aug. 29 drone strike in Afghanistan was a tragic mistake that killed 10 civilians,” The New York Times pats itself on the back for its investigative journalism showing that the so-called ISIS-K facilitator targeted in the strike was in fact an innocent aid worker named Zemari Ahmadi: “The general acknowledged that a New York Times  investigation of video evidence helped investigators determine that they had struck a wrong target. ‘As we in fact worked on our investigation, we used all available information,’ General McKenzie told reporters. ‘Certainly that included some of the stuff The New York Times did.’”

EXCLUSIVE: Twenty years after 9/11, compelling statistical data suggests that the true death toll of the 'War on Terror' is a staggering *6 million people*: which is likely a conservative estimate. I breakdown the data for @BylineTimes https://t.co/YTV6IoZ3ic

“at least 5.8 to 6 million people are likely to have died overall due to the War on Terror – a staggering number which is still probably very conservative.”

It also comes a few months after a Code Pink report found that the U.S. and its allies have been dropping an average of 46 bombs per day in the so-called War on Terror for the last 20 years.

Do you remember seeing an average of 46 news reports a day on bombings conducted by the U.S. and its allies? Do you remember even reading about one single U.S. bombing per day in the mainstream news? I don’t.

The U.S. power alliance has for decades been continuously raining explosives from the sky on impoverished people in the Global South and the mainstream news reported on almost none of those instances, much less launched an in-depth investigation into whether each one killed was who the military claims they were.

The difference between the Aug. 29 airstrike and the thousands which preceded it in America’s post-9/11 wars was that this one was politicized. The Biden administration ordered it to look tough on terrorism after the Kabul airport attack (most of the fatalities from which were probably due to panicked gunfire from U.S. and/or allied troops), amidst a withdrawal for which Biden was being aggressively slammed by plutocratic media outlets eager to paint ending U.S. wars as a bad thing that everyone should oppose.

There was nothing unusual about what the US did in Afghanistan: extinguishing an entire family and then getting friendly NYT & NBC reporters to ratify their lie that they killed terrorists but no civilians – except this time the whole world was watching:https://t.co/WoYpcLBkOp

The Pentagon doesn’t care that it snuffed out innocent lives in an airstrike; it does that all the time and its officials would do it a lot more if that’s what it took to secure their futures as lobbyists, consultants, board members and executives for defense industry corporations after they retire from the military. And the mass media don’t care either; they only cared about this one particular highly politicized airstrike during a withdrawal from a military engagement the mass media vehemently opposed.

“Pentagon acknowledges Aug. 29 drone strike in Afghanistan was a tragic mistake that killed 10 civilians.” Can you believe that headline? Not “admits” but “acknowledges.” Not “killed children while targeting an aid worker based on flimsy evidence” but “was a tragic mistake.” How many times did New York Times editors rewrite this? Imagine if this had been a Russian airstrike.

Think about all the murder victims we’d have known about if the news media had done its job and used their immense resources to investigate them as journalists should over the last 20years. Think about how much harder it would have been for the war machine to inflict these evils upon the world if they had. Instead, it’s been left to obscure bloggers and indie journalists to question these actions using scant resources and shoestring budgets.

Mainstream news organizations have shown that they can do these investigations into the validity of U.S. airstrikes, and they’ve shown that they’ve spent two decades choosing not to. The mass-media-manipulators who provide cover for mass-military-murder by journalistic malpractice and negligence are just as complicit in these depraved acts of human butchery as the people firing the weapons and the officials giving the orders.

11 comments for “Where Was Journalism on US Airstrikes During ‘War on Terror?’”