UPDATED: The new U.S.-U.K-Australia military pact can be seen as a further indication of the nervousness in Washington, London and Canberra over the further decline of Anglo-Saxon power, writes Joe Lauria. 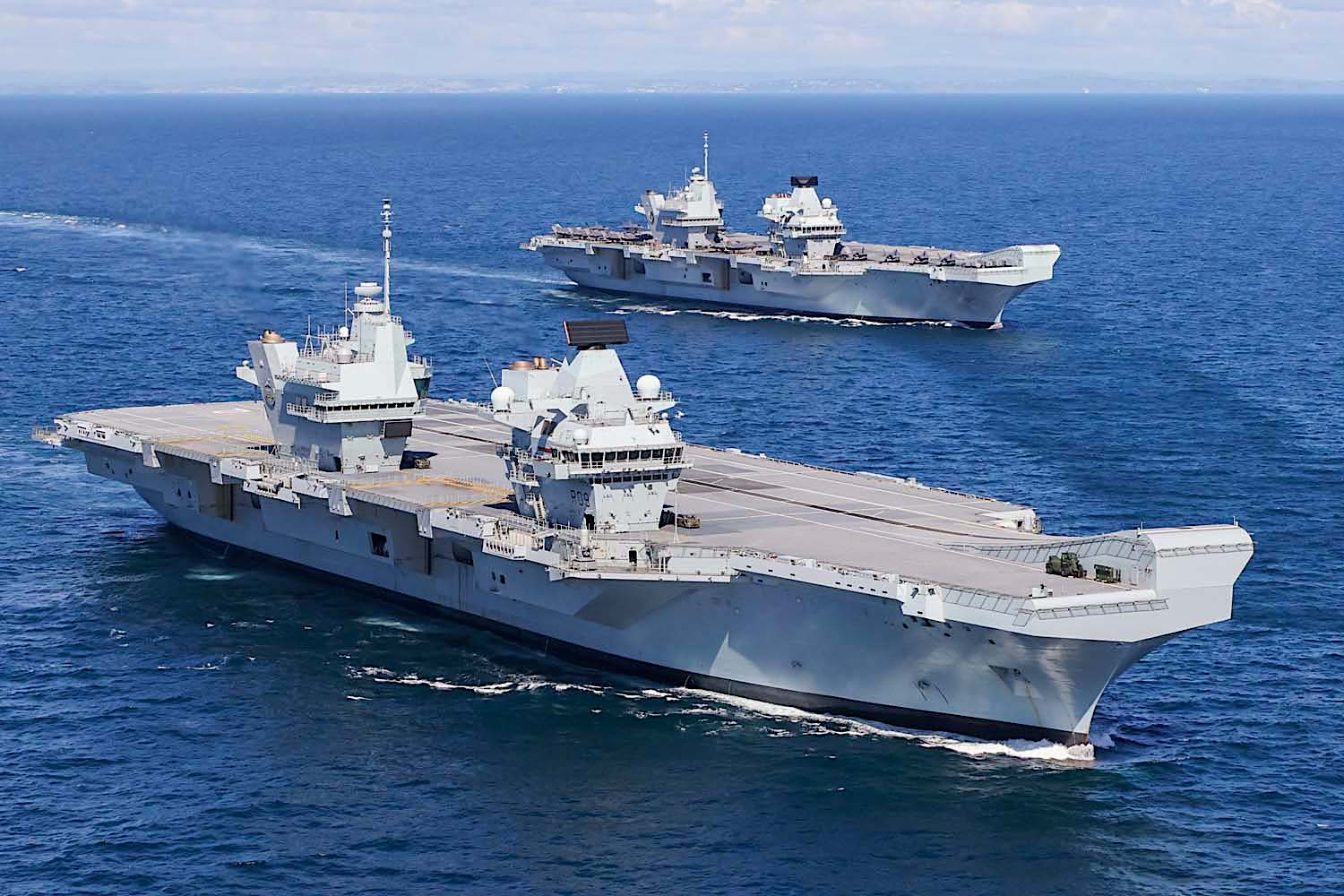 HMS Prince of Wales and HMS Queen Elizabeth pictured at sea for the first time on May 19, 2021. (Petty Officer Photographer Jay Allen)

President Joe Biden announced a new defense pact between the United States, the United Kingdom and Australia, clearly aimed at China, during White House remarks on Wednesday in a further sign of the decline of Anglo-Saxon power.

The pact, to be known as AUUKUS, will make it easier for the three Anglo-Saxon nations to share knowledge and capabilities in artificial intelligence, cyber, underwater systems and long-range strike capabilities, Politico first reported. Australia will have its first nuclear-powered, conventionally-armed submarines built as part of the deal.

Australia had already had a $66 billion deal with France to build its submarine fleet, a deal Australia has now abandoned in favor of its English-speaking partners. France reacted bitterly to the move, cancelling a gala event in Washington, with French Foreign Minister Jean-Yves Le Drian calling it a “knife in the back.” He told Franceinfo radio that “the American choice to exclude a European ally and partner such as France” was a “regrettable decision” that “shows a lack of coherence,” adding that it was a “unilateral, brutal, unpredictable decision,” that reminded him of Biden’s predecessor.

Though China was not mentioned by Biden, Johnson and Morrison, implications of the new pact appear clearly aimed at Beijing amid increasing tension in the South China Sea, where the three Anglo-Saxon nations have deployed war ships. The HMS Queen Elizabeth entered the sea in early August, prompting protest from China, which called it a “colonial” maneuver. Tellingly, the British aircraft carrier is named after Queen Elizabeth I, the monarch at the start of the British Empire.

After Biden withdrew the last U.S. troops from Afghanistan last month, he said in a White House address that the U.S. would be turning even greater military attention to Russia and China, which have been growing closer economically and militarily over the past few years.

The defeat in Afghanistan was a major blow to the U.S. and its Western allies in the “great game” competition over control of Eurasia, and a major win for China, which was missing U.S.-occupied Afghanistan in its Belt and Road Initiative, an economic plan to link Eurasian nations.

As Alfred McCoy wrote in an article published today on Consortium News:

“With a trillion dollars invested in Eurasia and another trillion in Africa, China is engaged in nothing less than history’s largest infrastructure project. It’s crisscrossing those three continents with rails and pipelines, building naval bases around the southern rim of Asia, and ringing the whole tricontinental world island with a string of 40 major commercial ports.

Such a geopolitical strategy has become Beijing’s battering ram to crack open Washington’s control over Eurasia and thereby challenge what’s left of its global hegemony.

America’s unequalled military air and sea armadas still allow it rapid movement above and around those continents, as the mass evacuation from Kabul showed so forcefully. But the slow, inch-by-inch advance of China’s land-based, steel-ribbed infrastructure across the deserts, plains, and mountains of that world island represents a far more fundamental form of future control.”

Thus the new U.S.-U.K-Australia pact can be seen as a further indication of the nervousness in Washington, London and Canberra over the further decline of Anglo-Saxon power, which has dominated the world for the past four centuries.

The United States took over the mantle of running the English-speaking empire after World War Two, when Britain formally ended its empire and hitched its disappearing hegemony to U.S. global dominance.

The writing is on the wall for the Anglo-Saxon powers, as it sees the world slipping through its fingers, prompting ever greater aggressiveness, rather than face economic and geo-political reality. Instead of seeking to peacefully join a multilateral world as equal partners, it is turning to ever greater military alliance to desperately try to hold onto its fading power.