Caitlin Johnstone blasts the career-long warmongers — from Paul Wolfowitz to Tony Blair — now attacking a major argument in support of the U.S. withdrawal from Afghanistan. 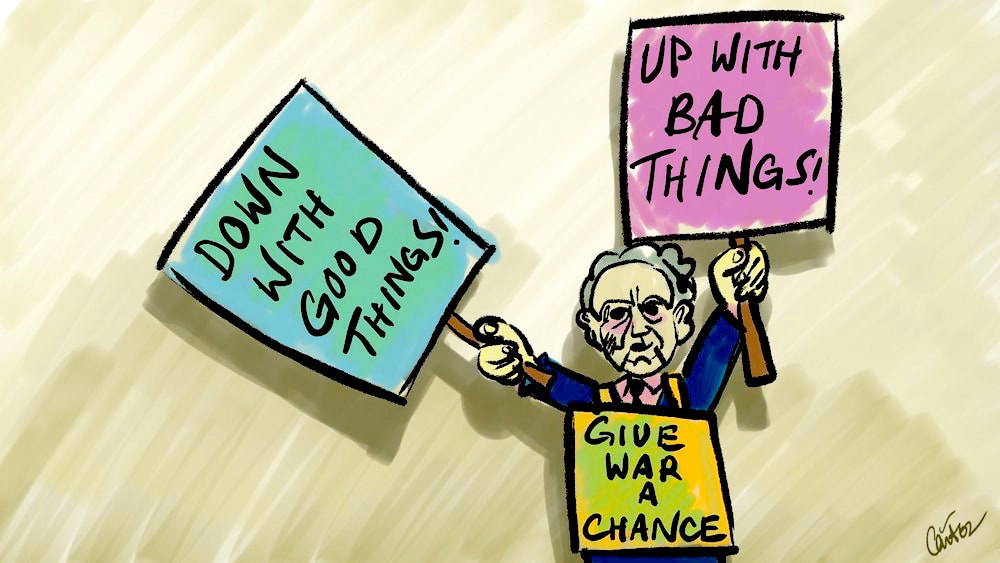 In the wake of the U.S. withdrawal from Afghanistan influential promoters of Western militarism have been absolutely fuming about the popular idea of ending the forever wars, and their tantrums are not even trying to disguise it as something else. They’re literally using that phrase, “ending the forever wars,” and then saying it’s a bad thing.

I mean, what a bizarre hill to die on. War is the very worst thing in the world, and forever is the very worst amount of time they could go on for, yet they’re openly condemning the “doctrine of ending the forever wars.” How warped does your sense of reality have to be to even think this is a view anyone who isn’t paid by defense contractors could possibly be sympathetic to?

Yet they are indeed trying. Citing the chaos of the Afghanistan withdrawal as though every single day of the 20-year occupation has not been far worse, career-long warmongers are trying to spin “ending the forever wars” as a disdainful slogan that everyone should reject.

Tony Blair, the former prime minister of Britain who led the UK into Afghanistan, criticized Biden's withdrawal, calling it a hasty move made “in obedience to an imbecilic political slogan about ending ‘the forever wars.’” https://t.co/jJbWliMJc9

As we discussed previously, The Hague fugitive Tony Blair recently made headlines with a lengthy statement bloviating about the concept of ending forever wars with the revulsion you’d normally reserve for people advocating the elimination of age of consent laws or legalizing recreational panda punching.

“We didn’t need to do it. We chose to do it,” Blair wrote of the withdrawal. “We did it in obedience to an imbecilic political slogan about ending ‘the forever wars’, as if our engagement in 2021 was remotely comparable to our commitment 20 or even ten years ago, and in circumstances in which troop numbers had declined to a minimum and no allied soldier had lost their life in combat for 18 months.”

As Blair well knows, the only reason no allied soldier had lost their life in combat for 18 months was because the Trump administration had cut a deal with the Taliban in February 2020 on condition of withdrawal from Afghanistan.

Pretending the lack of deaths among occupying forces was due to the occupation being easy and that it was in any way sustainable minus a credible promise of withdrawal is disgusting. And not that Blair cares but it’s not like the occupation hasn’t been slaughtering mountains of civilians during those 18 months.

Paul Wolfowitz, chief advocate of the Iraq War, being given major op-ed space to argue the US should've never withdrawn from Afghanistan — while also lecturing Biden on "credibility" — proves that in US media, there's no official wrongdoing that you can't be rehabilitated from pic.twitter.com/0TZ5dWRCPv

Then there’s Iraq war architect Paul Wolfowitz, who’s been on a media tour throughout the withdrawal because obviously everyone wants to hear the opinions of Bush administration war criminals about whether it’s okay to end the Bush administration’s criminal wars. His latest contribution is a Wall Street Journal op-ed titled “The ‘Forever War’ Hasn’t Ended” in which he argues the concept of ending forever wars is both stupid and fallacious.

“President Biden, like his two immediate predecessors, seems to think you can end ‘forever wars’ simply by leaving them,” Wolfowitz writes. “But Thursday’s unprovoked attack, on people who were fleeing and those who were helping them, demonstrates the truth of the soldier’s adage that ‘the enemy always gets a vote.’”

“Choosing to avoid ‘forever war’ by abandoning our Afghan allies was both costly and dishonorable,” says Wolfowitz. “Exactly as Churchill said to Neville Chamberlain after the betrayal of Czechoslovakia at Munich: ‘You were given the choice between war and dishonor. You chose dishonor, and you will have war.'”

God what a wanker.

In many respects, #Afghanistan represents the 1st real implementation of the "ending forever wars" doctrine.

The results so far?

Then there’s UAE-funded war propagandist Charles Lister hilariously arguing that the withdrawal shows a failure of the “ending forever wars doctrine” on the basis that it caused the “crumbling of a democratic government” and made “Al Qaeda ecstatic.” Hilarious because only by the most determined mental gymnastics was the corrupt U.S. puppet regime in Afghanistan “democratic,” and because Lister has been an outspoken advocate of Al Qaeda in Syria.

There’s also the insufferably hawkish Congressman Adam Kinzinger, who has received campaign donations from Boeing, Raytheon, Lockheed Martin and Northrop Grumman, appearing on MSNBC and writing a Foreign Policy op-ed explicitly in opposition to the notion of ending endless wars.

“On both sides of the political spectrum, we’ve heard the ‘endless wars’ rallying cry used to argue against America’s presence in the Middle East,” Kinzinger writes for Foreign Policy. “We’ve heard the many fatigued Americans who complain about ‘forever wars.’ Some are upset by the money spent, and others want our troops home, or both. Those who have lamented for years that our mission in Afghanistan was a disaster from the start are stepping up in droves to say they were right and that we should have left years ago — or never engaged at all. I respectfully and vehemently disagree with all of it.”

Kinzinger told MSNBC’s Andrea Mitchell that “the kind of Rand Paul ‘endless war’ crowd that have been stoking this fire of endless war and man we’re all tired” is like “when your grandma tells you how tired you are and you eventually feel tired.” He then advocated for re-invading Afghanistan to take back the abandoned Bagram airfield.

Kinzinger: The endless war just got fired up again pic.twitter.com/cQllKJxR0W

“In Afghanistan, the demagogues who wanted to see an end to America’s ‘forever wars,’ regardless of the consequences, got their wish. It has been a disaster arguably without parallel,” writes Rothman, who has apparently never heard of the disaster that was the entire Afghanistan occupation.

“The U.S. maintains deployments in and around the Middle East that fluctuate between 45,000 and 65,000 troops. Would advocates of retrenchment sacrifice that mission — and the Middle Eastern governments that rely on it to prevent non-state actors and Iranian proxies from destabilizing those regimes?” Rothman asks. “What about Africa, where between 6,000 and 7,000 American troops are advising local forces fighting Islamist militant groups?”

Uh, yeah actually, getting rid of those would also be great. The less expansive you can make the most destructive institution on earth, the better.

The alternative to withdrawal from Afghanistan was not “endless occupation” but open-ended presence. Occupation is imposed, presence invited. Unless you think we are occupying Japan, Germany, & South Korea. And yes, withdrawal was the problem. https://t.co/FceI02wWNF

Perhaps the funniest case was Richard Haass, president of the wildly influential war propaganda firm Council on Foreign Relations, arguing on Twitter for a rebranding of “endless occupation” to “open-ended presence.”

“The alternative to withdrawal from Afghanistan was not ‘endless occupation’ but open-ended presence,” Haass said. “Occupation is imposed, presence invited. Unless you think we are occupying Japan, Germany, and South Korea. And yes, withdrawal was the problem.”

The fact that these people are thought leaders of policy-shaping influence and not fringe pariahs of society shows that our world is being steered by idiots and sociopaths. They’re standing there right in front of us and wagging their fingers at us for opposing something as straightforwardly and self-evidently bad as endless war. ENDLESS WAR.

They should be mocked and laughed at for this. We will know our world is becoming sane when such creatures are regarded with scorn and ridicule instead of being taken seriously by the largest platforms in our society. Never stop making fun of these freaks.

← The Taliban’s Ideological Roots in Colonial India
Chris Hedges: The Empire Does Not Forgive →

7 comments for “Fighting an End to Endless Wars”