Jeffrey Kucik and Don Leonard consider what it takes to survive in today’s America. 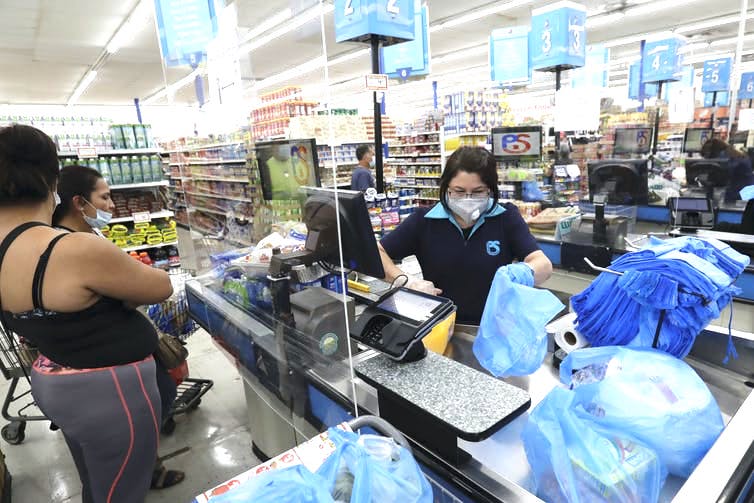 Retail employees such as cashiers are among the least-paid U.S. workers. (AP/Wilfredo Lee)

On Thursday the U.S. Supreme Court overturned President Joe Biden’s moratorium on evictions in response to the pandemic, which has devastated the economy. “If a federally imposed eviction moratorium is to continue,” the majority opinion said, “Congress must specifically authorize it.” This article lays out what a disaster that will be for millions of Americans who, even in normal times, can hardly pay for housing, a basic human right.

By Jeffrey Kucik and Don Leonard
The Conversation

The Biden administration is likely celebrating a better-than-expected jobs report, which showed surging employment and wages. However, for millions of working Americans, being employed doesn’t guarantee a living income.

As scholars interested in the well-being of workers, we believe that the economy runs better when people aren’t forced to choose between paying rent, buying food or getting medicine. Yet too many are compelled to do just that.

Determining just how many workers struggle to make ends meet is a complicated task. A worker’s minimum survival budget can vary considerably based on where the person lives and how many people are in the family.

Take Rochester, New York. It has a cost of living that’s closest to the national average across 509 U.S. metropolitan areas, according to the City Cost of Living Index compiled by the research firm AdvisorSmith.

MIT’s living wage calculator shows that a single adult living in Rochester needs at least $30,000 a year to cover the cost of housing, food, transportation and other basic needs.

But in San Francisco, which AdvisorSmith data indicate is the U.S. city with the highest cost of living, affording just the basics costs $47,587, mainly due to significantly higher taxes and rents. 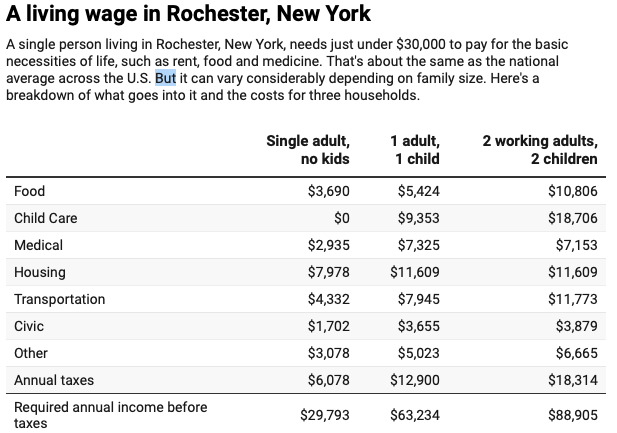 The city with the lowest cost of living is Beckley, West Virginia. Even there, a childless worker still needs to earn about $28,200 to make essential ends meet. Again, the average American city has a cost of living of around $30,000 a year for a single person.

Of course, costs add up quickly for households with more than one person. Two adults in Rochester need over $48,000 a year, while a single parent with one child needs more than $63,000. In San Francisco, a single parent would need to earn $101,000 a year just to scrape by.

So that’s what it takes to survive in today’s America. About $30,000 a year for a single person without dependents in the average city – a little less in some cities, and much, much more for families and anyone who lives in a major city like San Francisco or New York.

But we estimate that at least 27 million U.S. workers don’t earn enough to hit that very low threshold of $30,000, based on the latest occupation wage data from the Bureau of Labor Statistics, a government agency, from May 2020. We believe this is a conservative estimate and that the number of people with jobs who earn less than what’s necessary to afford the necessities of life is likely much higher.

Low-income occupations encompass a wide range of jobs, from bus drivers to cleaners to administrative assistants. However, the majority of those 27 million workers are concentrated in two industries: retail trade and leisure and hospitality. These two industries are among America’s largest employers and pay the lowest average wages.

It’s the same story for leisure and hospitality, the industry that took the hardest hit from the Covid-19 pandemic, hemorrhaging 6 million jobs in April 2020 as much of the U.S. economy shut down. At the time, close to a million waiters and waitresses were earning less than the median income of $23,740.

Of course, millions of those jobs have returned, and wages have been surging this year — though only slightly more than inflation. But that doesn’t change the basic math that roughly 1-in-6 workers is making less than what’s necessary for an adult with no kids to survive.

That’s why it’s hardly surprising that 40 percent of U.S. households reported in 2018 that they couldn’t afford an emergency $400 expense.

To us, these figures should cause policymakers to redefine who counts among the “working poor.” A 2021 Bureau of Labor Statistics report estimated that in 2019 about 6.3 million workers earned less than the poverty rate. 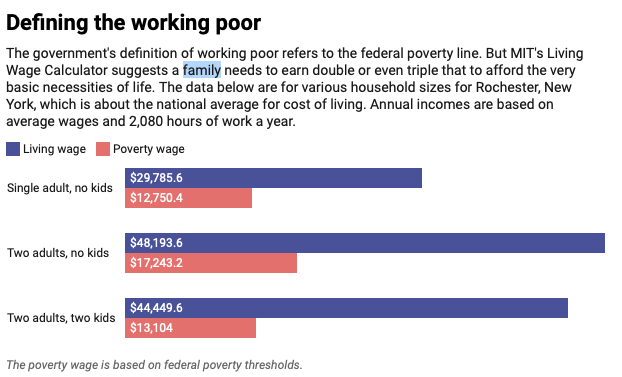 But this situation drastically understates the scope of the working poor because the federal poverty line is unrealistically low – only $12,880 for an individual. The official poverty line was created to determine eligibility for Medicaid and other government benefits that support low-income people, not to indicate how much a person needs to actually get by.

Writer James Truslow Adams coined the phrase “The American Dream” in 1931 to describe a society in which he hoped anyone could attain the “fullest stature of which they are innately capable.” That depended on having a good job that paid a living wage.

Unfortunately, for many millions of hard-working Americans, the “better and richer and fuller” life Adams wrote about remains just a dream.