Images of thousands of Afghans desperately trying to flee their country following a hasty U.S. withdrawal have provoked an international outcry.

As of Aug. 22, some 6,000 U.S. troops were working to evacuate U.S. military, American citizens and Afghans who are approved for Special Immigrant Visas. SIVs are a special program to protect Afghans who risked their lives working for U.S. troops in Afghanistan.

Germany, France, Italy and the U.K. are conducting smaller evacuation efforts for their nationals and some Afghans.

The pace of these poorly planned evacuations has been slow. They are taking place amid chaos in Kabul, where crowds are being confronted by violence from members of the now-ruling Taliban and U.S. forces and facing checkpoints that are near-impossible to pass.

As a scholar specializing in forcible displacement and refugees, I see this harrowing scene unfolding within a broader context of Afghanistan’s long-standing displacement crisis. This includes an unequal sharing of refugees between the developed world and economically disadvantaged countries. 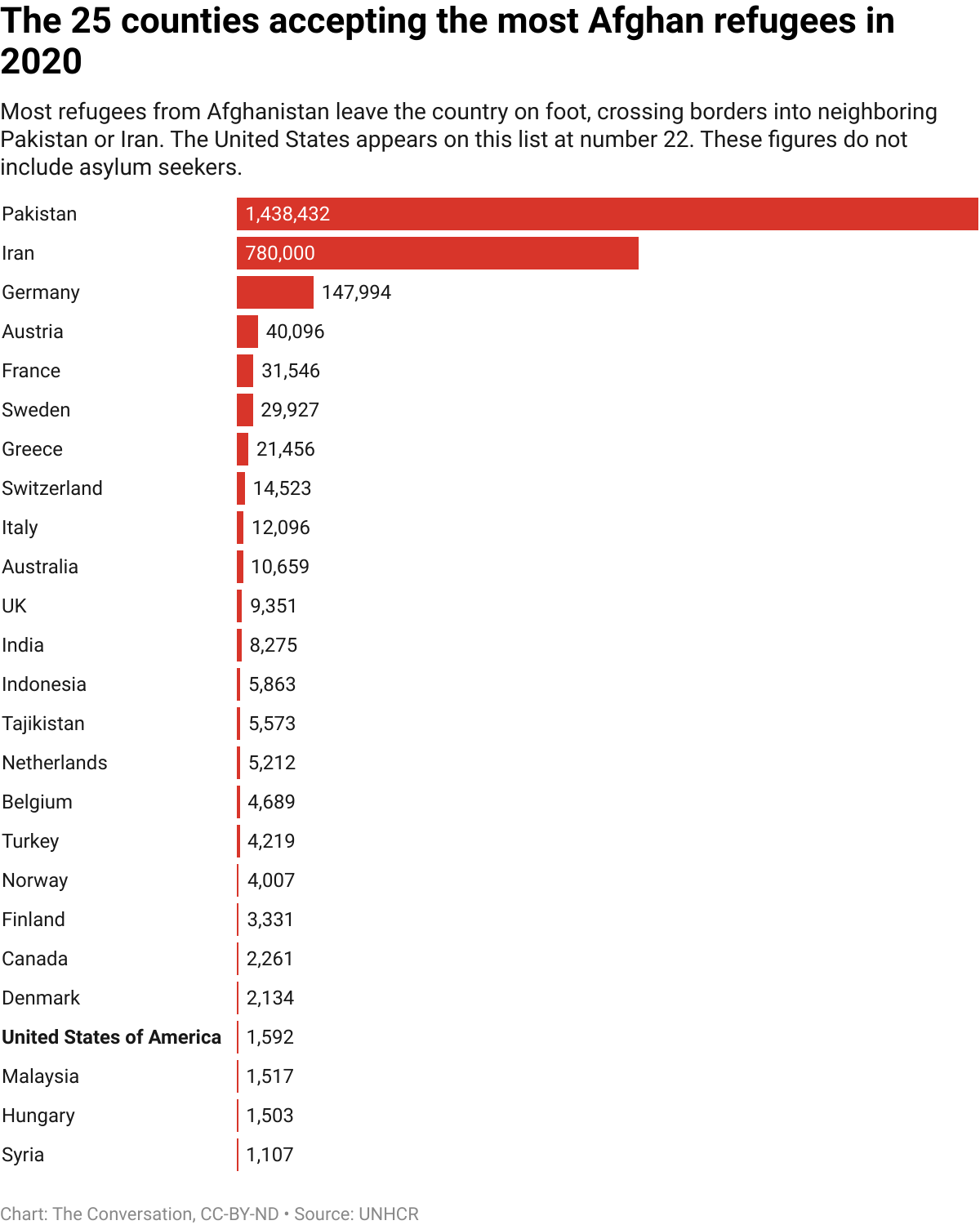 A Muted US Role

The U.S. Refugee Act of 1980 standardized the procedures for admitting refugees – people who have fled war, violence, conflict or persecution – and put in place a rigorous vetting process. But over the past 40 years, U.S. acceptance rates for refugees worldwide have fallen significantly – from 200,000 admitted in 1980 to less than 50,000 in 2019.

That number seems tiny compared to the approximately 20,000 Afghans who are currently in the pipeline waiting for a SIV and the additional 70,000 Afghans — including applicants and their immediate family members — who are eligible to apply.

For decades, Afghans have also migrated or fled to Europe. Between 2015-2016, 300,000 of them arrived on the continent. They were the second-largest group of refugees and asylum-seekers after Syrians. Asylum seekers are people seeking refugee status, but whose claim has yet to be evaluated.

The Afghan population across the European continent remains small and unevenly distributed. Up until the Taliban takeover of Kabul in August 2021, many Afghans were facing deportations. Germany is the largest European host, followed by Austria, France and Sweden.

For the first three months of 2021 about 7,000 Afghans were granted permanent or temporary legal status in the European Union. They are distributed between Greece, France, Germany and Italy, with smaller Afghan contingents in other EU states.

Australia – based on its 2016 census – has approximately 47,000 Afghans who are permanent residents, some of whom began arriving as early as 1979. Approximately another 4,200 Afghans have received temporary protected status.

This still leaves an enormous number of Afghans who are displaced without a permanent home. More than half a million have already been displaced by the violence so far in 2021 according to the U.N. refugee agency. Some 80 percent of nearly a quarter of a million Afghans forced to flee since the end of May are women and children.

As of 2021 and prior to the current crisis, at least 3.5 million Afghans remained uprooted within Afghanistan because of violence, political unrest, poverty, climate crisis and lack of economic opportunity.

The vast majority of Afghan refugees do not settle in the West.

Pakistan, which shares a 1,640-mile land border with Afghanistan, has long absorbed the largest number of Afghan refugees even though it is not a party to the 1951 Refugee Convention or the 1967 Protocol. Within two years of the 1979 Soviet invasion of Afghanistan, following the conflict ignited by the rise of the Mujahideen, 1.5 million Afghans had become refugees. By 1986, nearly 5 million Afghans had fled to Pakistan and Iran.

Iran also remains a significant host for Afghans, with nearly 800,000 registered refugees and at least 2 million more who are unregistered. Smaller numbers of Afghan refugees and asylum-seekers are in India (15,689), Indonesia (7,692) and Malaysia (2,478). 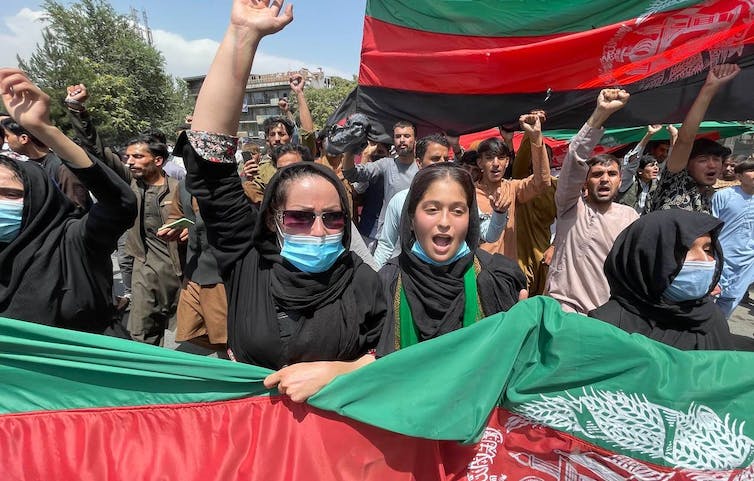 Despite the presence of the Taliban, a group of protesters march with Afghan flags during the country’s Independence Day rally in Kabul, Afghanistan on Aug. 19. (Haroon Sabawoon/Anadolu Agency via Getty Images)

As It Stands Today

The latest figures from the AP show that more than 47,000 Afghan civilians and at least 66,000 Afghan military and police forces have died in the 20-year-old Afghanistan war

The security situation in the country had been deteriorating in recent years. According to Brown University’s Cost of War Project, an increasing numbers of Afghans have been killed as a result of crossfire, improvised explosive devices, assassinations by militant groups including the Taliban, night raids by U.S. and NATO forces and U.S.-led airstrikes.

With the Taliban takeover of Kabul, there is a growing concern for the safety of Afghanistan’s women and girls, ethnic minorities, journalists, government workers, educators and human rights activists. Many Afghans desperate to leave remain outside Kabul and far from any airport.

U.S. evacuations will likely end once all Americans are out of Afghanistan. A few other Western countries have committed to taking in small numbers of refugees, including Canada (20,000) and the U.K. (20,000 over 5 years).

Still, adoption of hard-line policies and anti-refugee sentiments across much of Europe means that relatively few Afghans will find sanctuary on the continent. Austria and Switzerland have already refused to take in large numbers of Afghans. Turkey, already straining with refugees, said it does not want to become “Europe’s refugee warehouse.”

Ultimately, most Afghans able to leave the country will do so not in an aircraft, but on foot into Pakistan and Iran. Pakistan, already strained by its own economic and political struggles, will once again likely be the largest host for the most recently displaced Afghans.

But given that border crossings in the region are difficult and dangerous, the vast majority of uprooted Afghans will remain within Afghanistan’s borders. Their considerable humanitarian needs, economic and political challenges, security concerns and resistance to the Taliban will shape the next chapter of the country’s history.

Tazreena Sajjad is senior professorial lecturer of global governance, politics and security at the American University School of International Service.

2 comments for “Where Do Afghanistan’s Refugees Go?”