Remaking the world — all of it — in the U.S. image has been a foundation stone of American foreign policy since the Wilson administration — a century ago. 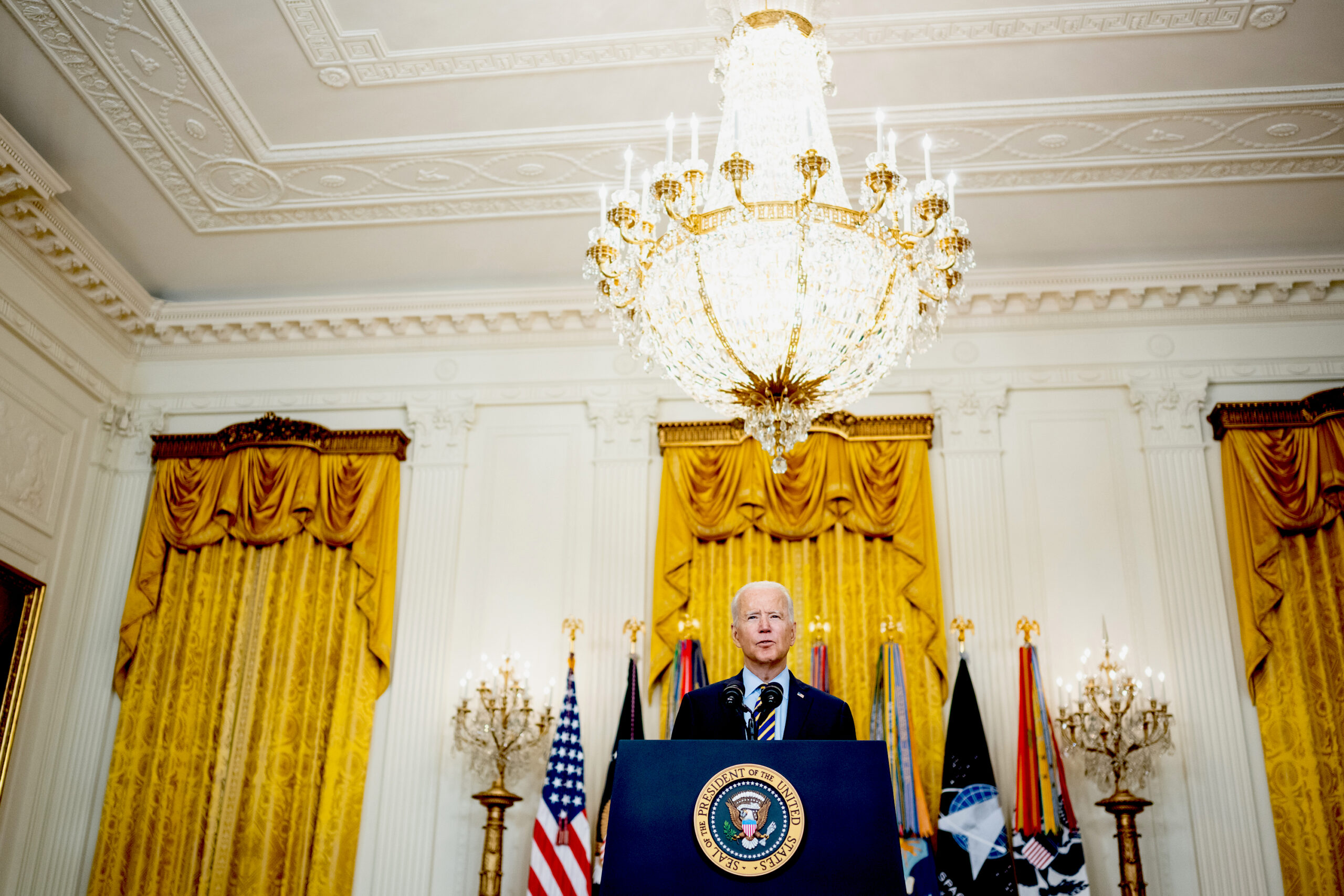 On July 8, U.S. President Joe Biden said there was little likelihood of the Taliban “overrunning everything and owning the whole country.” (White House, Hannah Foslien)

In Sophocles’ celebrated tragedy, pride and hubris have blinded Oedipus to who he is and what he has done. He hunts his father’s murderer only to discover he is the patricidal killer. When he blinds himself in despair, it signifies he has seen the truth. He knows himself at last by way of another kind of sight and that is insight.

The debacle in Afghanistan is not a tragedy however many times we call it one. The 20 years of violence and destruction are a disaster, yes. Nearly 160,000 people have died, the Watson Institute’s Cost of War Project tells us, and the U.S. wasted $2.3 trillion it could have spent bettering the human condition anywhere it wanted at home or abroad.  Is there clarity, self-recognition, insight? Don’t look for any now that the Afghan adventure is over.

Sarah Abdallah, a Lebanese journalist with a lively presence on Twitter, compiled a list of eight U.S. presidents who had a hand in the Afghanistan war — her chronology extending back not two decades but four.

None of these eight is a tragic figure, given they never got past the blinding pride and hubris that drive the American imperium. The possible exception is Jimmy Carter, who seemed to have looked back after he left the White House, seen what he had done and acted accordingly by way of his various projects, including Palestine: Peace Not Apartheid (Simon and Schuster, 2006), a book that nearly got him tarred and feathered.

For the rest, they proved merely stupid or without conscience. President Joe Biden is both, despite all the effusive nonsense lately as to his “surfeit of empathy,” as The New York Times weirdly put it in a piece on his “values” last week. 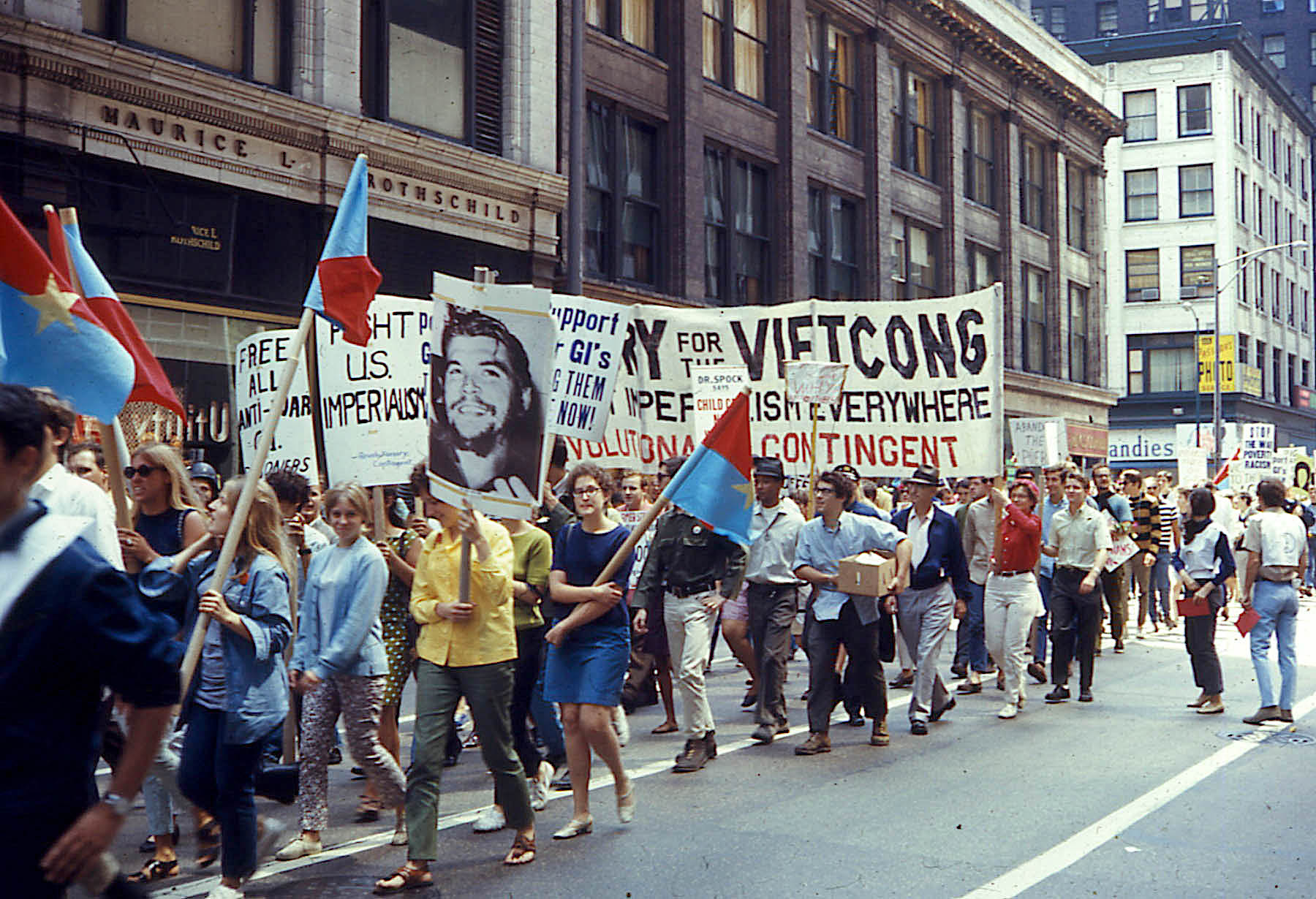 Aug. 10, 1968: Protest against the Vietnam War as Chicago was preparing to host the Democratic National Convention. (David Wilson, CC BY 2.0, Wikimedia Commons)

People — people with no memories and no history before 2001 — talk about “the lessons of Vietnam.” We must ask what they could possibly mean. Among the only things Washington learned after April 30, 1975, were that the American public must be kept ignorant of U.S. conduct abroad and, in the interest of that objective, the American press must be turned into a permanent propaganda machine. We cannot dignify these as lessons. There is nothing in them worthy of the term “insight.”

Now there is talk of “the lessons of Afghanistan.” Let us not descend into silliness.

The fashion of the moment among the liberal commentators appears to be a sort of purgative acknowledgement that America’s insistence that all nations conform to our standards (such as they are), our “model,” our free-market fundamentalism has been wrong all along.

Kathleen Parker, that reliable font of deep thinking on The Washington Post’s opinion page, had a piece last week headlined, “Afghanistan shows us that we can’t invent other nations in our image.”

Don’t you wish weather vanes such as Ms. Parker did something more than make it up as they go along? We are now invited to think that Afghanistan was a one-off error in this regard. The topic she and others do not even know they are exploring is American universalism, sibling of American exceptionalism and in my view the more insidious of the two ideologies. Remaking the world — all of it — in the U.S. image has been one of the foundation stones of American foreign policy since the Wilson administration — neatly enough a century ago.

It is perfectly true that our policy cliques could learn the lesson Parker and others propose, that they could achieve cathartic insights into who they are and what they have done and then begin to do things very differently. But to suggest that they will now learn these lessons or achieve these insights is simply irresponsible.

Those of us who manage, somehow, to see beyond the passing admissions of error we now read — which will fade into oblivion in a trice, mark my word — must take lessons our corporate press has no intention of urging upon us. I propose two. 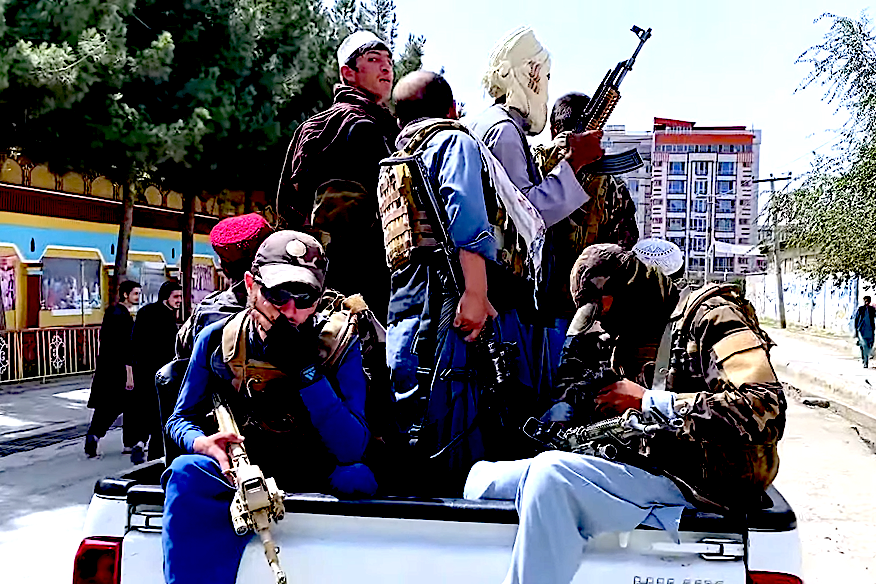 One, the failure in Afghanistan after 20 years of wastage and war-profiteering is an imperial failure, and our lesson — a paradox here — is that the American empire will learn no lessons from it. The withdrawal, however bungled, is an important step and Biden deserves credit for it. To read this as a suggestion that Washington will now step back from a century of universalist ideology and seven decades of hegemonic ambition is a mistake so obvious even the Eagle Scouts among us can avoid it.

There will be no change whatsoever in post–Afghanistan foreign policy, in short. The evidence in this regard accumulates as we speak. Let us reach back all of five days into the annals of American diplomacy.

Last Thursday the Treasury Department announced yet another set of sanctions against Cuba, these against senior Defense Ministry officials, in response to the July 11 protests in various Cuban cities. This is, count ’em, the fourth set of new sanctions imposed on Cuba in the past five weeks. Biden’s people promise more.

As noted previously in this space, the demonstrations at issue were funded and orchestrated by the National Endowment for Democracy and the Agency for International Development, two coup-cultivating U.S. institutions. So it comes to this: We will foment unrest and protests against the privations resulting from American sanctions, then sanction you again and again in response to the demonstrations we backed.

Last Friday was a big day in this line.

Treasury announced that it was sanctioning nine officials and two divisions of the FSB, Russia’s security service, “in response to the state-sponsored poisoning of Russian opposition leader Aleksey Navalny that took place one year ago today.”

The Navalny incident, like the Skripal poisonings in 2018, has never been definitively linked to the Kremlin. But what difference does that make these days?

The same day, the Biden White House advised Congress of a new executive order authorizing a set of sanctions against those participating in the Nord Stream 2 pipeline project. The wording is a blur, as is the provenance of this latest EO. It “blocks the property and interests in property of foreign persons … engaging in certain activities or providing certain services to facilitate construction of the Nord Stream 2 pipeline project, among others.”

Why, why now, and why so vaguely stated?

The order says NS 2 threatens Western Europe’s energy independence —which is of course Western Europe’s to decide — and therefore threatens “the national security, foreign policy, and economy of the United States.” But who wrote this EO? It would appear someone other than Biden, who earlier dropped the sanctions related to NS 2 that the Trump administration had in place.

The order was issued, we should note, the day the soon-to-retire Angela Merkel had her final summit with Vladimir Putin in Moscow, during which the German and Russian leaders noted differences but also the enduring Russo–German relationship.

The move most deserving of attention concerns Afghanistan. It now appears that Washington will replace aid to support the Afghan economy with sanctions. Just before the weekend the U.S. blocked Kabul’s access to Afghanistan’s $9.4 billion in foreign reserves — a small sum but key to a crippled economy’s survival. The always warm-of-heart International Monetary Fund simultaneously suspended distribution of $400 million in emergency funding.

How’s that from the people with all those thoughts and prayers for Afghans?

Memo to Kathleen Parker: These are the acts of a desperate but determined empire that intends to alter its coercive post–Afghanistan policies toward other nations not one jot. You need a new lead. 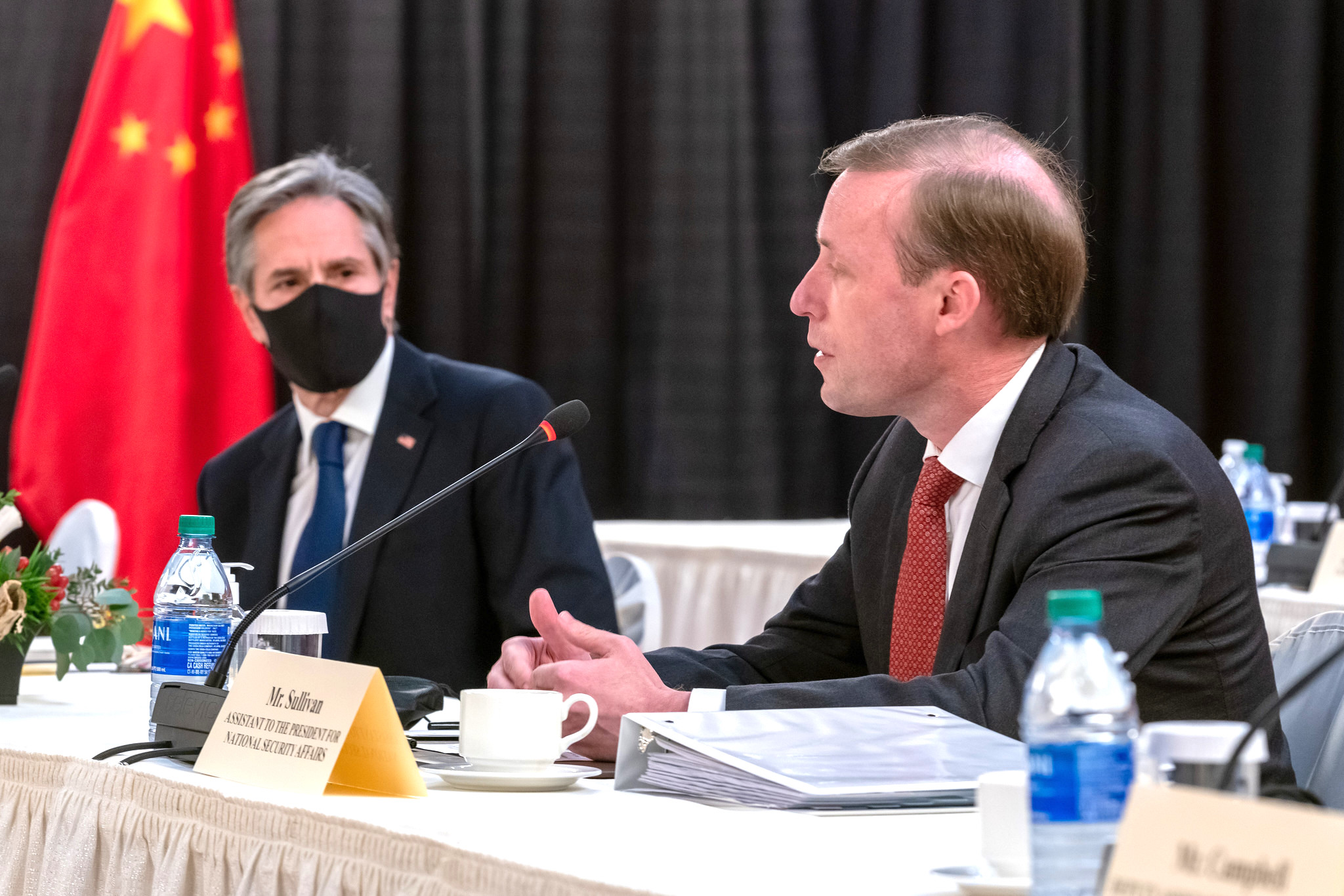 The second lesson for those of us determined to pay attention despite the incessant churn of the American fog machine concerns the question of competence. This was another preoccupation in the press last week—not competence exactly, but whether other nations, allies and adversaries alike, still think Americans are competent after the display of incompetence since the collapse of the U.S. campaign in Afghanistan.

Here is Biden Friday, as the chaos in Kabul fell around his ears:

I urged elsewhere after the president’s performance at his June 16 summit with Putin, shockingly choreographed to keep his appearance in public to the barest minimum, that we had better set aside what partisan animosities we may entertain and face the shared reality that we have a president who is mentally impaired. We do not, in short, have an able leader.

We can mark down the Geneva summit with Putin as an embarrassment. Now the problem of incompetence grows greatly more serious. This administration is as opaque as Trump’s, if for different reasons. However, from all appearances it is being run not by an experienced president but by appointed technocrats and yes-men and yes-women who are in far over their heads.

Brett Bruen, a top official on the foreign policy side during the Obama administration, published an opinion piece in USA Today a week ago calling on Biden to fire Jake Sullivan. Here is what Bruen has to say about Biden’s national security adviser:

“The national security adviser has two jobs. As the name suggests, they are the last and ideally closest counselor to the president in the Situation Room. Their second duty is to translate the commander in chief’s decisions and direction into practical policies. Sometimes that requires speaking truth to power. On all of these scores, the current occupant of the office appears to have failed.”

Coming from a Democratic apparatchik, an insider, this is a serious assertion. And I am certain Bruen knows without saying so that the Sullivan problem is not the half of it. Antony Blinken is visibly drowning as secretary of state — no idea what he is doing. Ned Price, Blinken’s mouthpiece at State, should be checked to confirm he is not an artificial-intelligence robot — incapable of a rational exchange with diligent diplomatic correspondents such as the AP’s Matt Lee.

We are riding for a fall so long as Biden is in office. It begins to look worse than the later years of the Reagan administration, when the permanent apparatus ran the country while the Great Communicator napped all afternoon. And one begins to wonder whether this is not how said permanent apparatus — the national security state and its visible appendages — prefers it.

Biden was right to get the U.S. out of Afghanistan, although we have to see whether he will continue intervening by way of crippling, coercive sanctions, special forces, CIA contractors and Air Force bombers. The only thing that makes Biden look good post–Afghanistan is the thought of a Kamala Harris presidency, and I don’t have it in me to go into that just yet.

← John Pilger: The Great Game of Smashing Nations
Where Do Afghanistan’s Refugees Go? →

24 comments for “PATRICK LAWRENCE: No Insight After Afghanistan”