The July riots in South Africa remind Ryan Brunette of those by the Peronists in Argentina in December 2001. But Zuma’s people are moving from a much weaker position. 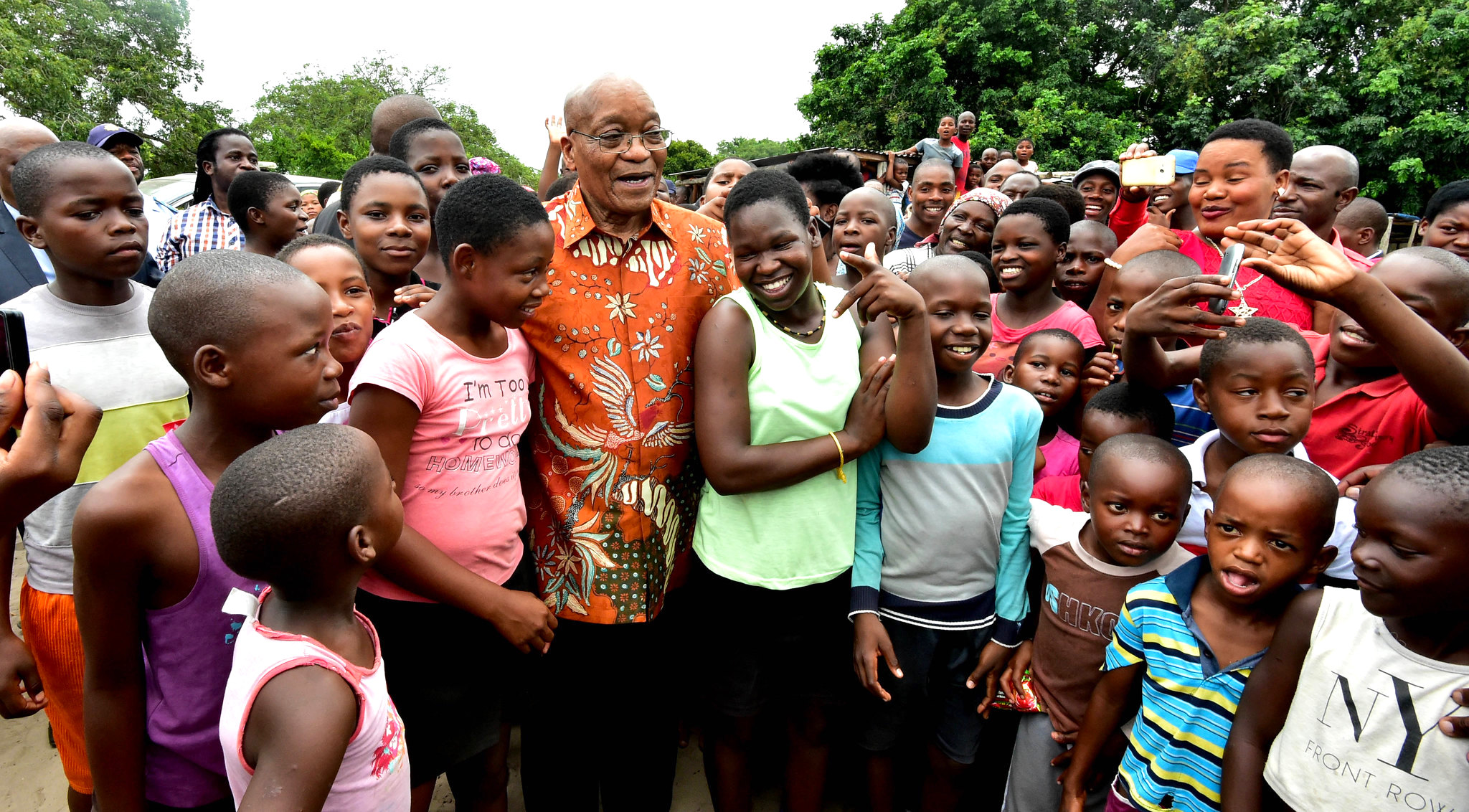 By Ryan Brunette
Africa is a Country

Debates about the July unrest in South Africa reminded me of the parable of the blind men and the elephant.

Protagonists posed a series of sharp dichotomies. There are elites and there are masses. The unrest was orchestrated by elites assembled around former President Jacob Zuma, or the masses spontaneously seized the initiative and gave it progressive potential. It was an insurrection or a food riot, a criminal plot or a popular revolt, an assault on constitutional democracy or possibly a democratizing drive.

Each grasps a tusk, the trunk, a leg. They attempt, from a part, to describe the new and fantastical creature that takes form in their imagination. They disagree, accuse each other of dishonesty, and maybe they come to blows. The prudent demur. They counsel caution given the limits of available evidence. The entity before us, they say, is many-sided. The elements perceived might be co-present. Mixed in not yet known proportions. Related in still unknown ways.

Everyone fails to conceive the elephant, but there are those who have seen one before. 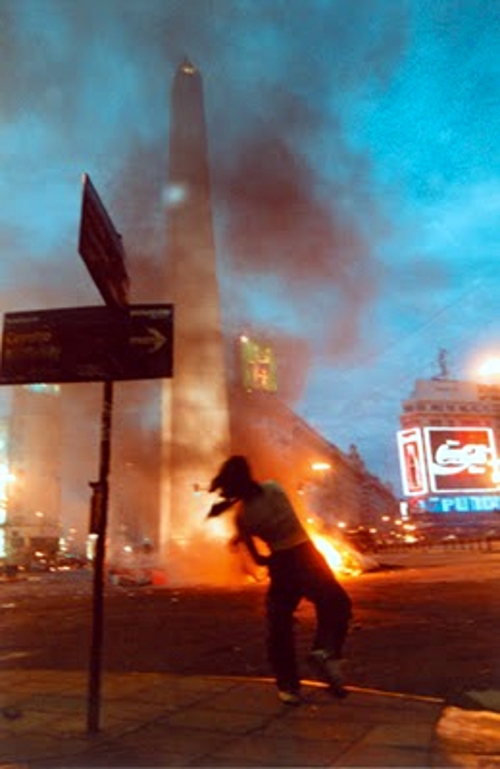 In December 2001, Argentina erupted in protests and riots. The country was three years into a brutal depression.

President Carlos Menem of the Peronist Justicialist Party, who had led the country for a decade from 1989, oversaw its first months. By 1999, mired in allegations of corruption, with his own party maneuvering for succession, his bid for an unconstitutional third consecutive term came to nothing.

In general elections of that year, the Peronists lost the presidency to Fernando de la Rúa of the Radical Civic Union, who promised anti-corruption, economic stabilization, and growth.

The depression, however, wore on.

De la Rúa’s administration courted popular opposition by curtailing social expenditure. It was itself beset by scandal, as ministers were accused of paying bribes to senators to pass contentious union-busting legislation.

In June 2001, Menem was convicted for illegally authorizing an arms deal while president, only to be controversially acquitted in November. Still under a cloud of prosecutions, he remained leader of the Justicialist Party, which in October legislative elections had taken command of both houses of Congress. With De la Rúa’s own coalition coming undone, the prospect of his removal now rose into view.

The hand of the Peronists in what followed is well-attested. The party prefers to ride into power on the back of popular protests. These played a part in Juan Perón’s ascent in 1946 and 1973. The same with Menem in 1989.

By 2001, the Justicialist Party operated an elaborate and mass-based patronage system. It continued to govern a series of provinces and municipalities. There it had constructed a transactional relationship with the police, where the party turned a blind-eye to corruption in exchange for financial contributions.

The Peronists had a strong presence in the unions and cultivated a broad network of municipal councillors and grassroots brokers, who distributed government assistance and other benefits in exchange for political support. 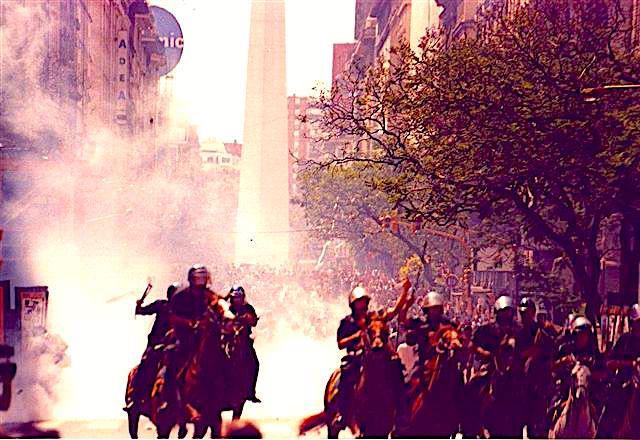 When December came, the unions were mobilizing their seventh general strike against the De la Rúa government. The so-called piqueteros — a broad movement of unemployed people who blocked roads to make claims on the state, and Peronist patronage networks — came out onto the highways. Peronist mayors led mass marches.

Argentina’s poorest and most unequal provinces reported no looting. In those that did, sociologist Javier Auyero has shown that ordinary people had a variety of motives for joining in. Many had pressing material needs, but many others were simply curious and drawn in by the excitement, by the influence of family and friends and the seductions of the crowd. What they all needed was an opportunity. Whatever their motives, what enabled them was a credible guarantee that they would not be met with armed force, arrest and prosecution.

Peronist operatives, because they were understood to be associated with the government, were well-placed to provide this guarantee. Acting on information from municipal officials, they knew in advance which sites to target and when. They set about notifying their communities accordingly, mobilizing supporters, distributing flyers, and spreading rumors.

On the day, police would be absent or, where present, they would stand back and sometimes even direct the looting. Among the people, a vanguard, perhaps paid for their troubles, would lead the assault, establishing a breach into which others could pour.

The protests and looting in Argentina peaked on Dec. 18 and 19, 2001. At this moment the Argentine middle class — alienated from the federal administration by its continuing corruption, by the ongoing downturn, and by a recent announcement of harsh restrictions on bank withdrawals — entered the fray with widespread cacerolazos (pot-banging) and street protests.

On the 20th, after intervention by federal security forces resulted in seventeen deaths, De la Rúa resigned, climbed into a helicopter, and fled the presidential palace, the Casa Rosada. The Peronists elevated a caretaker president, fell into factional strife, fomented unrest against each other, and when Menem’s cooling-off period expired, he lost the country’s 2003 presidential election to a member of his own party.

In Argentina, then; those hoary dichotomies between elites and masses, orchestration and popular agency, insurrections and bread riots orbit each other and collide, are integrated and dissolved. They become something different and more concrete. 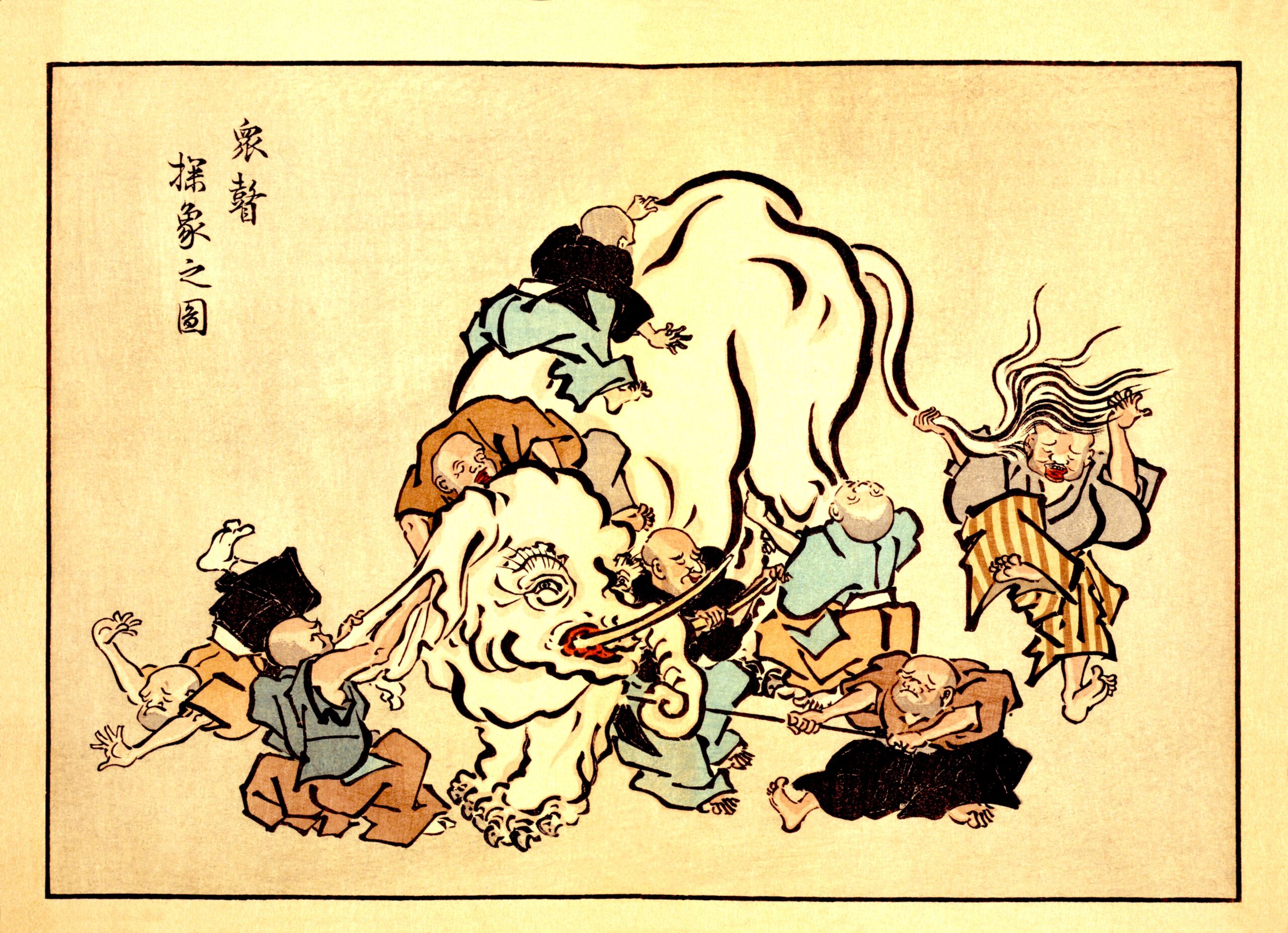 No two elephants are exactly alike, but when we see one, we know it’s an elephant.

Zuma and his faction of the African National Congress ruled South Africa for a decade. There they established an elaborate, mass-based patronage system. They drew the police more tightly into party politics, including by exercising case-by-case discretion over how police engaged with protests.

They used state power to accumulate resources, distributing some of the proceeds, through local wards and branches, into a grassroots support base which was often mobilized in mass actions against political opponents. When they lost the ANC presidency to Ramaphosa in 2017, they were strong enough to play him to a stalemate, ensuring a foothold in the party-state and maintaining their political machine — especially across the geography of the recent unrest, in the KwaZulu-Natal and Gauteng provinces.

The Zumaists, though increasingly threatened, have continued to show a capacity for mobilization. In mid-2019, when Durban Mayor Zandile Gumede was removed from office (she was associated with widespread corruption and factional ANC violence), the Zumaists responded with a wave of protests and violence.

As they’ve lost traction in the party and state, they’ve increasingly relied on an assortment of parallel structures, each exhibiting their own distinctive modes of operation and accumulation. These include certain Zulu traditional authorities, hostel lords, charismatic churches, and breakaway political parties like the African Transformation Movement (ATM).

The Zumaist machine extends to so-called business forums, which operate extortion rackets around construction and other development projects. It incorporates the likes of the paramilitary uMkhonto weSizwe Military Veterans Association (MKMVA) and the All Truck Drivers Foundation (ATDF), which promotes the employment of locals in the trucking industry by blocking highways, beating foreign drivers, and burning their trucks. 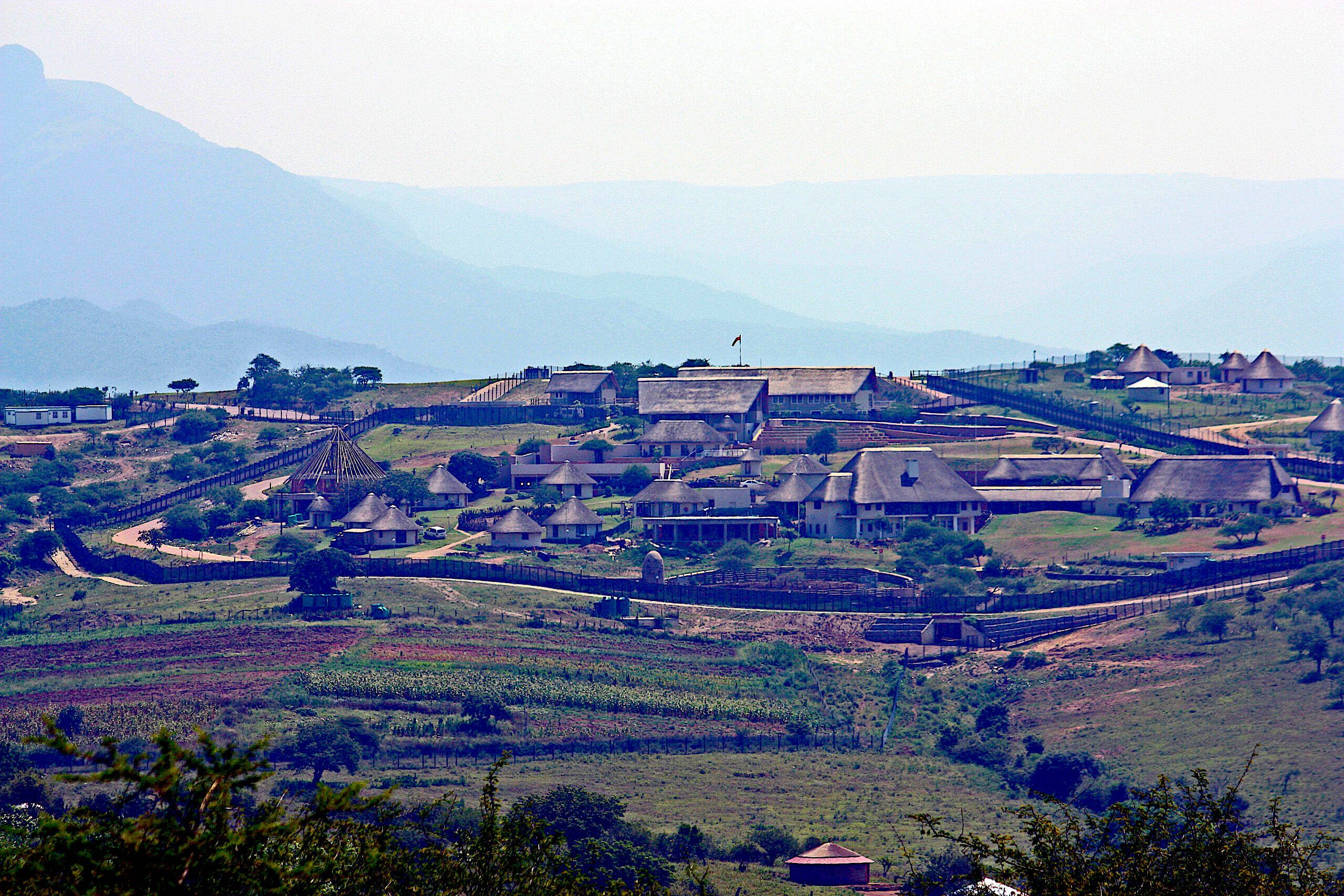 In July, this normally Cimmerian edifice was suddenly and conspicuously illuminated. What we know is that in the prelude to Zuma’s arrest, the MKMVA and a Zulu regiment took up guard around his home at Nkandla. When he turned himself in, prominent leaders and aligned local councilors, ANC branch-members, and Zulu hostel-dwellers, organizing in person and through an architecture of Whatsapp groups, targeted roads, malls, logistics hubs, and a range of other sites. They mobilized people toward these, sometimes even providing transport.

At the sites, there are reports of professionally orchestrated attacks. David Makhura, premier of the Gauteng province, has highlighted the presence of experienced and well-resourced tactical teams, who opened the way into malls for other looters and then went straight for ATMs. In the aftermath, the business forums have gone about extorting protection money from affected businesses.

The Zumaists followed a familiar political stratagem, but from a position of relative weakness. The Peronists were a resurgent political movement, which had earlier taken control of the national legislature and had a clear path into the presidency. They had a social base that extended beyond patronage distributions, because they offered substantive programs to unionized workers and the independently organized unemployed.

The Peronists also operated in a context of much wider social unrest, which allowed them to portray their mobilizations as organic. They struck when the sitting president, Fernando de la Rúa, was forced by a run on the banks to announce painful limits on withdrawals, as he was losing his base in the middle class.

The Zumaists, in stark contrast, are in the process of being purged from the ANC and they have no viable electoral existence outside it. Their base is confined to a deteriorating patronage system, supplemented with vaguely radical, Zulu nationalist, and ever more chauvinistic appeals. Their social project amounts to the appropriation of economic positions and assets from whites, Indians and foreigners, with no visible strategy for distributing and employing the proceeds in an egalitarian and developmental way.

They attacked, after all, not when Ramaphosa had made any unpopular decision, but when their own figurehead was arrested for refusing to appear before a judicial commission, to face questions about his grand corruption.

The Peronists would go on to dominate Argentine politics into the present. The Zumaists, for the time being, have no such prospect. Since the unrest, polls suggest that Ramaphosa’s favorability remains high at 57 percent, compared to Zuma’s 25 percent.

With no plausible strategy for taking executive power, Zuma’s people must settle for applying their ideologically unadorned and declining disruptive power, in an attempt to force the government to limit the scope of prosecutions, ease incarceration, and recognize a principle of non-interference in key spheres of interest in the illicit economy.

The Zumaists are powerful and entrenched enough that they’re not going anywhere soon, but they also have nowhere to go.

← The Pentagon Is Killing Us
South Africa’s Never-Ending Crisis →