Anne Cadwallader reports on the U.K. government’s proposals to end prosecutions for killings during the conflict in Northern Ireland. 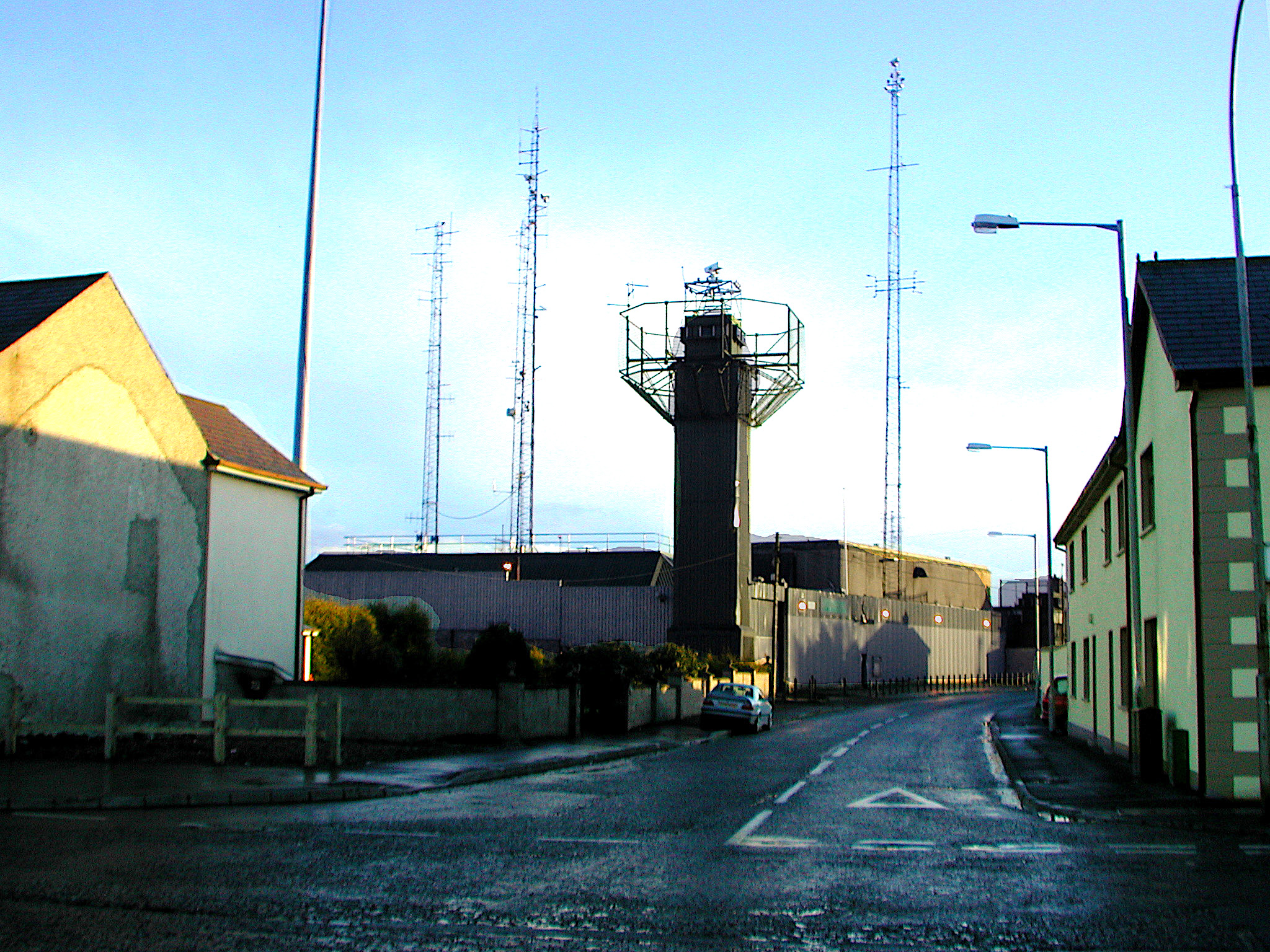 “How can they do this to us? Is it even legal?” These were the despairing words of a retired teacher who lost three members of her immediate family, and her unborn niece, in a 1975 bombing in Northern Ireland where there is evidence of collusion between paramilitaries and British state forces.

She was responding to news of the U.K. government’s latest proposals on resolving bereaved families’ outstanding questions arising from the 35-year conflict.

In the so-called Troubles in Northern Ireland, which began in the late 1960s, Republican (or nationalist) paramilitary groups — principally the Provisional Irish Republican Army (IRA) — fought a violent campaign to unite the territory with the 26 counties in Ireland.

On the other side were unionist (or loyalist) paramilitary forces, established to protect the union with Britain, by force of arms if necessary. These were mainly the Ulster Volunteer Force (UVF) and the newer and larger Ulster Defence Association (UDA).

More than 3,500 people were killed in the conflict. Declassified government files and official police and parliamentary reports on both sides of the border in Ireland suggest that collusion between British security forces and loyalist paramilitary groups was systematic and resulted in the deaths of hundreds of people.

The U.K. government is now proposing to end prosecutions for killings during the Troubles, provoking anger among victims’ groups and across the political spectrum.

The proposals would end the ad hoc legal and quasi-legal processes that families have employed to date in searching for the truth about their dead relatives.

Instead, the government would put in place an untested and vaguely described new body which, it claims, would investigate the past and foster reconciliation by curtailing any court proceedings. 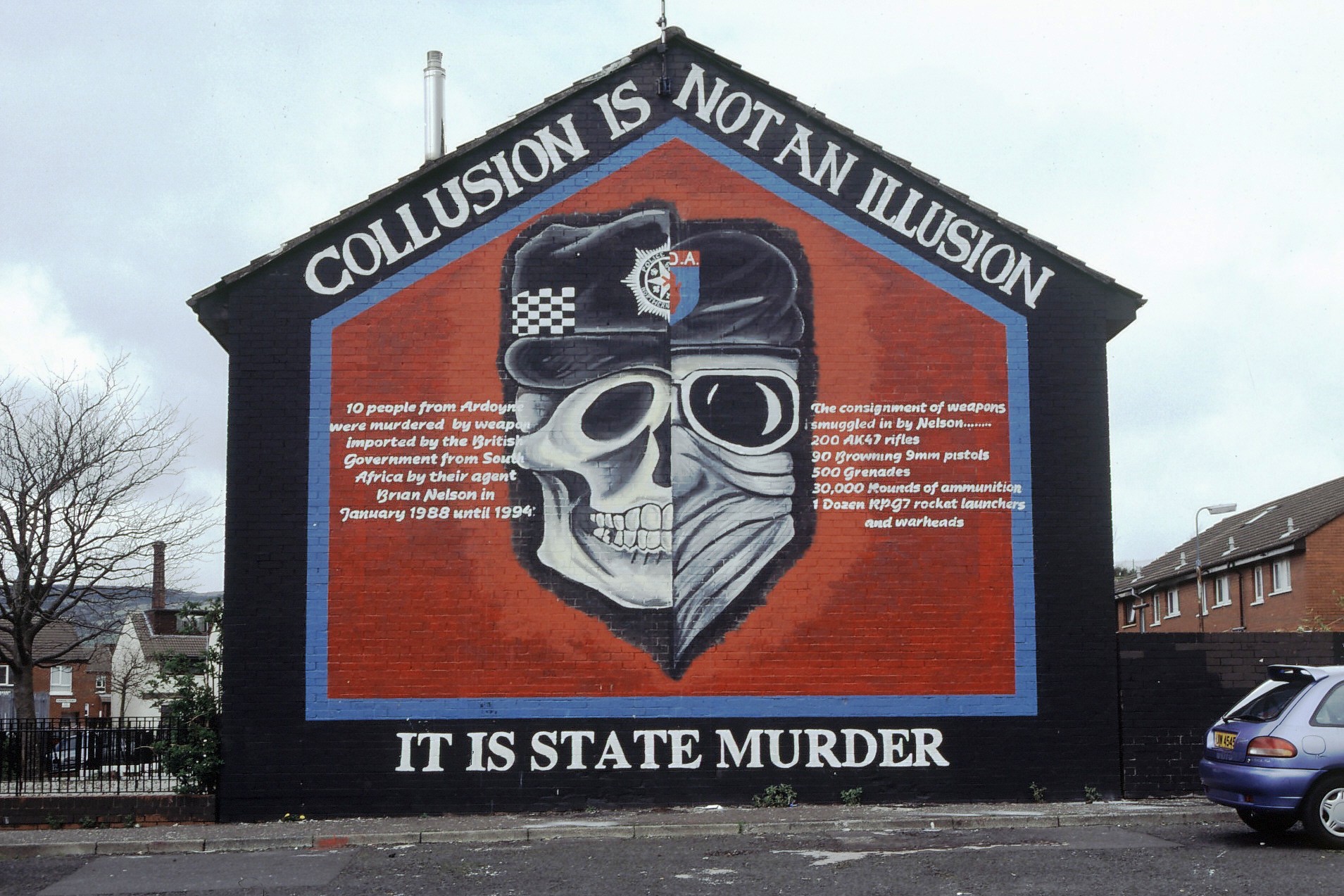 Uniquely, the proposals have united in opposition all five political parties at Stormont, the seat of the Northern Irish assembly, as well as every human rights organisation, domestic and international, along with all NGOs representing victims’ interests.

The proposals are also opposed by the Irish government, a joint signatory to the “Stormont House Agreement” made over four years ago which proposed what amounted to a truth commission to investigate past killings.

London’s consultation process on these proposals attracted 16,000 submissions but the Agreement was never implemented.

The voices welcoming the Westminster government’s proposals are those of retired British Army officers, Conservative Party members of parliament — in particular those allied to organisations representing soldiers who formerly served in Northern Ireland — and the right-leaning British popular press. 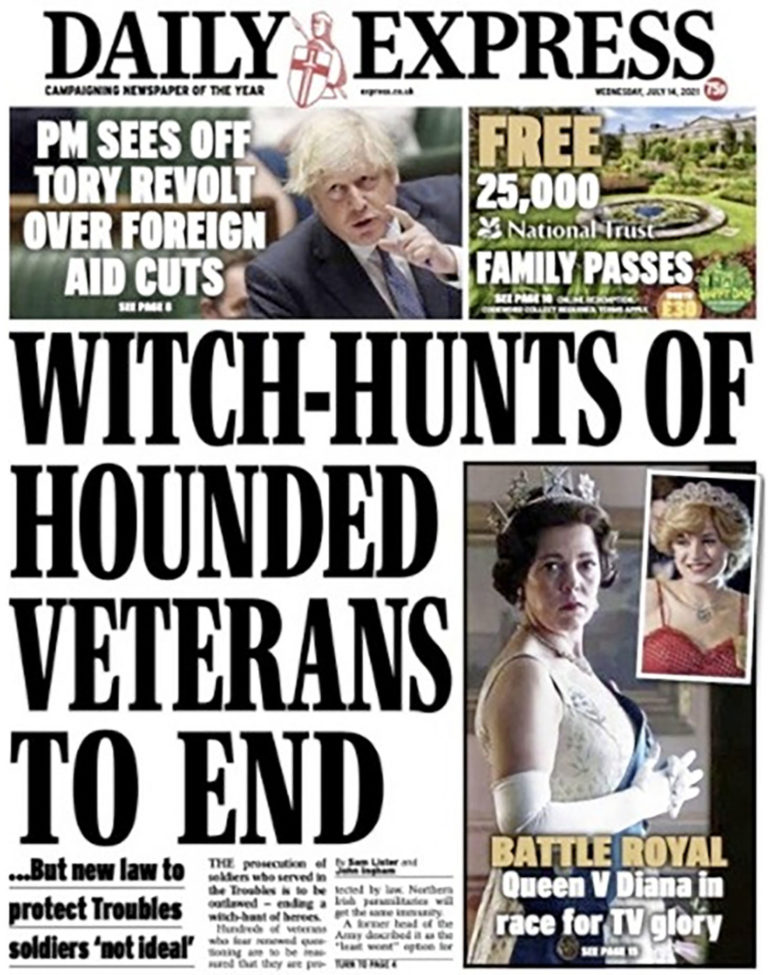 The Daily Express welcomed the proposals.

The U.K. press has largely heralded the proposals as “an end to the witch hunt” of the small number of former soldiers in Northern Ireland against whom charges have been laid and which are waiting to be heard in court.

The proposals are being portrayed by the U.K. government and in the media as being an “amnesty for veterans,” as promised in the Conservative Party election manifesto.

This, along with their timing, just ahead of the summer vacation season, suits London’s interests but the proposals go much, much further. They would end:

As a feeble replacement for closing down every possible available avenue accessing justice, the U.K. government is proposing an “information recovery body” with undefined powers. This is described as “toothless” in a recent joint statement from leading legal academics and human rights groups.

The proposals, they said, appeared “designed to obscure and obfuscate truth recovery and access to justice.” Should all prosecutions, irrespective of the available evidence, be barred, it was “highly unlikely” that any party to the conflict would volunteer information to families.

This was particularly true, they said, of the state, where hard experience over decades has already demonstrated government departments and agencies clamp down and fail to disclose, even under legal obligations, the full truth about their actions during the conflict.

“In short”, the U.K. government’s “proposed mechanism would appear to be designed as a perfect vehicle to prevent the truth from arising”.

Take just one of the avenues families are now using to access justice, that of renewed inquests, which the Northern Ireland Attorney General can grant if new and significant evidence emerges.

The U.K. government’s proposals would mean families who may already have attended up to 30preliminary hearings will now be told the inquest itself cannot go ahead as scheduled.

One inquest, into the deaths of 10 people in 1971 at the hands of British troops — known as the “Ballymurphy Massacre” — did go ahead last year. It concluded this May that the 10 victims were all innocent of any wrongdoing. 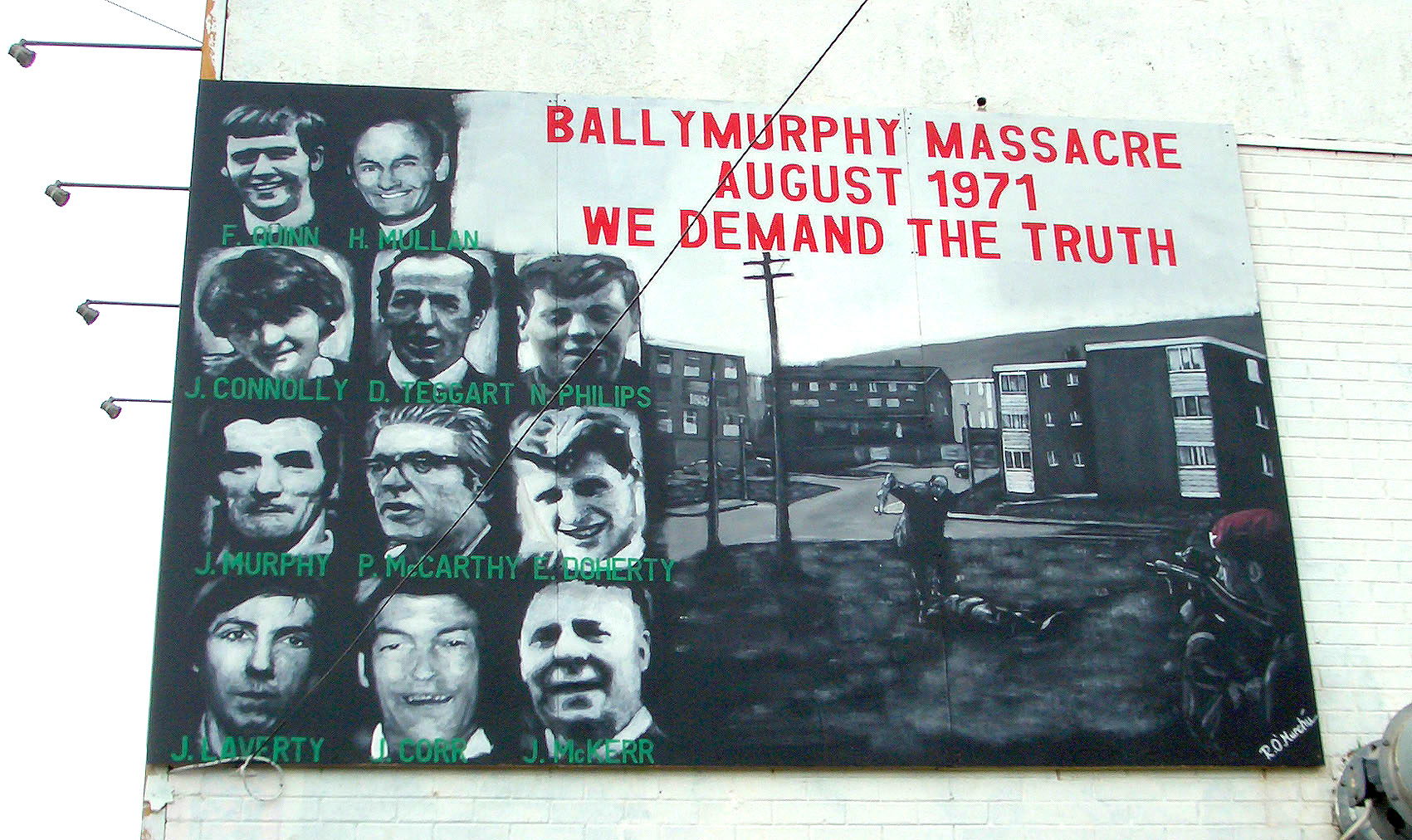 Mural in Belfast, Ireland, commemorating the victims of the Ballymurphy Massacre in 1971. (Wikimedia Commons)

This showed the capacity, even 40 years on, of inquests and investigations to provide some modicum of truth to families.

In another case highlighting the importance of maintaining the current institutions, the Police Ombudsman reported on July 22 an investigation into the 1993 killing of Damien Walsh, a 17-year-old youth shot dead by loyalist paramilitaries.

The report found “significant investigative failures” by the police amounting to “collusive behaviours.” Itsaid Walsh’s killers “were provided with information by a police officer and ‘British Intelligence’ which informed their attack.”

The dead youth’s mother, Marian, had campaigned for nearly three decades, questioning the police role in her son’s shooting. 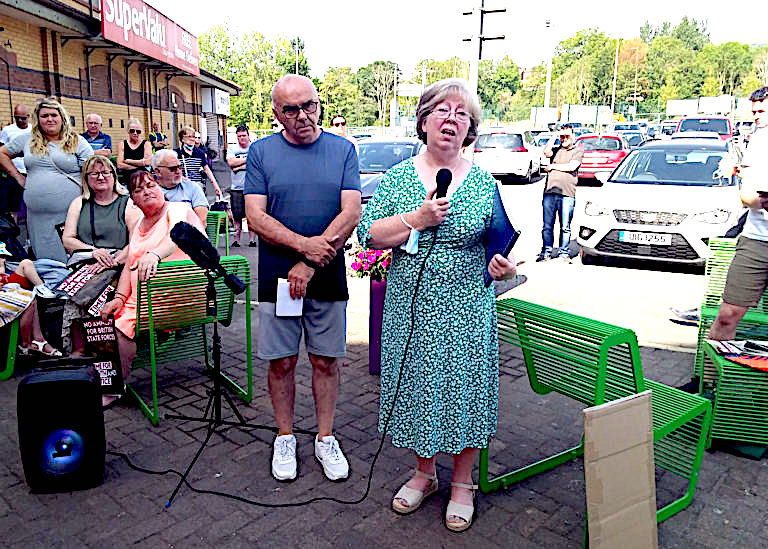 Marian Walsh speaks to supporters following publication of the Ombudsman’s report into her son’s murder. (Time for Truth Campaign)

The Ombudsman’s report found police had also “failed to capitalise on investigative opportunities including failing to arrest suspects” and had made “a deliberate decision” to “disregard intelligence about the threat.”

The Ombudsman, Marie Anderson, has indicated in radio interviews that a number of other reports are in the pipeline, due for publication in coming months. It is understood that several of these will be similarly damning for the police.

Taken together, the Ballymurphy inquest and the Ombudsman’s report into the death of Damien Walsh disprove claims that the judicial and quasi-judicial processes now in place are unable to uncover at least some of the long-buried truth and bring comfort to bereaved families.

This comes against a backdrop of the “profound concern” expressed in 2020 by the Committee of Ministers of the Council of Europe on the U.K.’s delay in implementing the Stormont House Agreement legislation.

This obliges the U.K., under the European Convention on Human Rights, to conduct timely, independent inquiries into any death.

London’s proposals contain significant inaccuracies. They claim, for example, that the police and British Army “were responsible for around 10% of Troubles-related deaths — the vast majority of which were lawful.”

This number is contested but still represents over 300 people, 51 percent of whom were civilians.

But in only four cases have U.K. soldiers been convicted of murders and, in all four cases, they returned, amazingly, to their regiments.

In a ruling earlier this year, a judge said that statements given by soldiers after they killed an unarmed Official IRA man, Joe McCann, in 1972 were inadmissible in court because of the circumstances of the original interviews. 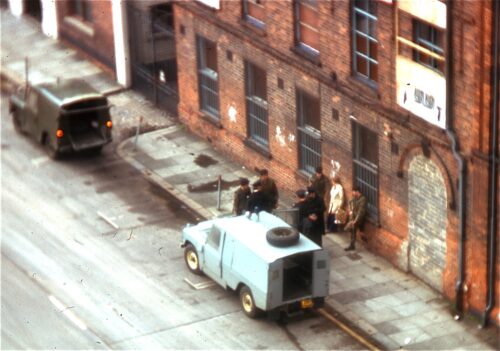 The judge said that “until late 1973, an understanding was in place between the RUC [Royal Ulster Constabulary] and the Army whereby the RUC did not arrest and question, or even take witness statements from, soldiers involved in shootings such as this one.”

The judge added: “This appalling practice was designed, at least in part, to protect soldiers from being prosecuted and in very large measure it succeeded.”

The government’s proposals also fail to outline how a current court action on Britain’s alleged torture of internees carried out in 1971 will be handled.

In the so-called Hooded Men case, 14 internees were selected and subjected to “The Five Techniques” (or “Deep Interrogation”) of hooding, white noise, deprivation of water and food and being forced to lean on their toes and fingertips against a wall prior to interrogation.

This was ruled as torture in a case taken by the Irish state against the U.K. under the European Convention on Human Rights but the ruling was subsequently reduced to “inhuman and degrading treatment”. It remains unresolved.

Torture, in any circumstances, is considered a war crime and cannot be qualified under international law by any statute of limitations.

The small number of legal firms in Northern Ireland who specialise in these “legacy cases” are certain that the U.K. government’s proposals breach the European Convention on Human Rights — but it will take years of litigation in the courts to establish this legally. 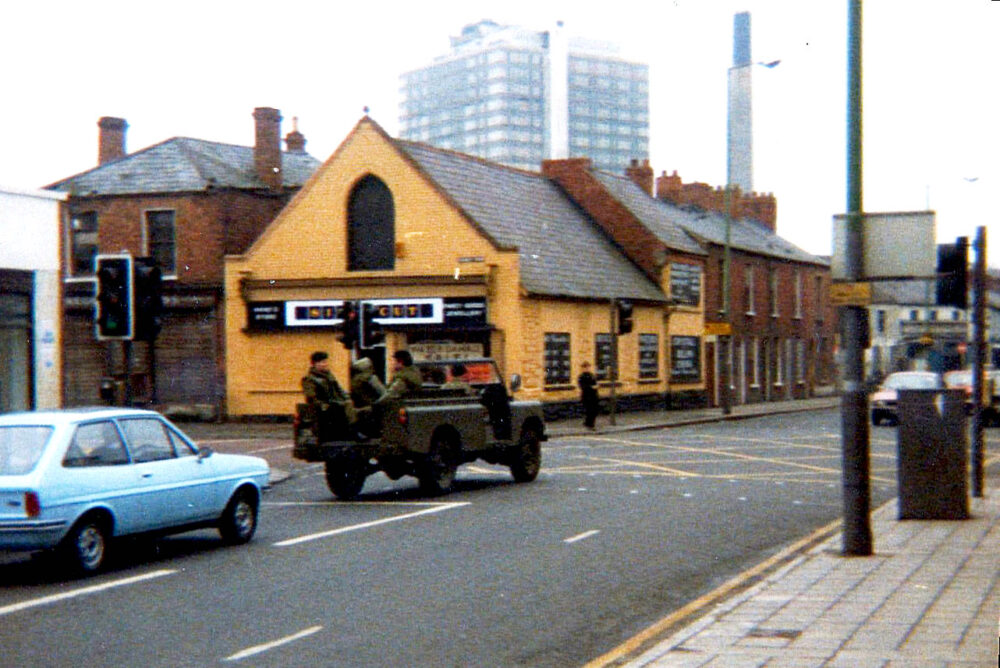 Meanwhile, grieving relatives, who have battled for years in whatever way they can, can die off without the truth they so desperately need and deserve.

Human rights NGOs, political parties, the Irish government and groups advocating on behalf of victims, are planning to lobby politicians in Washington, including President Biden, over the summer and into the autumn in a determined campaign to force a U-turn in London.

Sandra Peake, of the cross-community Wave organisation, which advocates for victims, contradicts London’s claim that its proposals encourage reconciliation. “To tell people who have suffered unimaginable grief and trauma that what happened to their loved ones is no longer of any interest to the state is perverse and obscene,” she said.

One bereaved relative put it even more simply, on realising the significance of the proposals: “They treated us as second-class citizens in life — we won’t let them do the same in death”.

Anne Cadwallader, a former BBC journalist, is an author and advocacy caseworker at the Pat Finucane Centre in Armagh, Northern Ireland.

4 comments for “Impunity for Killings in Service of the State”