Marjorie Cohn explains what the U.S. president can do to alleviate the suffering of the Cuban people. 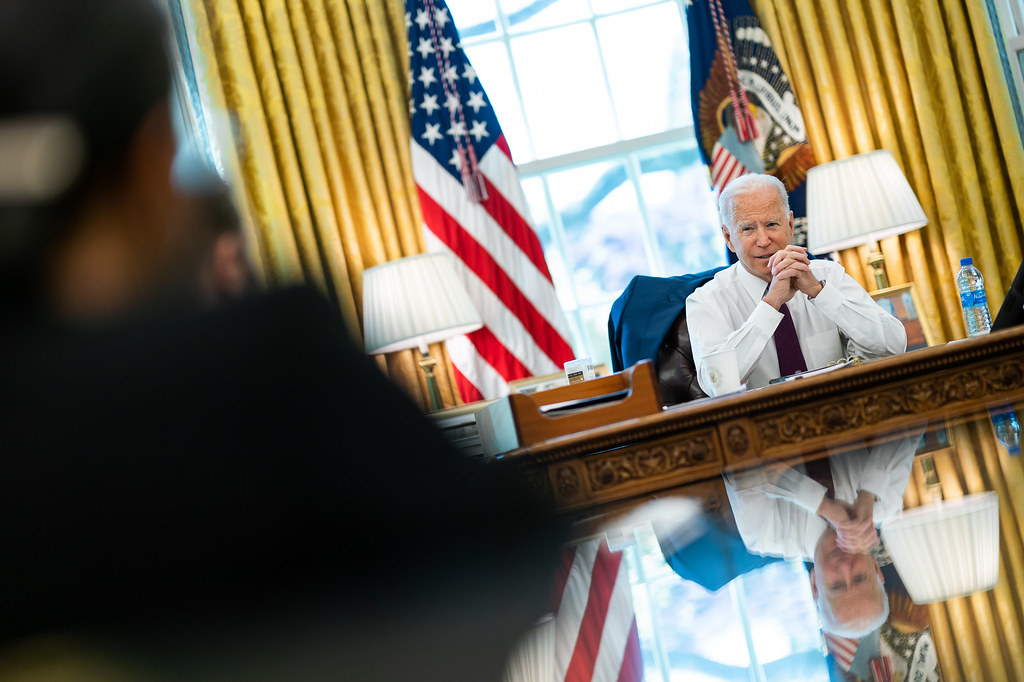 The corporate media have been bashing the Cuban government in response to the recent protests in Cuba, while President Joe Biden claims, “We stand with the Cuban people.” But they ignore or minimize the leading cause of economic suffering in Cuba: the U.S. illegal and punishing economic blockade that Biden has left in place.

Every U.S. president since Dwight D. Eisenhower has maintained the blockade against Cuba. Although former President Barack Obama was constrained by the 1996 Helms-Burton Act from completely lifting the blockade — which is now exclusively within the power of Congress — he took several steps to ease its effects on the Cuban people.

In 2015, Obama loosened restrictions on Americans traveling to Cuba and ended some of the economic prohibitions between the U.S. and Cuba. He removed Cuba from the list of state sponsors of terrorism and facilitated the export of U.S internet hardware and telecommunications. Obama established increased cooperation between the two countries in intelligence-gathering, drug interdiction, scientific research and environmental protection.

But former President Donald Trump reversed the progress Obama had made and imposed 243 onerous new sanctions on Cuba as part of his “maximum pressure” strategy against Cuba. Those punishing sanctions, together with the pandemic, spelled disaster for the Cuban people. Trump also returned Cuba to the list of state sponsors of terrorism.

Trump’s actions included restricting and then stopping remittances from family members outside Cuba. They blocked cruise ships and most flights to Cuba, even though tourism is central to Cuba’s economy. They reinstated a travel ban for U.S. tourists and prevented Cuba from buying medicines and medical supplies on the world market. Trump also slapped sanctions on the transportation of oil to Cuba from Venezuela, which provided one-third of Cuba’s oil in 2019. 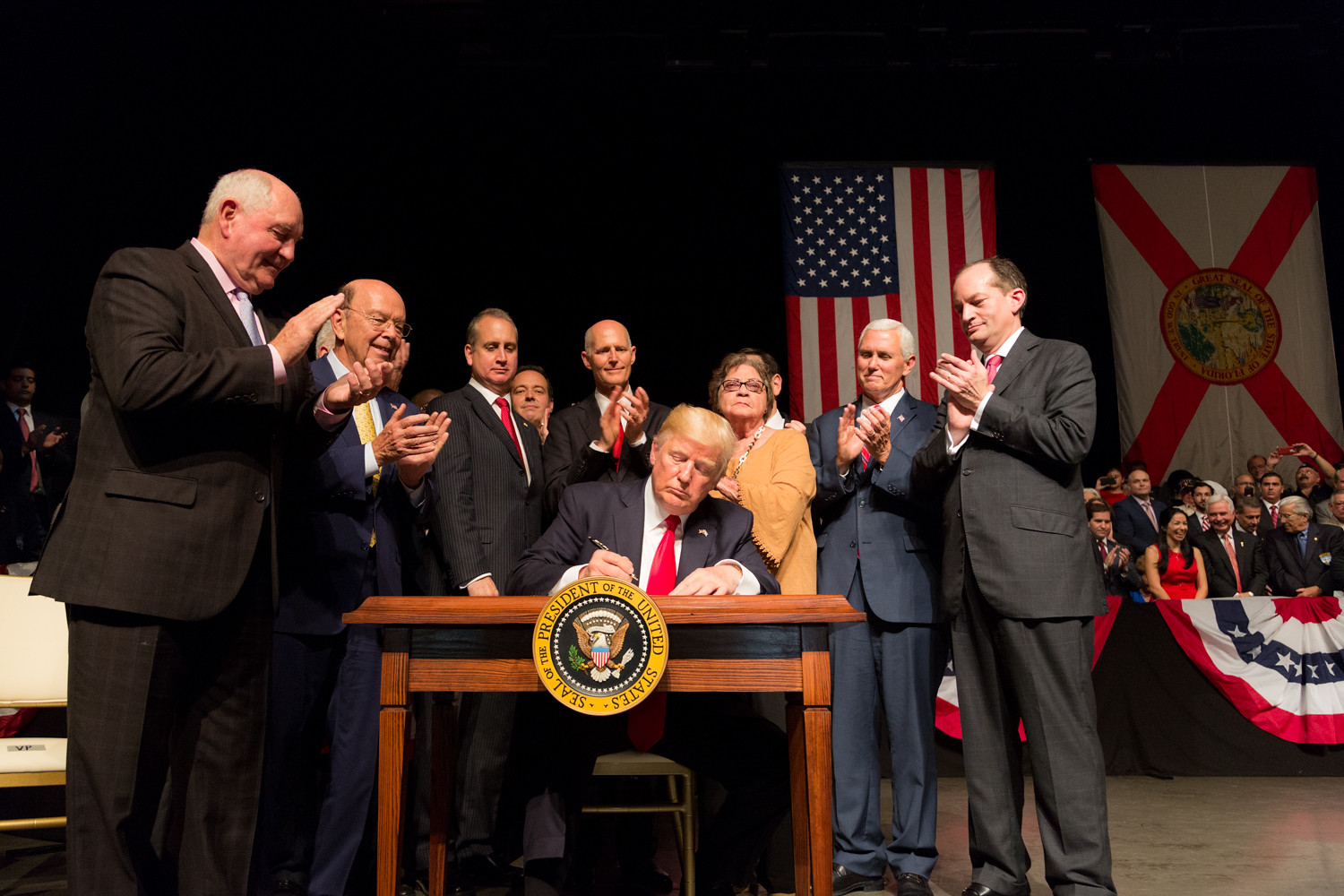 During his presidential campaign, Biden repeatedly hitched his coattails to Obama’s star and promised to lift Trump’s sanctions against Cuba. But Biden has refused to end any of Trump’s sanctions on Cuba, even calling it a “failed state.” Ned Price, a U.S. State Department spokesman, dismissively called the embargo the “so-called embargo” and refused to admit that the ban on remittances was hurting the Cuban economy.

“If President Joe Biden really had humanitarian concerns for the Cuban people he would eliminate the 243 measures applied by President Donald Trump, including 50 imposed cruelly during the pandemic,” Cuban President Miguel Diaz-Canel wrote on his Twitter account.

“[C]urrent events in Cuba are a direct consequence of the interventionism of the US government, be it of the Democratic or Republican Party, and their plans to suffocate the country and cause disorder and chaos, to destroy the Cuban Revolution and its example,” the American Association of Jurists, a nongovernmental organization with consultative status at the United Nations, said in a recent statement.

Indeed, since the 1959 Cuban Revolution, the U.S. government has sustained a cruel economic, financial and commercial embargo against Cuba. By pressuring other countries not to trade with Cuba, it has become a blockade. The U.S. embargo of Cuba was launched by Eisenhower in response to a 1960 memo written by a senior State Department official, which set forth the U.S. strategy for regime change in Cuba. The memo said:

“The only foreseeable means of alienating internal support is through disenchantment and disaffection based on economic dissatisfaction and hardship … every possible means should be undertaken promptly to weaken the economic life of Cuba … a line of action which, while as adroit and inconspicuous as possible, makes the greatest inroads in denying money and supplies to Cuba, to decrease monetary and real wages, to bring about hunger, desperation and overthrow of government.”

For the last six decades, the blockade has caused the Cuban people immense suffering. But it has not succeeded in destroying the Cuban Revolution.

In 1997, the American Association for World Health concluded that the blockade had “dramatically harmed the health and nutrition of large numbers of ordinary Cuban citizens” and “caused a significant rise in suffering — and even deaths — in Cuba” as a result of “critical shortages of even the most basic medicines and medical hardware.”

Over the past six decades, the blockade has caused more than $134 billion in quantifiable losses as of 2018.

The blockade violates the UN Charter, which enshrines the right to self-determination of sovereign states and prohibits forcible regime change.

Sanctions — or unilateral coercive measures — constitute collective punishment of the civilian population, which is prohibited by the Geneva and Hague Conventions. They also violate the Charter of the Organization of American States, which prohibits intervention in the internal or external affairs of another country and the use of economic or political coercive measures “to force the sovereign will of another State.”

Cuban doctors arriving in Italy to help during the pandemic. (Twitter )@JoseCarlosRguez)

The blockade has exacerbated the suffering of the Cuban people during the pandemic. Conditions are dire in Cuba. There are long lines for food, water and supplies. And a gasoline shortage caused by the blockade is preventing food grown in the countryside from reaching the market in the cities.

Speaking to protesters on July 12, Diaz-Canel explained that they have had to convert hotels to hospitals because of the spike in Covid-19 cases. This has caused electricity shortages.

Even before the pandemic, there were serious food, medical and fuel shortages. In 2020, seven UN special rapporteurs and independent experts concluded that the blockade was “obstructing humanitarian responses to help the country’s health-care system fight the Covid-19 pandemic.”

As a result of the pandemic, Cuba is unable to buy ventilators or personal protective equipment. It can’t receive financial transfers from foreign companies and humanitarian organizations. The blockade has had a “drastic effect on Cuba’s vaccine industry” by making it difficult to obtain the raw materials to make the vaccine, according to Oxfam.

“Even so, the state’s generous and long-term investment in health care and education means it was able to develop its own Covid vaccine — only to then face a shortage of syringes, the blockade making it difficult to buy them from manufacturers,” Branko Marcetic wrote at Jacobin.

In March, 80 House Democrats urged Biden to repeal the Trump administration’s “cruel policies against the Cuban people.” They told Biden that, “with the stroke of a pen, you can assist struggling Cuban families and promote a more constructive approach by promptly returning to the Obama–Biden Administration policy of engagement and normalization of relations.”

“The embargo is absurdly cruel and, like too many other U.S. policies targeting Latin Americans, the cruelty is the point,” Rep. Alexandria Ocasio-Cortez (D-New York) said in a statement. “I outright reject the Biden administration’s defense of the embargo. It is never acceptable for us to use cruelty as a point of leverage against every day people.”

Black Lives Matter condemned “the U.S. federal government’s inhumane treatment of Cubans” and urged it “to immediately lift the economic embargo,” which it called a “cruel and inhumane policy, instituted with the explicit intention of destabilizing the country and undermining Cubans’ right to choose their own government,” noting that it is “at the heart of Cuba’s current crisis.”

In June, for the 29th straight year, the United Nations General Assembly condemned the U.S. embargo on Cuba. The vote was 184-2. Only the United States and Israel voted against the resolution.

US Has Defended Terrorism Against Cuba 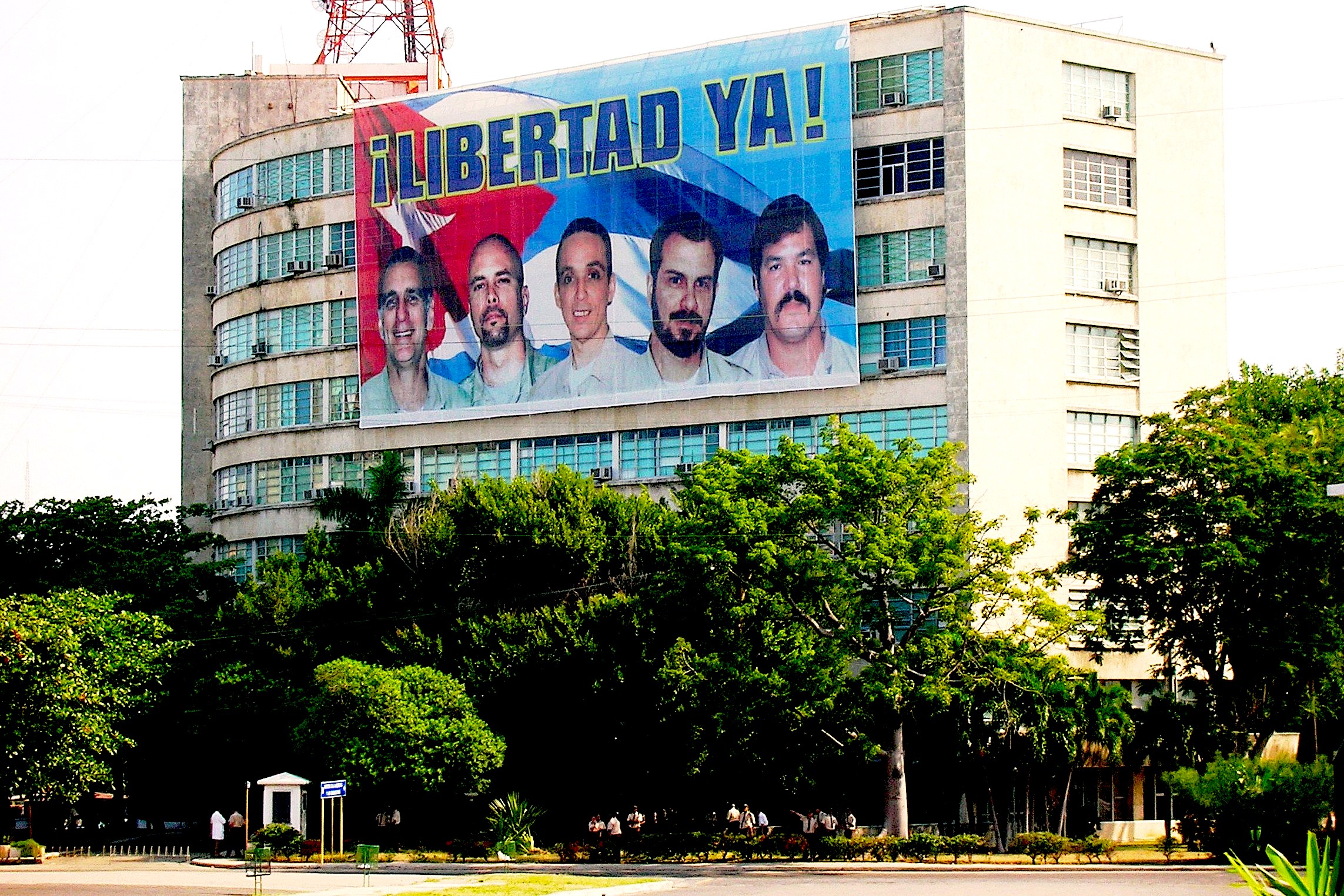 A poster in front of the Plaza de la Revolución, Havana, in 2007 calling for the release of the Cuban Five. (Giorgiopilato, Wikimedia Commons)

Besides its cruel blockade, the U.S. government has encouraged and facilitated terrorism against Cuba while calling Cuba a “state sponsor of terrorism.”

Since 1959, anti-Cuba terror groups based in Miami have carried out several terrorist attacks against Cuba and people who advocated normalizing relations between the U.S. and Cuba. Those terrorist organizations include the Cuban American National Foundation, Alpha 66, Commandos F4, Independent and Democratic Cuba, and Brothers to the Rescue. They have operated with impunity in the United States — with full knowledge and support of the CIA and the FBI.

Luis Posada Carriles planted a bomb on a Cubana airliner in 1976, killing all 73 persons aboard. He has never been criminally prosecuted in the United States even though declassified FBI and CIA documents at the National Security Archive show that Posada Carriles was the mastermind of the airplane bombing.

In the face of this terrorism, five men from Cuba, known as “the Cuban Five,” gathered intelligence in Miami in order to prevent future terrorist acts against Cuba. They peacefully infiltrated criminal exile groups and then turned over the results of their investigation to the FBI. But instead of working with Cuba against terrorism, the U.S. government arrested the five men.

At trial, former high-ranking U.S. military and security officials testified that Cuba posed no military threat to the United States. None of the five Cuban men had any classified material in their possession or committed any acts to injure the United States. They were nonetheless convicted in 2001 of acting as unregistered Cuban agents in the United States and of conspiracy to commit espionage. The Cuban Five were sent to prison for many years and were eventually released.

The Obama administration removed Cuba from the list of state sponsors of terrorism. But Trump added Cuba back onto the list. The 80 House members also urged Biden “to reverse the recent politicized decision by the departing Trump Administration to add Cuba back to the list of State Sponsors of Terrorism. This designation will further damage Cuba’s economy and place another roadblock in your path towards improved relations.” The letter noted that, “Cuba was removed from the list in 2015 after an exhaustive review by experts at the State Department and in the Intelligence Community, and the Trump Administration did not cite any new facts to justify their decision.” Biden says he is reviewing the designation.

It is high time for Biden to make good on his pledge to reverse Trump’s sanctions against Cuba. Congress should listen to all of the countries of the world who have repeatedly urged the lifting of the punishing blockade of Cuba. It is time to end the U.S.’s economic war on Cuba.