John Kiriakou has a problem with the Pentagon using taxpayer money to turn sporting events into nationalistic propaganda. 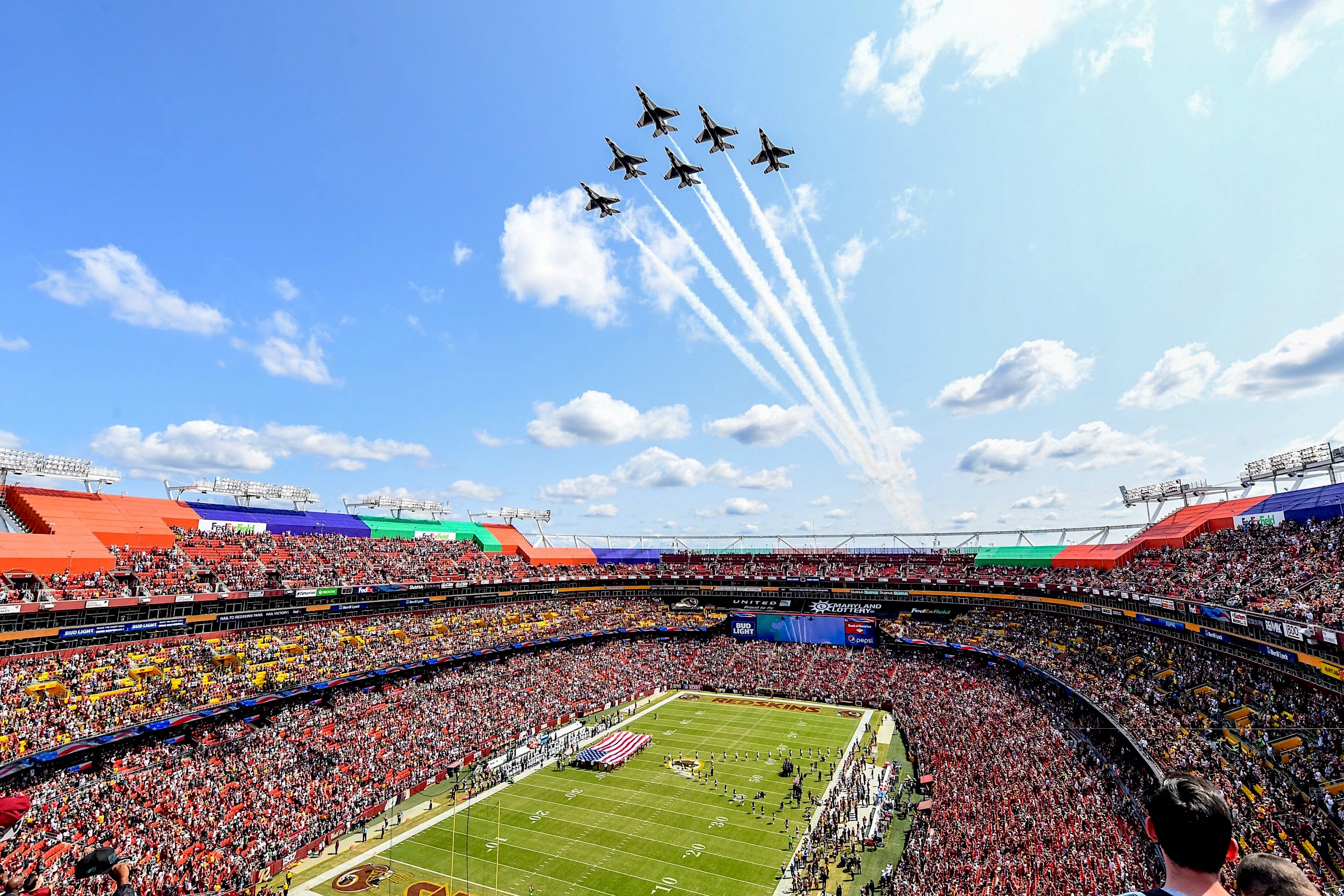 The Air Force Thunderbirds conduct a flyover before a game between the Philadelphia Eagles and the Washington Redskins at FedEx Field in Landover, Maryland, on September 10, 2017. (Ricky Bowden/U.S. Army)

I go to a lot of Major League Baseball games. I really love the sport.

If you’ve been to a baseball game in the past decade, you’ve probably noticed some changes. National Guard members and police color guard units now perform flag ceremonies between innings. Military recruits are enlisted right on the field. Surprise reunions of deployed men and women and their families play out before an audience of thousands. The seventh-inning stretch is dedicated to honoring our “wounded warriors.”

The games have morphed into choreographed patriotic events. Who’s paying for this hoopla? As it turns out, the Pentagon.

A few years ago, then-Arizona Republican senators John McCain and Jeff Flake announced that over the three year period from 2012-2015, the Pentagon shelled out at least $6.8 million for Major League Baseball, the National Football League, and other U.S. sports leagues to “honor” troops with cheap stunts at sporting events. The details are listed in a Senate report.

The total tally may now top $10 million — and even reach $100 million, if you count the military’s marketing deals with NASCAR.

For millions of your tax dollars, the Pentagon is buying things like ceremonial first pitches for recent veterans, club-level seats for vets at football games, and airport greetings for returning service members.

If that sounds crass to you, you’re not alone.

“We appreciate if they honor the men and women in uniform, but not to get paid for it,” the late McCain, himself a decorated war hero, said at the time.

“If the most compelling message about military service we can deliver is the promise of game tickets, gifts, and player appearances,” his report concluded, “we need to rethink our approach to how we are inspiring qualified men and women to military service.” 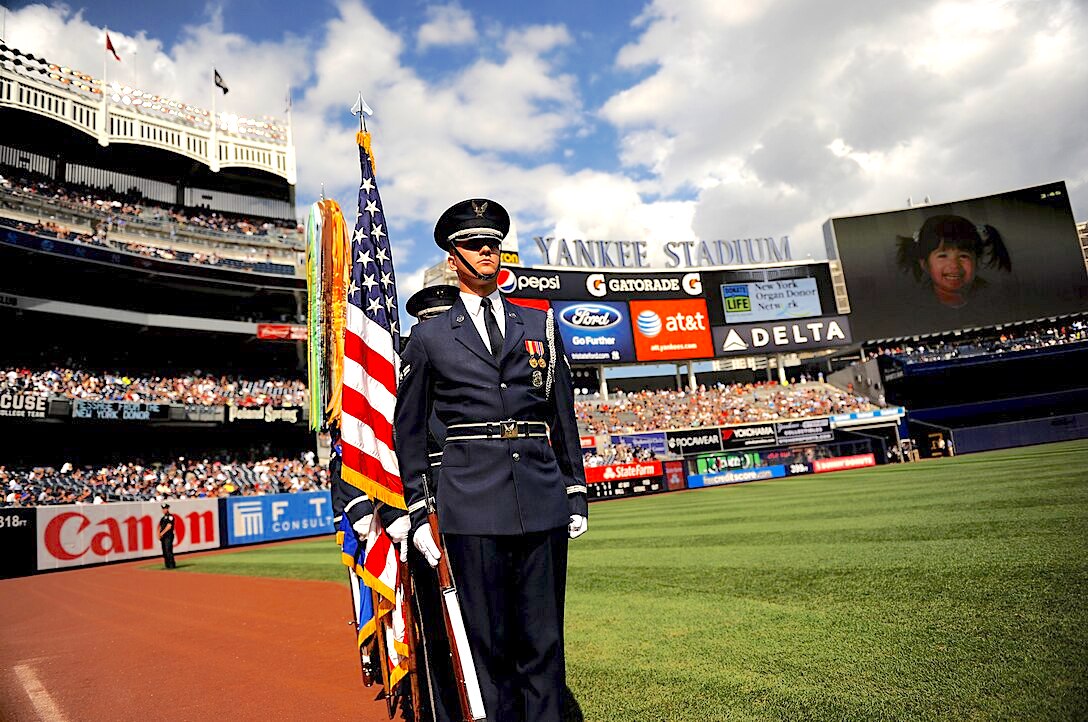 I’d go further than that.

Patriotism can be a good thing. It can be unifying and inspiring. But what we’re seeing at sporting events isn’t patriotism. It’s nationalism — propaganda, even — and it’s potentially dangerous.

The Pentagon even pays for “sponsored” renditions of “God Bless America.”

Irving Berlin wrote that song in 1918 as a show tune for a revue called “Yip Yip Yaphank.” In 1940, it served as the official campaign song for both Franklin Roosevelt and his Republican opponent Wendell Willkie. In the 1950s it was adopted by the fledgling civil rights movement before becoming a rallying cry for supporters of the Vietnam War in the 1960s. Opera singer Kate Smith, as a counter-protest song, sang it in place of the national anthem at Philadelphia Flyers’ ice hockey matches beginning in 1969.

On Sept. 11, 2001, “God Bless America” began a new life when members of Congress sang it on the steps of the Capitol — supposedly spontaneously — as they gathered to mourn the terrorist attacks from earlier that day.

Since then, it has taken on a life of its own and has become an official part of Major League Baseball games. In stadiums around the country, the tune has replaced “Take Me Out to the Ball Game” in group sing-alongs during the seventh-inning stretch.

In fact, this former show tune has become mandatory in some places. In Washington, DC, fans are specifically asked to “stand to honor our troops with a rendition of ‘God Bless America.’”

In 2008, a fan at Yankee Stadium was restrained and then ejected by police officers for attempting to leave his seat for the restroom while the song was playing. The following year, three minor league fans of the now-defunct Newark Bears were ejected from the stadium for refusing to stand during the song.

In 2019, finally, the Yankees stopped playing Smith’s recording of God Bless America, not because it’s forced propaganda, but because journalists found that the singer, who famously sang it for more than a half-century, had also sung racist songs, including one called “That’s Why Darkies Were Born.” Its outrageous lyrics included, “Someone had to pick the cotton, someone had to pick the corn, someone had to slave and be able to sing. That’s why darkies were born.”

Standing for the national anthem is patriotic if it’s freely chosen. Forcing people to stand for “God Bless America” isn’t, and I simply will not stand for it, either literally or figuratively.

This is about more than taxpayer money. I won’t be told what to do. And the government has no business propagandizing the American people.

← The UK’s New Threat to British Journalists
Revealing the Pentagon Papers in Congress — 3: Reading the Papers →