By the time citizens hear about a sale, the export licenses are already approved and Boeing factories are churning out weapons  we’ve never heard of, writes Danaka Katovich. 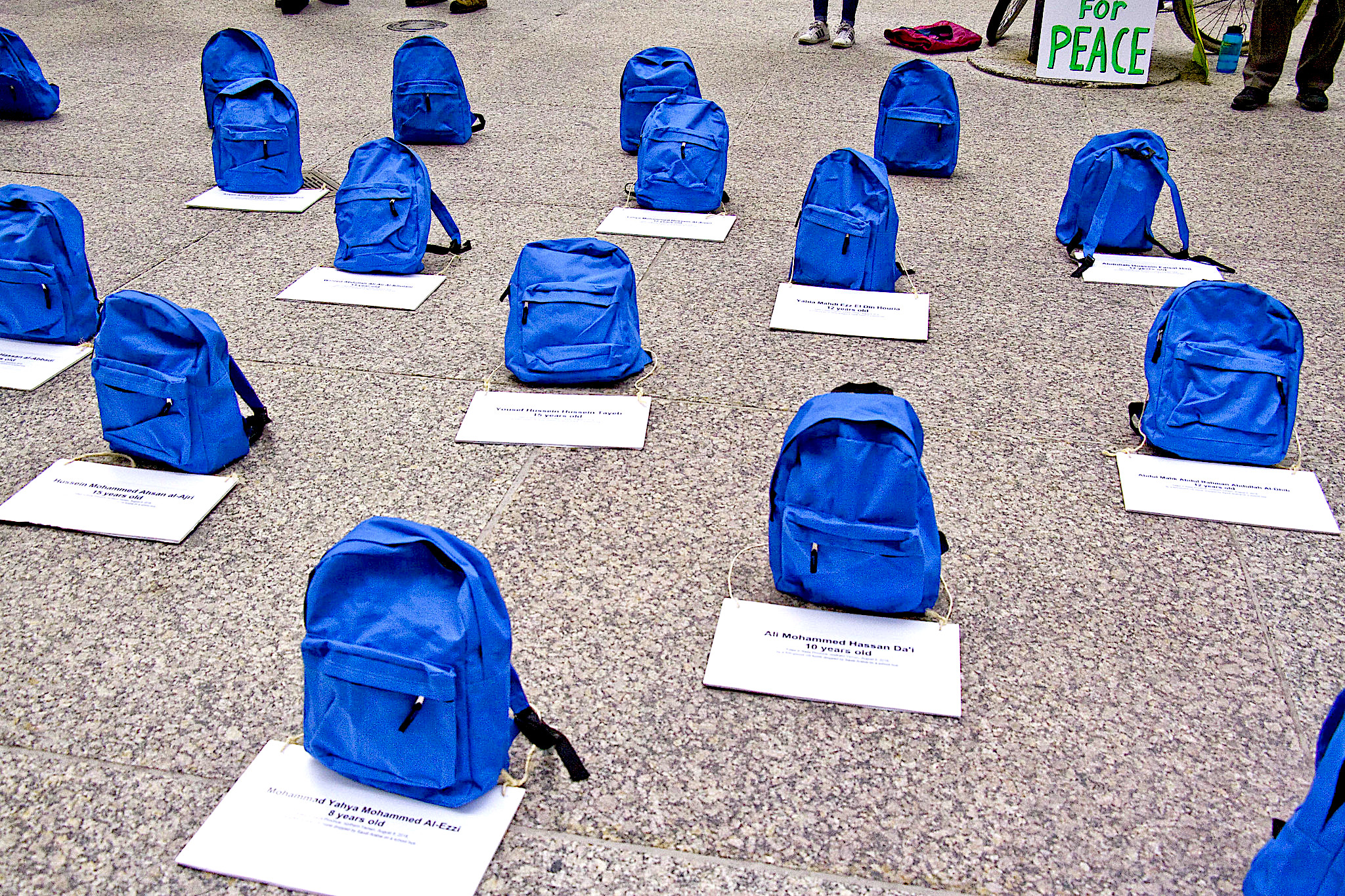 Nov. 30 2018: Chicago protest against the Saudi  attack on a school bus in Yemen. Each backpack stands for a child killed by a Lockheed Martin bomb. (Charles Edward Miller, Flickr, CC BY SA-2.0)

At some point before the summer of 2018, an arms deal from the U.S. to Saudi Arabia was sealed and delivered. A 227kg laser-guided bomb made by Lockheed Martin, one of many thousands, was part of that sale.

On Aug 9, 2018, one of those Lockheed Martin bombs was dropped on a school bus full of Yemeni children. They were on their way to a field trip when their lives came to a sudden end. Amidst shock and grief,  their loved ones would learn that Lockheed Martin was responsible for creating the bomb that murdered their children.

What they might not know is that the United States government (the president and the State Department) approved the sale of the bomb that killed their children, in the process enriching Lockheed Martin, which makes millions in profits from arms sales every year.

While Lockheed Martin profited from the death of 40 Yemeni children that day, top United States weapons companies continue to sell weapons to repressive regimes around the world, killing countless more people in Palestine, Iraq, Afghanistan, Pakistan, and more. And in many cases, the United States public has no idea this is being done in our name to benefit the largest private companies in the world.

Now, the newest $735 million in precision-guided weapons that are being sold to Israel are destined to have a similar fate. The news about this sale broke in the midst of Israel’s most recent assault on Gaza that killed over 200 Palestinians. When Israel attacks Gaza, it does so with U.S.-made bombs and warplanes.

If we condemn the abhorrent destruction of life that occurs when Saudi Arabia or Israel kills people with U.S.-manufactured weapons, what can we do about it?

Arms sales are confusing. Every once in a while, a news story will break about a certain weapons sale from the United States to some other country across the globe that is worth millions, or even billions of dollars. And as Americans, we virtually have no say in where the bombs that say “MADE IN THE USA” go. By the time we hear about a sale, the export licenses are already approved and Boeing factories are churning out weapons we’ve never even heard of.

Even for people who consider themselves well informed about the military-industrial complex find themselves getting lost in the web of procedure and timing of weapons sales. There is a gross lack of transparency and information made available to the American peoples. Generally, here’s how arms sales work:

There is a period of negotiation that takes place between a country that wants to buy weapons and either the U.S. government or a private company like Boeing or Lockheed Martin.

After a deal is reached, the State Department is required by the Arms Export Control Act to notify Congress. After the notification is received by Congress, they have 15 or 30 days to introduce and pass a Resolution of Joint Disapproval to block the issuance of the export license. The amount of days depends on how close the United States is with the country buying the weapons.

For Israel, NATO countries, and a few others, Congress has 15 days to block the sale from going through. Anyone familiar with Congress’s arduous way of doing things may realize that 15 days is not really enough time to carefully consider whether selling millions/billions of dollars in weapons is in the political interest of the United States.

What does this time frame mean for advocates against arms sales? It means that they have a tiny window of opportunity to reach out to members of Congress. Take the most recent and controversial $735 million Boeing sale to Israel as an example. The story broke only a few days before those 15 days were up. Here’s how it happened:

On May 5, 2021, Congress was notified about the sale. However, since the sale was commercial (from Boeing to Israel) instead of government-to-government (from the United States to Israel), there is a greater lack of transparency because there are different procedures for commercial sales.

Then on May 17, with only a few days left in the 15-day period Congress has to block a sale, the story of the sale broke. Responding to the sale on the last day of the 15 days, a joint resolution of disapproval was introduced in the House on May 20. The next day, Sen. Bernie Sanders introduced his legislation to block the sale in the Senate, when the 15 days were up. The export license was already approved by the State Department that same day.

The legislation introduced by Sanders and U.S. Rep. Alexandria Ocasio-Cortez to block the sale was virtually useless as time had run out. 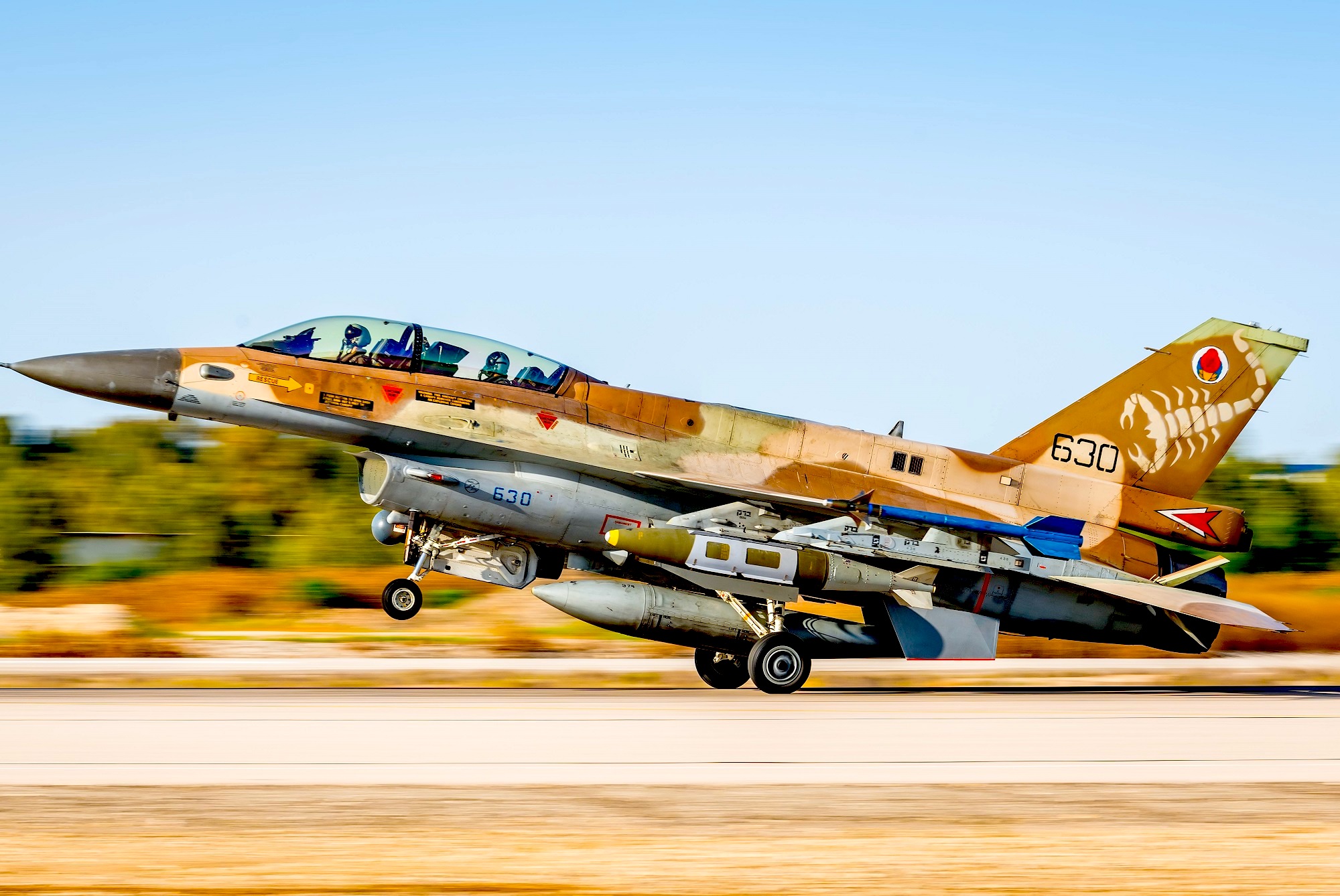 However, all is not lost, as there are several ways a sale can still be stopped after the export license is granted. The State Department can revoke the license, the president can stop the sale, and Congress can introduce specific legislation to block the sale at any point up until the weapons are actually delivered. The last option has never been done before, but there is recent precedent to suggest that it might not be totally pointless to try. 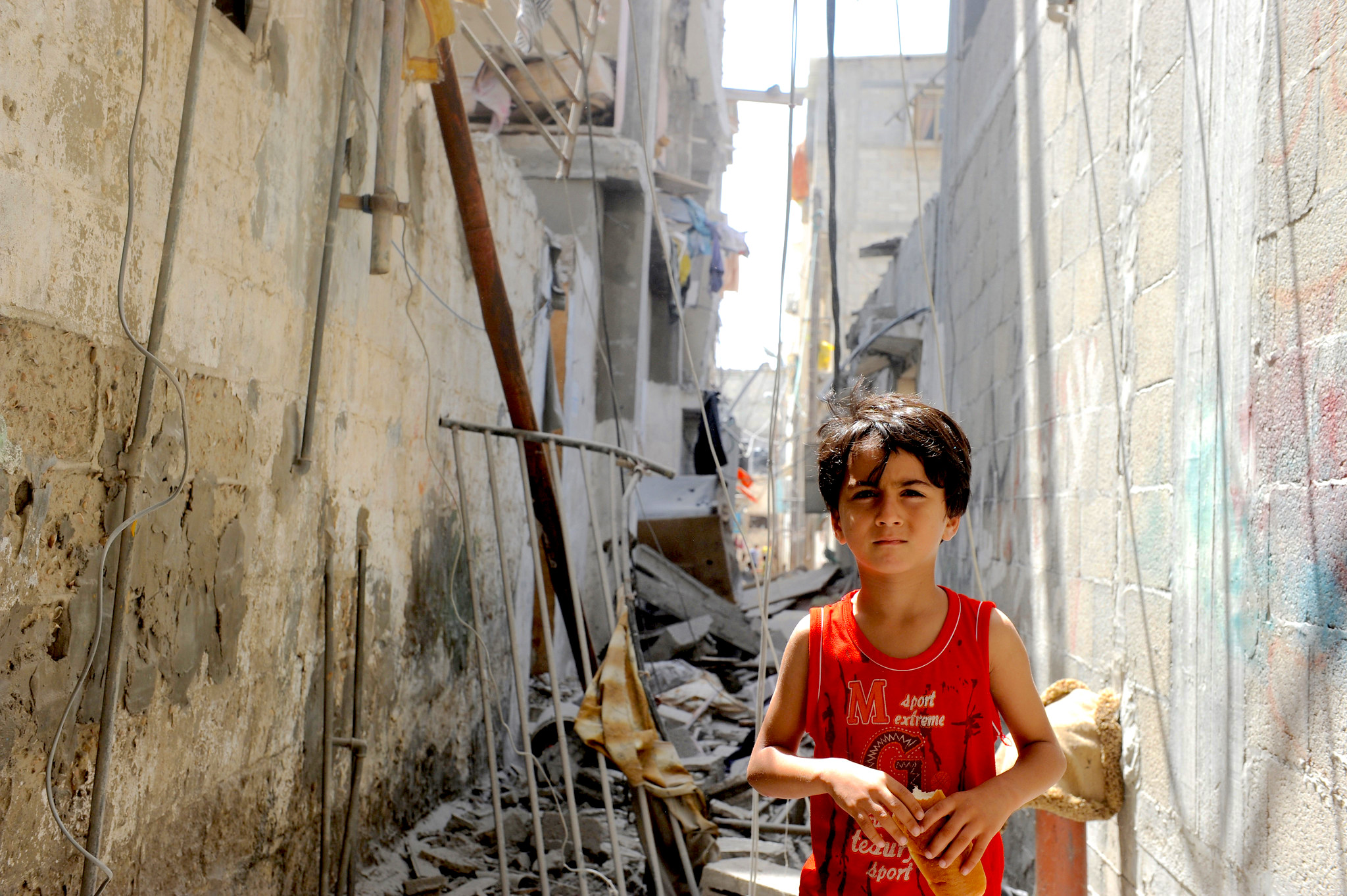 Palestinian boy in walks through the remains of a house targeted by an Israeli air strike near a beach refugee camp west of Gaza City, July 12, 2014. (UN Photo/Shareef Sarhan)

The convoluted and tedious ways arms sales go through raise two important questions. Should we even be selling weapons to these countries in the first place? And does there need to be a fundamental change in the procedure of selling weapons so that Americans can have more of a say?

According to our own law, the United States should not be sending weapons to countries like Israel and Saudi Arabia (among others). Technically, doing so goes against the Foreign Assistance Act, which is one of the main laws governing weapons sales.

Section 502B of the Foreign Assistance Act says that weapons sold by the United States cannot be used for human rights violations. When Saudi Arabia dropped that Lockheed Martin bomb on those Yemeni kids, no argument could be made for “legitimate self defense.”

When the primary target of Saudi airstrikes in Yemen are weddings, funerals, schools, and residential neighborhoods in Sanaa, the United States has no legitimate justification for their use of U.S. manufactured weapons. When Israel uses Boeing joint direct attack munitions to level residential buildings and international media sites, they are not doing so out of “legitimate self defense.”

In this day and age where videos of U.S. allies committing war crimes are readily available on Twitter or Instagram, no one can claim that they don’t know what U.S.-made weapons are used for around the world.

As it stands, our economy benefits from selling tools of destruction to other countries. That is something Americans must realize and ask if there is a better way to be a part of the world. The next steps for people who are concerned about this newest arms sale to Israel should be petitioning the State Department and asking their members of Congress to introduce legislation to block the sale.

7 comments for “Arms Sales: What Americans Know About Bombs Dropped in Their Name”