Caitlin Johnstone responds to the latest rebuke of progressive House member Ilhan Omar by members of her own party. 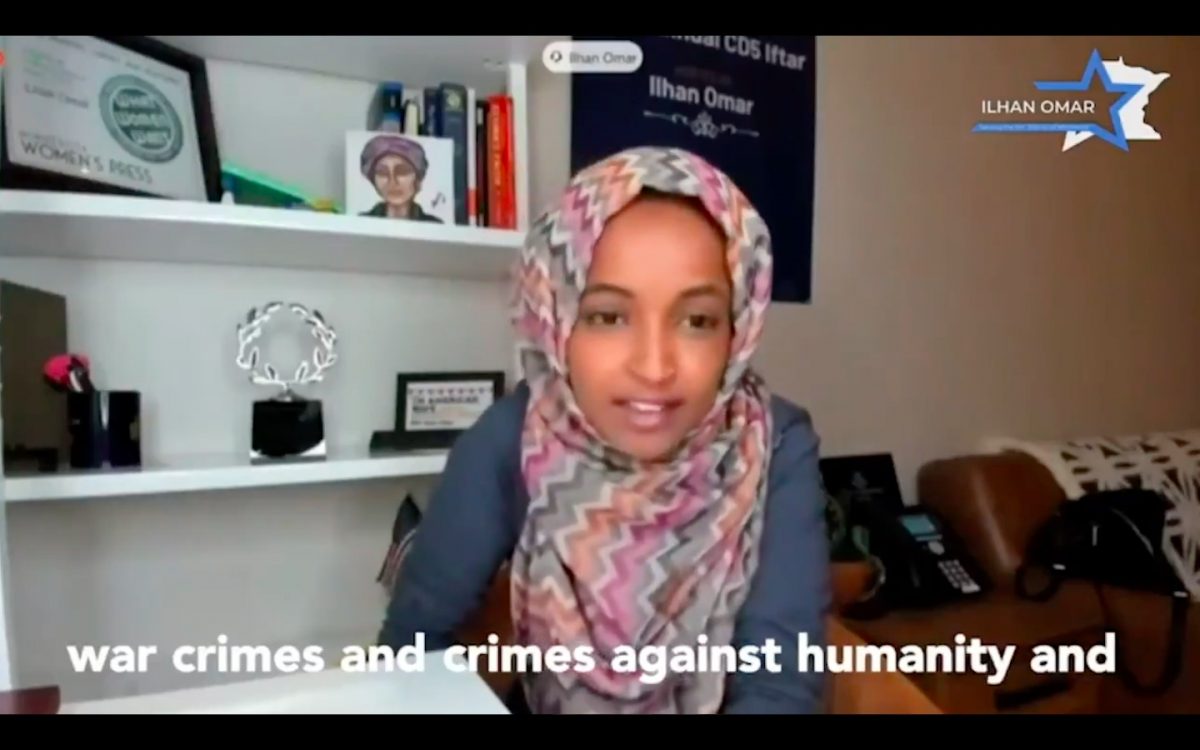 Minnesota’s U.S. Rep. Ilhan Omar has once again been the center of an artificial controversy launched in bad faith, this time over a tweet in which she mentioned the United States and Israel in the same breath as Hamas and the Taliban as perpetrators of “unthinkable atrocities.”

“We must have the same level of accountability and justice for all victims of crimes against humanity. We have seen unthinkable atrocities committed by the U.S., Hamas, Israel, Afghanistan, and the Taliban,” Omar said while sharing a video of her wildly unsuccessful effort to get a straight answer from Secretary of State Tony Blinken on accountability for U.S. and Israeli war crimes.

[Listen to a reading of this article]

This provoked a bunch of ridiculous garment-rending histrionics from Nancy Pelosi and House Democrats, not because it is absurd to compare murderous warmongering regimes like the U.S. and Israel with vastly less destructive regional forces like Hamas and the Taliban, but because it is considered unacceptable in mainstream politics to suggest that the U.S. and Israel are anything other than beneficent powers who at worst make the occasional innocent oopsie.

We must have the same level of accountability and justice for all victims of crimes against humanity.

We have seen unthinkable atrocities committed by the U.S., Hamas, Israel, Afghanistan, and the Taliban.

I asked @SecBlinken where people are supposed to go for justice. pic.twitter.com/tUtxW5cIow

This pathetically mild criticism of a power structure which has killed millions and displaced tens of millions just in the last two decades, during a pathetically unsuccessful attempt to get any kind of concession about war crimes and crimes against humanity from a prominent U.S. official, drew so much outrage and vitriol from the U.S. political/media class that Omar was once again forced to issue another pathetic walkback of her comments.

“On Monday, I asked Secretary of State Antony Blinken about ongoing International Criminal Court investigations,” Omar said in a statement on her congressional website. “To be clear: the conversation was about accountability for specific incidents regarding those ICC cases, not a moral comparison between Hamas and the Taliban and the U.S. and Israel.  I was in no way equating terrorist organizations with democratic countries with well-established judicial systems.”

And that is it, ladies and gentlemen. That is as far as you are allowed to take criticism of the empire in mainstream American politics. Even that level of feeble, impotent criticism is far outside the boundaries for anyone in the mainstream political/media class.

So, in case it wasn’t already clear to you, progressive Democrats are a joke. They’re not a real thing. If they are literally barred from even meaningfully criticizing the U.S. empire, let alone actually working to dismantle it, they’re a joke. They will never succeed in advancing any kind of real progressive agenda.

There’s this unspoken and unquestioned assumption among progressive Democrats that it is possible to advance progressive agendas without actually ending the U.S. empire. That you don’t need to actually dismantle the U.S. empire and strip down its military to the bare bones in order to get nice things like universal healthcare, a living wage and more ethical behavior on the world stage.

This is pure fantasy. It will never happen.

the US is a significantly more violent and destructive terrorist organization than Hamas. This is not remotely controversial

As long as the U.S. is the center of a globe-spanning empire, it will be necessary to keep Americans too poor, too busy and too confused to interfere with the operation of the machine. You cannot allow a critical mass of Americans to have enough money to spend on political campaign donations, to have enough free time to research what’s actually happening in their world, to be sufficiently stress-free to look up and realize that your government is murdering children in their name, and also keep the empire running smoothly. You cannot have an imperialist oligarchy who runs things and also have income and wealth equality.

The empire feeds on oppression, exploitation, ignorance and blood. It is impossible to dominate the planet with a unipolar world order if you don’t use violent force, and the threat of violent force, to uphold that world order. If you’re not strangling people at home and bombing people abroad, then you cannot have an oligarchic empire. Period.

This is how you can tell who is for real and who is not: do they want to dismantle the oligarchic empire, or don’t they? If they do, they’re fighting for something real, but the oligarch-owned political/media class will not give them a platform. If they don’t, they may get a punditry job or a seat in congress, but they won’t ever actually give you anything besides feel-good empty narrative fluff.

"Seize control of the narrative."https://t.co/TElXuByjLh

The solution, as I always point out, is to work together to destroy and discredit the oligarchic propaganda apparatus which enables the empire to determine who gets a platform and who doesn’t. As long as they are able to uplift vapid fauxgressives who pretend it’s possible to have a kinder, gentler U.S. empire and marginalize people who actually want to dismantle the status quo, there will never be enough public awareness to force real change. All positive changes in human behavior are always the direct result of an expansion of awareness, so spreading awareness of the fact that there is an oligarchic empire which is exploiting and deceiving everyone should be the foremost priority of anyone who wants real change.

← WATCH: US Tour for Assange Hits Washington, DC
Arms Sales: What Americans Know About Bombs Dropped in Their Name →

16 comments for “A Kinder, Gentler US Empire Is Not Possible”