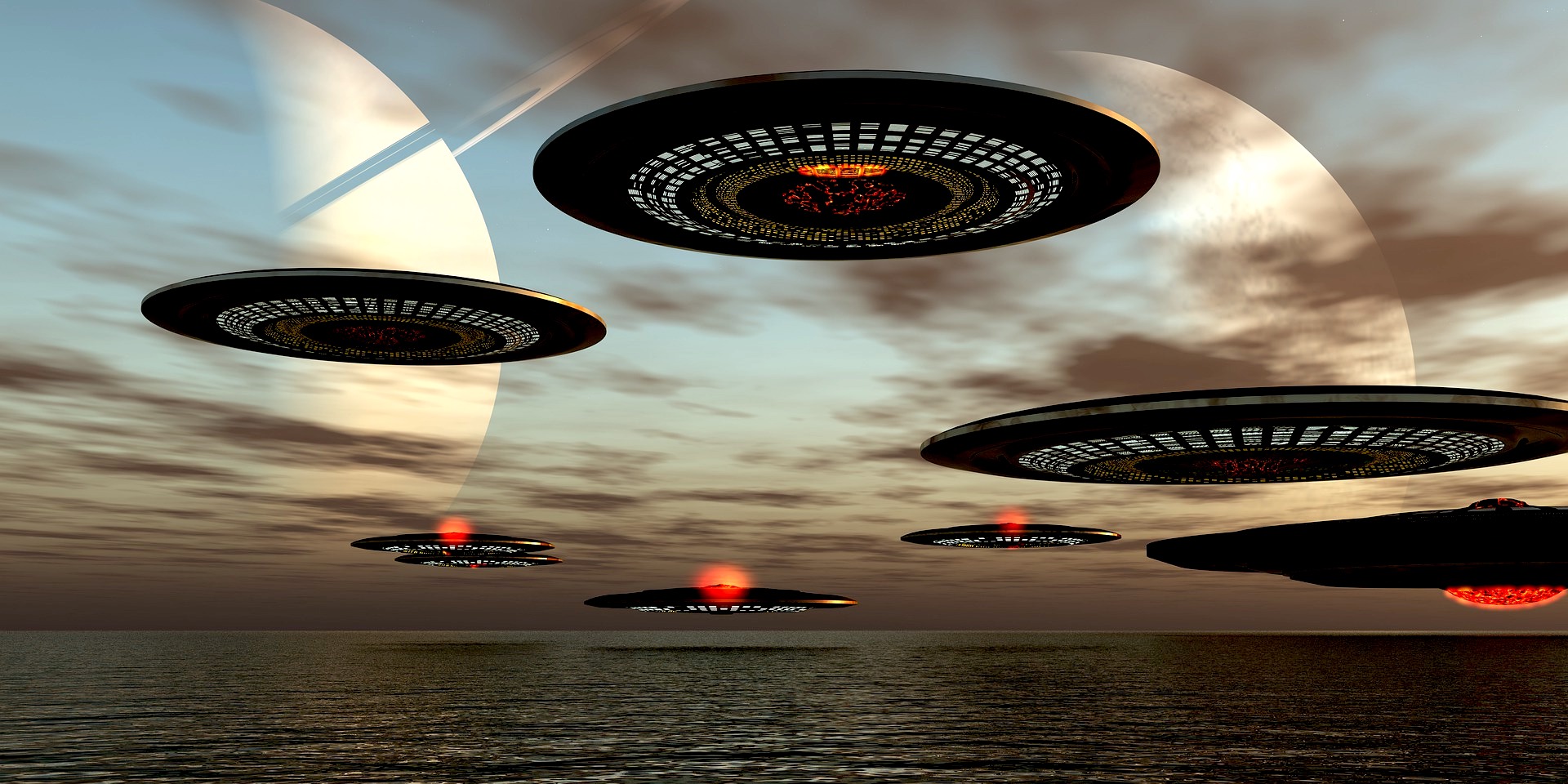 The New York Times has published an article on the contents of the hotly anticipated U.S. government report on UFOs, as per usual based on statements of anonymous officials, and as per usual promoting narratives that are convenient for imperialists and war profiteers.

Together with one voice, the anonymous U.S. officials and the “paper of record” — which is supposed to scrutinize U.S. officials — assure us definitively that the mysterious aerial phenomena that have reportedly been witnessed by military personnel are certainly not any kind of secret U.S. technology, but could totally be aliens and could definitely be a sign that the Russians or Chinese have severely lapped America’s lagging military development.

“The report determines that a vast majority of more than 120 incidents over the past two decades did not originate from any American military or other advanced U.S. government technology,” NYT was reportedly told by the officials. “That determination would appear to eliminate the possibility that Navy pilots who reported seeing unexplained aircraft might have encountered programs the government meant to keep secret. 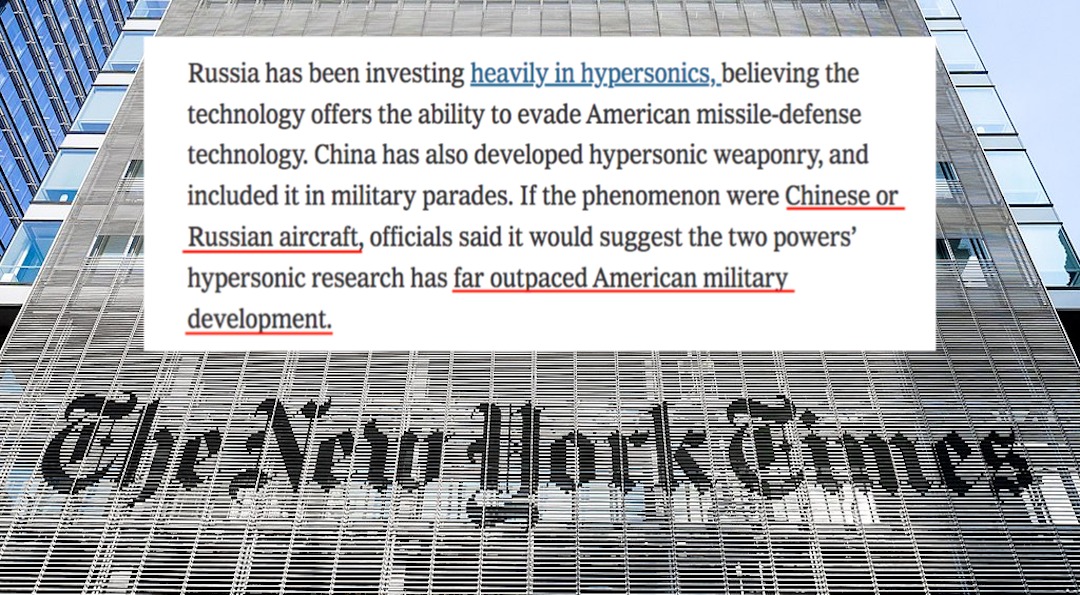 One senior official said without hesitation that U.S. officials knew it was not American technology.

He said there was worry among intelligence and military officials that China or Russia could be experimenting with hypersonic technology https://t.co/bgYtohKC9O

“Intelligence officials believe at least some of the aerial phenomena could have been experimental technology from a rival power, most likely Russia or China,” the Times reports. “One senior official briefed on the intelligence said without hesitation that U.S. officials knew it was not American technology. He said there was worry among intelligence and military officials that China or Russia could be experimenting with hypersonic technology.”

“Russia has been investing heavily in hypersonics, believing the technology offers it the ability to evade American missile-defense technology,” NYT adds. “China has also developed hypersonic weaponry, and included it in military parades. If the phenomena were Chinese or Russian aircraft, officials said, that would suggest the two powers’ hypersonic research had far outpaced American military development.”

The article goes on to describe how the U.S.  military have been “unsettled” by aircraft moving and behaving in ways known technologies cannot explain. The implication of scary foreign adversaries having “outpaced American military development” to such an extent is of course that the U.S.  military is going to require a far bigger budget with far more intensive weapons development.

This would be the same New York Times that has consistently supported all of the U.S. military’s devastating acts of mass murder around the world, by the way.

This won’t be the last time we hear the imperial media warning us that UFOs may be a sign of a frightening gap in technology leaving the U.S.  defenseless against far more powerful foreign foes, and they’ve already been priming us for it. The Republican version of Rachel Maddow, aka Tucker Carlson, has been shrilly pushing this narrative for weeks now and demanding that the U.S.  government do more to address the fact that in alleged encounters with these aircraft, “our military was completely outmatched technologically by whatever these were.”

“UFOs, it turns out, are real, and whatever else they are, they’re a prima facie challenge to the United States military,” Carlson said on a segment last month. “They’re doing things the U.S. military does not allow, and they’re doing it with impunity. And they appear to be focused on the U.S. military.”

“Why isn’t the Pentagon more focused on this? It seems like a threat if there ever was one,” Carlson huffed.

In another segment Carlson had on military intelligence veteran Luis Elizondo, a leading figure in the steadily intensifying new UFO narrative which kicked off in 2017, claiming the aforementioned Senate report on the subject will reveal “an intelligence failure on the part of the U.S.  intel community on the level of 9/11.”

“If there’s a foreign adversary that can put a nuclear warhead within moments over Washington, D.C., OK, that’s a problem,” Elizondo told Carlson’s Fox News audience.

All this over some completely unverifiable testimony, and a few videos being confirmed by the Pentagon which can all be explained by easily identifiable mundane phenomena.

I can’t predict the future, but I won’t be at all surprised if we begin seeing this arms race angle become the dominant aspect of this UFO story in the coming months/years. It would certainly fit the pattern of the U.S.  war machine and mass media promoting completely unverifiable allegations about foreign governments to justify further cold war escalations.

In the early sixties President John F Kennedy falsely promoted the “missile gap” narrative, telling the public that the Soviet Union had surpassed the United States in nuclear weapons when he knew full well the U.S.  nuclear arsenal had always far surpassed the U.S.S.R.’s in number, quality and deployment.

Kennedy used this hawkish narrative to win an election and advance the largest peacetime expansion of U.S.  military power ever, leading directly to the events which gave rise to the Cuban Missile Crisis which came far closer to ending our world than most of us like to think about.

I have no idea what if anything is going on with these UFO phenomena, but I do know the world-threatening new cold war the U.S.  is waging against Russia and China is insane. There is no valid reason our planet’s dominant power structures cannot at the very least cease brandishing armageddon weapons at each other and begin collaborating toward a better world together.

Reject the propagandists and Cold Warriors, no matter how elaborate or bizarre their manipulations become.

← Was There a Wuhan Lab Leak?
Former British Minister: ‘Israelis Think They Control the Foreign Office. And They do!’ →