When war is profit, death ensures a healthy bottom line, writes Christian Sorensen in this  final installment of his five-part series on the military-industrial-congressional complex. 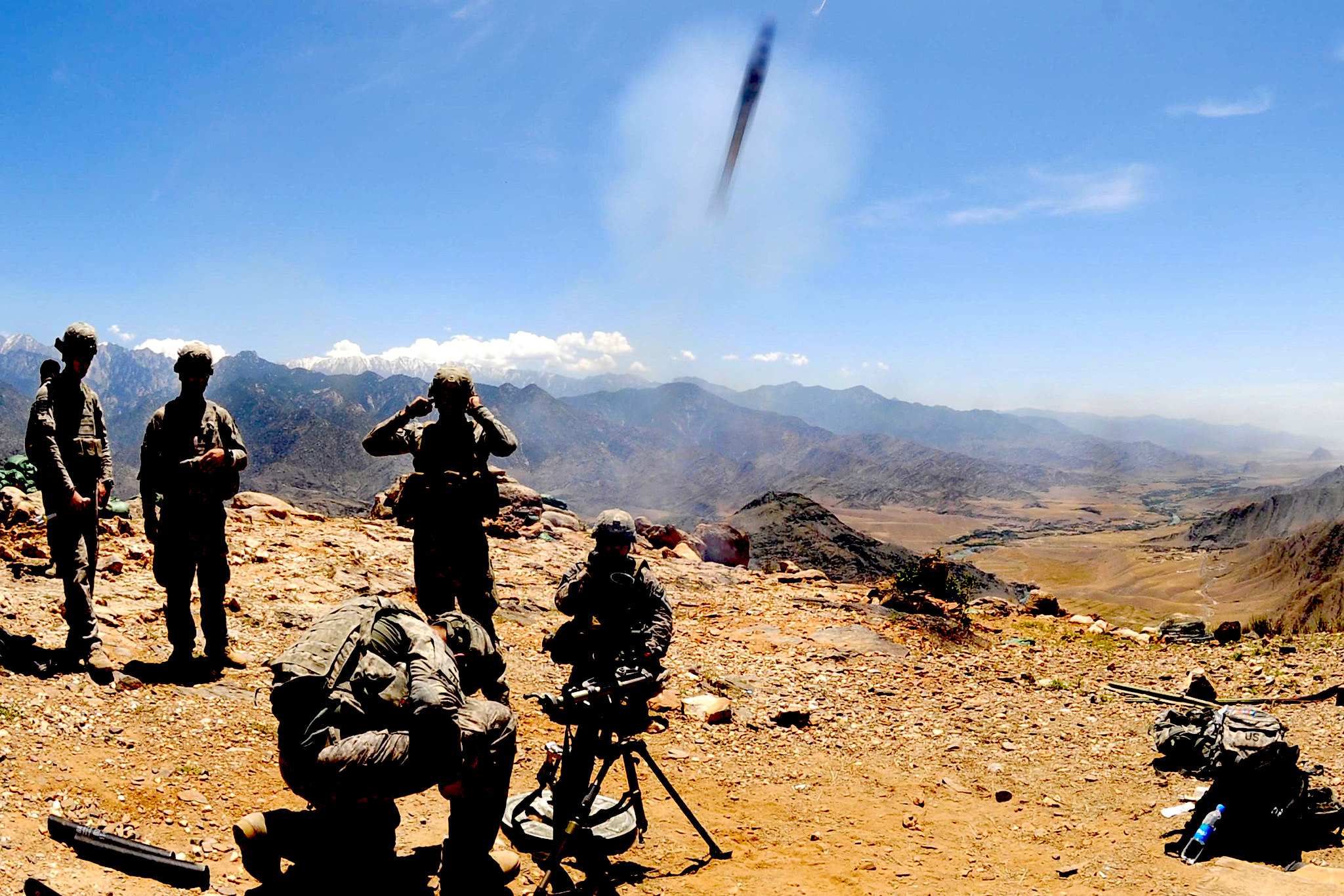 Without looking at military adventurism through the lens of the corporation, analysts are bound to produce error-filled studies. For example, one analyst contended in an interview on The Real News Network, “Military force is almost never going to achieve your political aims. The Americans learned this in Vietnam. They’re learning it in Afghanistan. They’re learning it in Syria… So [President Barack] Obama supporting the Saudis and Emiratis in Yemen is a sign really of incoherence on the part of the United States.”

Far from incoherence, the behavior actually is quite rational. A variety of conflicts, disparate and some seemingly futile, is precisely the aim. Conflict itself — producing untold mountains of profit for war corporations and Wall Street — is the goal.

Recall that capital is money used to expand business in order to make more profit. Capital isn’t just building new factories to produce more goods from which to profit.

Capital is also putting money toward cultivating and promoting politicians who advocate for wars and broad military deployments; media and think tanks to propagandize and generate militant narratives; attaining through neoliberal economic policies a U.S. military establishment so rife with corporations that it becomes one bloated, self-sustaining, profitable entity; arranging industry pressure groups and think tanks to encourage and award high-ranking military officers who support and extend conflicts overseas; and marketing, pushing, and operating goods and services that harm populations and destabilize countries around the world, generating more profitable conflict. 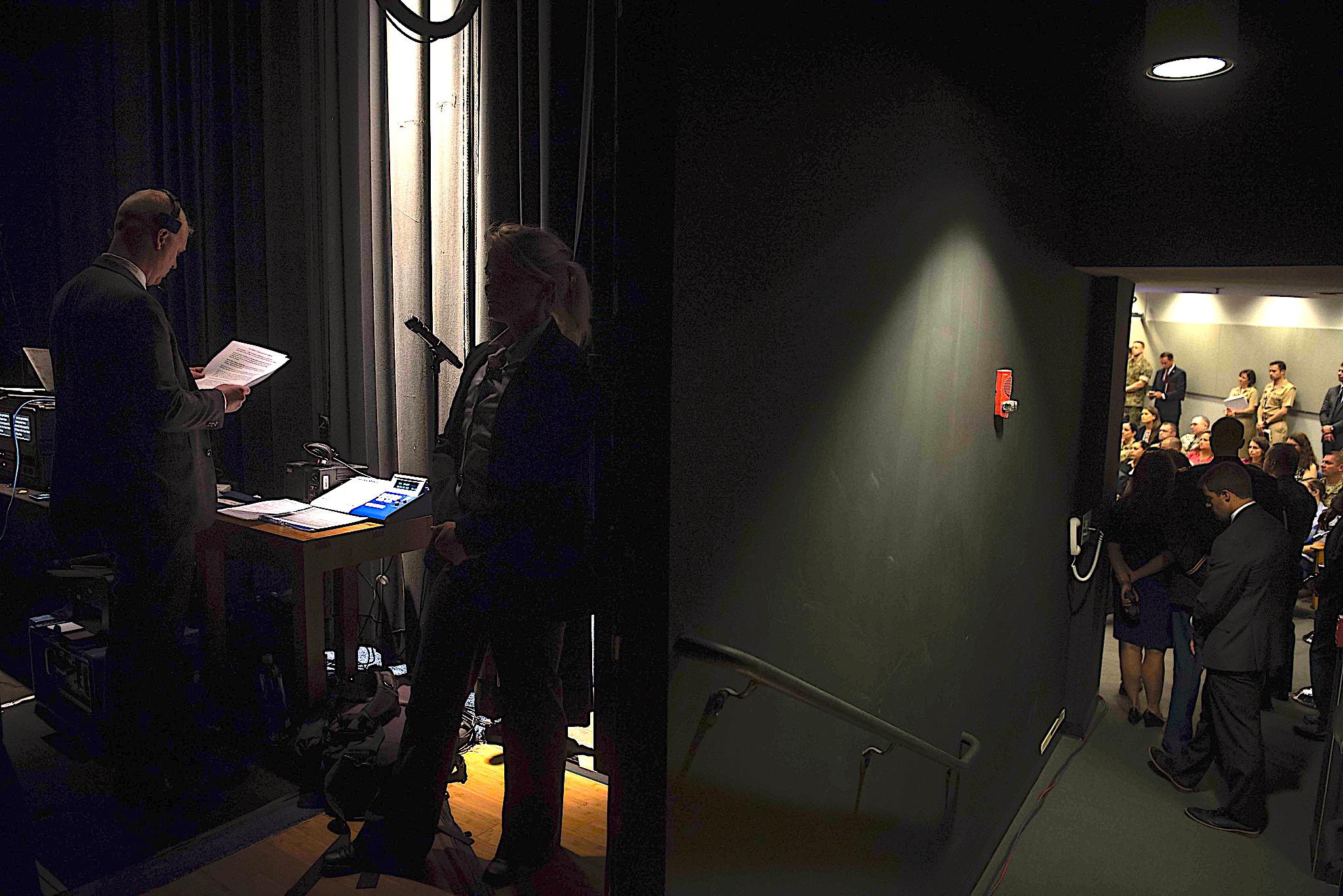 Industry’s products monitor, control and destroy populations. The particular goods and services selected are not the point here. The real rub is that from the eyes of the corporate suite, conflict must endure. Peace is not profitable. A strong portfolio of conflicts, which vary in intensity and scope, is what industry has achieved. Global capitalism demands infinite growth. War corporations’ portfolio approach demands endless, dispersed armed conflicts of varying intensity. 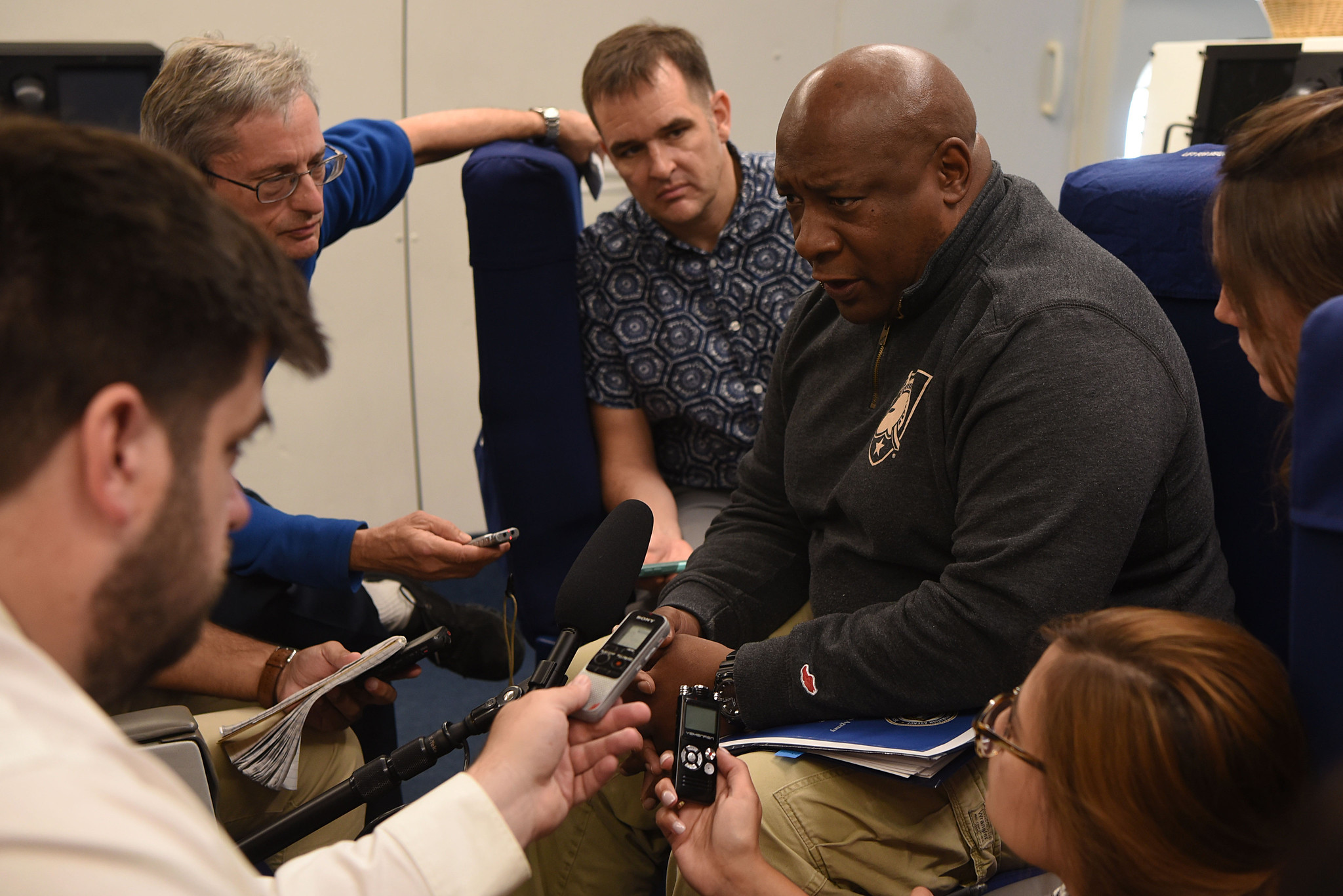 The U.S. war industry sells to capitalist regimes around the world through direct commercial sales and foreign military sales (FMS). FMS tend to deal with big-ticket items or goods and services of a sensitive nature. Through FMS, the U.S. government procures and transfers industry goods and services to allied governments and international organizations.

The Defense Security Cooperation Agency (DSCA) is the intermediary between the U.S. war industry and the FMS customer overseas. On any given day, DSCA is managing “14,000 open foreign military sales cases with 185 countries,” Lt. Gen. Charles Hooper explained at the Brookings Institution in 2019.

Violent and oppressive regimes are frequent customers, including London, Riyadh, Abu Dhabi and Tel Aviv. The Leahy Law, which is intended to prevent U.S. military assistance from reaching militaries that have committed serious human rights violations, is almost never enforced when it comes to FMS. The Arms Export Control Act requires recipients of U.S. war industry goods and services to use them only in self-defense.

So, customers of the U.S. war industry typically affirm that they’re using the goods and services in self-defense, and the U.S. government doesn’t press them on the matter. After all, there is a lot of cash at stake. In fiscal year 2020 alone, the war industry sold $50.8 billion through FMS and $124.3 billion through direct commercial sales. 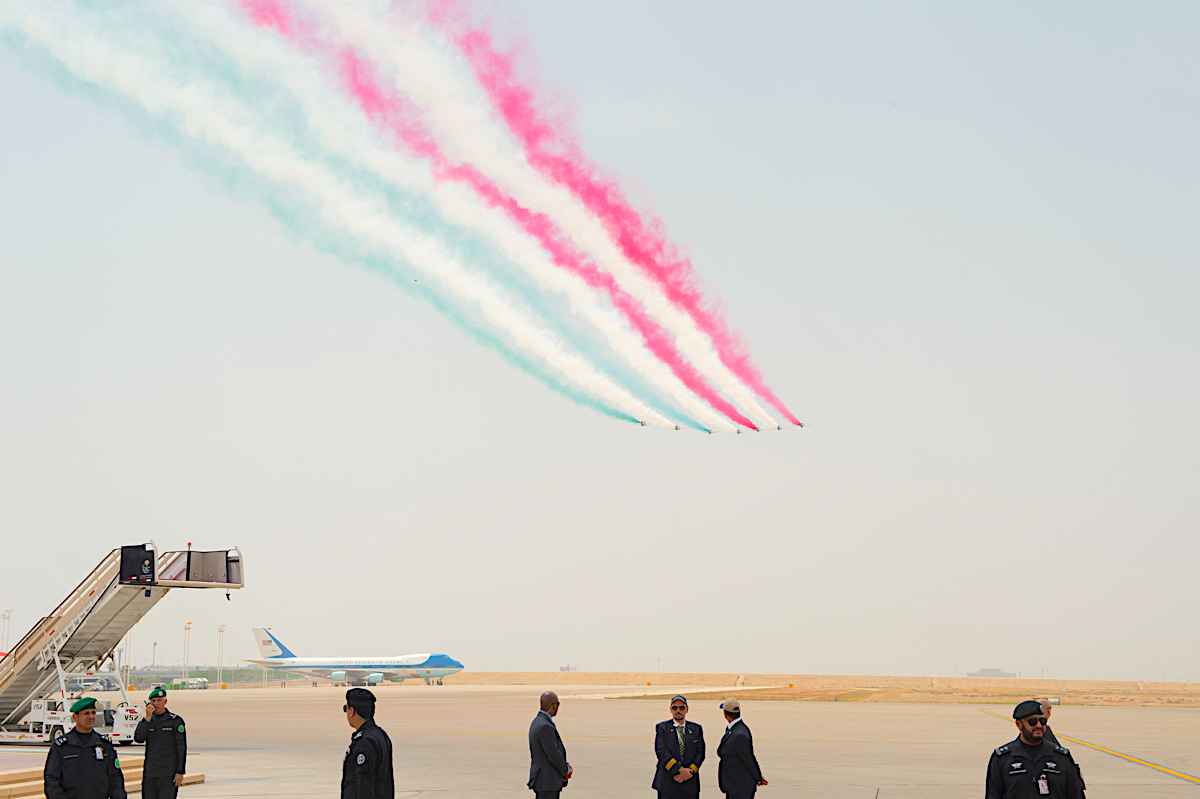 May 20,2017: A flyover of military aircraft during the welcoming ceremony in Riyadh, Saudi Arabia, for President Donald Trump. (White House, Andrea Hanks)

The Pentagon often cites industry’s claim that FMS reduces the cost of military systems to the U.S. Armed Forces. The Pentagon supports FMS because foreign militaries dependent on U.S. equipment, knowhow, training, parts, and software are more likely to listen to the U.S. government on military matters, the direction to take in regional conflicts, and international policy.

For Profit, Against Democracy

From May 2015 through March 2016, U.S. war corporations sold over $30 billion of goods and services to anti-democratic Arab Gulf allies. Given the U.S. war industry’s long sales history to regimes like Bahrain, Saudi Arabia and the UAE, it stands firmly on the side of profit, and firmly against democracy. Or, as Raytheon’s website puts it,

“With more than 50 years in the Middle East, Raytheon’s steadfast commitment and uninterrupted presence in the region is a testament to the tremendous value we place on being there for our customers.” 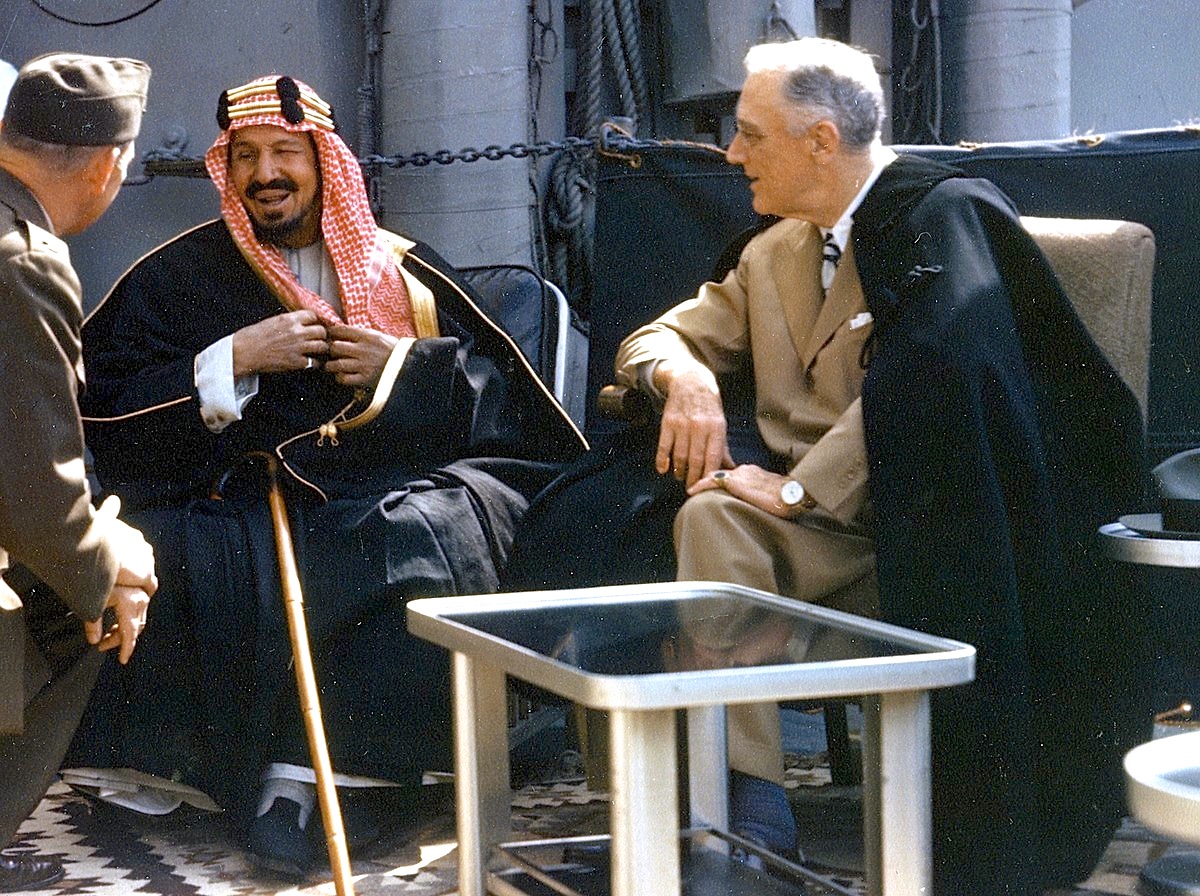 FDR: Making a deal with Saudis that still governs the nations’ relations.

The 1945 Quincy Pact between U.S. President Franklin D. Roosevelt and King Abdul Aziz al-Saud started it all: Washington would entrench bases in and around the Persian Gulf and protect the House of Saud, while the latter would keep the oil flowing and give preferential treatment to U.S. corporate interests.

The Saudi regime would later agree to use the dollar in international oil trading. Saudi Arabia purchases a lot of goods and services from U.S. industry, including the war industry. The Washington regime assented when in 2015 the Saudi and Emirati regimes turned U.S. weaponry on Yemen.

The U.S. war industry, in addition to U.S. military and intelligence assistance, has been the cornerstone of the UAE/Saudi destruction of Yemen. Yemenis now suffer from raging famine, disease outbreaks, and crippled infrastructure. The UAE-Saudi coalition has hit civilians (school field trips, funeral processions, weddings, markets) and prevented humanitarian aid from entering Yemen. 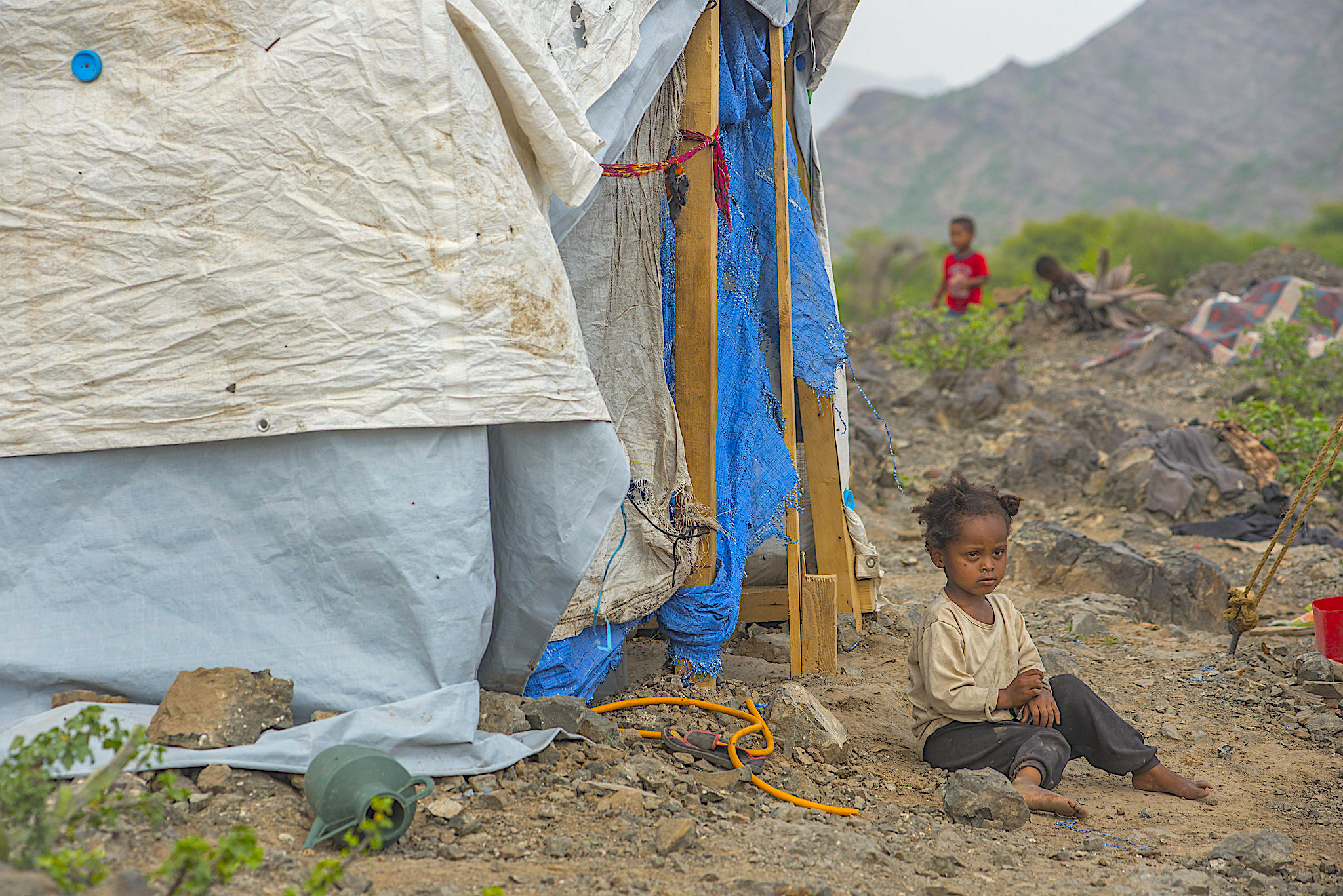 In autumn 2018, the head of the U.S. State Department’s legislative affairs team (a former Raytheon lobbyist) certified that Saudi Arabia and the UAE were taking steps to reduce civilian deaths in Yemen. Roughly 233,000 people have died in Yemen as a result of the war, according to the United Nations humanitarian office. Such destruction is evidence of the military-industrial-congressional triangle functioning as designed.

In early February 2021, the Biden administration announced it would halt support for Saudi-UAE “offensive” operations in Yemen. This claim is full of loopholes and is unlikely to substantially alter or end the myriad of ways the U.S. ruling class aids and abets anti-democratic Arab regimes.

Zionism is the ideology that justifies the colonization of Palestine and the maintenance and expansion of that colonization using brutal violence and espionage. Zionists declared independence when they set up a new state, Israel, in Palestine in May 1948, ethnically cleansing hundreds of thousands of Arabs from the land.

Each year, Washington gives roughly $3.8 billion to Israel, which then is supposed to use such monies to purchase from the U.S. war industry. The occupation of Palestine and Zionist aggression against neighboring countries provide the U.S. war industry with a valuable slice of its portfolio: an outsourced proving ground to test, evaluate, use, and improve weaponry.

When war is profit, death ensures a healthy bottom line.

The Advantages of Zionism 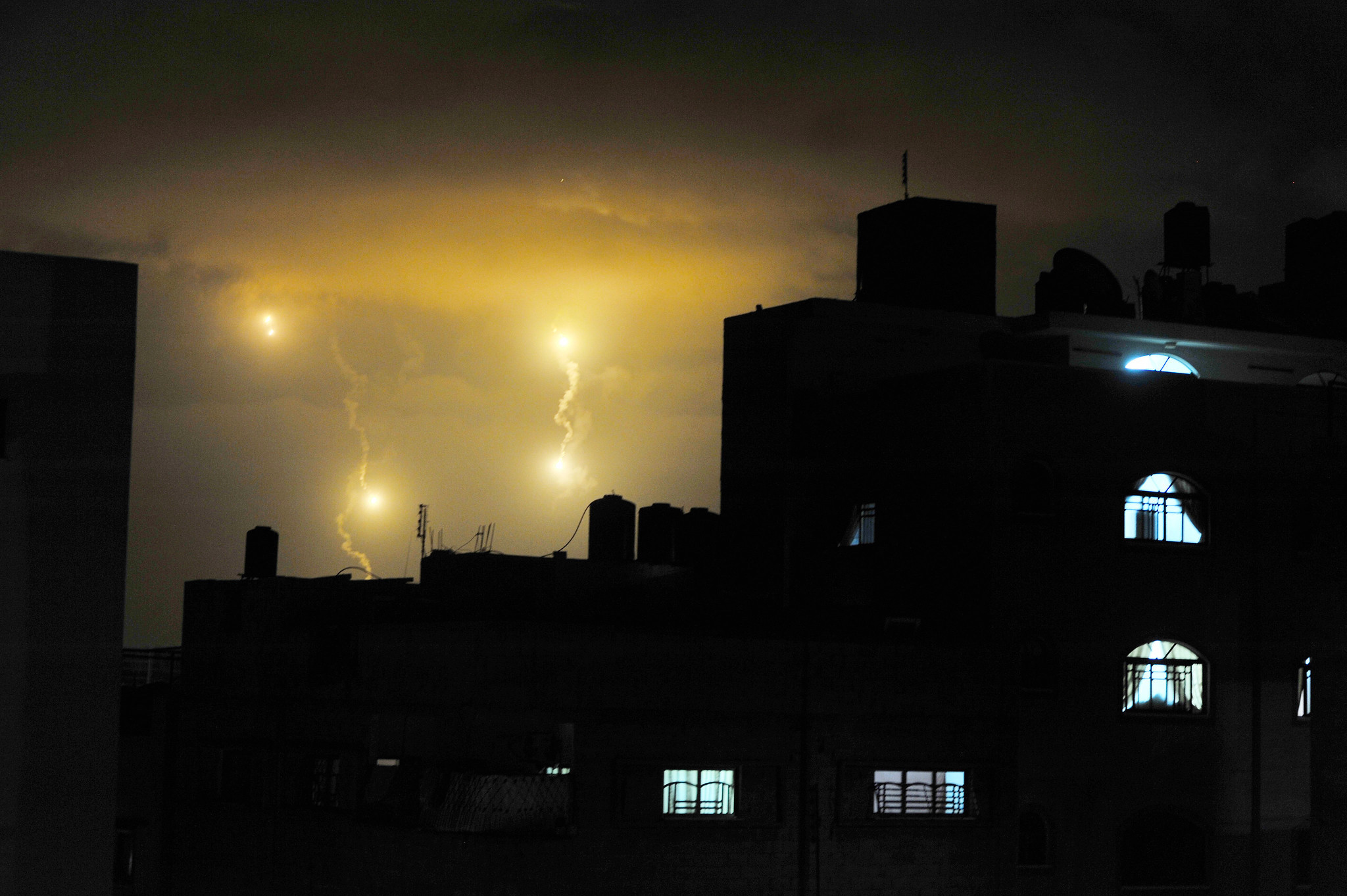 The aggressive military posture inherent to Zionism is a commercial advantage from an industry perspective. Israel has killed Arabs quite effectively with a variety of aircraft and weaponry purchased from U.S. corporations. The U.S. State Department turns a blind eye, as it is once again doing in the current Israeli operation.  Of course, Israel claims self-defense when using U.S. and Israeli weaponry to kill Arabs.

The U.S. and Israeli war industries collaborate, including through research & development and joint ventures. In April 2019, the U.S. war industry pressure group NDIA signed an agreement with the Manufacturers Association of Israel, bringing the latter into the former’s International Division. 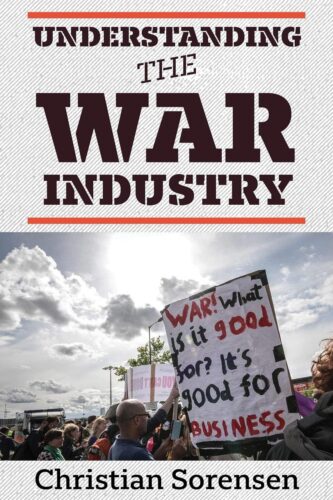 Pretexts keep the military budget elevated, sustain the war industry’s profits, and incite a violent foreign policy. Manufactured fear is essential. After pumping the “War on Terror” for trillions of dollars — and with veterans and the U.S. public growing skeptical of such interventions — the war industry has returned to targeting Russia and China through “great power competition.”

Facing off against Russia and China is more comfortable territory for war corporations. In the calculus of corporate suites, the big-ticket items inherent to competition with another major industrial nation are where the real money can be made. A war on terror was lucrative for a decade or two, and it will continue, but it is not enough to justify excessive spending on cyber, submarines, satellites, hypersonic propulsion, anti-ballistic missiles, nuclear weaponry, artificial intelligence/machine learning, and aircraft carriers.

Competition against Moscow and Beijing also continues the militarization of U.S. society, channeling anger (which might otherwise manifest itself as class awareness and/or physical protest against Washington’s corruption) into outrage against a stereotypical enemy that resides overseas — just as the War on Terror did.

Great power competition is fully entrenched in the Pentagon, as made clear by the 2018 National Defense Strategy, developed in 2017 by military and corporate personnel. It emphasized, “inter-state strategic competition, not terrorism, is now the primary concern in U.S. national security.”

Etching the National Defense Strategy into stone, the then chairman of the Joint Chiefs of Staff, General Joseph Dunford declared in November 2018, that great power competition was here to stay, demanding a shift in Pentagon funding priorities and weapons development. Dunford was speaking at the Halifax International Security Forum, sponsored by corporations (e.g. Boeing, CAE, United Technologies) and NATO, among other powerful groups, including energy and IT firms. 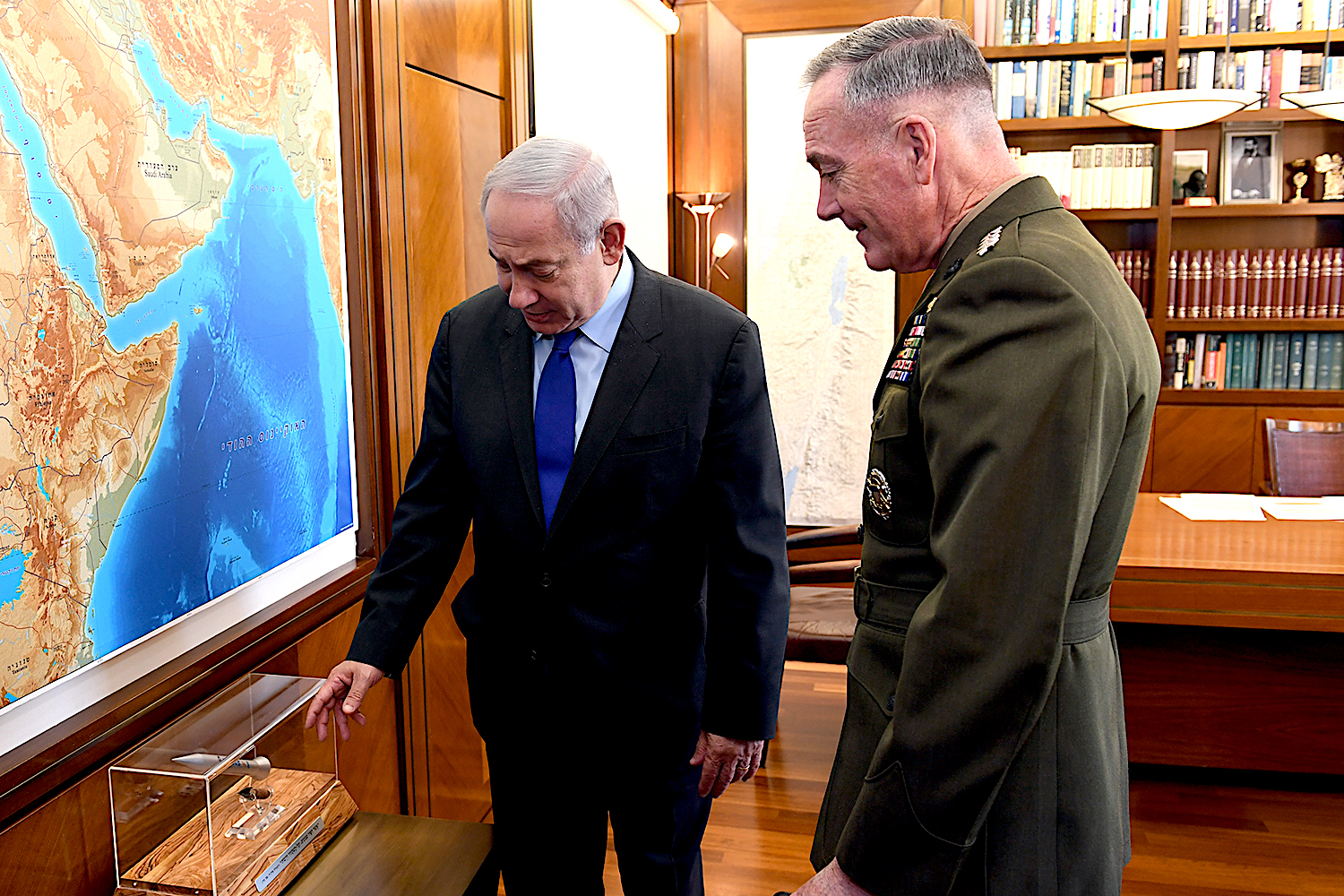 Chairman of the Joint Chiefs of Staff, General Joseph Dunford, at right, meets with Israeli Prime Minister Benjamin Netanyahu in his office in Jerusalem, May 2017. (U.S. Embassy Tel Aviv)

Great power competition has enabled a high volume of war industry goods and services and U.S. military personnel to deploy to Germany, the Czech Republic, Poland and eastern Europe, particularly in the Baltic States and Romania, as well as other clients surrounding China, particularly South Korea, Japan, Taiwan and Guam. Large engineering and project management firms build and sustain the associated infrastructure.

They ignored the real threat: The U.S. Armed Forces’ rampant carbon-based military activity contributes to anthropogenic climate change, which melts Arctic ice, which opens up northern sea lanes, into which the Pentagon projects its polluting arsenal, which puts more carbon in the atmosphere.

The pretext known as great power competition is off to an impressive start, financially, bureaucratically, and industrially. It is incumbent upon the workers of the world to stop it.

This is the final installment in the author’s five-part series.

7 comments for “A People’s Guide to the War Industry -5: Portfolio of Conflicts”