“We stay up all night looking for water to fill plastic buckets,” said one mother in northern Gaza. 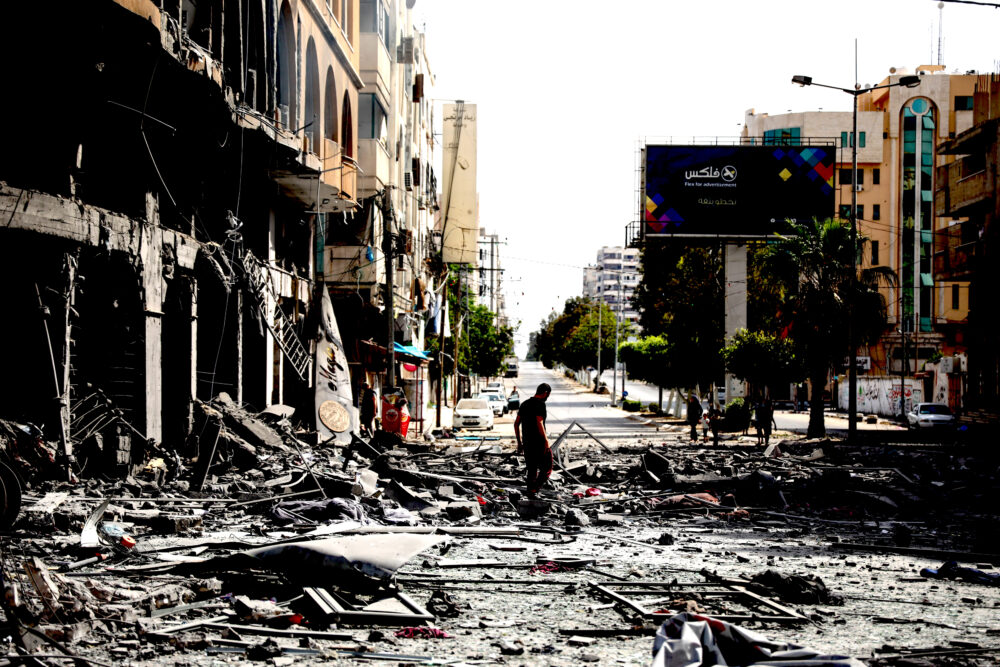 In the ruins of Al Jawhara Tower at the center of Gaza City after it was bombed the previous night, May 12. (M. Hajjar/NRC)

Israel’s deadly 11-day assault on the Gaza Strip left an estimated 400,000 of the occupied territory’s roughly two million people without access to a regular supply of clean water, a humanitarian nightmare that is driving calls for immediate international aid and an end to the 14-year Israeli blockade.

“Attacks on water and sanitation infrastructure are attacks on children.”
—Manuel Fontaine, UNICEF

The result, as Oxfam International’s Shane Stevenson put it Tuesday, is that “hundreds of thousands of people in Gaza will soon have no access to basic hygiene.” According to Oxfam, nearly a fifth of Gaza’s population lacks access to safe water.

“Electricity cuts and the destruction of office buildings have forced many small businesses to come to a halt,” Stevenson said. “Israel’s authorities have stopped the bombing but are now restricting fuel deliveries [upon which Gaza is dependent for its electricity]. They have also closed most of the Gaza fishing zone, meaning nearly 3,600 fishermen have now lost their daily income and food.”

To both rebuild in the wake of Israel’s latest onslaught and confront “the root causes of the conflict,” Stevenson argued that the international community “must ensure concrete political action to bring an end to the occupation and the ongoing blockade,” which has severely limited Gaza’s ability to obtain the materials necessary to develop robust clean water infrastructure.

A temporary cease-fire paused Israel’s bombing campaign last week, but not before the attacks did severe damage to Gaza’s core civilian services. While lack of access to clean water has long been a crisis in the besieged territory, Israel’s fresh wave of airstrikes worsened the emergency by damaging critical pipes and sending untreated sewage water into densely populated areas, heightening contamination risks.

“Even before the recent hostilities,” Oxfam pointed out, “the average daily consumption of water was just 88?liters per capita—far below the global optimal requirement of 100?liters.”

Amal, a mother in northern Gaza, told Oxfam that running water “might be available for one hour, but we won’t have electricity to pump the water to the roof tank.”

“We stay up all night looking for water to fill plastic buckets,” said Amal.

400K people in #Gaza do not have access to regular water supply after 11 days of bombardment devastated electricity and water services and severely impacted the three main desalination plants in Gaza city https://t.co/B8F95pVhOZ pic.twitter.com/RXD27XSQHR

According to a UNICEF report released Tuesday, nearly 48 million people across the Middle East, Africa, Asia, and Europe are in need of clean water and sanitation services, including 1.6 million in the occupied Palestinian territories. The child-focused aid agency stressed that people in those regions are frequent victims of deliberate, war-related attacks on water infrastructure.

“Water resources and the systems required to deliver drinking water have been attacked for centuries,” the new report notes. “All too often, the human dependence on water has been exploited during conflict. Nearly all of the conflict-related emergencies where UNICEF has responded in recent years have involved some form of attack hindering access to water, whether directed against water infrastructure or through incidental harm or tactic used by a party to the conflict.”

Manuel Fontaine, UNICEF’s director of emergency programs, said in a statement that access to clean water “is a means of survival that must never be used as a tactic of war.”

“Attacks on water and sanitation infrastructure are attacks on children,” Fontaine added. “When the flow of water stops, diseases like cholera and diarrhea can spread like wildfire, often with fatal consequences. Hospitals cannot function, and rates of malnutrition and wasting increase. Children and families are often forced out in search of water, exposing them, particularly girls, to an increased risk of harm and violence.”

← COVID-19: Lack of Transparency Risks Global Response
THE ANGRY ARAB: The Palestinian Cause After the War on Gaza →