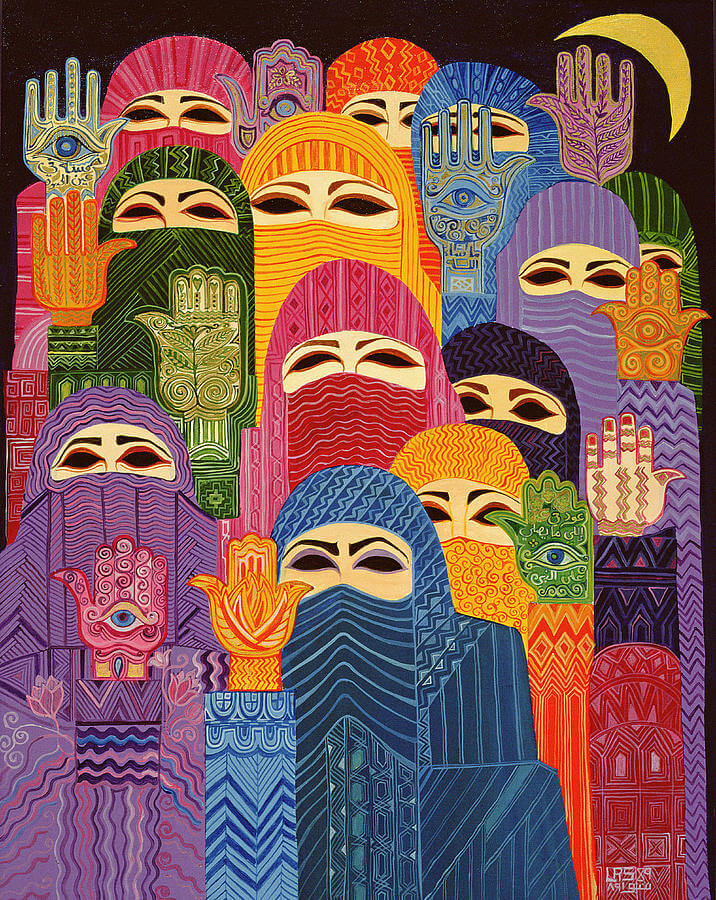 Israel’s massive war machine attacks the Occupied Palestinian Territory (OPT) with total disregard for international law. Since the OPT is an occupied territory, the United Nations does not permit the occupier — Israel — from altering the character of the land under occupation. However, this has not impeded Israel, whose attempt to evict families in Jerusalem’s Sheikh Jarrah neighborhood resulted in the entry of Israeli border troops inside the al-Aqsa mosque, followed by waves of aerial bombardment that has resulted in daily death and injury toll that will be known only when the dust settles.

Importantly, the Palestinians did not surrender to this violation of international law. They fought back in Jerusalem and across the West Bank, in Gaza and the lands surrounding Israel. Thousands of people marched to the Jordan-Palestine border and the Lebanon-Palestine border, disregarding Israel’s threat to fire at them. From Gaza, different factions fired rockets to pressure Israel to desist from its violence in Jerusalem. The rockets from Gaza followed the violent and illegal provocations by Israel in the OPT; these rockets were not the first mover in the events of May 2021.

The bombings of 2021 have been particularly harsh, the targets including buildings that house the press and refugee camps. In Shateh (Gaza), a bombing raid on May 15 left scores of people dead. The Abu Hatab family lost 10 members, eight of them children. Grotesque violence of this kind defines the Israeli apartheid project to annihilate the Palestinians; Rogers Waters calls this violence “primal disdain.” 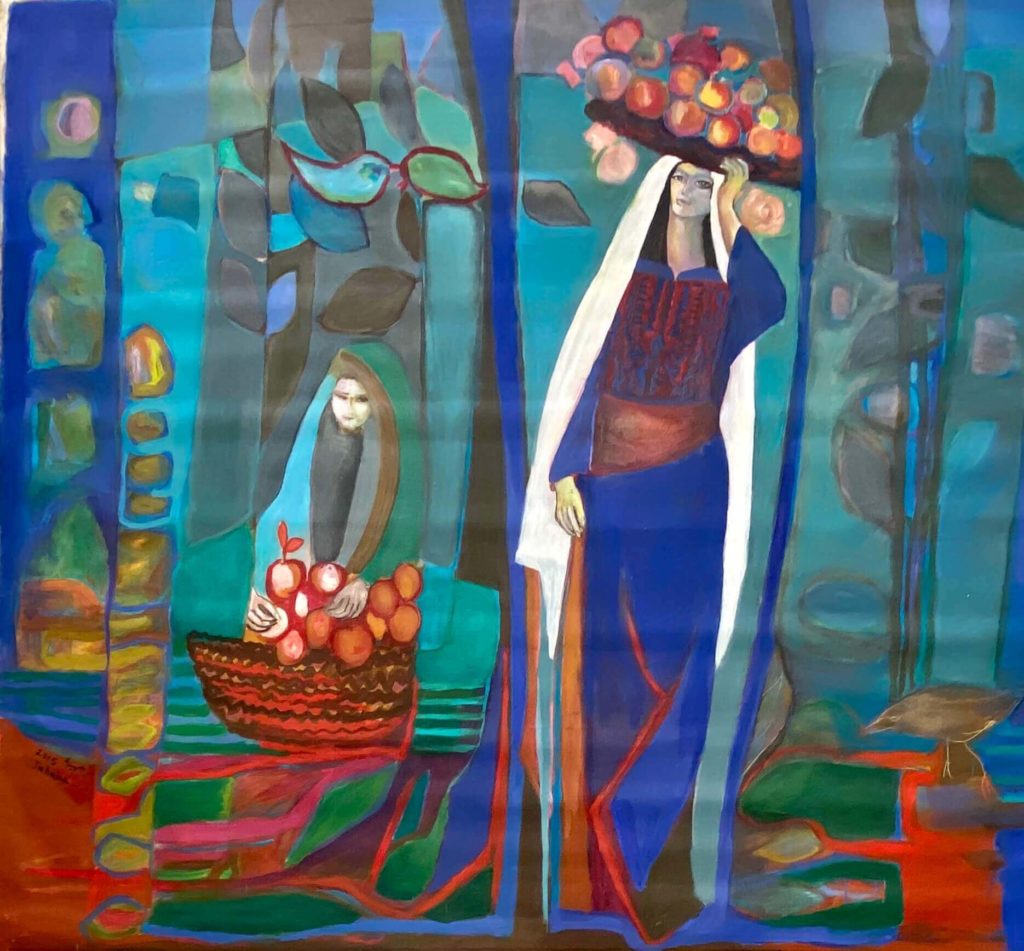 Given the clear violations of international law and the asymmetrical violence of the Israeli bombings, it was widely expected that the UN Security Council would call for a ceasefire. But the U.S. government of President Joe Biden informed the other members of the council that it would not vote for any resolution of that kind. The U.S. alone blocked the release of a council statement on the worsening situation last week. The U.S. also initially opposed holding an open session on Friday — as proposed by Norway, Tunisia and China — which was eventually held on Sunday. For these reasons, Israeli Prime Minister Benjamin Netanyahu thanked the United States and 24 other countries for standing with Israel.

Amongst these countries is Brazil, whose president, Jair Bolsonaro, backed Israel’s right to use terrible force against the Palestinians. This statement from Bolsonaro came just a few days after the police operation against the people of Jacarezinho in Rio de Janeiro, which resulted in the massacre of 25 people. The gap between Jacarezinho and Gaza is only one of scale, the brutality equivalent.

On May 15, Tricontinental: Institute for Social Research and No Cold War held a seminar, “China, USA, and Brazil’s quest for an independent foreign policy.” Former President Dilma Rousseff spoke about how, during her presidency (2011-2016) — and during the administration of her predecessor Lula da Silva (2003-2011) — the Workers’ Party led a process to establish institutions of multipolarity such as the expanded G-20 (2008) and the BRICS [Brazil, Russia, India, China and South Africa] project (2009).

These are not perfect systems, certainly, but they were intended to produce platforms that were not fully subordinated to the United States. Neither have been able to live up to their potential. “Asymmetrical relationships,” she said, “are not equal to multipolarity.” The G-20 continues to take its lead from the Western powers and BRICS has been weakened by the rightward shift in Brazil and India. “The B and the I of BRICS suffered problems,” she said. “The B because of Bolsonaro.” Regarding the strategic necessity of returning to the project of multipolarity for economic recovery, Rousseff explained, “Our recovery would have to be necessarily political.” 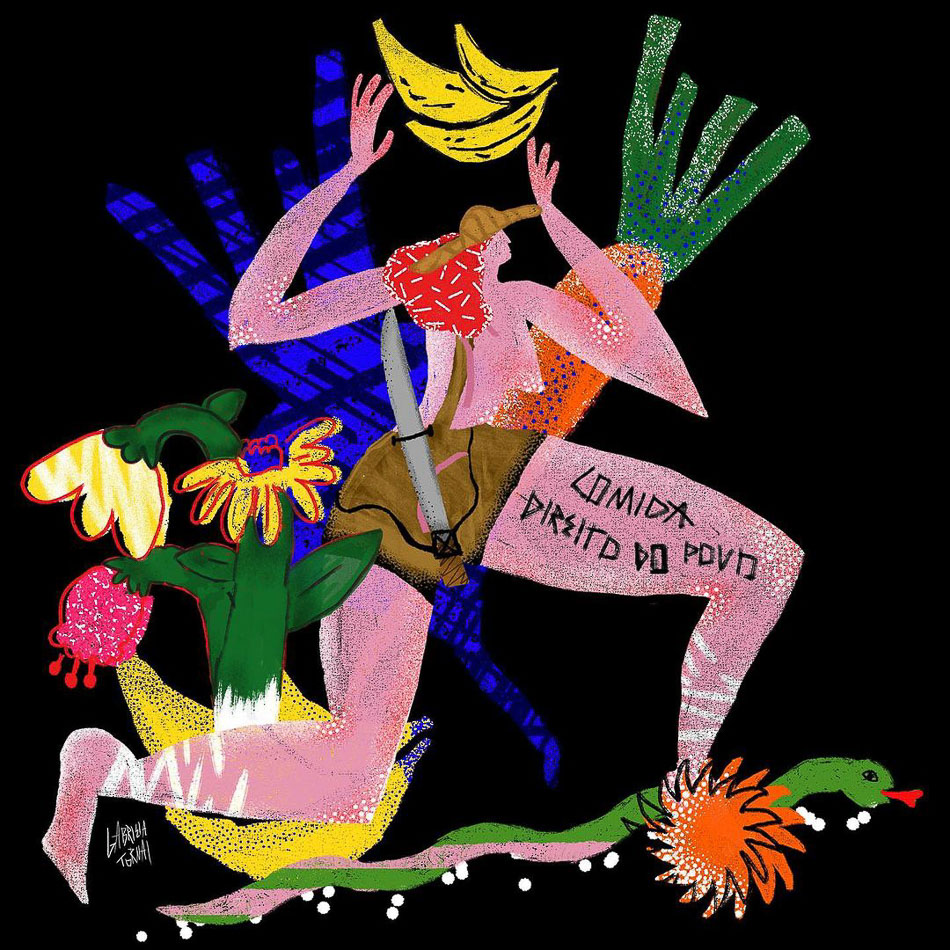 Brazil, being the largest economy in Latin America, would need to play a key role in the construction of multipolar institutions and in opening up the possibility for international law to set aside the imperial vicissitudes of the United States and its allies. For Brazil to play this role, the political bloc that stands against Bolsonaro and the right has to strengthen, and it has to be converted into a winning electoral coalition for the presidential election in 2022. Only if the left returns to power in Palácio do Planalto can Brazil once more play a role in building a multipolar world order.

Our May dossier, “The Challenges Facing Brazil’s Left,” from Tricontinental: Institute for Social Research (Brazil) delves deeply into just this subject. To better understand the problems and possibilities for the Brazilian left, the team in São Paulo interviewed five leaders amongst the range of Brazil’s left: Gleisi Hoffmann, a chair of the Workers’ Party; Kelli Mafort of the national board of the Landless Workers’ Movement or the MST; Élida Elena, vice president of the National Union of Students and a member of the Popular Youth Uprising (Levante Popular da Juventude); Jandyra Uehara of the National Executive Board of the Unified Workers’ Central; Juliano Medeiros, national chair of the Socialism and Freedom Party (PSOL); and Valério Arcary, a member of PSOL’s national board.

Through conversations with these leaders, the dossier traces the path followed by the Brazilian left, examining the instruments used to foster unity of the organized sections of the left and of the people behind these sections. It also explores the debate over whether to build a wider anti-Bolsonaro broad front or a narrower left front, as well as the impact of Lula’s recent pardoning from false corruption charges and his newly renewed eligibility to run for office in the next presidential election. 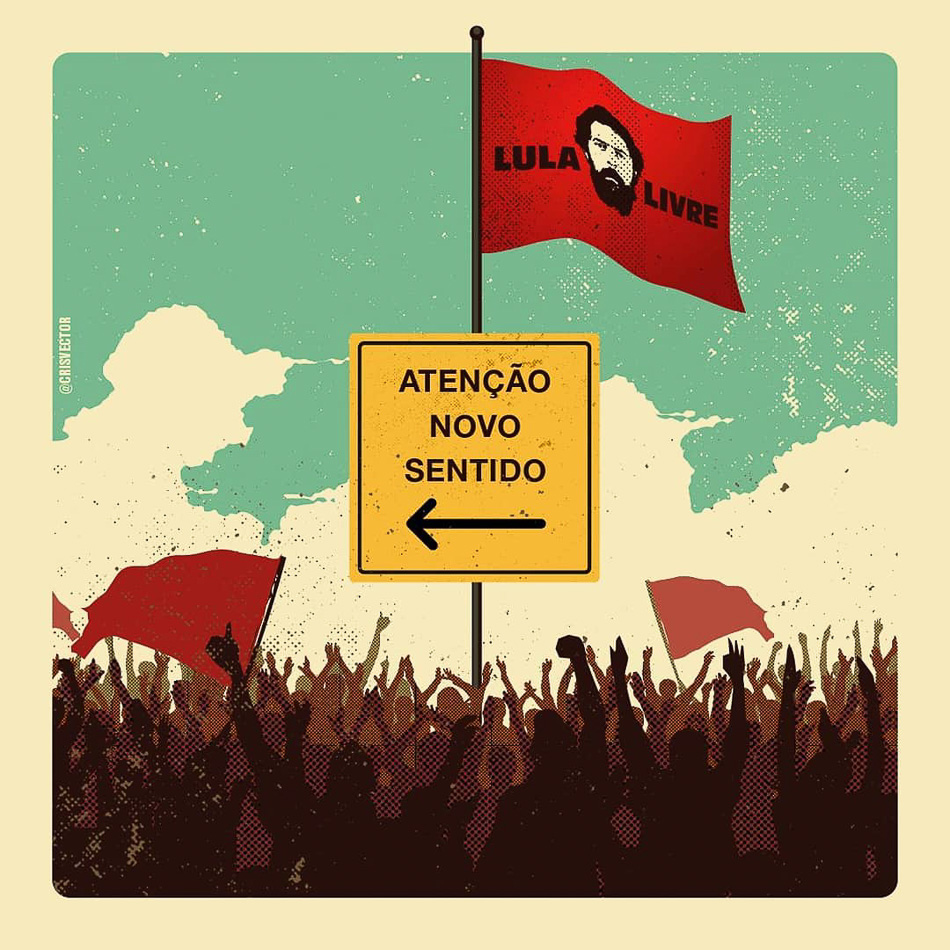 Polls released recently show Lula ahead of Bolsonaro in the first round by 41 percent to 23 percent; in every second round scenario, Lula defeats his opponents (55 percent to Bolsonaro’s 32 percent, for instance).

MST leader Kelli Mafort says “The Lula factor exercises tremendous influence over the Brazilian left. The urgency of the current situation calls for him to continue to be a leader in solving Brazil’s problems, but it also helps urge activists to carry out base building work, expand solidarity actions, and confront the fascist Bolsonarism [that permeates] the working class.”

To root out Bolsonarism would require that Brazil settle accounts with Bolsonaro’s criminal behavior during the pandemic, which has already set in motion a charge of crimes against humanity in the International Criminal Court in The Hague. Evidence of Bolsonaro’s genocidal policies was made clear in June 2020 by Chief Raoni Metuktire of the Kayapó, who said, “President Bolsonaro wants to take advantage of the virus; he is saying that the Indian has to die.”

Mafort’s point about the need to build the bases of the key classes is echoed by the others interviewed for the dossier. They assert that winning the election is fundamentally important but that, in order to secure not only the presidency but a new project for Brazil, building the strength of the working class and the peasantry is essential. The contours of this new project will contain a program for the post-pandemic scenario for Brazil and the importance of an independent, internationalist foreign policy for Brazil. 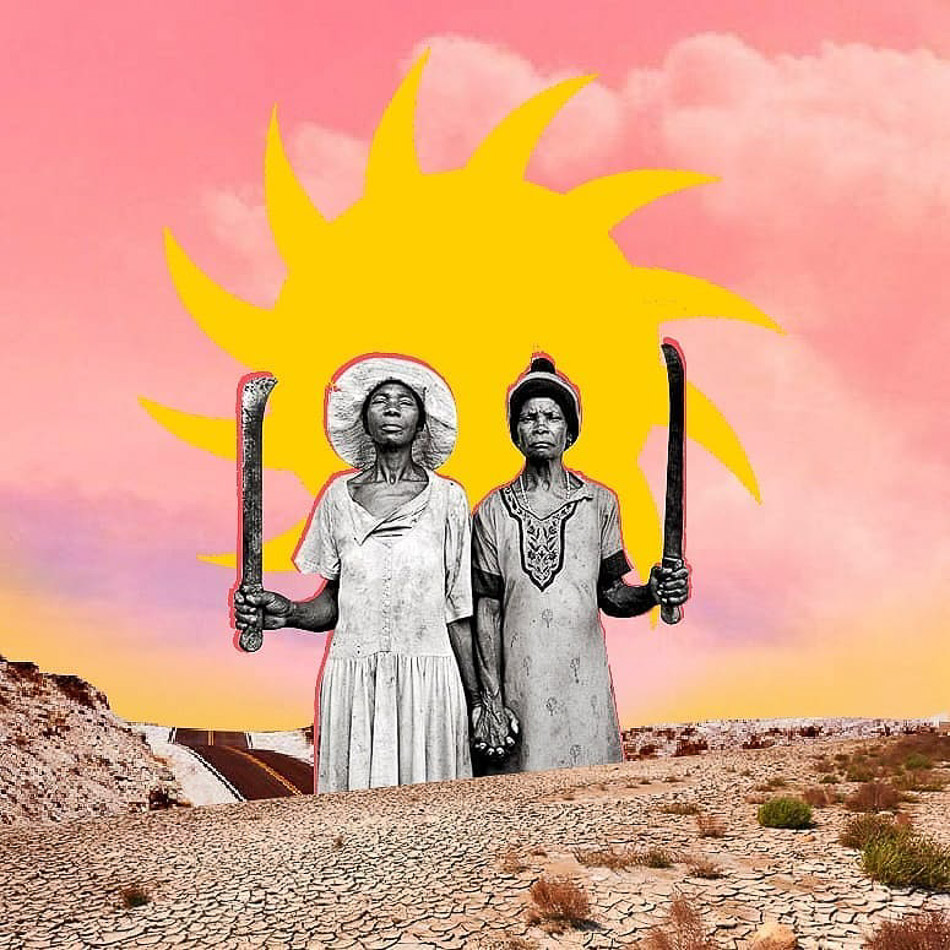 Since last year, the United States has used its position of political preeminence to get several Arab monarchies (Morocco and the United Arab Emirates) to recognize Israel, which means to set aside the legitimate aspirations of the Palestinians.

This process of undermining Palestinian rights will continue if the U.S. is left unchallenged on the world stage. Genuine multipolarity would prevent the U.S. from using its force against the Palestinians, the Yemenis, the Sahrawis and others. The defeat of the ruling classes in countries such as Brazil and India — subordinate to U.S. interests — is essential for advancing the interests of the people of the world, from Palestine to Colombia. 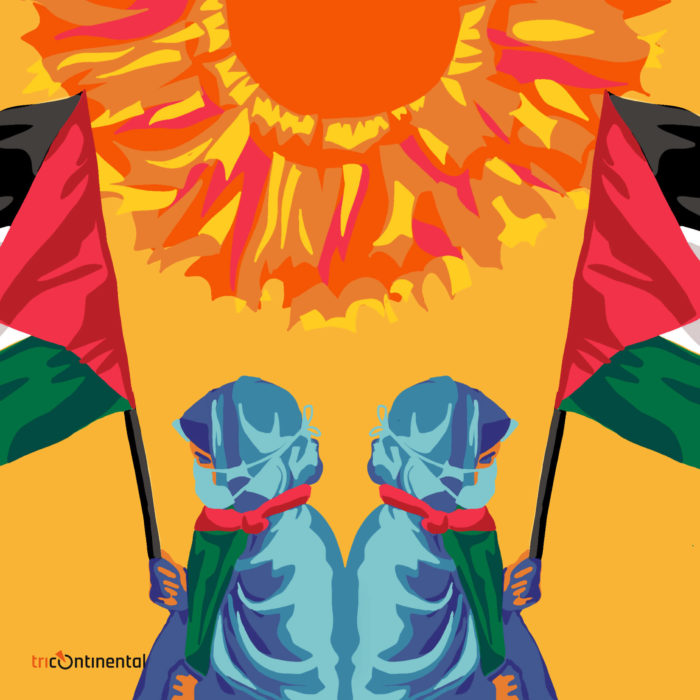 In 2014, the last time Israel bombed Gaza with this level of extreme ferocity, the Iraqi poet Sinan Antoon watched as families fled from their bombed homes for UN schools, which were also bombed. He imagined the danger through a conversation between a child and a grandfather (sidu). They are talking about Jaffa (now inside Israel) and wondering about the Palestinian’s right to return, guaranteed by UN Security Council resolution 194 (1948).

Are we going back to Jaffa, sidu?
We can’t
Why?
We are dead
So are we in heaven, sidu?
We are in Palestine, habibi
and Palestine is heaven
and hell.
What will we do now?
We will wait
Wait for what?
For the others
….
to return

5 comments for “Sleep Now in the Fire”