The U.S. hypocrisy to come will be even greater than anything tried by the Trump administration.

For a time after Joe Biden took office not quite three months ago, among the questions raised was how the new administration would address the Syria question.

I do not think we will have to wonder about this much longer. It is early days yet, but one now detects the Biden’s administration’s Syria policy in faint outline. From what one can make out, it is bleak, it is vicious, it is unconscionably cruel to the Syrian people.

And it may prove yet worse than anything the Trump administration came up with, the Bible-banging Mike Pompeo in the lead as secretary of state.

Will Biden’s national security people drop the covert coup operation Barack Obama set it in motion nine years ago, its failure long evident? Or will they reinvigorate American support for savage jihadists in the name of “regime changing” the secular government in Damascus? What about the American troops still operating illegally on Syrian soil? What about the oilfields the Trump administration took to “protecting” from the nation that owns them? What about the brazen theft of crude from those fields?

And what, of course, about the murderous sanctions that various executive orders have escalated on numerous occasions since the Bush II administration imposed the first of them 17 long years ago?

Queues all over Syria for bread and fuel after the US and NATO looted Syria’s oil and burned its wheat.

The US is a sadistic regime that thrives on the misery of nations. Syria was once a self-sufficient country. Before America decided Syria needs “democracy and freedom”. pic.twitter.com/GFJcURInO5

What will Biden and his people do, in short, about the godawful mess the U.S. has made of the Syrian Arab Republic since it bastardized legitimate demonstrations against the Assad government in early 2012 (at the latest) by perverting them with Sunni extremists and hundreds of millions of dollars’ worth of weapons?

These were the questions. Answers now begin to arrive.

The first suggestion of things to come came in late February, when U.S. warplanes bombed sites inside Syria’s border with Iraq said to have been used by militias backed by Iran. This action coincided roughly with talks in Washington with senior Israeli intelligence and military officials, convened to determine whether and how the administration would re-enter the accord governing Iran’s nuclear programs. Those talks merely confirmed what was already evident: The Biden administration will make no move in Iran’s direction without Israel’s approval. Ditto in the Syrian case.

As a long record shows, Israel wants to destabilize Syria as long as it is not governed by a pliant Western client; it continues to bomb Syrian targets, including Damascus, on a regular basis. With these realities in view, we can confidently surmise that the Biden administration does not actually have a Syria policy, just as it does not actually have an Iran policy. Apartheid Israel has a Syria policy it dictates to the professedly Zionist Biden administration.

“When I think of the suffering of the Syrian people, including Syrian children, I think of my own two children,” Antony Blinken tweeted last week. “How could we not take action to help them? Our common humanity demands it. Shame on us if we don’t.”

When I think of the suffering of the Syrian people, including Syrian children, I think of my own two children. How could we not take action to help them? Our common humanity demands it. Shame on us if we don't. pic.twitter.com/IcOECZPUwt

One already grows accustomed to our new secretary of state’s wildly disconnected remarks on social media and elsewhere. This guy has a troubled relationship with reality, we must begin to conclude. As The Grayzone’s Max Blumenthal replied to this morbid hypocrisy, “If you treated your children like you treat the Syrian people you would be jailed for child abuse.”

Would you starve your two children and deprive them of medicine with sanctions, and steal their belongings at gunpoint?

If you treated your children like you treat the Syrian people you would be jailed for child abuse. https://t.co/8AgmBIxTnc

But let us set aside the preposterous assertion that, while starving Syrians of bread, fuel, medicines and reconstruction funding other nations would otherwise provide, Blinken thinks of suffering Syrians as he does his children. As boilerplate propaganda this offensive stuff may seem trivial and worthy of no note. But in this case we are left with a question worth posing.

Why would Blinken broadcast these things on social media at this moment? Why would he summon “our common humanity” when there is no shred of evidence that he or anyone else among Biden’s national security crew gives a tinker’s damn about those human beings commonly known as Syrians?

I have two answers, of equal importance.

One, the Biden administration appears to be preparing Americans for a round of Washington’s morally bankrupt, grossly illegal campaign to bring down the government of a sovereign nation because it does not conform to America’s imperial diktat (and because, as noted, this will please the Israelis). Liberal and “progressive” consciences must be eased. And among others a state of slumber must be maintained.

Two, Blinken has in all likelihood begun the work of keeping Washington’s “coalition partners,” notably the French and British, in the Syrian subversion game by providing cover for the savagery that is to come. Reading straight from the Vietnam-era script, Blinken wants America’s “allies and partners” — a favorite phrase of his — to be confident that when they bomb Syrian children the world will understand it is in order to save them.

Never go to Tony if you are in search of an original thought.

Reading into these matters, text and subtext, we can begin to brace ourselves for what is probably on the way in Syria. The coup operation is again on. American troops will remain on the ground, almost certainly to increase in number over time. The U.S., in concert with the same fanatics it has to date bankrolled, trained and supplied, will continue to sequester Syria’s oilfields and the fertile wheat fields that ought to be feeding the population.

The hypocrisy to come will be yet greater than anything the Trump administration tried on — a forecast I offer confidently. Here comes the bankruptcy of the “responsibility to protect” at its very worst. This will be liberal righteousness with a genteel veneer worthy of your grandmother’s mahogany dining table.

Another piece of the puzzle arrived just before Easter (of all times), when PBS broadcast an interview with Abu Mohammad al–Jolani, the head of Hayat Tahir al–Shalam, HTS, the latest among the name-changing cutthroats our mainstream press still refers to as Syria’s “moderate opposition.” Martin Smith’s exchange with Jolani is a piece of a full-dress documentary on Jolani that Frontline plans to air in the not-distant future. Herein lies a tale.

Alert readers will recall that Jolani was once an Islamic State commander who went on to found Jabhat al–Nusra, the worst of the worst among al–Qaeda’s shape-shifting affiliates operating in Syria. The State Department declared Jolani a “specially designated global terrorist” in 2013. This designation still stands.

Jolani now runs what he calls a “salvation government” in Idlib, the remaining retreat of Islamist extremists in northwestern Syria. Yes, he remains an Islamist theocrat determined to impose Sharia law on secular Syria. But (the big “but”) is that he is committed to fighting Assad and so shares “common interests with the United States and the West,” as PBS delicately puts it. 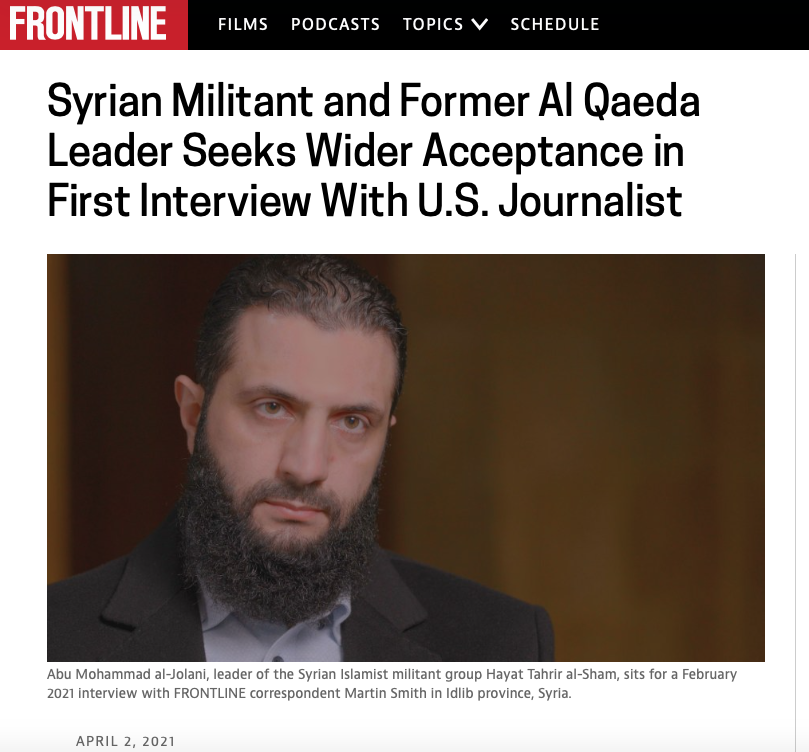 Human rights NGOs have implicated Jolani and HTS — videos, witness testimonies, interviews with victims — in numerous cases of torture, violence, sexual abuse, arbitrary arrests, disappearances and the rest of the inexcusable stuff these groups get up to. Jolani denies it all in his encounter with Smith: “There is no torture, I completely reject this,” he says on camera.

To be fair to Smith and Frontline, they have covered themselves carefully by laying out the record of Jolani’s and HTS’s crimes against innocent Syrians. But Smith also wants us to know of Jolani’s emergence “as a leading Islamist militant” — note the “Islamist” remains — “and his efforts, despite his history with al–Qaeda and allegations of human rights abuses, to position himself as an influential force in Syria’s future.”

As if to certify this judgment, PBS cites the noted remark recently of James Jeffrey, the self-confessed liar who served as President Donald Trump’s special envoy to Syria, to the effect that HTS is “‘an asset’ to America’s strategy in Idlib.”

What are we looking at here? There are two ways to consider this question.

One, PBS’s generous reporting on Jolani’s past is at bottom part of a rehabilitation job. It is once again a case of text and subtext. Read the PBS report accompanying the video of Smith’s interview. The list of HTS’s sins is a lengthy apologia, the intent of which appears to be to preclude the criticisms sure to arise along with Jolani’s emergence as “an influential force in Syria’s future.”

My conclusion: Syria may shortly get its version of Juan Guaidó and Alexey Navlany, the two Dummköpfe Washington has ridiculously elevated to some status of saintly democrats in Venezuela and the Russian Federation respectively. My verb is “may” because the Jolani project could prove so preposterous as to fail  before it gets airborne.

Two, we watch the redeployment of a tried-and-disastrous strategy Zbigniew Brzezinski sold to President Jimmy Carter in late 1979. Paranoiacally anti–Soviet, Carter’s national security adviser persuaded the peanut farmer from Plains the best way to snooker the Soviets in Afghanistan was to finance and arm its adversaries. Osama bin Laden, al–Qaeda — indeed, the fundamentalist freak show that has unfolded in Syria for nearly a decade: Need one say more about the consequences of Zbig’s idiocy?

One would think the policy cliques in Washington would learn something once in a while, but no. They cannot learn because they cannot quite get to thinking.

This column concerns early signs of another foreign policy disaster that may be impending. Should these signs prove out, we will watch as an empire already on its back foot makes another desperate attempt to defend its fading hegemony. Let us, once again, bitterly hope for failure.

America could knock over whoever it wished long ago, and it could send men to the moon. No longer does it seem able to do either.