The problem, says Caitlin Johnstone, is a few manipulative sociopaths who are willing to do anything to get ahead and into positions of power. 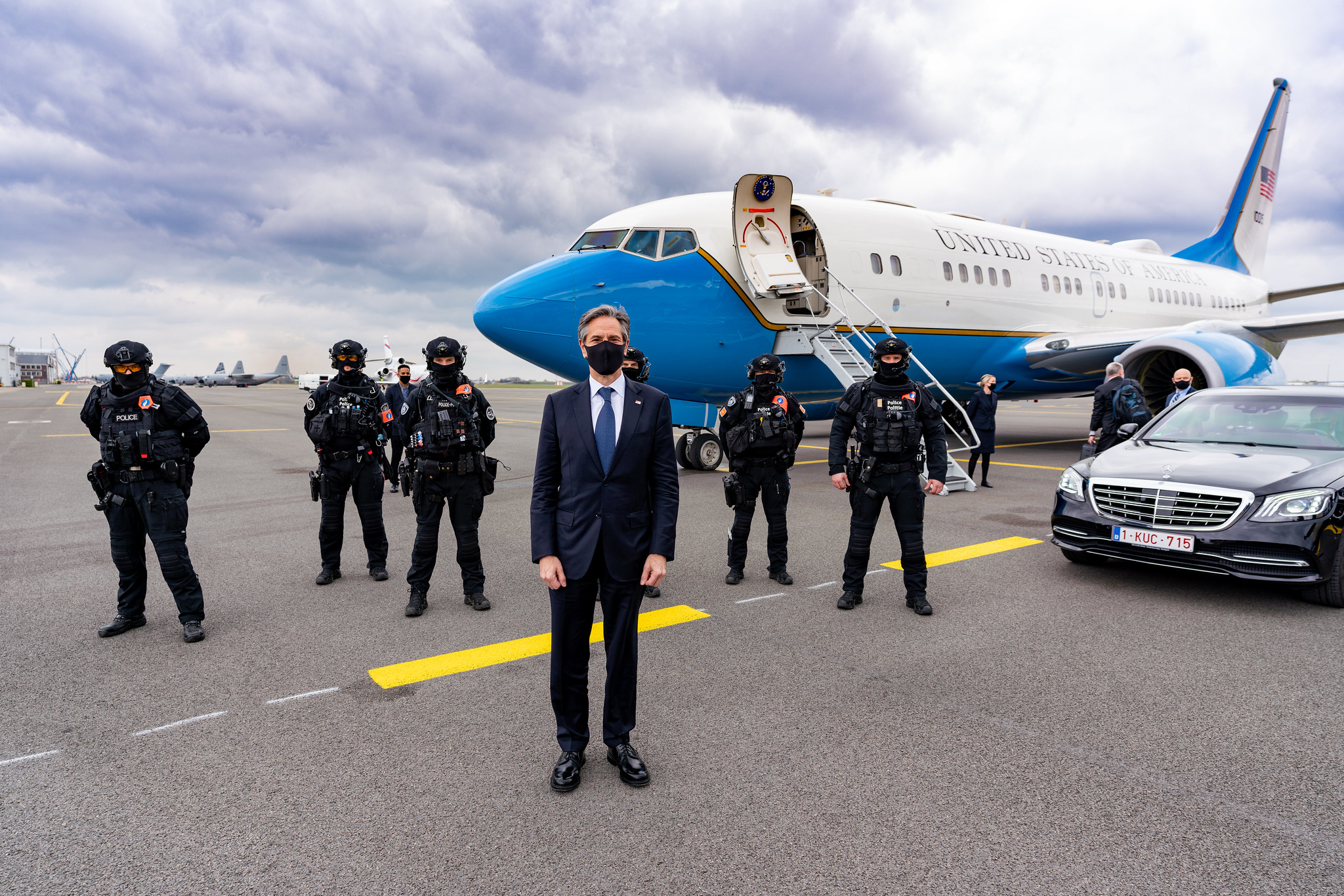 U.S. Secretary of State Antony Blinken with the local police tactical team before departing a NATO meeting in Brussels where he called for an expansion of the military alliance into Asia. (State Department, Ron Przysucha)

One section describes a short dialogue between the Principia‘s author “Malaclypse the Younger” (Mal-2) and “the Goddess”, who speaks to him through a radio:

One day Mal-2 asked the messenger spirit Saint Gulik to approach the Goddess and request Her presence for some desperate advice. Shortly afterwards the radio came on by itself, and an ethereal female Voice said YES?

“O! Eris! Blessed Mother of Man! Queen of Chaos! Daughter of Discord! Concubine of Confusion! O! Exquisite Lady, I beseech You to lift a heavy burden from my heart!”

WHAT BOTHERS YOU, MAL? YOU DON’T SOUND WELL.

“I am filled with fear and tormented with terrible visions of pain. Everywhere people are hurting one another, the planet is rampant with injustices, whole societies plunder groups of their own people, mothers imprison sons, children perish while brothers war. O, woe.”

WHAT IS THE MATTER WITH THAT, IF IT IS WHAT YOU WANT TO DO?

“But nobody Wants it! Everybody hates it.”

At which moment She turned herself into an aspirin commercial and left The Polyfather stranded alone with his species.

Because doesn’t it kind of feel like that’s the message we’ve been getting? From the divine if you like, or from the universe, or just from the mundane reality of our situation? Humanity’s leading problems at this point in history are not due to sabre-toothed tigers or deadly plagues whose nature we don’t understand, but are instead generated by humanity itself. War, tyranny, exploitation, ecocide — these are human-generated problems.

So it kind of feels like the message we’re getting here is, “WELL, THEN STOP.” If we don’t like how things are, we should knock it off. Stop waging wars. Stop exploiting and impoverishing each other. Stop killing the ecosystem. Don’t do those nutty things.

And of course the joke is that while this is true, it’s much easier said than done. It’s one thing for some lofty deity to tell us “WELL, THEN STOP” from on high, and quite another for us to actually do it.

But for those who care about our world, it’s still a question that needs to be taken seriously. Really, why don’t we stop?

Cuban doctors arriving in Italy to help during the pandemic. (Twitter )@JoseCarlosRguez)

One answer you’ll run into a lot is that this is just human nature. That it’s human nature to be selfish, competitive, predatory, exploitative, tyrannical, vicious, brutish, and violent. Some people strongly believe this, and get quite defensive if you challenge that belief.

Personally, I never turn my back on such people. Someone who says it’s human nature to be selfish, competitive, predatory, exploitative, tyrannical, vicious, brutish and violent isn’t telling you about human nature, they’re telling you about their own nature. I look within myself and find none of those things, but if you tell me that’s what you find when you look within yourself, I believe you.

The self-destructive behavioral patterns we’re seeing play out in our species are not the result of some unalterable feature inherent in our nature. This is evidenced by the existence of many human beings whose behavior is kind, gentle, generous, and collaborative. Humans are not inherently self-destructive, it’s just a behavior we see exhibited to varying degrees in some humans.

Most adults understand that it’s wrong to judge a racial, ethnic or religious group for the immoral actions of a few of its members, but sometimes it seems like they often fail to extend this same principle to humanity as a whole. The problem is not “human nature,” the problem is that some humans fail to develop functioning empathy centers in their brains, often as a result of early childhood trauma. Those humans then use the competitive edge their lack of empathy gives them in a system which rewards competitiveness and a willingness to do anything to get ahead to ascend to positions of power. That is why we are in the mess we’re in. 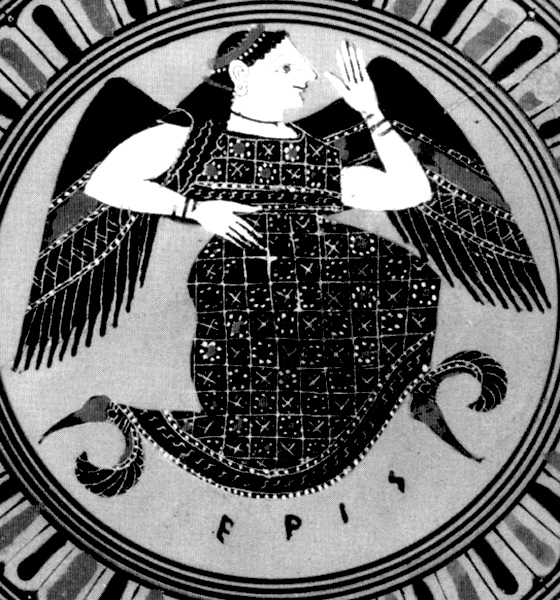 The Principia Discordia, if read literally, encourages the worship of the Greek goddess Eris. (Wikimedia Commons)

This is an important distinction, because it means we’re not up against some intrinsic aspect of our being here. We’re up against a small minority of manipulative sociopaths and psychopaths and a system which rewards a lack of empathy. The maxim that there are more of us than there are of them remains true, and it means that we can indeed use the power of our numbers to force real change. To move our world into health. To stop.

There’s nothing inherently wrong with humanity itself that is making a mess of things. The problem is that we’re swimming in lies that we’ve been indoctrinated into by liars who benefit from our remaining deceived. All our problems can be solved by moving from lies to truth.

All that’s required is for enough people to become sufficiently aware of what’s true for a real revolution against our sociopathy-rewarding systems to become possible. All positive human behavioral changes are always the result of our becoming more aware of the dynamics underlying our negative behaviors, whether you’re talking about addictions, poor anger management, bigotry and prejudice, or unjust political systems. Every single positive development in the way humans behave in the world has been preceded by an increase in awareness, throughout our entire history.

This is how we change things. This is how we stop. We become sufficiently aware in sufficient numbers of the abusive nature of our systems, and of who is doing the abusing, to open up the possibility of a revolutionary movement away from our sociopathy-serving competition-based models to systems in which we collaborate with each other and with our ecosystem for the common good.

There is nothing in us which is preventing this. We’re just not aware enough yet. We have yet to wake up. But just like awakening from sleep, awakening from our propaganda-induced coma can happen suddenly, and lead immediately to a situation that is unrecognizably different from the situation which preceded it.

← NATO Expanding its Theater With China in its Sights
COVID-19: The Vaccine Must Be a Common Good for Humanity →