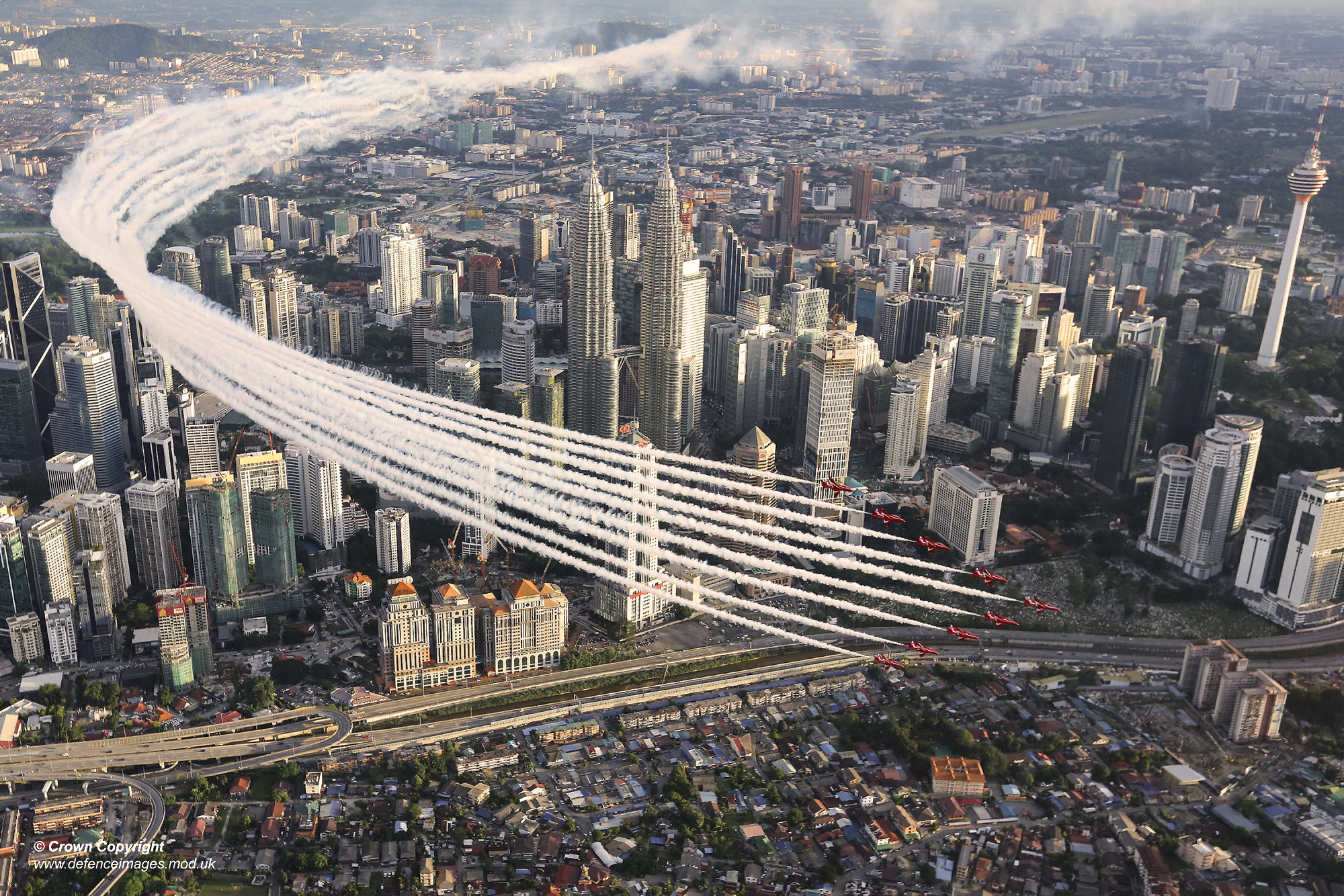 The U.K.’s Royal Air Force aerobatic team, the Red Arrows, performing over Kuala Lumpur during a series of flypasts in the Asia-Pacific and Middle East regions in 2016. (Defence Images, CC BY-NC-SA 2.0)

During the March 23-24 meeting of the North Atlantic Treaty Organization (NATO) council, Anthony Blinken, the U.S. secretary of state, encouraged NATO members to join the U.S. in viewing China as an economic and security threat to the U.S. as well as to NATO countries, thereby expanding NATO’s areas of focus to include the Pacific. This is a dangerous move that must be challenged.

To gain insight into what transpired at the March NATO meeting, we can look to a roadmap for NATO’s future, which was released last fall. The report, entitled “NATO 2030: United for a New Era,” is intended to be a guide for the military alliance in meeting the challenges it will face in the next decade. In the report, released in November, the “independent group” of five advisers from 10 NATO countries identified 13 challenges and threats to NATO in the next decade.

This new proposed roadmap for NATO reflects an alarming expansion: It is as much about China and the Asia/Pacific region as it is about NATO’s traditional traditional area of operations and concern, Europe and Russia.

Although the group identified the No. 1 threat to NATO as Russia, China was named as threat number 2.

The document brings the North Atlantic Treaty Organization into the Pacific and attempts to provide a justification to expand and strengthen “partnerships” in the Asia/Pacific region. NATO already has four “partners” in the Pacific through bilateral agreements with Japan, South Korea, Australia and New Zealand.

As NATO partners, Australia and New Zealand have deployed many troops under the NATO banner in Afghanistan, while Japan and South Korea have had reconstruction and development projects in Afghanistan. Meanwhile, the United States, NATO’s mega-member, has military bases all over the Pacific, including in Japan, Okinawa, South Korea, Guam, Singapore and Hawaii that are used by NATO “partners” during regional war drills.

U.S. Secretary of State Blinken, in his address on March 24 to NATO members, strongly rebuked China and urged NATO allies to join with the U.S. in this adversarial position. 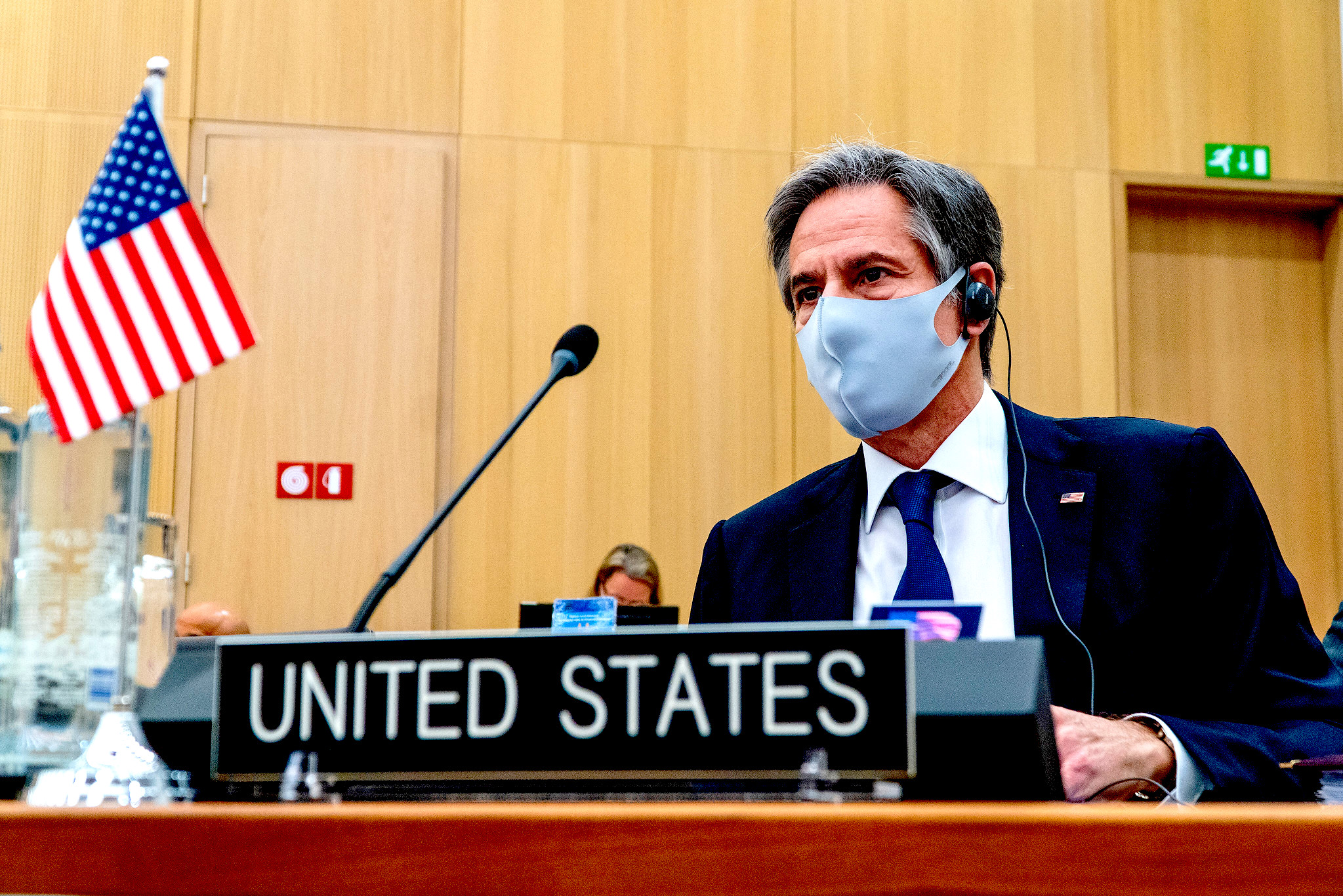 Blinken said the U.S. wouldn’t force its European allies into an “us-or-them choice,” but he then implied the opposite, emphasizing that Washington views China as an economic and security threat, particularly in technology, to NATO allies in Europe.

“When one of us is coerced we should respond as allies and work together to reduce our vulnerability by insuring our economies are more integrated with each other,” Blinken said.

In his March 24 press conference after the meetings of the North Atlantic Council and after U.S. Secretary of State Blinken’s statement, NATO Secretary General Jens Stoltenberg focused on primarily on Russia but echoed Blinken’s oppositional rhetoric regarding China.

While saying “We don’t regard China as an adversary,” Stoltenberg nevertheless continued to spell out specific reasons NATO agrees with the U.S.: “The rise of China has direct consequences to our security…. So, one of the challenges we face as we now have this forward looking process with NATO 2030 is how to strengthen and how to work more closely together as allies, responding to the rise of China.”

NATO’s concerns about Chinese military expansion include the construction of nine naval bases on atolls in the South China Sea and an increasing number of ships: China now has the largest navy in the world, with 350 ships and submarines, including over 130 ships. In comparison, the U.S. Navy has 293 ships as of early 2020, but U.S. naval ships have substantially more firepower than Chinese Navy ships. 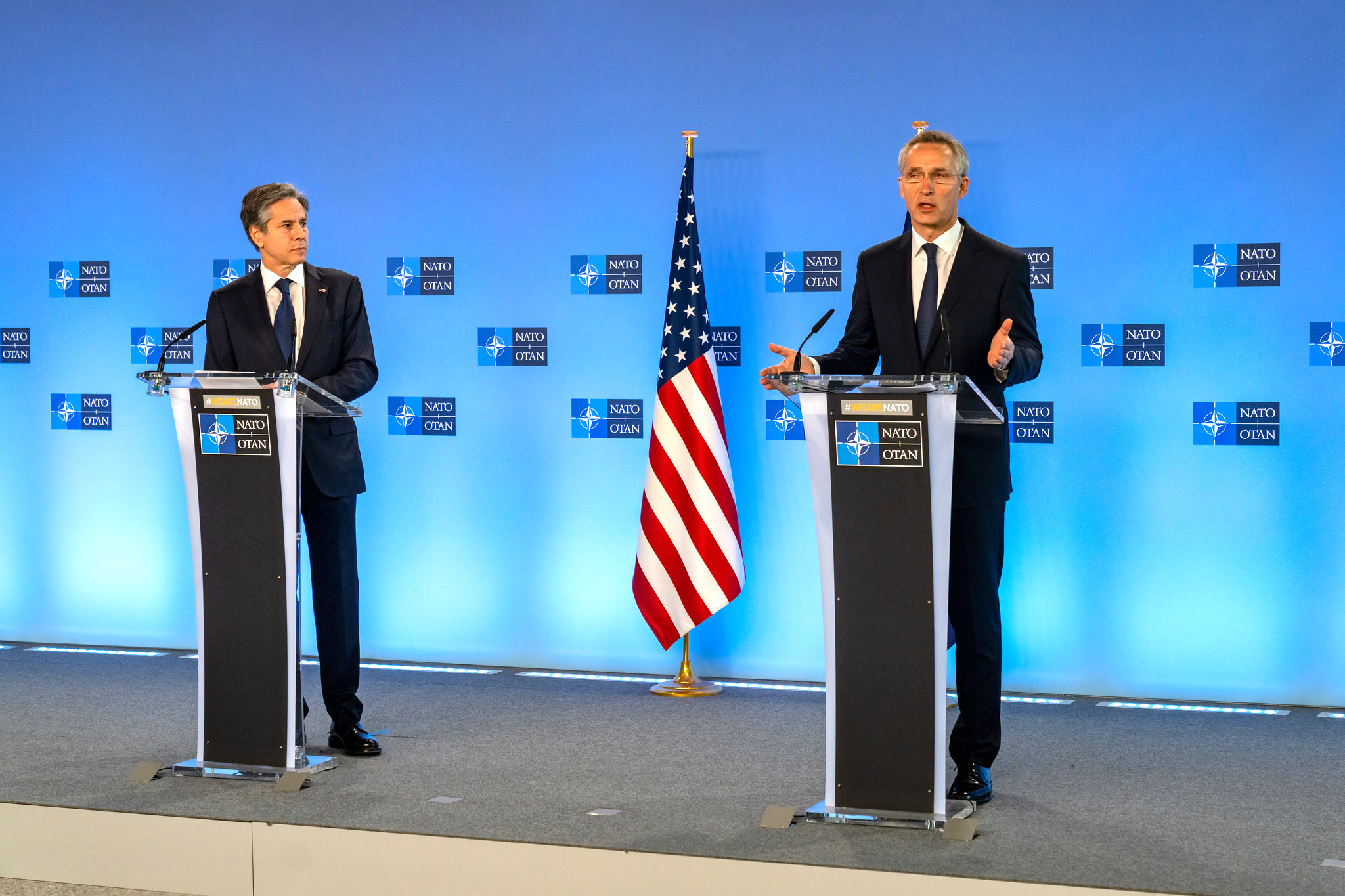 The Stockholm International Peace Research Institute’s 2019 estimates show the U.S. military budget of $732 billion is 38 percent of global military expenditures, while China’s $ 261 billion is 14 percent and Russia’s military budget of $61 billion is 3.4 percent. Six of the 15 highest military global spenders are members of NATO: the U.S., France, Germany, the U.K., Italy and Canada. Together, these six accounted for 48 percent ($929 billion) of global military expenditure. Total spending by all 29 NATO members was $1035 billion in 2019.

At the March meeting, NATO members spoke frequently about China’s increasingly global military footprint, including the development of an overseas base in Djibouti, which now “hosts” military bases of the United States, France, Italy, Saudi Arabia, Spain, Japan and China. China also has several smaller bases around the world, including in the province of Neuquén, Patagonia, Argentina, on land loaned to the Chinese government during Cristina Fernández de Kirchner’s presidency. China claims the land is for space exploration and intelligence services. The Chinese government also has a naval electronic intelligence facility on the Great Coco Island of Myanmar in the Bay of Bengal and a small military post in south-eastern Tajikistan.

China has a total of 13 military bases worldwide, including the nine on atolls in the South China Sea. For perspective, the United States has over 800 military bases around the world.

Meanwhile, NATO is also raising alarm about China’s economic Belt and Road Initiative, which includes a “belt” of overland road and rail corridors and a maritime “road” of shipping lanes and ports. 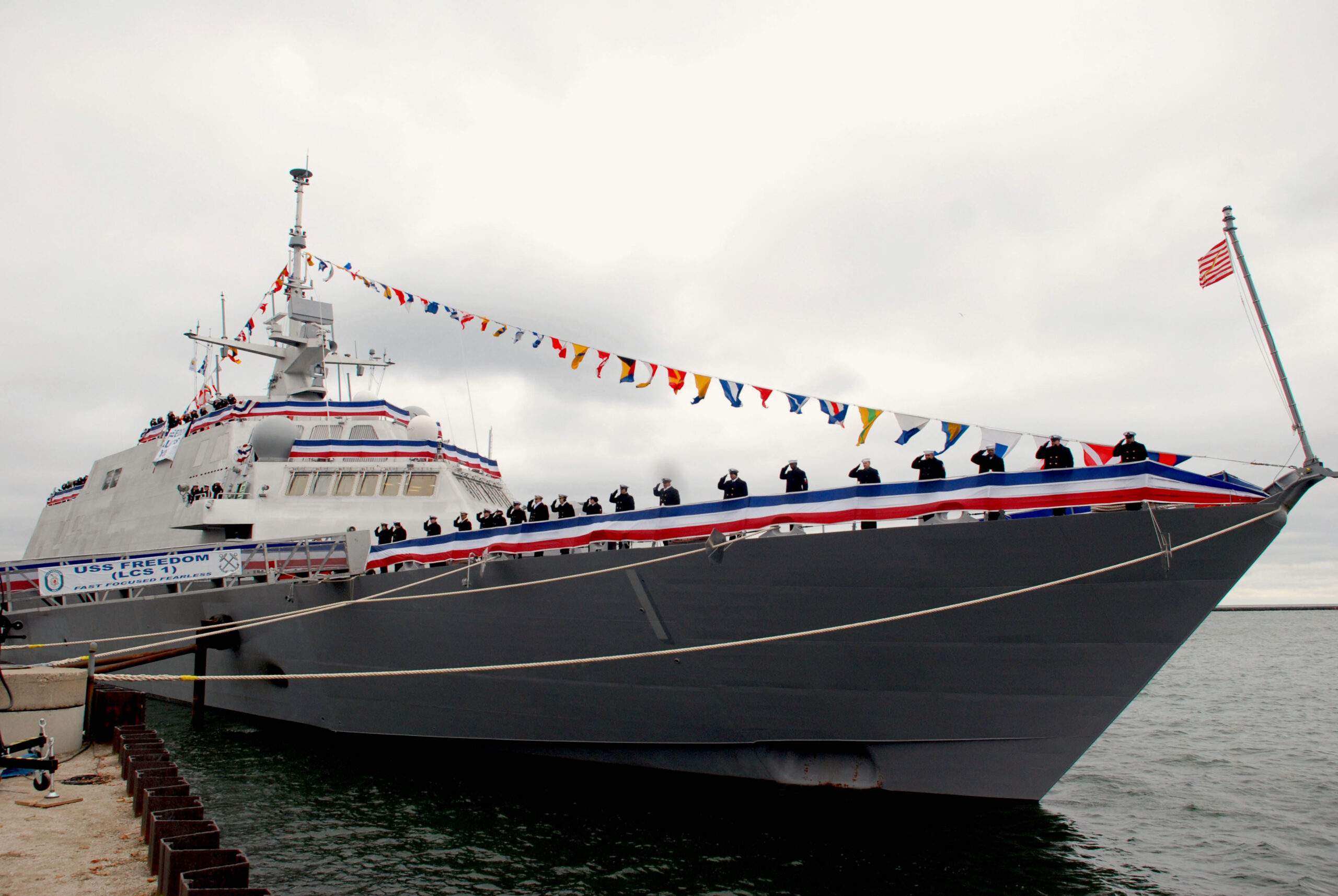 The groundwork has already been laid for NATO’s expansion into Asia: The dominant and continued presence of the United States in the Pacific has given NATO a permanent foothold in the region. The Obama administration’s “Pivot to Asia” was a NATO stepping-stone for increased military actions in the region.

For many years, NATO countries have participated in Rim of the Pacific (RIMPAC), the world’s largest naval exercise held every two years in Hawaii. In 2020, the COVID-modified RIMPAC had ships from 25 countries: Australia, Brunei, Canada, Chile, Colombia, France, Germany, India, Indonesia, Israel, Japan, Malaysia, Mexico, Netherlands, New Zealand, Peru, South Korea, Philippines, Singapore, Sri Lanka, Thailand, Tonga, United Kingdom, United States and Vietnam. China participated in the 2014 RIMPAC with four ships and in 2016, but was disinvited in 2018 due to its military activities in the South China Sea.

The United Kingdom and France have increased their presence in the Indo-Pacific. At the Shangri-La Dialogue in 2018, French and British defense ministers announced they would sail warships through the South China Sea to challenge China’s military expansion. The Shangri-La Dialogue is a security forum attended by defense ministers and military chiefs of 28 Asia-Pacific states and is named for the Shangri-La Hotel in Singapore where it has been held since 2002.

Subsequently, the United Kingdom deployed the HMS Albion to conduct freedom of navigation exercises near the Paracel Islands in August 2018 and conducted its first joint exercise with the United States in the South China Sea in 2019. NATO member France has exclusive economic zones in the Pacific around its overseas territories and in February 2021, France conducted a patrol through the South China Sea with a nuclear attack submarine and two other navy ships as a part of its freedom of navigation exercises.

Additionally, the U.S. military is already reorienting much of its military equipment and war maneuvers to the Pacific. The U.S. Army’s longstanding massive land maneuvers “Defender” exercises in Europe will be in the Pacific in 2021. Meanwhile, the U.S. Marine Corps is reorganizing its forces in the Pacific to be “fast moving counterweights to China’s growing navy fleet.”

NATO’s new strategy in the Pacific is for Marines, as well as small Army units, to operate in “littoral operations or operations around shorelines from the islands around the Western Pacific in small units with ship-killing missiles.” The Corps is testing missiles fired from these smaller vehicles, which according to the Marine Corps, will “make it incredibly hard for the enemy to find us. … We will have dozens and dozens and dozens of these platoons and vehicles placed strategically throughout the region.”

Currently, the Marines have two regiments on Okinawa and one in Hawaii. In the next two years, the new strategy calls for one littoral regiment each on Okinawa, Hawaii and Guam. 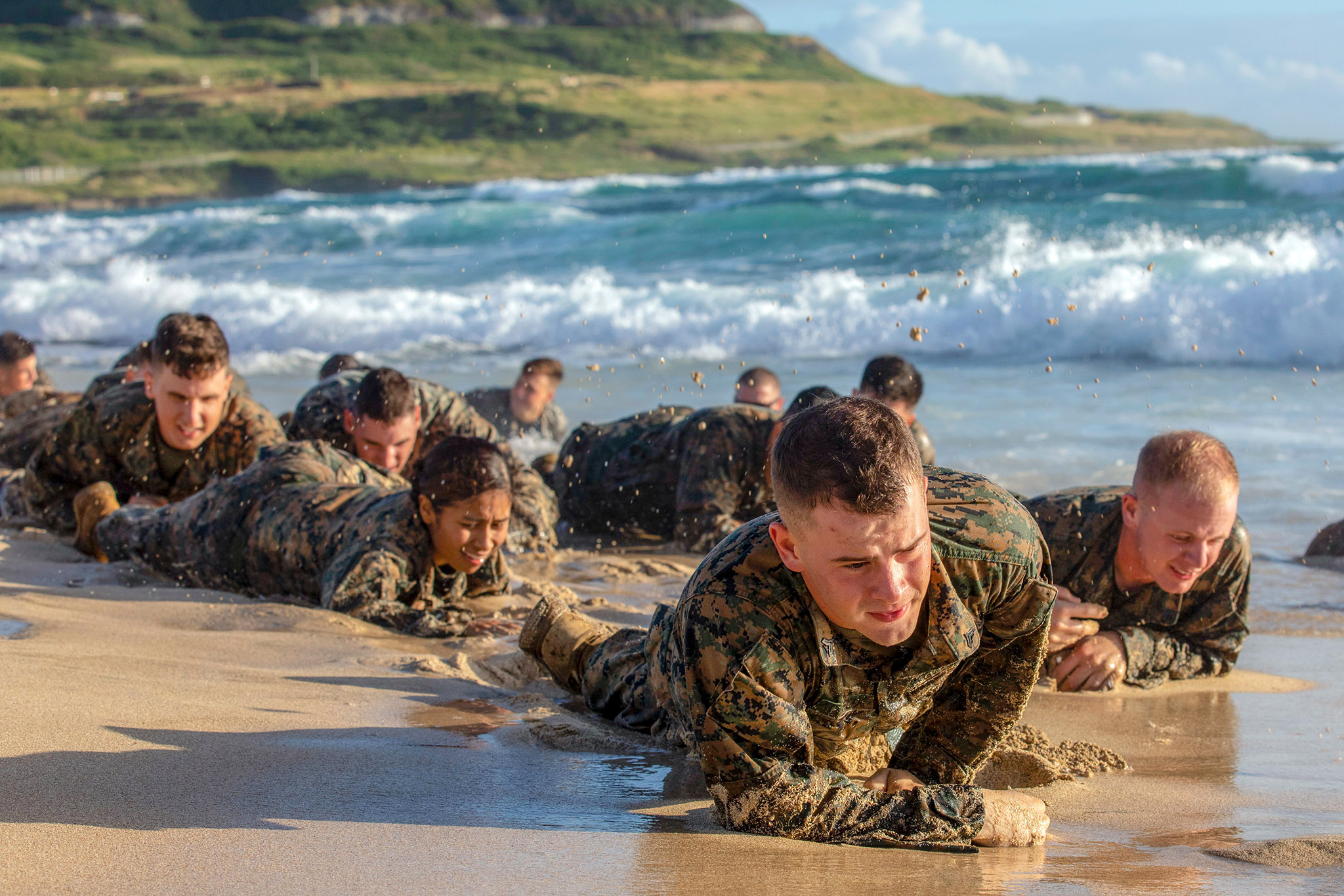 The new strategy not only redesigns units but is also redesigning the sea transportation to move the forces around the Pacific. According to the Congressional Research Service, the Light Amphibious Warship, a proposed new class of Navy vessel, will be between 200 and 400 feet long and cost $100 million. The Navy wants to have 28 to 30 of these amphibious ships, which will have the capability to pull up onto beaches. How many ships would be based in Hawaii, Guam and Okinawa remains unclear, as is where they would practice beach landings in the islands, which will be watched closely by local environmental activists.

The U.S. Marines are also adding weaponized drones to their war-fighting equipment. Beginning in 2023, 18 Predator drones will come into the Pacific region, 6 in Hawaii and the others going to Guam and Okinawa.

Meanwhile, the U.S. military is building new bases in the Pacific. In 2020, the president of Palau, a small Pacific island nation of a population of only 17,000, offered his country as a new base of operations for the U.S. military in the Pacific. The U.S. has already constructed a runway and has increased the number of U.S. Navy ships using Palau’s ports. The Trump administration quickly sent the secretary of defense and secretary of the navy to consolidate the agreement. Palau already receives extensive funding from the U.S. through an economic and defense agreement called the Compact of Free Association.

U.S. military operations from other Pacific islands have increased in recent years. U.S. nuclear submarines, aircraft carriers and their accompanying escorts of 10 ships and B-2 nuclear-equipped bombers operate daily from the U.S. territory of Guam on “freedom of navigation” sea drills and overflights of Taiwan, Okinawa, Japan and South Korea.

The Chinese military has responded with its own naval drills in the South China Sea and air armadas of 18 aircraft flying to the edge of Taiwan’s air defense zone during the Trump administration’s increased diplomatic engagement and military sales to Taiwan, an island the People’s Republic of China (PRC) considers as a renegade province of the PRC.

The level of air and sea confrontation in the Western Pacific between the U.S. and NATO forces and China has increased dangerously over the past two years, and it’s only a matter of time until an accident or purposeful event presents a potential war incident that can lead to horrific consequences.

As NATO advisers name China as the No. 2 threat to the organization after Russia, the U.S. top diplomat echoes their rallying call as the U.S. military ramps up its forces in the Pacific region. These worrisome developments suggest the U.S. will continue to play a leading role in pushing NATO to train its sights on China, which will heighten the dangerous confrontation in the Western Pacific.

Ann Wright spent 29 years in the U.S. Army/Army Reserves and retired as a Colonel. She also was a U.S. diplomat for 16 years in U.S. embassies in Nicaragua, Grenada, Somalia, Uzbekistan, Kyrgyzstan, Sierra Leone, Micronesia, Afghanistan and Mongolia.  She resigned from the U.S. government in March 2003 in opposition to the U.S. war on Iraq.  She is the co-author of Dissent: Voices of Conscience.  She lives in Honolulu, Hawaii.