Nothing in his record suggests diplomacy, say Jeff Cohen and Norman Solomon. 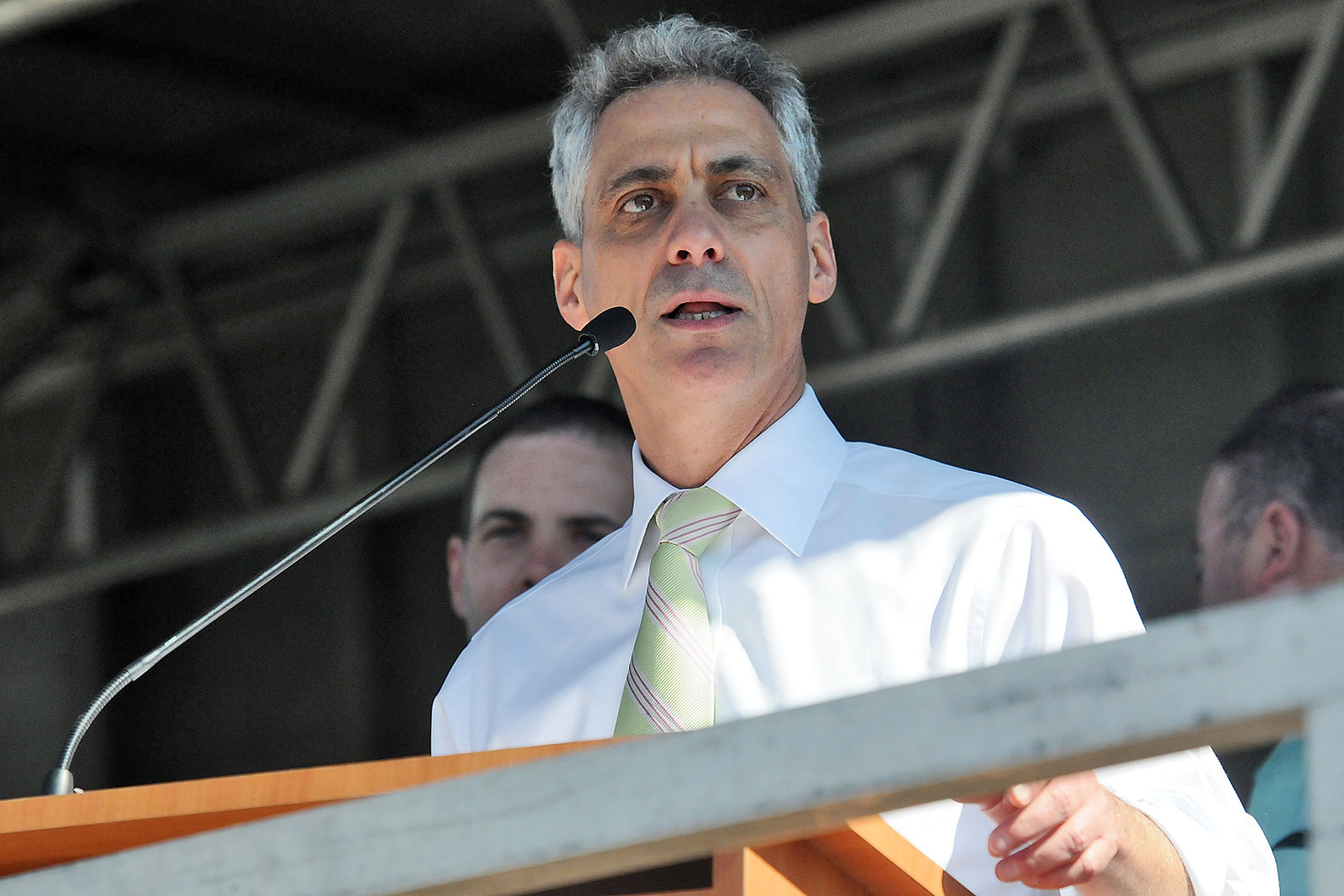 Rahm Emanuel has never been associated with the word “diplomatic,” but news reports say that President Joe Biden is seriously considering him for a top position as U.S. ambassador to Japan or China. Naming Emanuel to such a post would be an affront to many of the constituencies that got Biden elected. The saga of Emanuel’s three decades in politics is an epic tale of methodical contempt for progressive values.

One thing Emanuel can’t be accused of is inconsistency. During his political career, he has steadily served elite corporate interests, and rarely the interests of the broad public or the causes of racial justice or peace.

Emanuel rose to prominence as the finance director for Bill Clinton’s 1992 presidential campaign. He excelled at pulling in large checks from super-wealthy individuals. As a high-level Clinton administration aide, he played a major role — and bragged about it — in the passage of the disastrous NAFTA trade bill, which was strongly opposed by unions, environmentalists and most Democrats in Congress. He also was a sparkplug for passage of the mass incarceration-oriented 1994 Crime Bill, with prison term-lengthening provisions like “three strikes.”

In 1996, Emanuel boasted to a Washington Post reporter of the administration’s “tough” policies on “wedge issues — crime, welfare, and recently immigration.” In a memo that year, he urged Clinton to move rightward on immigration policy by working to “claim and achieve record deportations of criminal aliens.”

The next year, Emanuel’s approach was explained by a senior staffer at the Immigration and Naturalization Service who worked closely with him:

“As long as we dealt with illegal immigration, we could be to the right of Atilla the Hun. Rahm felt that Americans believed too many people were coming into this country, too many foreigners, so he wanted to show the administration returning people, deporting them, putting up bigger fences, sending them back.”

In July 1996, the Republican-controlled Congress pushed through its punitive “welfare reform” bill that ended the Aid to Families with Dependent Children program, added work requirements and gave states the power to slash support. 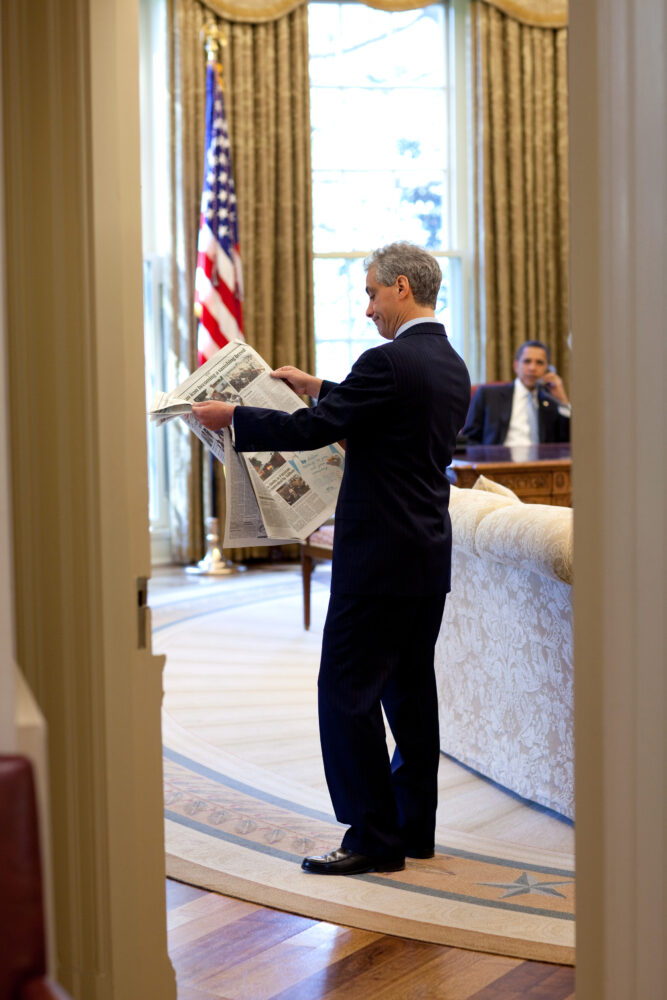 In the intense White House debate over whether to sign the bill, Emanuel was one of the strongest voices urging Bill Clinton not to veto the bill, as the president had done with earlier GOP welfare bills. Clinton signed the “Personal Responsibility and Work Opportunity Act of 1996,” prompting an outcry from anti-poverty activists and high-level administration resignations.

After leaving the Clinton administration in 1998, Emanuel made a quick $18 million in two and a half years as managing director of the Wall Street investment bank Wasserstein Perella, working out of its Chicago office.

Elected to Congress in November 2002, Emanuel supported George W. Bush’s disastrous Iraq invasion, and defended the war after most Democrats in Congress and most of the public had turned against it. As head of the Democratic Congressional Campaign Committee in 2006, Emanuel seemed oblivious to the change in public opinion. While he took credit for Democrats regaining the House majority, his selection of right-leaning candidates, including Iraq war supporters like himself and former Republicans, ultimately led to GOP gains.

While serving as President Barack Obama’s chief of staff in 2009 and 2010, Emanuel argued for mollifying healthcare reform opponents by significantly weakening Obamacare. (He acknowledged years later it was a good thing Obama didn’t listen to him.) In a 2010 meeting with liberal leaders who planned to publicly pressure the Democratic Party’s conservative wing into supporting healthcare reform, Emanuel famously called them “fucking retarded.”

Emanuel was known in D.C. for hyper-combativeness (earning him the nickname “Rahmbo”) and his ability to gain positive spin from corporate media: “He is on a first-name basis with every political reporter in Washington,” a Washington Post columnist asserted. 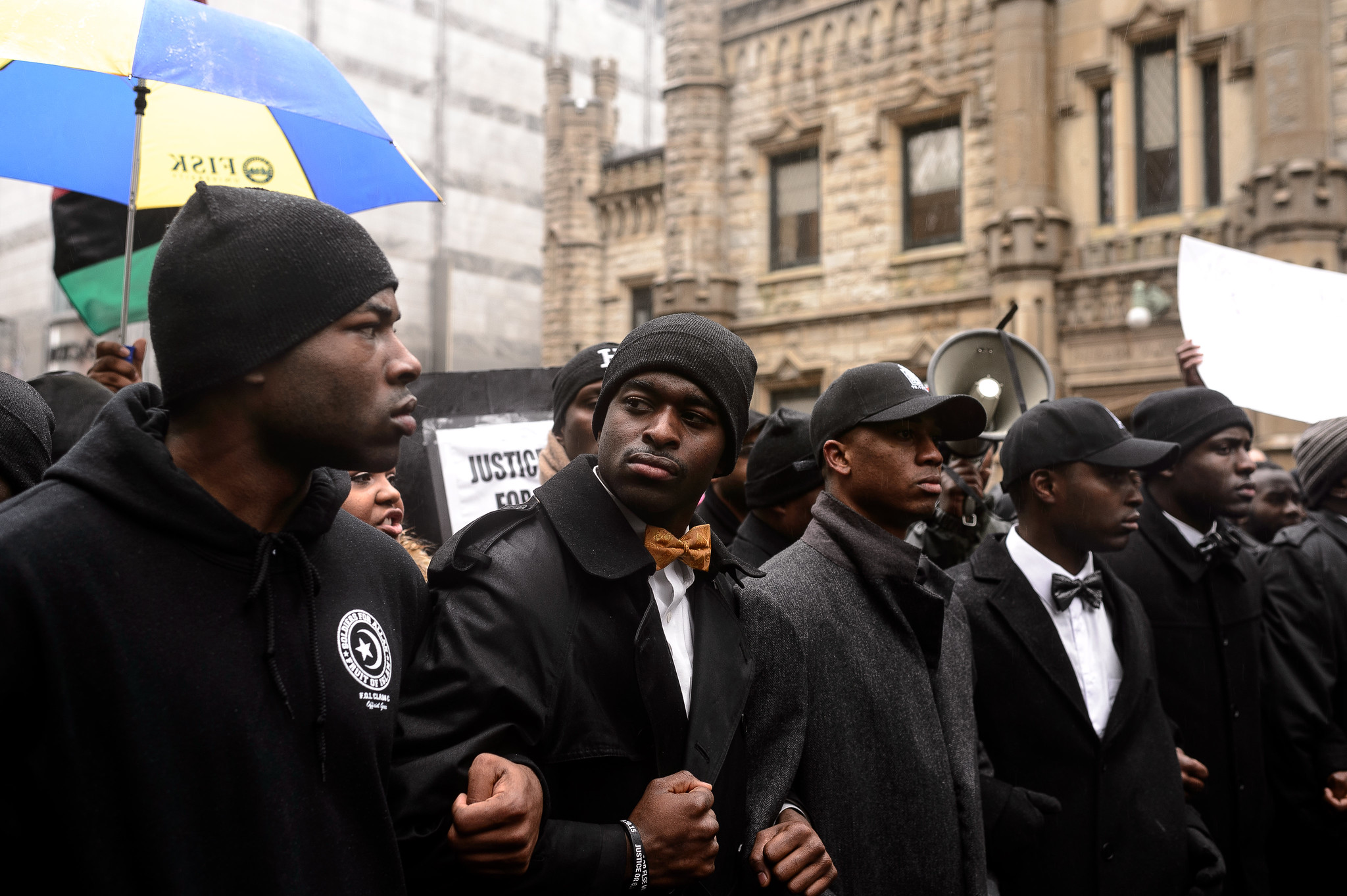 After being elected mayor of Chicago in 2011, Emanuel’s administration faced a series of scandals that included concerted warfare against the teachers’ union and the closing of 49 public schools, many in black neighborhoods.

In his 2015 bid for re-election, he was forced into a runoff by progressive challenger Jesus “Chuy” Garcia, a contest that would be decided largely by African American voters. Emanuel very likely would have lost the election except for the fact that for 13 months, through the duration of the campaign, his administration suppressed a horrific dashcam video showing the death of 17-year-old Laquan McDonald, an African American who’d been shot 16 times by a police officer as he walked away from the officer. (The city had paid $5 million to McDonald’s family without a lawsuit having been filed.)

Soon after a judge ordered the city of Chicago to release the video, polls found that only 17 percent of Chicagoans believed Emanuel when he said he’d never seen the video and that most city residents wanted him to resign as mayor.

When it was reported last November that Biden was considering him for a cabinet post, Rep. Alexandria Ocasio-Cortez tweeted: “Rahm Emanuel helped cover up the murder of Laquan McDonald. Covering up a murder is disqualifying for public leadership.” Then-Congressman-elect Mondaire Jones added: “That he’s being considered for a cabinet position is completely outrageous and, honestly, very hurtful.”

What is so hard to understand about this?

Rahm Emanuel helped cover up the murder of Laquan McDonald. Covering up a murder is disqualifying for public leadership.

This is not about the “visibility” of a post. It is shameful and concerning that he is even being considered. https://t.co/P28C0E4fYP

Emanuel’s 30-year campaign against pro-working-class policy reforms is unending. Asked last August how he would advise the Biden administration, he told CNBC: “Two things I would say if I was advising an administration. One is there’s no new Green Deal, there’s no Medicare for All.”

If Rahm Emanuel becomes the ambassador to China or Japan — countries with the world’s second- and third-largest economies — he will gain new leverage in a region bristling with ethnic and military tensions. Everything about his record indicates that such power would be vested in the wrong hands.

Days after Biden’s election, AOC told The New York Times that Emanuel’s inclusion in the Biden administration “would signal, I think, a hostile approach to the grassroots and the progressive wing of the party.”

We’ll soon find out whether Biden is willing to send such a signal.

Jeff Cohen is an activist, author and co-founder of RootsAction.org. He was an associate professor of journalism and the director of the Park Center for Independent Media at Ithaca College and founder of the media watch group FAIR. In 2002-2003, he was a producer and pundit at MSNBC. He is the author of Cable News Confidential: My Misadventures in Corporate Media.

This article is from NormanSolomon.com

9 comments for “Rahm Emanuel Under Consideration as Top Ambassador”