The winner of the 2021 Sam Adams Award will be announced at the World Ethical Data Forum, which runs from Wednesday through Friday.

Whistleblower Annie Machon has won this year’s Sam Adams Associates for Integrity in Intelligence award, which is being presented to her on Wednesday on the first day of the three-day World Ethical Data Forum. The late Prof. Stephen Cohen of Princeton and New York University will also be honored for his service as a leading Russia specialist.

[To watch the awards ceremony and the rest of the World Ethical Data Forum, which has a host of well-known speakers (including Sam Adams associates) on data security, artificial intelligence and independent journalism in the cyber era, go to this website. Consortium News readers can register for the March 17-19 event with this 50 percent discount code: WEDFTeamAnnie50] 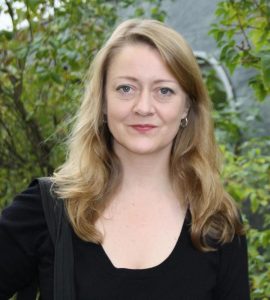 Britain’s domestic intelligence service MI5 recruited Machon as soon as she completed her studies at Cambridge University and she worked at MI-5 for six years during the early 1990s. When Machon learned the agency was secretly surveilling left-wing politicians and government officials with oversight responsibility for MI5 itself, she found herself not “ethically flexible” enough to ignore such abuses.

Meanwhile, her partner and MI5 colleague, David Shayler, learned that more “ethically flexible” agents in MI6 (Britain’s CIA) were planning to assassinate Libyan leader Muammar Gaddafi (a fate he was to meet many years later).

Machon and Shayler ended up blowing the whistle on these and other abuses. They resigned in 1996 and went on the run the following year aiming to create, in Machon’s words, “a bit of a scandal”, hoping to draw attention to the substance of the abuses and prompt an inquiry. She describes Shayler’s fearlessness and integrity as “astonishing.”

After three years on the run — hiding mostly in France — they returned to the UK, where Machon was arrested (but never charged). The powers-that-be, however, chose to make an example of Shayler (not unlike what they are now doing to WikiLeaks publisher Julian Assange). They threw the book at him.

His whistleblowing case dragged on for seven years, during which he did a brief stint in Belmarsh, the infamous high-security prison where Assange still rots (having been denied bail, yet again). A strong mitigation plea by Machon helped reduce Shayler’s remaining prison time. All in all, though, what he was forced to endure took a hard toll on him. More broadly, the issues that surfaced around whistleblowing then, remain largely the same two decades later.

In her Sam Adams award acceptance speech, Machon is expected to allude to this background, since it goes a long way toward explaining why Annie herself has been such an intrepid supporter of whistleblowers — like Assange, Chelsea Manning, and Edward Snowden. Machon is also a go-to mentor and networker for young people interested in (true) stories of officials for whom the word “ethical” proved to be more than just a nice sounding adjective.

The first part of the Sam Adams awards ceremony will be devoted to honoring Professor Cohen with a posthumous award for scholarship, courage, and integrity. His widow, Katrina vanden Heuvel, will read the citation and add her own remarks.

Machon, one of the leaders of the World Ethical Data Foundation, is the 19th Sam Adams laureate. Her award calls to mind the courageous example of the first two winners: FBI special agent and counselor Coleen Rowley (2002); and GCHQ Mandarin translator Katharine Gun (2003). [See Katharine played by Keira Knightly in the 2019 film Official Secrets.”] Other winners were Assange (2010) and Manning (2014).

← Neoliberalism Was Born in Chile & Will Die in Chile
PEPE ESCOBAR: The Raging Twenties: A New Map of Dystopia →