Max Blumenthal reports on the sadistic contents of Richard Nephew’s book on the “art of sanctions.” 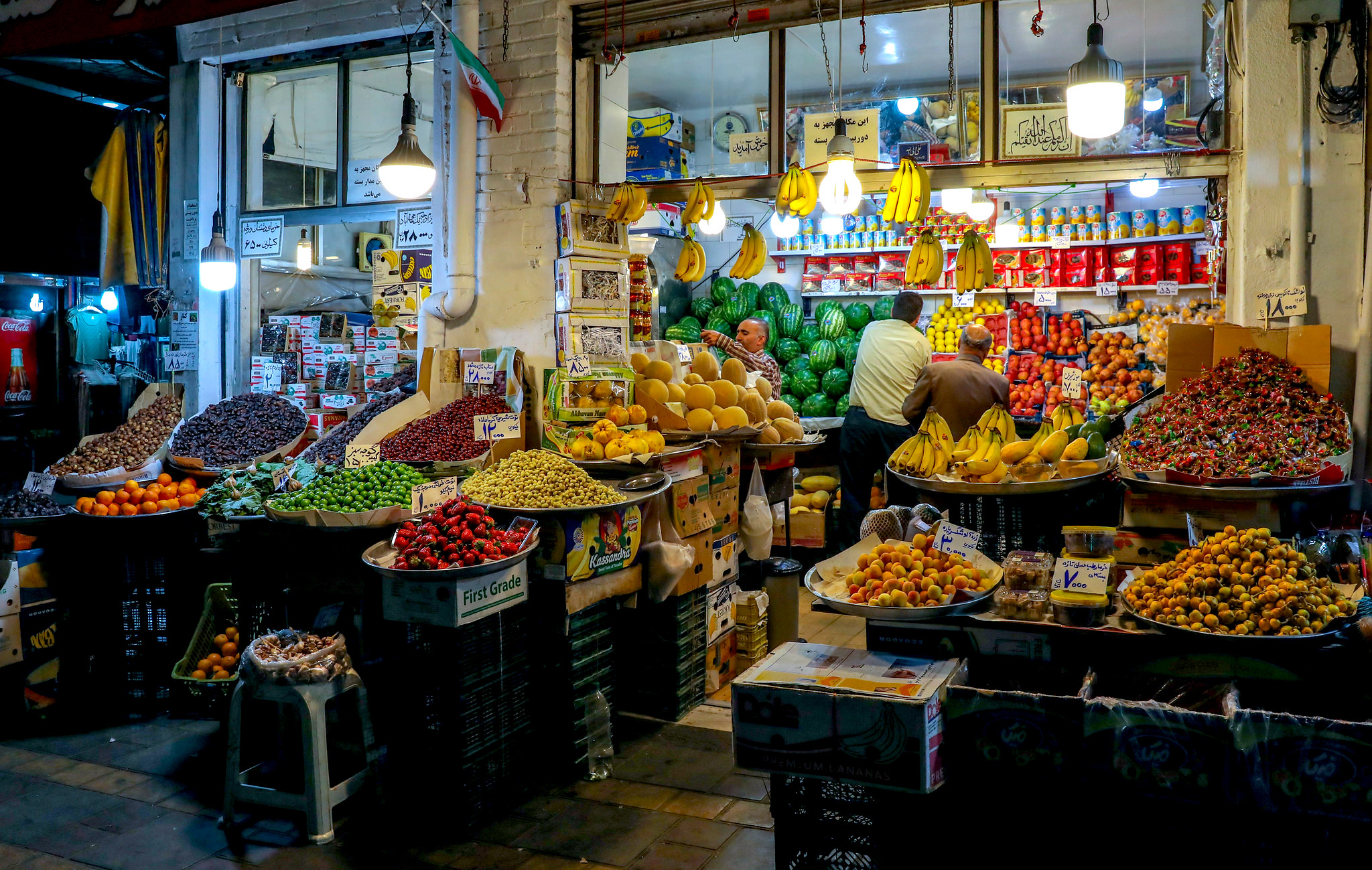 Nephew has described the destruction of Iran’s economy as “a tremendous success,” and lamented during a visit to Russia that food was still plentiful in the country’s capital despite mounting U.S. sanctions.

Nephew’s appointment to a senior diplomatic post suggests that rather than immediately returning to the JCPOA nuclear deal, the Biden administration will finesse sanctions illegally imposed by Trump to pressure Iran into an onerous, reworked agreement that Tehran is unlikely to join.

After coordinating Obama’s sanctions regime against Iran, Nephew left the administration for a position at the energy industry-funded Center on Global Energy Policy at Columbia University. There, he published a book outlining in blunt terms how he honed the craft of economic warfare and applied it against Iran.

Entitled “The Art of Sanctions: A View From The Field,” the book’s cover image features two Caucasian hands drawing a rope for a noose, presumably to strangle some insufficiently pliant Global South government. Its contents read like a list of criminal confessions, detailing in chillingly clinical terms how the sanctions Nephew conceived from inside an air-conditioned office in Washington immiserated average Iranians.

With his candor, Nephew has shattered the official U.S. rhetoric about “targeted sanctions” that exclusively punish “bad actors” and their business cronies while leaving civilian populations unharmed.

I just read @RichardMNephew's "The Art of Sanctions."

Nephew, ex-Obama State Dept sanctions coordinator, clinically & chillingly details how pain is the essence of the US global sanctions regime.

Unfortunately, he hasn't been honest about the contents of his own book. Thread: pic.twitter.com/r5y9bc93eU

The application of pain to a country’s civilian population is central to Nephew’s sanctions strategy. As he explains in “The Art of Sanctions,” for the unilateral coercive measures to succeed, they must impose significant pain to a state’s most vulnerable sectors, shatter the state’s political and social resolve, and ultimately force the state to cry uncle in the face of Washington’s demands. 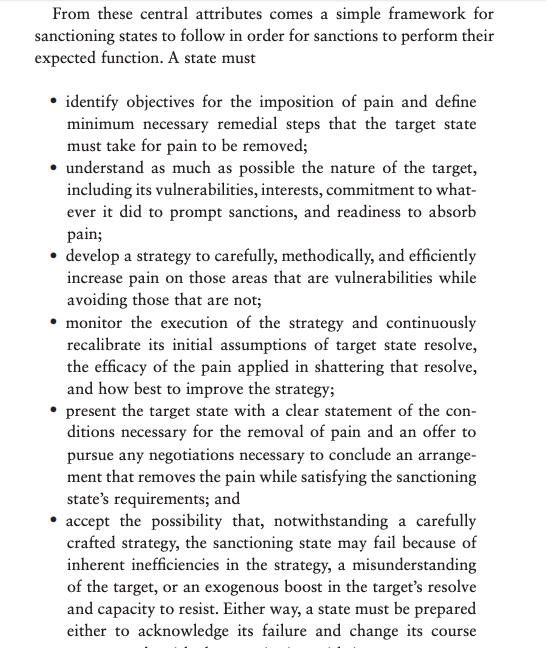 An excerpt from Richard Nephew’s book The Art of Sanctions.
.

Nephew detailed how, as JCPOA negotiations got underway in January 2012, he led a process to reduce Iran’s oil revenue and starve its economy.

After the Obama administration successfully pushed for a wholesale reduction in oil exports and other unilateral coercive measures, Iran’s economy went from a period of growth to a sudden and staggering contraction, while the value of its currency tumbled.

Nephew pronounced the economic assault he engineered to be “a tremendous success.” 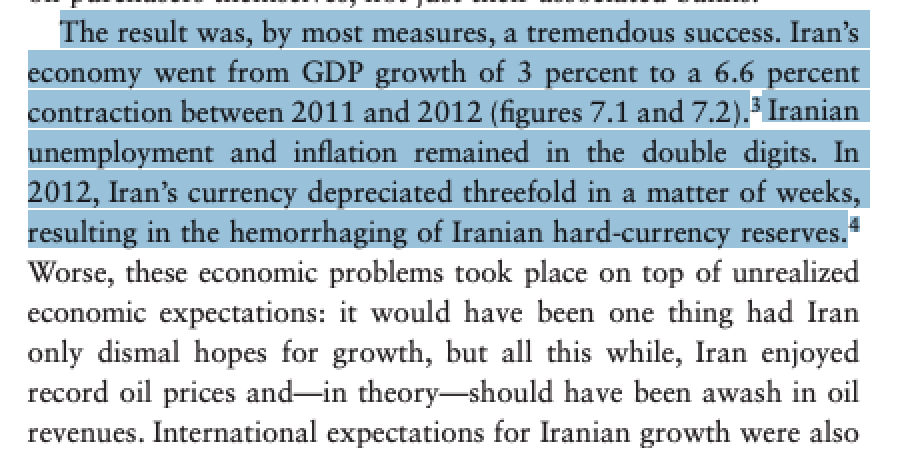 An excerpt from Richard Nephew’s book The Art of Sanctions.

Nephew also patted himself on the back for tripling the price of chicken “during important Iranian holiday periods,” thereby “contribut[ing] to more popular frustration in one bank shot than years of financial restrictions.”

Next, he boasted of more sanctions targeting civilians to prevent Iranians from obtaining the assistance they needed to repair their cars. “Iran’s manufacturing jobs and export revenue were the targets of this sanction,” Nephew wrote.

There were some goods that Nephew wanted Iran to import, however. In hopes of fomenting social unrest, he said Washington “expanded the ability of U.S. and foreign companies to sell Iranians technology used for personal communications” so they could “learn more about the dire straits of their country’s economy…”

More on those rising chicken prices: 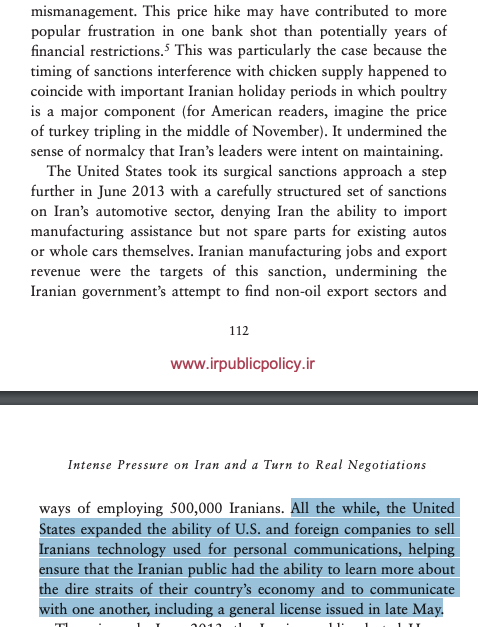 During a Dec. 6, 2017, panel discussion about his book at Columbia University’s Center on Global Energy Policy, Nephew detailed with a chilling smile how he not only sabotaged Iran’s automotive industry, but targeted “things like unemployment, to try to drive that up and make things a little more sticky.”

While discussing his book, "The Art of Sanctions," @richardmnephew boasted with a wide grin that the economic warfare tactics he devised drove up unemployment rates in Iran.

In response to online criticism, Nephew has claimed that “the main target” of the sanctions regime he designed was “the oligarchs.” But his book on “The Art of Sanctions” tells another story.

Nephew fondly recalls how he structured sanctions to sabotage Iranian economic reforms that would have improved the purchasing power of average people.

The Obama administration destroyed the economic prospects of Iran’s working-class majority while ensuring that “only the wealthy or those in positions of power could take advantage of Iran’s continued connectedness,” he wrote. As “stories began to emerge from Iran of intensified income inequality and inflation,” Nephew pronounced another success.

As he made clear, the rising inequality “was a choice” that Washington “made on the basis of helping to drive up the pressure on the Iranian economy from internal sources.” Nephew went on to claim credit for October 2012 protests brought on by the devaluation of Iran’s currency. 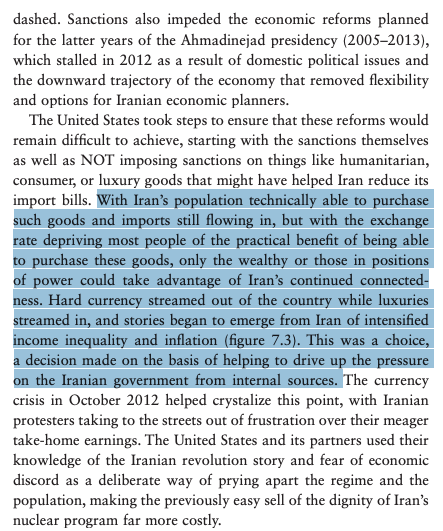 In a fairly stunning admission, Nephew admits at one point that despite providing Iran with supposed humanitarian exceptions on U..S sanctions, the economic war he helped design caused a catastrophic shortage of medicine and medical devices, largely because average Iranians could not afford them. 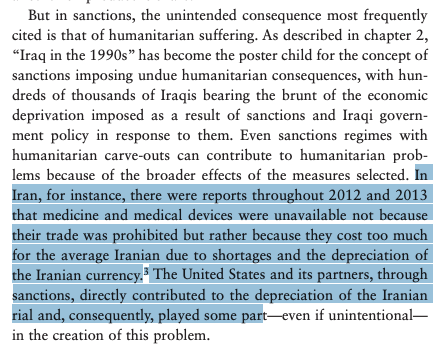 Despite acknowledging the heavy toll of human suffering brought on by the sanctions he personally conceived, suggesting they could have prompted high numbers of excess deaths, Nephew appears to be devoid of contrition.

During a December 2016 trip to Moscow, he complained that despite the sanctions imposed on Russia by the U.S., food was still widely available at local restaurants – “hardly a level of pain” that was necessary to bring the Kremlin to heel.

He called to “develop a strategy to carefully, methodically, and efficiently increase pain on those areas [of the Russian economy] that are vulnerabilities and avoid those that are not.”

The Banality of Richard Nephew

So who is Richard Nephew? Does he lurk in the shadow world of intelligence intrigues and spook wars, keeping a low profile while he waits to strike the enemy? Or is he a fire-breathing hardliner bellowing threats against America’s adversaries from Beltway think tank panels? The reality is much more banal.

When he is not snatching chicken from Iranian kids during their winter holiday, Nephew is spending quality time with his own, amusing them with his tattered dad rock t-shirts and flashing arms adorned with tribal tattoos.

In an administration filled with fun-loving, ethnically diverse characters who moonlight as rock guitarists, decorate the walls of their homes with Haitian art, bob their heads to Tupac, and even enjoy an occasional toke, all while keeping the gears of a ferociously violent empire grinding along, the tattooed sanctions artist seems like a perfect fit.

Meanwhile, in Iran, where a leading daily recently portrayed Nephew as Keanu Reeves in the horror film The Devil’s Advocate, his elevation to a senior diplomatic role is viewed as a sign of more pain to come.

Max Blumenthal is an award-winning journalist and the author of books including best-selling Republican Gomorrah,  Goliath,  The Fifty One Day War and The Management of Savagery. He has also produced numerous print articles for an array of publications, many video reports and several documentaries including “Killing Gaza” and “Je Ne Suis Pas Charlie.” Blumenthal founded The Grayzone Project in 2015 to shine a journalistic light on America’s state of perpetual war and its dangerous domestic repercussions.