It is a phrase for effectively challenging the system now managed by people such as Biden, Modi and Piñera, writes Vijay Prashad. 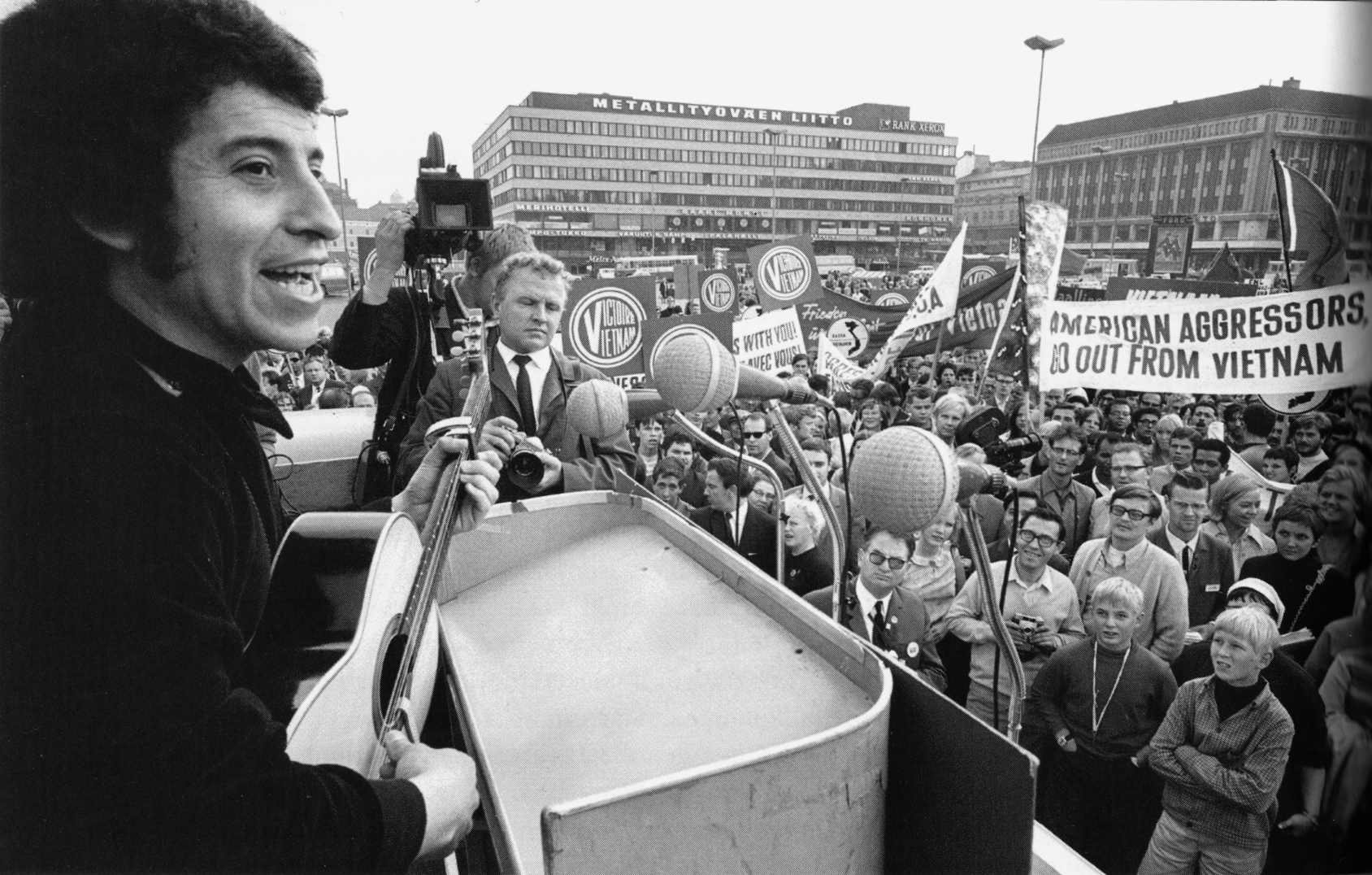 On a warm late February day in Santiago, I went to the grave of Victor Jara to pay homage to the man who was brutally killed on  Sept. 16, 1973. A theater director, songwriter and communist, Jara was arrested after the coup d’état against the socialist government of Salvador Allende. He was tortured and then murdered.

At the rear of the Cementerio General in Recoleta, Jara was buried with other victims of the military dictatorship of General Augusto Pinochet. In 2009, Jara’s body was exhumed as part of the investigation into this murder and he was reburied a short distance away. On the original tomb in simple paint are the words el derecho de vivir en paz , “the right to live in peace.”

These words are from the title song of Jara’s 1971 album. The song, which opens the album, is an homage to the Vietnamese people, who were led by Ho Chi Minh in their fight against U.S. imperialism.

It is a simple song, which starts with this line of dignity about the right to live in peace. It then reflects on Ho Chi Minh, the poet, who strikes from Vietnam for all humankind. Vietnam’s people declared independence in 1945 when Jara was 13. Before they could advance their socialist agenda, a war was imposed on them, first by France and then by the United States. The United States used its entire arsenal – short of nuclear weapons – against the Vietnamese people, who fought with great determination to free their country. 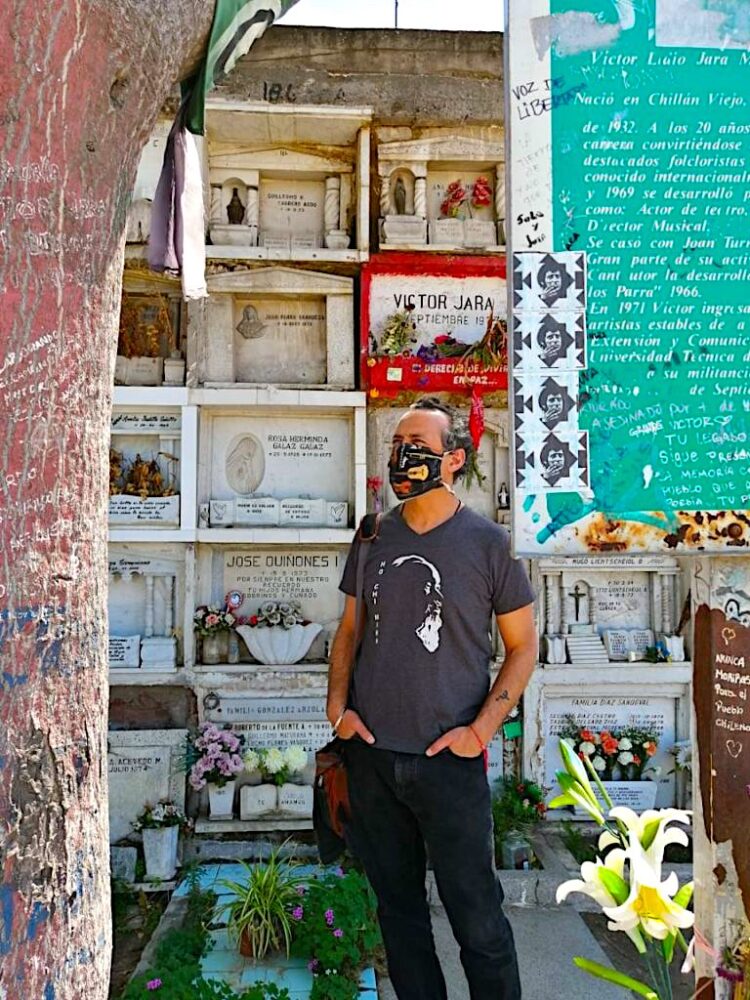 The author at the grave of Victor Jara.

Two things about this war were clear to revolutionaries around the world. First, that the defeat of the Vietnamese people would result in a great setback for the national liberation agenda around the world, since it would give the United States and its allies confidence to smash other liberation movements. Second, that every sensitive person who was committed to decolonization and freedom had to “create two, three or many Vietnams,” as Che Guevara wrote in his Message to the Tricontinental (1966). Che Guevara was assassinated in 1967 at the age of 39; Victor Jara was only 40 when he was murdered.

By 1971, the Vietnamese had gained great confidence, holding the north of the country despite ruthless aerial bombardment and the use of chemical weapons. They pushed into the south – including with the 1968 Tet Offensive – towards Saigon. Ho Chi Minh died in 1969, steadfast to the end. Jara’s song is a tribute to Ho Chi Minh and the Vietnamese fighters; it demonstrated the necessity for an internationalist attitude to freedom. This song is the fire of pure love, an international song that declares the right to live in peace.

Songs such as this never disappear. Within them lie the principle of hope, the inspiration for struggle, and the anticipation of a world beyond our own.

Walking around the Plaza de la Dignidad in Santiago, Chile, one sees images of Jara and quotes from his songs on the walls. These are painted by various political groups and muralists who feel a direct connection to their radical past and who feel that the residue of the dictatorship remains.

Every Friday evening, a large group of people gather there not only to protest the meanspirited government of Sebastián Piñera that came into power in 2018, but more broadly to protest the general neoliberal orientation of governments since 1973. 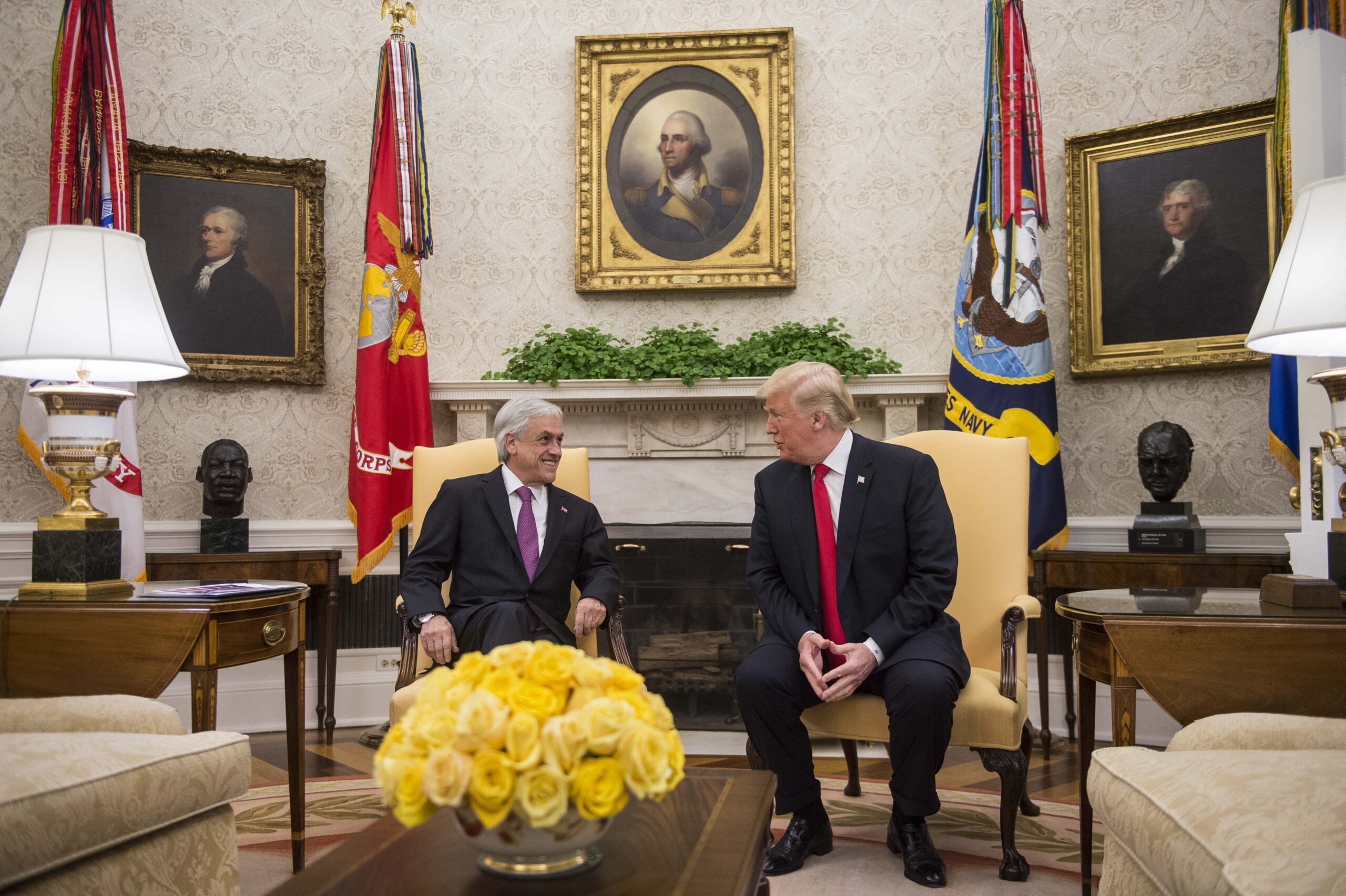 Piñera, a conservative who opposed the prosecution of Pinochet, has run an austerity government that has provoked mass protests, first from school students and then from the general public. The government’s response to this wave of protests was harsh repression, as well as illegal detentions and police violence of all kinds (including sexual violence). Protesters and journalists such as Gustavo Gatica were hit in the eye with rubber bullets, which reminds me of Mohamed Sobhi el-Shenawy, the “eye sniper,” who shot protestors in Tahrir Square in Cairo, Egypt in 2011. 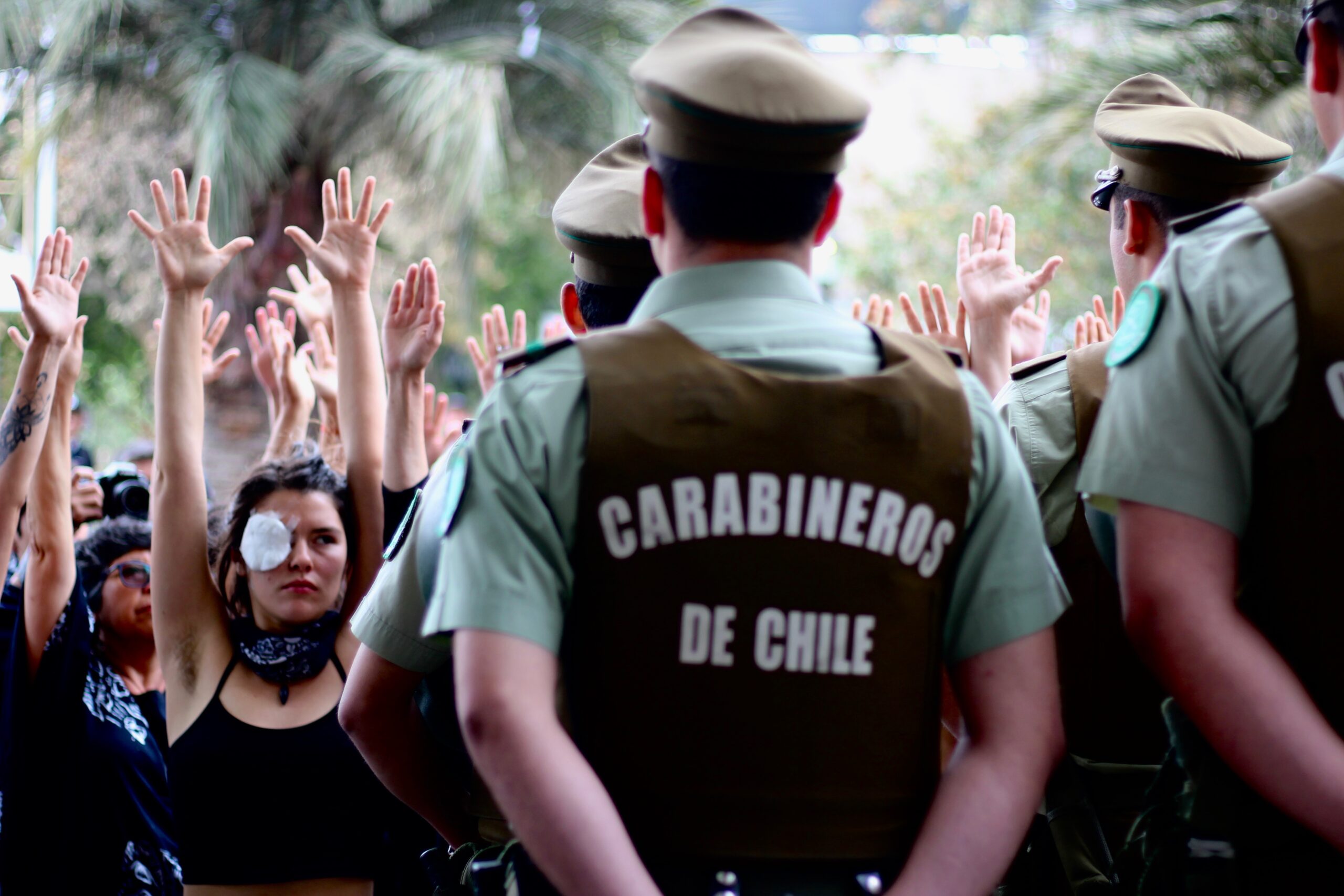 Protest in November 2019 in after the first cases of eye injuries caused by police. (Marcellablues, CC BY-SA 4.0, Wikimedia Commons)

Despite a court ruling in 2018 that sentenced eight retired officers to 15 years imprisonment for Jara’s murder, genuine justice for him lives only in those advancing his call.

In 2019, Jara’s song returned as the anthem of this new movement, sung with great feeling by his peers in Inti-Illimani at the Plaza. At the protest in Plaza de la Dignidad on a typical Friday evening last month, I watched the police fire their water cannons and march with the full swagger of impunity towards protesters who have become familiar with this routine of their democracy and the repression of state forces. Jorge and Marcello Coulón told me of the immense emotion they felt as they walked through the enormous crowd onto the stage to sing Jara’s song to Ho Chi Minh.

Since 1980, Chile has functioned with a constitution put in place during the dictatorship of Pinochet. It made sense, therefore, for the waves of protests to crash down on the demand for a new constitution. In 2020, 78 percent of the country voted to draft a new constitution; in April 2021, they will vote in the constituent assembly to frame it.

An Anthem for Our Time

What does it mean that Jara’s song returns as an anthem in our time, its call for the right to live in peace laden with meaning across generations?

This is a song by a Chilean written for the Vietnamese revolution, but with the sensibility that both Vietnam’s struggle and the song are international. Nothing in the struggles in Chile suggests an insular story, since the pressures borne on the population are not unique to Piñera and his government, nor to the Chilean oligarchy.

Austerity programs result from a tax strike by the elites, who prefer their wealth to be hidden in illicit tax havens than be used productively. They disregard the long-term suffering of workers who struggle to survive as the pandemic deepens their already perilous existence and provoke the kind of protest movement that has marked Chile’s reality.

The sight of jubilant non-violent crowds singing songs of resistance are as familiar as the sight of police trucks firing high-pressure water and tear gas. No wonder that Roger Waters’ version of El derecho de vivir en paz in 2020 carried the full flavour of this international song being tasted from the streets of Delhi to New York.

On Feb. 28, a million people gathered under red flags at Kolkata’s Brigade Ground as the Indian state of West Bengal began an election campaign. “We demand our rights,” said communist leader Mohammed Salim, the right to live in peace. There are echoes everywhere of the Chilean anthem to Ho Chi Minh. Not far from where Salim spoke is a U.S. consulate, which sits on Ho Chi Minh Sarani, the street renamed during the U.S. war on Vietnam as an act of solidarity.

Today, there is no longer that kind of clarity in the left about the nature of our fights and the need for international solidarity. U.S. imperialism’s sharp attacks against Cuba and Venezuela continue, whilst U.S. President Joe Biden — in the absurd name of “self-defense” — authorized the bombing of Syria.

Where there should be a straightforward defense of the people’s right to chart their own agenda, there is instead a policy of hybrid war that suffocates and delegitimizes entire populations.

I asked Marcelo Coulón of the legendary band Inti-Illimani, which sang Jara’s song in front of one of the massive manifestations in Santiago, what it meant to sing Jara’s anti-imperialist, internationalist anthems in our context:

“To sing to Ho Chi Minh today is a very special moment for me, because it makes me go back to the times when we were connected to the world, the solidarity world, the anti-imperialist struggle. And this shows me the terrible damage neoliberalism has done, transforming people into deeply individualist beings in which they don’t think beyond their own noses, their own interests. I think in the social outburst, people sang this song not only for the right to be able to live in peace, but for the right to live in comprehensive peace with dignity and solidarity. I don’t want to explain why [Jara wrote about] Ho Chi Minh, but I think everyone should understand this solidarity gesture…I gave blood for Vietnam, but now nothing happens.”

The standoff between the Indian farmers and the government of Prime Minister Narendra Modi enters its fourth month. The agendas of both Modi and Piñera are squeezed by their fealty to their corporate allies.

Neither has the temperament nor the ability to retreat from their hard positions of privatization, cronyism and state repression. The farmers and agricultural workers are experiencing the same kind of obduracy experienced by the people of Venezuela and Cuba. Despite the liberal pieties about human rights, there is a greater commitment to the interests of the few over the lives of the many. The necessity of “two, three or many Venezuelas” or “two, three or many farmers’ uprisings” has never been clearer, nor has solidarity been so essential.

The right to live in peace is not a meaningless phrase; it is effectively a challenge to the system now managed by people such as Biden, Modi, Piñera, and others. It is a call for a simple right that provokes war because it encroaches on the ability of the few to appropriate the greater share of social wealth.

As they say in Chile, Fuera Piñera, or “Quit Piñera,” a slogan as much for him as for the system that he – and others like him – uphold.

11 comments for “The Right to Live in Peace”