The idea that China or Russia pose a threat to you is so self-evidently ridiculous, so transparently absurd, that the only way to make you believe it would be to propagandize you, writes Caitlin Johnstone. 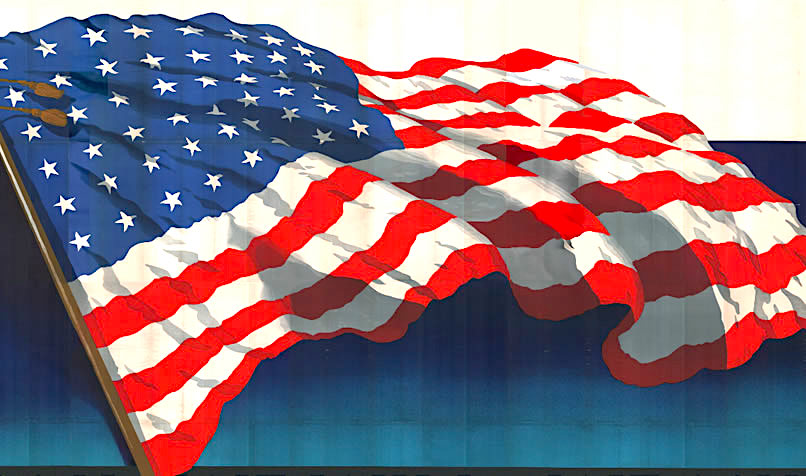 In a recent Mintpress News article titled “After Years of Propaganda, American Views of Russia and China Hit Historic Lows“, Alan MacLeod points the finger at the obvious culprit in this shift in public opinion:

“Last year, American military planners advised that the U.S. should step up its campaign of psychological warfare against Beijing, including sponsoring authors and artists to create anti-China propaganda. The Pentagon’s budget request for 2021 makes clear that the United States is retooling for a potential intercontinental war with China or Russia. It asks for $705 billion to ‘shift focus from the wars in Iraq and Afghanistan and a greater emphasis on the types of weapons that could be used to confront nuclear giants like Russia and China,’ noting that it requires ‘more advanced high-end weapon systems, which provide increased standoff, enhanced lethality and autonomous targeting for employment against near-peer threats in a more contested environment.’  …

Russia, meanwhile, has been the focus of Democratic Party ire since their defeat in the 2016 election. Prominent Democrats have accused Vladimir Putin of being behind the rise of Bernie Sanders, paying Afghans to kill American soldiers, and of helping spark the January 6 insurrection on the Capitol Building in Washington, D.C. RussiaGate — the belief that Moscow managed to hack the 2016 election, swinging the result for Trump — has hardened liberal attitudes towards the country and drastically increased suspicion and fear of Russians. This was crystallized by former Director of National Intelligence James Clapper’s comments on NBC’s Meet The Press, where he claimed that Russians are ‘typically, almost genetically driven to co-opt, penetrate, gain favor.’ As with China, the U.S. government has attempted to score diplomatic points, taking up the case of imprisoned politician Alexey Navalny.”

And, I mean, of course. Of course this is the case. There is no rational reason for anyone to hold particularly negative views of either of those countries based on actual facts in evidence, and there is certainly no rational reason to perceive them as a threat. The idea that China or Russia pose a threat to you is so self-evidently ridiculous, so transparently absurd, that the only way to make you believe it would be to propagandize you. And if you do believe it, that’s exactly what has happened. 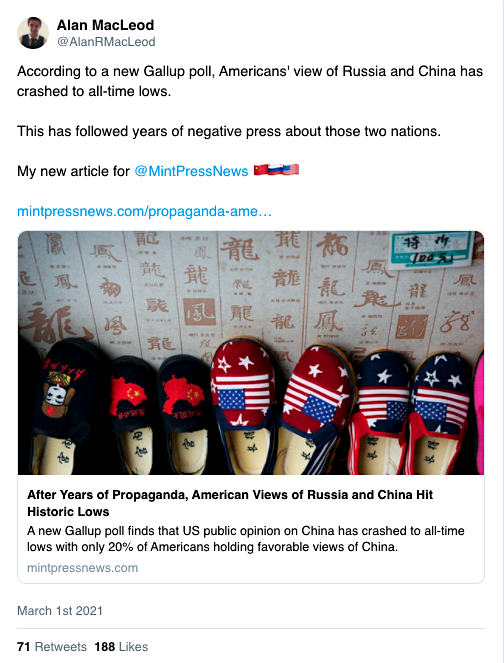 You can expand this principle to include the entirety of U.S. foreign policy on the global stage today. No ordinary American benefits from the U.S. having troops in Syria, sanctioning Venezuelans to death, supporting Saudi Arabia while it rapes Yemen, circling the planet with military bases and working to destroy any nation which refuses to bow to its dictates. The only way to get Americans to consent to any of these agendas is to propagandize them into doing so.

Indeed, you can also expand this principle to include our entire financial/economic/political system as a whole. Ordinary people would not accept as normal a system in which they have to toil long hours just to feed themselves while parasitic middlemen hoard all the profits and use their immense wealth to shape the political paradigm. The only way to get them to accept this exploitative, oppressive and intrinsically unjust system as normal would be to propagandize them.

And that’s precisely what is happening. That’s the only reason our world is ordered in the way that it is.

Propaganda is the single most overlooked and under-emphasized aspect of our society, bar none. It’s so pervasive that most of us don’t even notice it, like that old joke about the two fish who are asked “How’s the water?” and then turn to each other and say “What’s water?”

Vast fortunes are poured into buying up media outlets, paying media bribes in the form of advertising, funding think tanks, manipulating online algorithms, buying the loyalty of influential politicians, and other forms of narrative control. Immense resources are dumped year after year after year into manipulating the way the majority of people think, act, and vote, and yet hardly anyone ever talks about this extremely important fact.

Seriously, think about that for a second. How often do you hear your average citizens discussing the fact that billionaires own the mass media which is consistently used to manufacture consent for the agendas of the plutocratic class, compared to how often you’ll hear them talking about, say, the next presidential election? Even among the well-read and relatively aware people you know, how often do you hear them discussing the fact that public perception is being continually manipulated against the interests of the public? Probably not too frequently compared to other issues.

Even among leftists (by which I mean anti-imperialist socialists) this is a severely under-discussed issue, when it should be the most discussed, because leftist agendas will necessarily be incapable of advancing as long as the majority of the working class are being manipulated at mass scale into consenting to the agendas of plutocrats and warmongers. All socialists and anti-imperialists worth their salt are at least somewhat aware of the fact that the mass media are propaganda operations, but directly discussing this absolutely foundational problem occupies only a very small slice of overall leftist discourse. This will necessarily have to change if there is to be any meaningful leftward movement in our society.

“The idea that China or Russia pose a threat to you is so self-evidently ridiculous, so transparently absurd, that the only way to make you believe it would be to propagandize you. And if you do believe it, that’s exactly what has happened.”

Until fighting the empire’s propaganda engine becomes the agenda the left focuses the bulk of its energy on, none of its other agendas will ever come to pass. People will never rise up and revolt as long as they are being successfully propagandized not to. They won’t even vote for anyone with sufficient numbers if their words diverge too sharply from the consensus worldview they’ve been manipulated into espousing as true. It doesn’t seem to matter how badly the people’s material conditions deteriorate, because they can always be manipulated into blaming someone else and consenting to the status quo anyway. 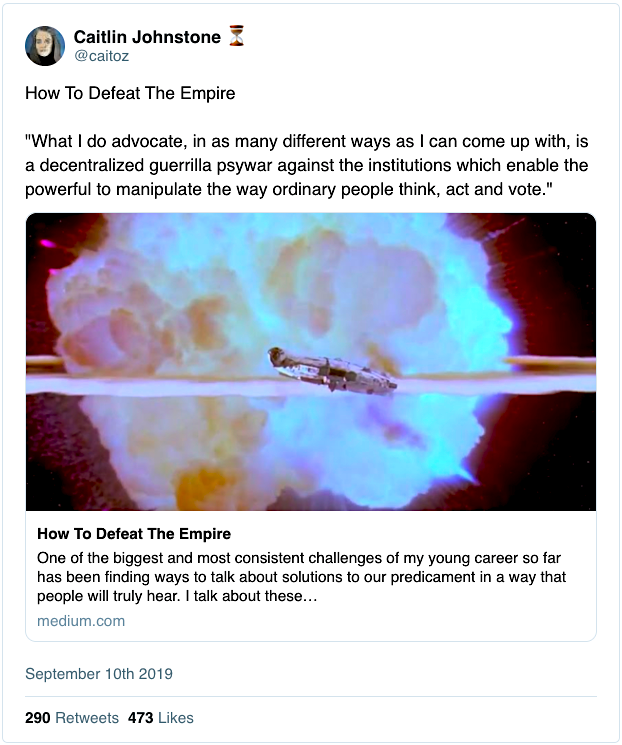 How do we do this? We just do it. We begin focusing our efforts, for the first time ever, on drawing public attention to the fact that the mass media have been deceiving them. For the first time ever, we begin in sufficient numbers to prioritize above all else the disruption of public trust in the plutocratic media and the imperial narrative management scams which keep everyone from clearly seeing what’s wrong with the world. We seize control of the narrative.

This has never been tried before. Whenever I bring up prioritizing a grassroots media rebellion I’ll get a few leftists telling me “We’re already doing that!” No you’re not. You’ve never come anywhere close. At no time in the information age has killing trust in imperial propaganda been the foremost priority of western leftists. At no time has it ever been our collective priority to use our newfound ability to network and share information to weaken public trust in the mass media and tell the public the truth about economic injustice and the kleptocratic depravity that is western imperialism. Our energy has been spread all over a variety of issues which have nothing to do with this far more crucial one.

16 comments for “Countering the Establishment’s Message”