Ben Norton reports on the State Department’s ire at  “foreign agent” legislation that made a U.S.-funded, right-wing foundation decide to close. 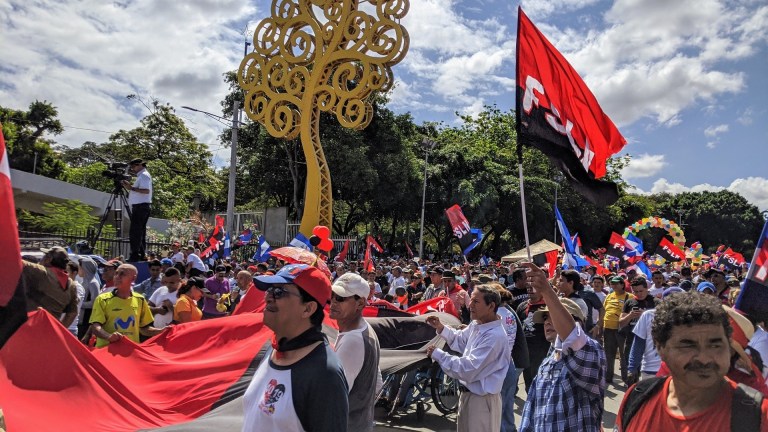 Sandinistas at a peace rally in Managua, Nicaragua, Feb. 1, 2020. (Ben Norton, The Grayzone)

Since Nicaragua’s socialist Sandinista Front returned to power through democratic elections in 2006, the United States government has poured many millions of dollars into right-wing opposition groups in the Central American country.

These U.S.-funded NGOs have aimed to destabilize the government of Nicaraguan President Daniel Ortega, and played a central role in a brutally violent coup attempt in 2018.

Nicaragua’s National Assembly responded to the Washington-sponsored violence and destabilization efforts by passing a law in October 2020 that requires organizations funded by outside governments to register as foreign agents.

The legislation is very similar to a law passed by the United States in 1938 known as the Foreign Agents Registration Act (FARA). In recent years, Washington has exploited FARA to force Russian and Chinese media outlets and journalists working in the United States to register as foreign agents — in a bipartisan, Cold War-style political escalation against both countries.

Though Washington has had this legislation on the books for more than eight decades, and still utilizes it regularly, the Joe Biden administration has lashed out at Nicaragua for its decision to pass a similar law. 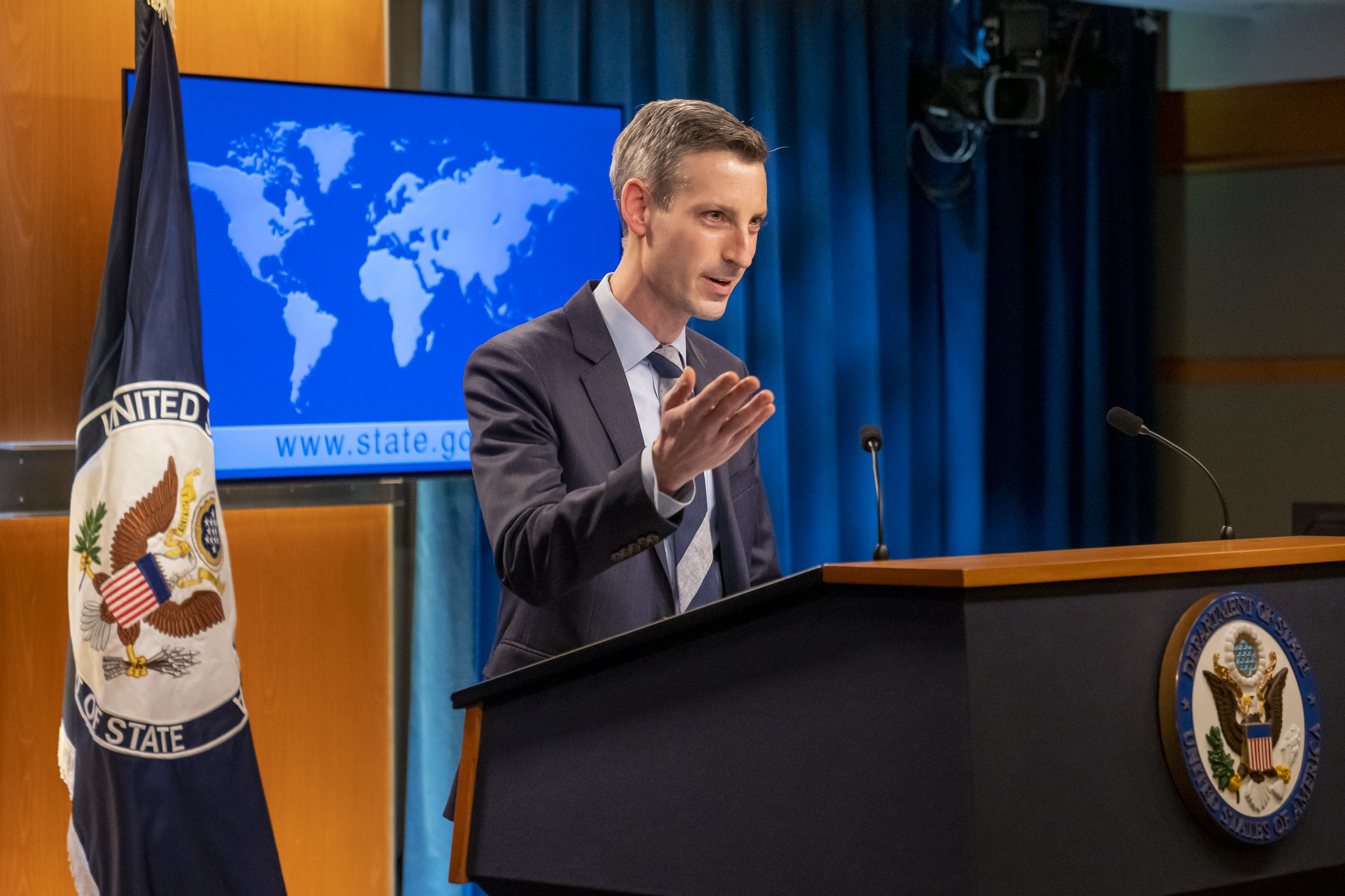 Price claimed that President “Ortega is driving Nicaragua toward dictatorship,” because the new foreign agent law led to the voluntary suspension of operations of a major U.S. government-funded opposition organization in the country.

Price demonized Nicaragua’s democratically elected government as a “regime,” while stressing that the U.S. government is “focused on empowering civil society.”

President Ortega is driving Nicaragua toward dictatorship with the foreign agents law, isolating his country and depriving his people of progress toward democracy and prosperity. We urge President Ortega to change course now. https://t.co/6UnHlVhWWL

Price’s statement condemning Nicaragua came one day after the U.S.-backed right-wing president of Haiti, Jovenel Moïse, effectively declared himself a dictator, ruling without a Senate or Chamber of Deputies, hand-picking mayors, shooting journalists, and killing protesters.

Despite the Biden administration’s hyperbolic rhetoric, it was not Ortega that passed the law; rather, it was the elected deputies of Nicaragua’s National Assembly that did so.

If the U.S. Congress approved a law, it would be very strange for a foreign government to blame the U.S. president for the legislation. But Washington reduces all of Nicaragua’s government, including its 92 assembly members and other state officials, to just one man, grossly simplifying the country’s politics.

The author of the State Department declaration, Ned Price, worked at the CIA for more than a decade, although he retired early in 2017 in protest of Donald Trump’s presidency.

The CIA has a long history of supporting right-wing opposition groups in Nicaragua. During the 1980s, the CIA armed and trained far-right death squads, known as the Contras, who waged a terrorist war on the revolutionary Sandinista government, massacring civilians, torturing officials, bombing infrastructure, mining ports, and burning down hospitals, schools, and farms.

Today, funding for anti-Sandinista NGOs comes largely through the U.S. government’s regime-change arms the U.S. Agency for International Development (U.S.AID) and the National Endowment for Democracy (NED). The latter is a CIA cut-out created by the Ronald Reagan administration at the same time when it was waging this Contra terror campaign, in order to finance similar destabilization schemes in the guise of democracy promotion.

The real source of the Biden administration’s anger over Nicaragua’s foreign agent law was the announcement that a right-wing opposition group funded with millions of U.S. government tax dollars had decided to shut down.

On Feb. 5, the anti-Sandinista activist organization the Violeta Barrios de Chamorro Foundation announced that it is voluntarily suspending operations in protest of the foreign agent law.

The U.S. State Department press release falsely accused the Nicaraguan government of closing the Chamorro Foundation. In reality, the Sandinista government was not shuttering or expelling the foundation or any other organization; rather, they voluntarily decided to cease activities to avoid compliance with the new legislation.

The Chamorro Foundation was founded by and is named after Nicaragua’s neoliberal former President Violeta Barrios de Chamorro, who came to power in 1990 thanks to a U.S.-backed terror war and blockade of the country, along with funding from Washington’s National Endowment for Democracy (NED). 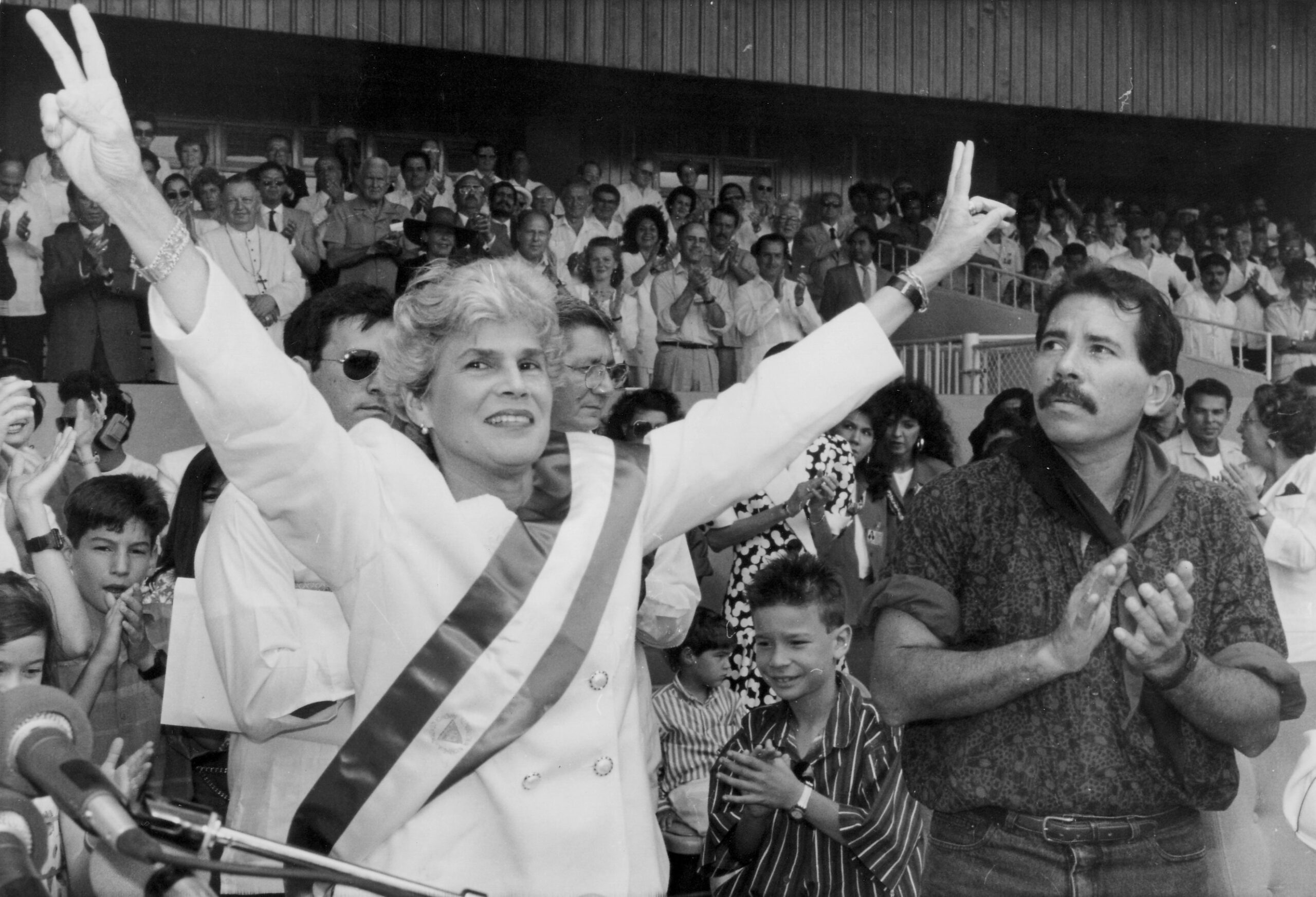 In 1991, the NED personally rewarded President Barrios de Chamorro for her loyalty to Washington, giving her a high-profile award.

The Chamorro clan is one of the wealthiest and most powerful oligarch families in Nicaragua. Many right-wing opposition leaders in the Central American nation are Chamorros, and they enjoy a close relationship with the U.S. government.

While the minimum wage in Nicaragua is just over $200 per month, USAID has poured millions of dollars into the Chamorro Foundation, allotting the following sums:

According to a review of USAID’s publicly available data, the agency has spent the following sums of money just on opposition media outlets in Nicaragua since 2011:

And this does not include many millions of dollars more that were rewarded to redacted grantees, whose information is not revealed on the USAID website. 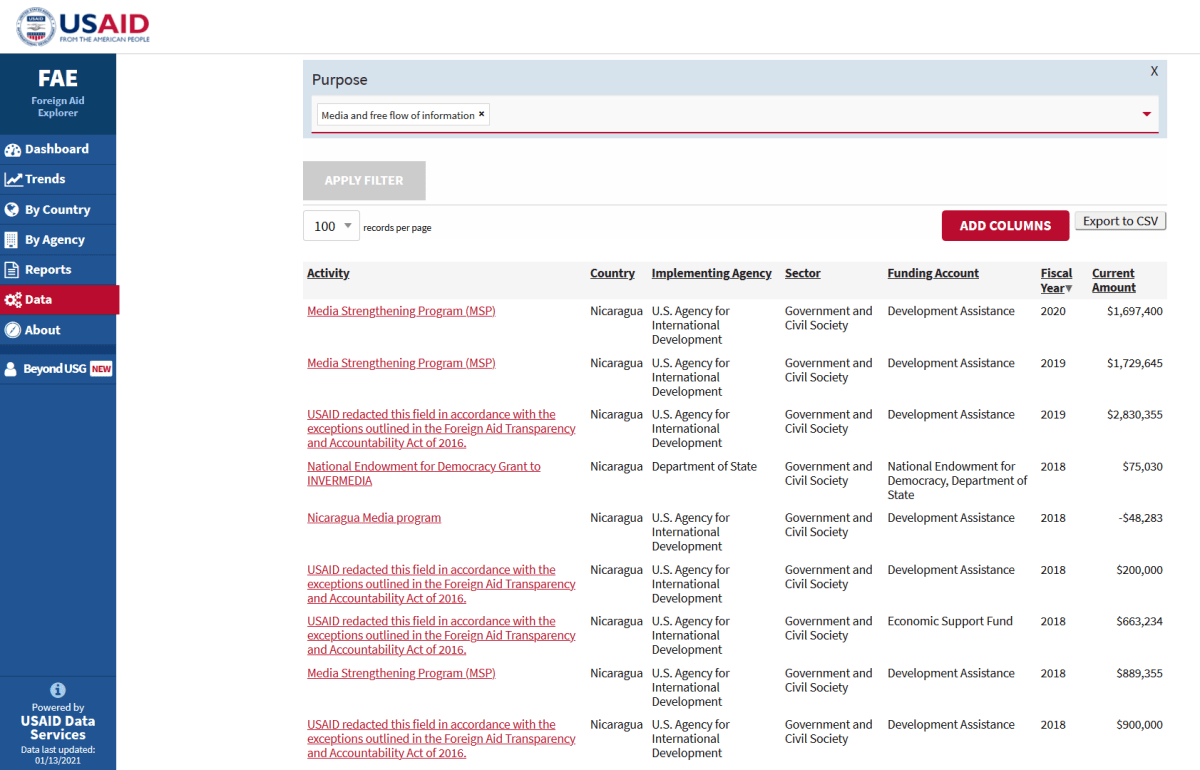 A small sample of USAID funding for opposition media outlets in Nicaragua.

One of the recipients of U.S. government funding through the Chamorro Foundation was Nicaragua’s far-right opposition media outlet 100% Noticias. This channel actively encouraged violence during the 2018 coup attempt, promoting extremists who used mortar cannons to kill and injure Sandinista activists and state security forces.

Washington-funded 100% Noticias director Miguel Mora has openly requested that the U.S. military invade his country and overthrow President Daniel Ortega, citing the war on Panama in 1989. Mora also hosted extremists who called on Nicaraguans to organize a violent mob to invade the presidential compound and lynch the elected leader.

The Violeta Barrios de Chamorro Foundation is directed by Cristiana Chamorro, a wealthy right-wing operative who will likely be the opposition’s presidential candidate in the November 2021 election. Cristiana Chamorro has also helped to run the leading conservative newspaper, La Prensa.

In effect, this means that USAID has been bankrolling the Nicaraguan right-wing’s presidential candidate and the country’s top media outlet with millions of dollars over many years.

USAID allotted more than $122 million overall on operations in Nicaragua in the five years from 2016 through 2020. The majority of that money went to “leadership, management, governance,” the “Municipal Governance Program,” and the “Democratic Leadership Development Program” – in other words, funding and cultivating right-wing opposition leaders.

While USAID claims that its projects are “humanitarian,” its own publicly available data shows that the vast majority of its spending in Nicaragua goes to funding “government and civil society” and operating expenses for its staff, while less than 1 percent of its money goes to supporting public health and agriculture.

The Grayzone has exposed USAID’s role in overseeing a regime-change operation called Responsive Assistance in Nicaragua (RAIN), which explicitly aims to overthrow the socialist government, impose neoliberal reforms that lead to a “transition to a rules-based market economy” based on the “protection of private property rights,” and purge state institutions of Sandinistas.