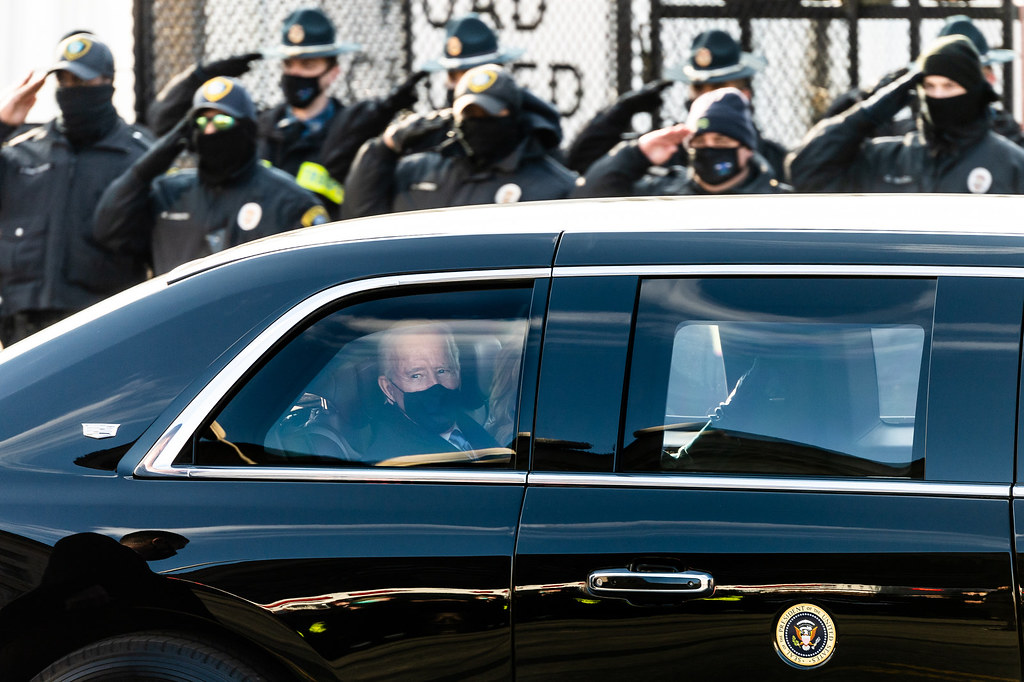 In the second month of 2021, it seems all but fated that the specter of Donald Trump — and tribal, loyalty oath-like partisan divides over his contested legacy — shall haunt and poison all discussions of each and every Biden foreign policy move for at least 47 months more. Lost in this reflexive race to familiar factional battle stations will be nearly any coherent analysis of the systemic structures designed to ensure America’s war-show must go on.

Thus, while the president’s rhetorical corrective – and vague promised policy shift – on America’s role in the Yemen catastrophe deserves a cautious (and perhaps equally vague) at-a-boy, Biden shouldn’t be the sole story here.

A sober accounting of the U.S. role in this sordid affair demands systemic-, rather than personality-driven, debate and critique. Viewing multi-administration – Obama-Trump-Biden – policy analyses through electoral season lenses is precisely what keeps the war industry cash a’ flowing, and the Yemeni babes a’ dying.

The real story of America’s unforgivable fiasco is how and why such small (for us) dirty (for Yemenis) wars-by-proxy persist through supposedly transformative presidential transitions. For these post-9/11 forever wars, their formula is the disease, and must be fought according.

Unfortunately, that means wading through wastelands of rhetorical distraction. Greasing the grotesque wheels of otherwise unexplainably obdurate U.S. support for the Saudi terror war – which, according to recent UN numbers, has left 233,000 Yemenis dead and left some 80 percent of the population reliant on humanitarian aid – is a Washingtonese dialect of linguistic-gymnastics that’s long confused We The People about what’s actually done our name.

It begins with how one defines the terms – and here, let’s say Joe’s words may conceal as much as they reveal. Biden’s bunch of “bestests and brightests” are offered an obscuring assist by an acronym- and euphemism-prone Pentagon populated with countless career “company men.”

Plus, lurking over the whole strategic needle-thread is the trumped-up threat of Iran. Only, outside of occasional heart-rending photos of distended young bellies, and too large to comprehend – yet likely underreported – death, disease, and displacement statistics, actual Yemenis rarely factor in Washington’s cruel calculus. That’s the trick – America’s professional policy-makers and -watchers speak in swirling intellectual circles until their complicit war crimes congeal as abstraction. 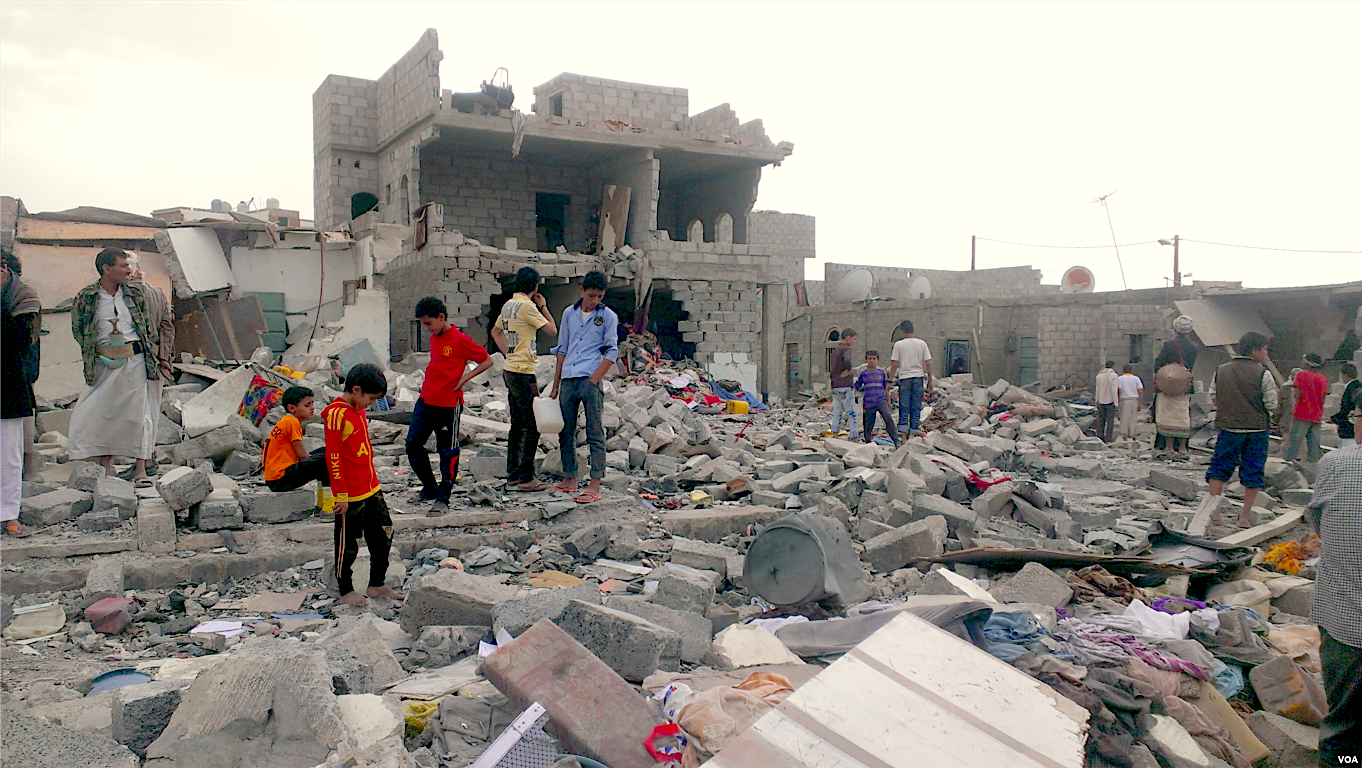 Oct. 9, 2015: Months after an airstrike, a neighborhood in Yemen’s capital city, Sanaa, remained in rubble and survivors continued to search for any valuables. (Almigdad Mojalli/VOA, Wikimedia Commons)

A cursory glance at the more common terms tossed about in Yemen war discussions demonstrates just how many unknowns and – as yet – unanswered questions linger in Biden’s declaratory wake.

Let’s start with what the president is presumably halting: U.S. support for “offensive operations.” Well, what are those – and who gets to define what constitutes offense? Even according to that glowingly-titled Intercept piece, “The Biden administration has not yet announced operational details of the move or clarified what they meant by” the term. Make no mistake: plenty that’s putrid plays out behind such cosmetic vagary.

See, specifics matter – demanding a breakdown of the macabre components and processes – a sort of how an “operation” becomes a dead Yemeni mother 101.

First, the hardware – the Saudi arsenal of atrocities. Biden promised to end “relevant arms sales,” but what exactly constitutes relevance? Well, his administration already placed a “temporary freeze” on billions of Trump-bonanza-brokered weapons deals – meaning a “review” (see what I mean about the fuzzy buzzwordian language thing?) of transfers of advanced military hardware, like air-ground munitions. Okay, but how long is temporary, and how thick is its frozen veneer? In my limited experience, bureaucratic reviews are made of far less-stern stuff than permafrost. 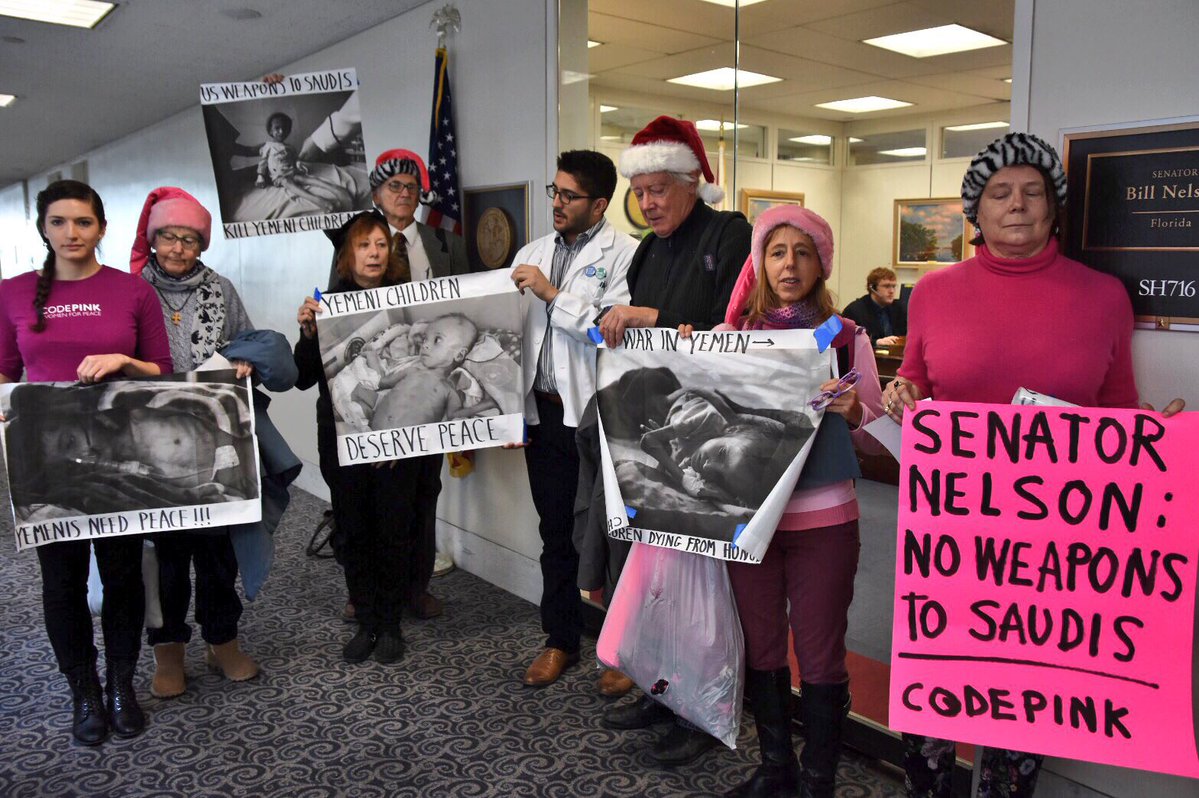 And what about all those F-35 fighter jet and Reaper drone-sweetened bribes to the United Arab Emirates (UAE) – ensuring their Palestinian-sellout of diplomatic “normalization” with Trump’s chum King Bibi Netanyahu of Israel? Naturally, the junior Emirati partners in the great Gulf criminal conspiracy of 2015 will spy a loophole, since they technically drew down most of their forces in Yemen back in 2019 — despite remaining involved through local partners and proxies.

Of course, the U.S. has always peddled as many “beans” as “bullets” to their criminal compatriot death-dealers in the Kingdom. For example, even if America’s sexier support — like in-flight refueling (which Trump shut off in 2018), intelligence assistance, and gun-running — stopped immediately, there’s still plenty of seemingly more mundane institutional abettance propping up the Saudi’s monstrous machine. 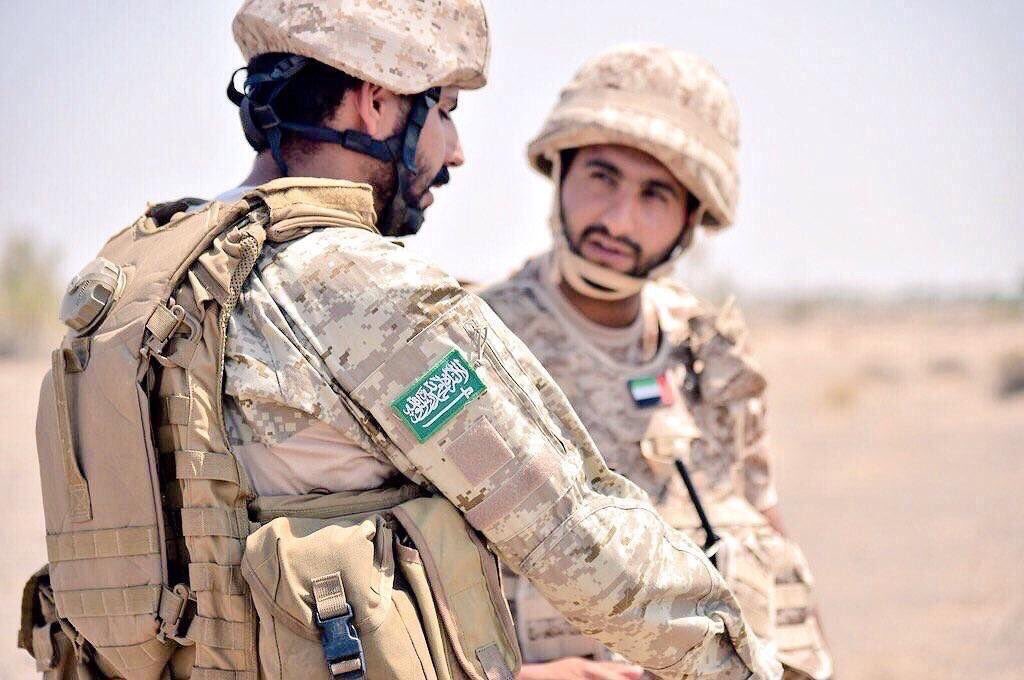 This consists of both long-term structural and nuts and bolts maintenance support that keeps the theocratic gears turning in America’s favorite absolute monarchy. Think on it: can U.S. sustenance really be said to cease if Pentagon — and their private-sector subcontractor — personnel still initially train and continually advise (outside of the Yemeni campaign) the Saudi officers commanding missions, the Saudi specialists selecting targets, the Saudi pilots dropping ample American ordinance on Yemeni kids, and the Saudi geek squad of tech-experts greasing the grotesque wheels of war?

Speaking of those plum private security contractors — we need to talk about American mercenaries. See, it’s rarely reported — conveniently — that the U.S. sends espionage and militant mercenaries to assist the Gulf Cooperation Council (GCC) countries. Other security and logistical hired guns – like the boys at Booz-Allen Hamilton — aid the Royal Saudi Navy’s starvation-inducing blockade of the Yemeni coastline.

And that’s the real rub: the almost invisible Saudi blockade has always caused more Yemeni suffering and fatalities than the brutal bombing. Only it turns out that slow-deaths are less attention-grabbing — if more grueling.

Ultimately, the blockade’s the thing — as a Saudi Shakespeare should surmise — and until Biden’s squad articulates its applicability in their new way, it’s impossible to determine the decisiveness of this purported policy pivot. 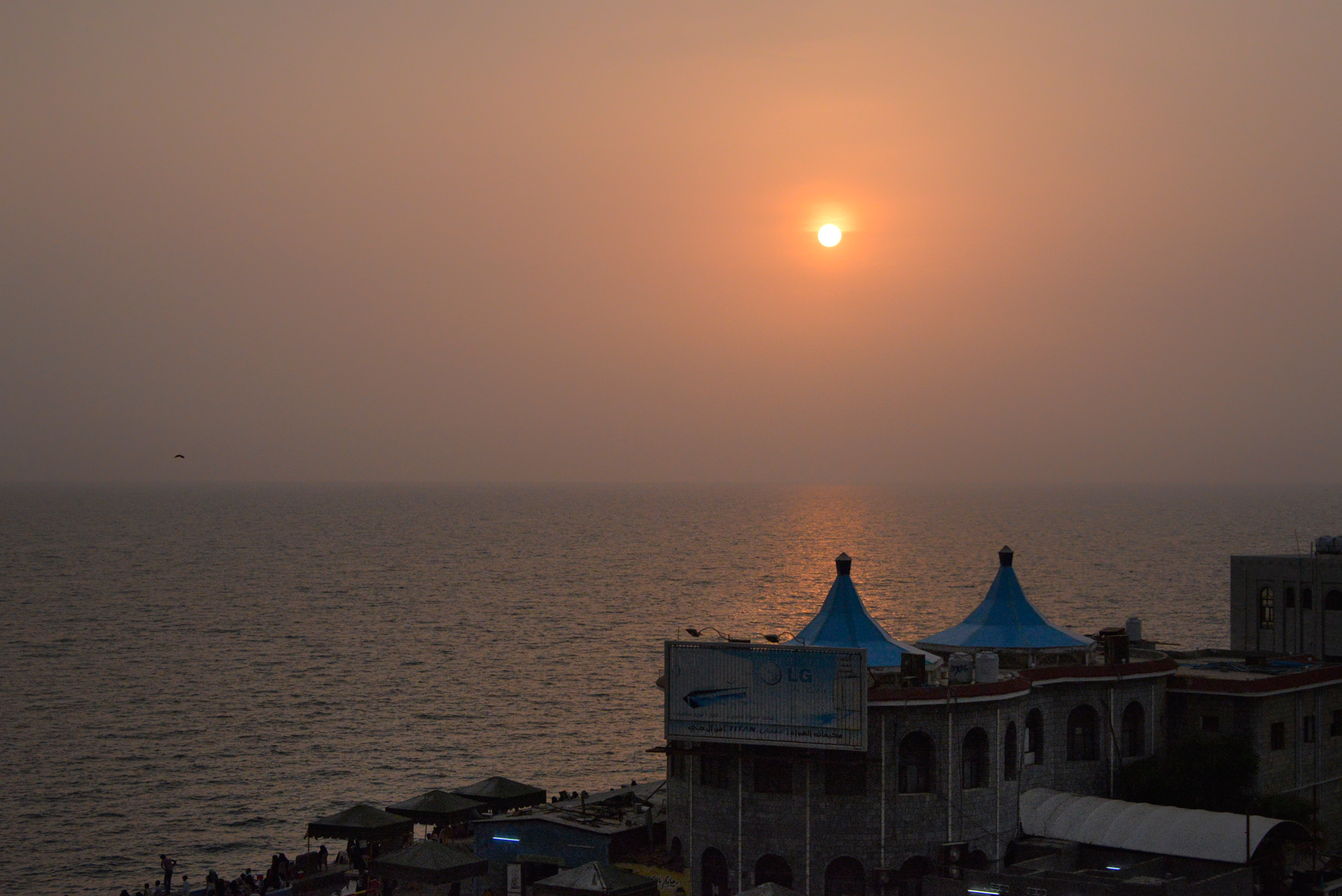 Furthermore, in his speech, Biden suggested a susceptibility to standard Saudi arguments — peddled by those oh-so-practiced players in Washington’s language-stretching game. For seasons after season, they’ve been scoring Riyadh immense benefits in dollars, operational assistance and diplomatic top-cover. No matter, in one hell of hedge, Joe still pledged to “help Saudi Arabia defend its sovereignty and its territorial integrity.” By that he mainly means Houthi-rebel missile attacks on Riyadh’s oil refineries — opening the door to loopholes tailor-made for the Saudi line.

Forget that we started the war back in 2015, and that we’ve actually aggressively intervened in Yemen for decades – if not centuries – to render the Arab world’s poorest state a neocolonial satellite. Focus on the blowback of resultant Houthi-responsive attacks on Saudi turf – and exaggerate the late and limited Iranian support role in them (to really up the alarmist ante) – then use extortive fear-mongering to warn of an existential threat to our allies’ global oil supply. Presto, I-told-you-so! You see: the war was waged in self-defense all along (Psst! Ignore that minor matter of us creating all the conditions, and essentially asking for, those very same Houthi attacks…)

And remember: sometimes the Saudis gain when the U.S. simply does nothing — even amidst rare periods of public rhetorical rebukes. This can often constitute a wink-nod handshake that kicks off a cynically choreographed dance so deft it’s difficult to know which partner’s actually been leading.

Look, none of this is to say that Biden’s speech and — even if imprecise — policy pronouncements aren’t preferable to Trump’s coarse gleeful-enabler, and boastful blank check arms-sale-bonanza bit.

But improved language – however admirable — often masks much more stable, status quo, indecency. In other words, the sort that doesn’t much make the headlines — or transpires between the rare times Yemen does appear in print.

Unlike Donald the veto-happy, Joe certainly has an opportunity to flex his highly-hyped collegial senator muscles and capitalize on an issue that’s had a brief bout of bipartisanship — with many libertarian-minded Republicans joining progressive Democrats in opposition to the Saudi [war] crime against the Yemeni people.

Of course, given Biden’s own squishy foreign policy record — along with inevitable war industry lobbyist, Israel/Gulf State, and Iranophobe counter-pressure — that’s a big if. But if Joe genuinely wanted to makes some moves in his adopted town, here’s a radical thought for a crisis demanding radical action: try some responsibility and reflection. Dream with me, and imagine the precise language Biden could bring to bear:

“First off, let me offer what must – to the countless victims and grieving loved ones – seem a paltry apology indeed. But I offer it sincerely – for my own previous, and my embarrassed country’s, complicity in what may prove the most lasting stain on America’s moral and global reputation amidst our two decades-worth of post-9/11 madness.

Furthermore, I wish to address the leadership of the Saudi Kingdom: As of this moment, you are cut off completely – and on your own – until you quit bombing babies and beheading women for witchcraft. Oh, and if you think you can get a better deal from Putin or Xi? Be my guest…

P.S.: we’re also pursuing full normalization with your Iranian nemeses – deal with it.

8 comments for “Biden’s Bolt From Yemen: Not So Fast”