Vik Sohonie reflects on citizenship apartheid and the case of the American “digital nomad” deported from Bali. 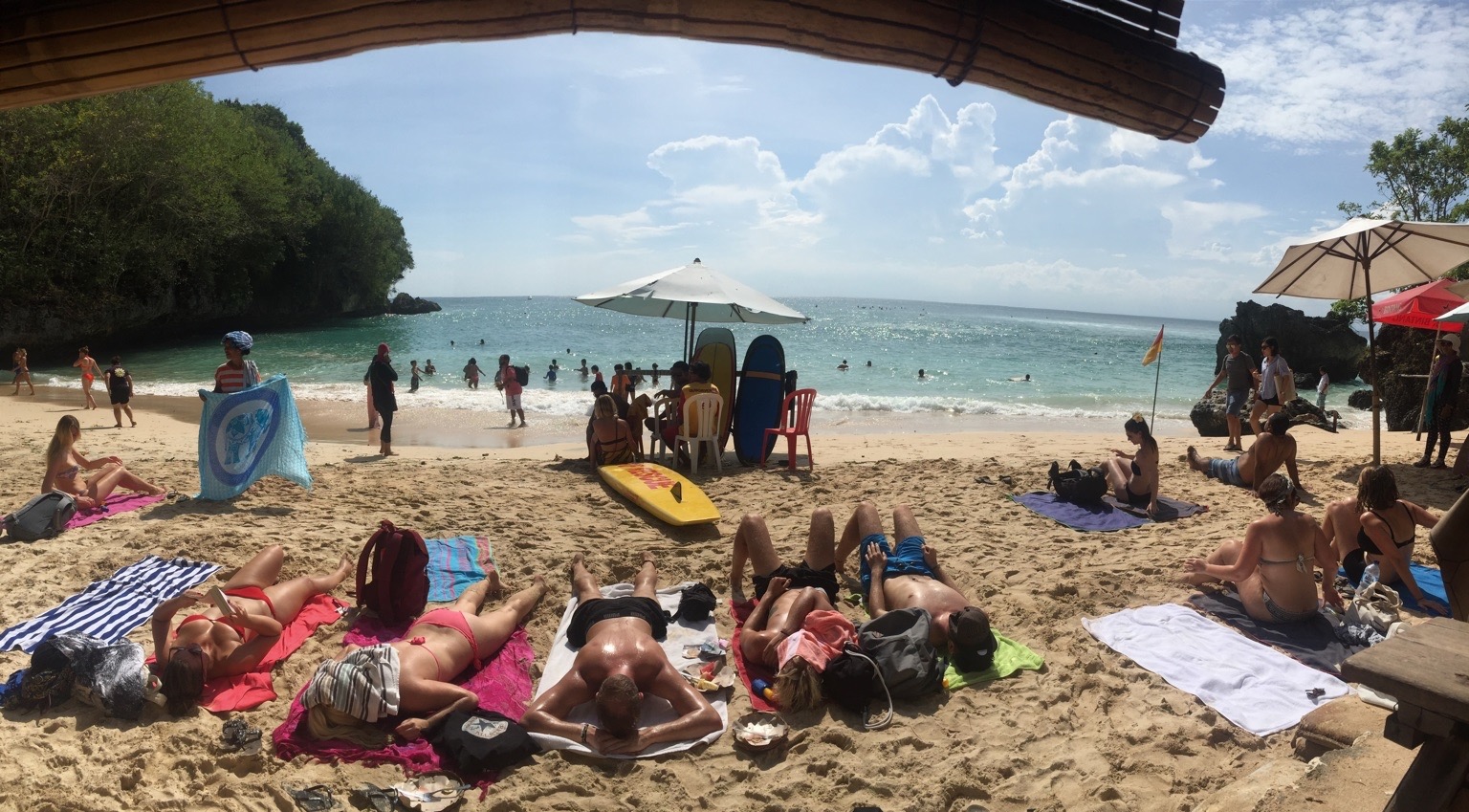 By Vik Sohonie
Africa is a Country

“The thing you always suspected about yourself the minute you became a tourist is true,” Antiguan writer Jamaica Kincaid declares in A Small Place, “a tourist is an ugly human being.” She may have been writing about Bali, Indonesia.

A young Black woman from the U.S., Kristen Gray, moved to Bali amid a deadly pandemic ravaging Indonesia. She posted a Twitter thread — her account is now disabled — extolling the virtues of migrating to Southeast Asia.

Her wide-eyed assertions are not uncommon to anyone from the region who has seen it marketed to Westerners and the globally mobile. She boasted of her “elevated” and “luxury” lifestyle in Bali, where the cost of living is big value for her dollars but less for anyone earning Rupiah. She found solace in Bali’s safety and the Black in Bali community.

Gray has since been deported.

Leaving the U.S. in her 20s was “a game changer,” a common refrain of Black Americans who find more peaceful, less traumatic existences elsewhere, even in booming East Asia, where the fear of being gunned down by police officers is non-existent, the daily state of rage that drains one’s soul in Western societies arises far less frequently, and opportunities are abundant. With her girlfriend, they booked “one way flights to Bali.”

Reactions from all corners of Twitter were strong and swift. Her advertised actions revived animus and unleashed restrained thoughts, a feature of our age, that went far beyond a toxic social media platform’s daily roast.

Some called her out for allegedly violating immigration laws, not having proper work and tax permits, entering the country during a pandemic, and encouraging others to do the same via Indonesian visa agents. Some Indonesians, along with my circles in Southeast Asia, were stunned at the dragging.

The sixth-most unequal country in the world, Indonesia suffers many indignities, but it, and The Association of Southeast Asian Nations (ASEAN), are also not helpless children. While the West has devoured itself over the last three decades, Southeast Asia has quietly transformed its economies at an enviable pace. The lingering Cold War Western idea of our corner of the world as a cheap, malarial mega dump, a “third world shit hole,” was always trite and now ever more at odds with reality.

Some rushed to her defense, citing anti-Blackness in the accusations. They noted the number of white Westerners who regularly ignore a raging pandemic and continue their travels, let alone the sheer number who have migrated, both legally and illegally, to Southeast Asia with no backlash.

Europeans and Americans traveled widely during winter with the pandemic at its deadliest peak. Tens of thousands sauntered into Dubai and the Maldives. Londoners fleeing Tier 5 lockdowns were among the crowds. 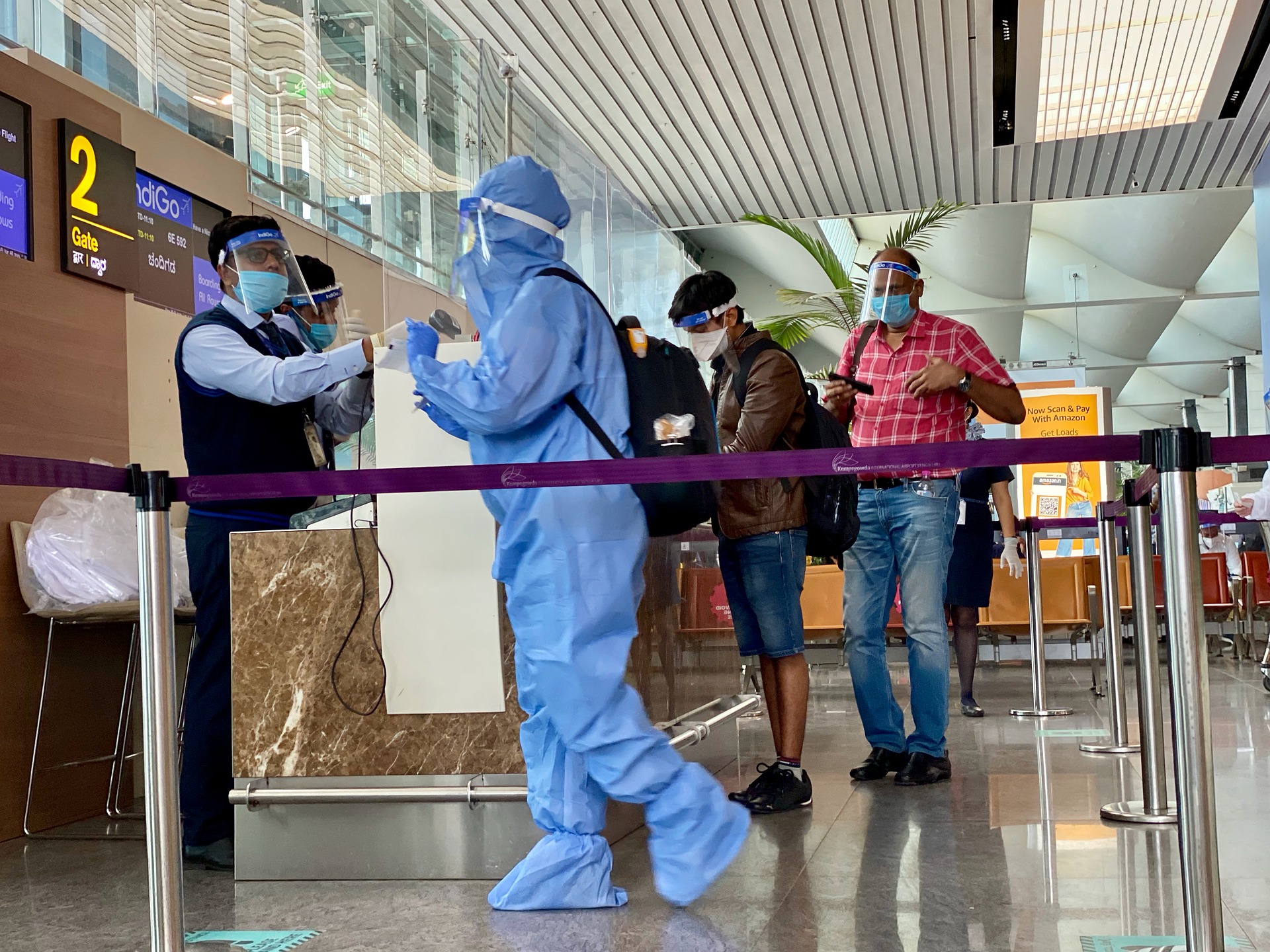 Their vacations or new homes were not splashed on Twitter, but visually friendly Tik Tok and Instagram were swollen with egregious displays of carelessness and entitlement. Almost 70,000 Israelis ditched their national lockdown to party in the Emirates. If the argument is exploitation, there are few destinations where cheap labor is screwed over more than Dubai or the Maldives. “White people get Eat/Pray/Love if they travel,” Sri Lankan writer Indi Samarajiva tweeted, “the Global South gets Beat/Detain/Hate.” Gray is not of the South, but you get his point.

Some on the left had little sympathy. No one raised in the U.S., they argued, is immune from internalizing the pathologies of imperial thought, of seeing inequity as a natural order to be exploited at every turn. The ill-fated proselytizing mission of John Chau, an Asian-American killed trying to convert the isolated Sentinelese people of India’s Andaman Islands, underscores this theory. The world is also without doubt different for a Black traveler carrying a “white” passport, the type that swats borders away like an unwelcome odor, than one carrying an African passport, which confers a lifetime of mistreatment.

But it is also imperial to impose one’s understanding of the world, notions of history, and moral code onto a society and people half a world away. Many became Indonesian experts overnight. “A triple minority in the US,” read one tweet, “but you’re a colonizer in Bali.”

Some tweets read like U.S. State Department press releases. Gentrification was the word of the hour. Such assertions bemuse because they are pulled from the bowels of an Atlantic-centric worldview — or worse, Brooklyn-centrism — which has scant understanding of East Asia and would struggle to name a single Southeast Asian thinker or writer. The vast span of islands, an infinitely complex bundle of nations masquerading as a young country of 270 million called the Republic of Indonesia, where languages change between cities an hour apart, must, like all countries, be understood on its own terms. Bali is not in any way West Papua.

Some would be wise to sit this one out, namely expats in Southeast Asia. One editor living in Vietnam tweeted that his “main question” was her use of African-American vernacular: “what does ‘stack bread’ mean?” he asked, claiming curiosity. An Australian Twitter personality lectured her followers on how “minorities can still be oppressors.”

Their, um, anxieties speak to a larger changing dynamic in travel, particularly in Southeast Asia. Never mind that many in the Western club entered the region using similar tactics. It’s their reminder that global mobility and the opportunity to settle overseas is built for them, and them alone.

They are today the East Asian Raj, a select group of successful, morally charged Westerners who stand on a high pedestal in their welcoming Asian homes, barking at their subjects about everything from human rights to corruption to apparently who “oppressors” can be. The loud Raj, drunk off the cheap wine of Western exceptionalism, is, of course, a feature of life in more than the former colony. The Raj is Southeast Asia’s nouveau settlers, not Gray.

This comes from a loss of exclusivity. In my childhood, the beaches of Thailand and the Philippines were entirely the domain of white Western tourists. White folks were so visible in Southeast Asia that, as a child, I believed them to be the largest population of people. Today, they are the minority of travelers. Russians, for instance, were the only non-Asians in the top 10 visitors to Thailand in 2019. Times have changed. Money and power lie elsewhere. 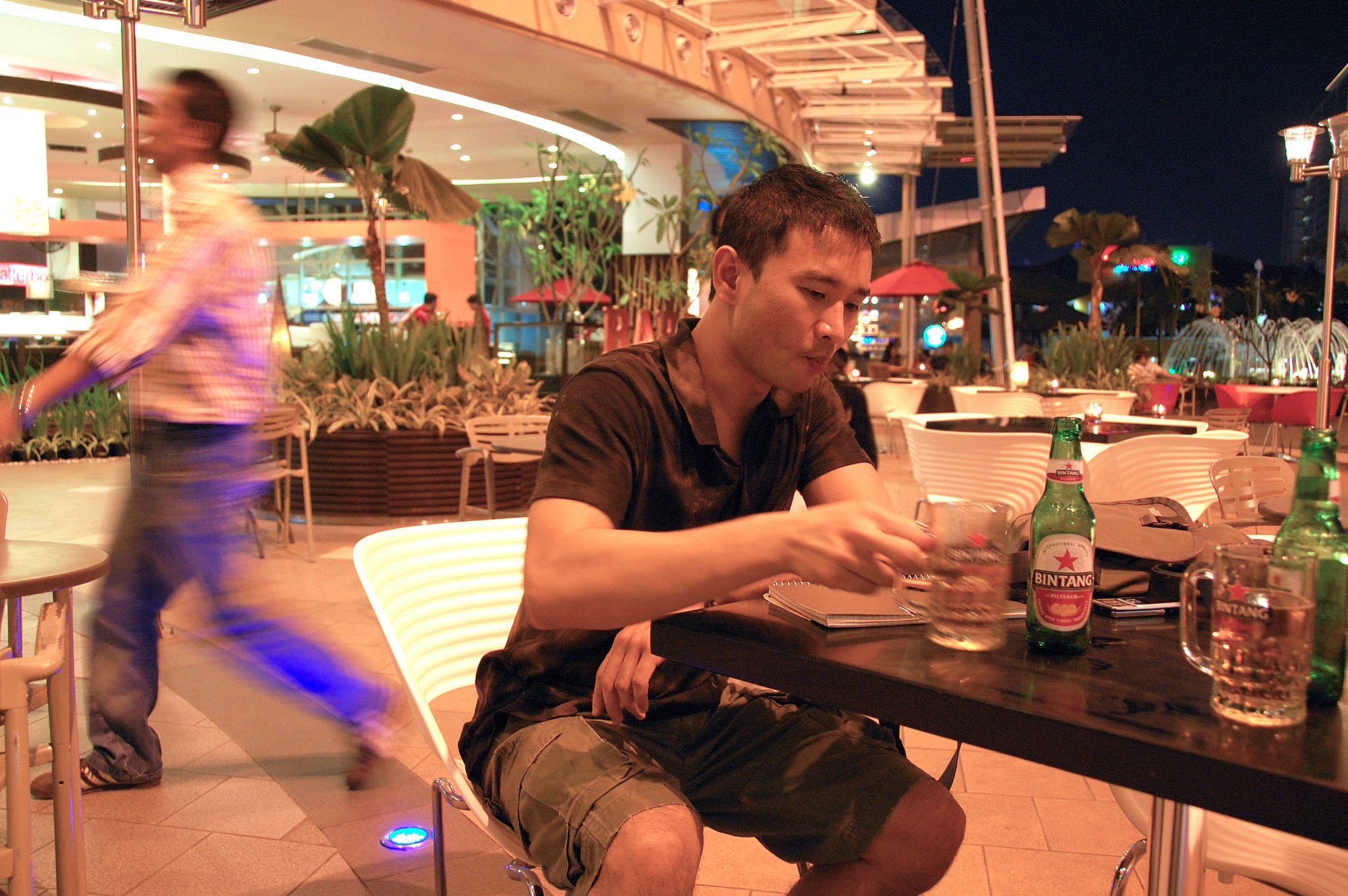 When some East African economies developed a healthy middle class, they flocked to Thailand and the malls and bars welcomed Kenyans and Ethiopians. Prior to the pandemic, the African neighborhood in Bangkok was more bustling than ever. Ethiopian restaurants opened in numbers, with one named Fidel. More Black Americans stroll my neighborhood than ever before. But districts with Black faces, not British and Australian pubs, are also the perennial target of immigration raids.

Ultimately, at the very core of an incoherent discourse, is still a total lack of reckoning with the most powerful currency in our world. A one-way flight is available to such a tiny minority of nationalities, it immediately triggers outrage. Not a single Indonesian citizen could dream of booking a one-way flight to become a digital nomad in Australia, North America or the EU. Right-wing politicians and news media in the West would have a field day if one Indonesian even tried. For Gray to do so during a pandemic only confirms that the apartheid of citizenship supersedes any other identifier one may carry.

Privileges, opportunities, and discrimination ascribed to citizenship is so normalized it contradicts every single liberal value preached by Western leaders and pundits. Would we ever stand for a travel system that explicitly discriminates based on skin color, gender, or sexual orientation? Yet segregation based on citizenship is wholly accepted. Would Europe’s liberal bastion, the Netherlands, which has one immigration line for the passports of wealthy, mostly Western, countries and one for the wretched rest of us at Schipol Airport, ever create two separate lanes based on race?

“The dilemma,” wrote citizenship scholar Dimitry Kochenov in a study, “is thus quite a simple one: either we practice our ideals of human dignity and equal human worth — or we practice citizenship.” 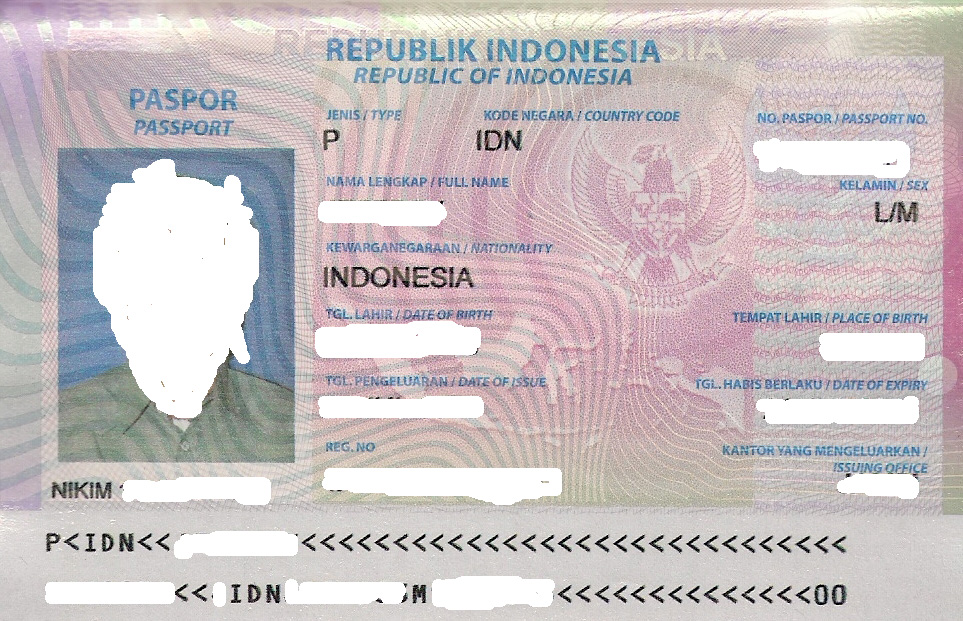 Everyone on the wrong side of global citizenship apartheid has had enough. Consider my viral tweet of Thailand’s now rescinded pandemic travel requirements for European tourists, which demanded a minimum balance of 15,000 euros for six months, a hurdle many of us are all too accustomed to even apply to visit, and for some simply transit through Europe. Holders of unworthy passports — the vast majority of humanity — applauded Thailand’s decision loudly, demanding their own countries take a similar stand. Many reacting in glee were Indonesians. Outrage at Gray’s callous disregard for the untold powers of a U.S. passport is merely another salvo against a despised and unsustainable system of global movement during an opportune moment to radically reform our economies.

But ours remains an open place. We welcome many, an integral part of our ancient Vedic ways. That openness was once structurally reserved for one class of people. Today, Southeast Asia, with its historic ties to Black America and Africa, especially Indonesia, where Afro-Asian unity was cemented in Bandung, has a duty to remain open for Black people worldwide. Our gates should firmly welcome Black Americans seeking escape from a country with rampaging white supremacists. That everyone must respect the law goes without saying. But precedence demands that one of the very few Black women travelers in the region should be allowed to err once without vast condemnation or harsh legal recourse.

I’ve known enough European men arrested and deported for repeated transgressions only to re-enter not long after on the same passport with their records essentially wiped clean. Resentment should be channeled against the 21st century’s apartheid of citizenship that millions before Gray have abused without cognizance or remorse.

Those who live under apartheid in their own societies finally making use of the privileges their papers afford them should be a welcome development. Doing so with wholesome responsibility is the logical next step. Young women of European descent have paraded their lifestyles on the beaches, islands, and rooftop infinity pools of Southeast Asia since social media became a thing. A 20-something Black woman doing the same, while in poor taste, does not deserve anything more than others have received.

Comedian Paul Mooney once said in a live stand up I attended in New York City that the “most disrespected person in America is a Black woman.” Southeast Asia is not America. Gray would be wise to heed Jamaica Kincaid’s lessons, recognize the ugliness of a tourist, and abandon emulating those who traveled before her. And if it wants to propel its relentless development, Southeast Asia must guarantee its shores always ferry distressed vessels to safety. If she ever returns, my home will always be open.

Vik Sohonie is the founder Ostinato Records, a Grammy-nominated label focusing on music from Africa’s past.

3 comments for “A Black Traveler Carrying a ‘White’ Passport”