The organizers of the Trump rally on Jan. 6 had no permit for a march to the Capitol and tried to warn the White House that it would be illegal, reports Greg Palast for Consortium News. 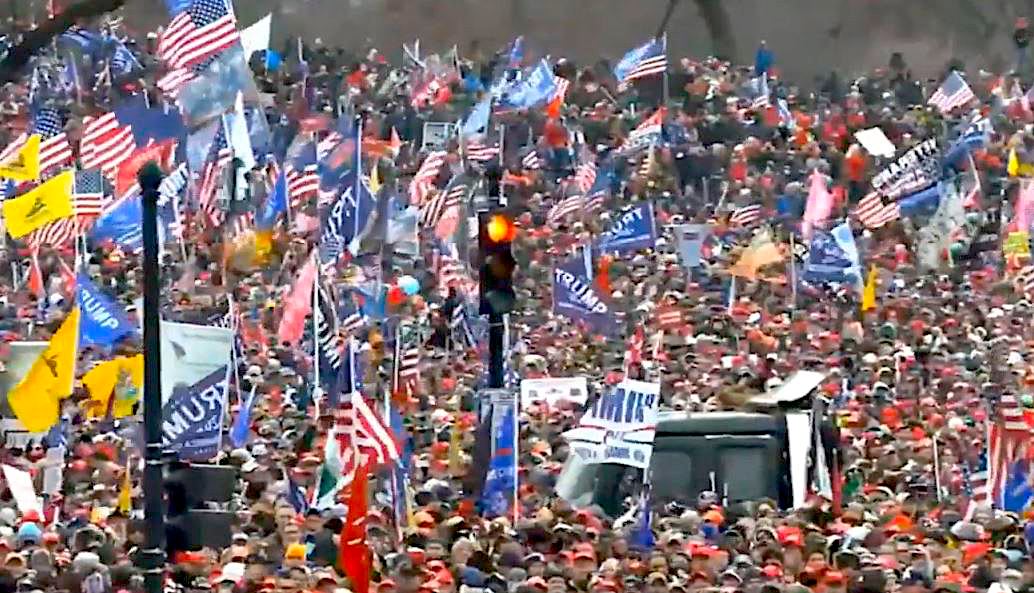 Before Donald Trump exhorted the Jan. 6 rally to march on the Capitol, the White House had been warned by the rally sponsor that there was no permit for a march, that the Interior Department’s Park Police were promised there would be no march, and that such an unplanned march was dangerous.

As a result, the police were stunned, undermanned and unprepared for Trump’s surprise launch of thousands of his enraged Trump supporters, some armed, on the Capitol.

“I mean, it was shocking. It’s something we advocated against doing for exactly the reasons that ended up playing themselves out,” said a high-level source inside Women for America First, the organization that held the Interior Department permit for the rally. They spoke to this reporter on condition of anonymity.

Even more damning, the march Trump set in motion was led and promoted by ultra-right, violence-threatening extremist Ali Alexander, head of Stop the Steal. The Palast Investigative Team filmed Alexander, only weeks before the riot, exhorting a crowd:

“Either they take Trump …[or] we’ll light the whole shit on fire!”

The White House had been warned about Alexander and his dangerous plan to move on the Capitol. The leaders of Woman for America First sent several frantic, angry text messages to the White House warning that such a march was both illegal and dangerous. “When Ali was putting up things about the Capitol on the sixth, [we were] screen-shotting that, sending it to people both at Parks and at the White House, a couple of times, like ‘WTF’!,”a organizer source said.

he rally reads, “Did you see that Ali’s website says we are marching at 1.” The reply: “We’ve just had to up our numbers with the NPS [National Park Service] and we can’t say anyone is marching.”

It is impossible to confirm the authenticity of the texts, which could be self-serving creations after the fact. However, Women for America First founders Amy and Kylie Jane Kremer, who have had a well-reported feud with Alexander and Alex Jones, the far-right radio host with whom Alexander had teamed to lead the march. 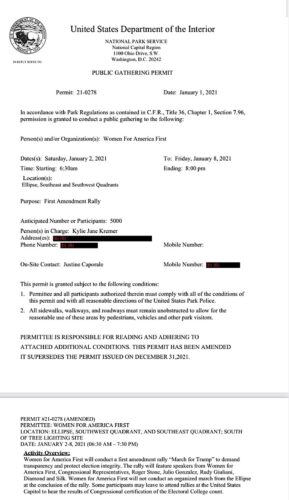 It is credible that the Kremers would have tried to prevent their sworn enemy from using their rally to launch a march which would leave the group on the hook for violation of their permit.

The permit issued by the U.S. Interior Department, which has jurisdiction over federal parkland, says: “Women for America First will not conduct an organized march from the Ellipse at the conclusion of the rally.”  It adds, “Some participants may leave to attend rallies at the United States Capitol to hear results of Congressional certification of the Electoral College count.”  But an “organized march” was not allowed.

The DC Metropolitan police told Consortium News that to learn if it granted a permit for a march on Washington’s streets it would have to file a FOIA request.

The Kremers have been feted by the president, and so has Alexander. That gave Alexander access to the front of the rally where Trump would speak.

“Ali was running amok in the VIP section–it was disgusting–saying we’re going to go to the Capitol. What the f***! We’re not doing a March to the Capitol! What a terrible idea to try to move that number of people all the way to the Capitol,” the source said.

The insider claims that Woman for America First was quite worried that they had no marshals to keep the crowd in line. “We did advocate against [the march] for all kinds of reasons. So, excuse me, it’s not a big stretch to say when you have a bunch of people heading that way, it’s going to be a problem.”

The first news that there would be, despite warnings, an illegal, uncontrolled march was at 12:15 pm when Trump himself surprised the protest organizers with his announcement. “I know that everyone here will soon be marching over to the Capitol building to peacefully and patriotically make your voices heard,” Trump said.

The march on the Capitol was set in motion when the President announced he himself would join it. “The announcement that he was going to go was news to us,” the insider said. “But then [Trump] said he’s walking! It caught our team by surprise and unprepared.” 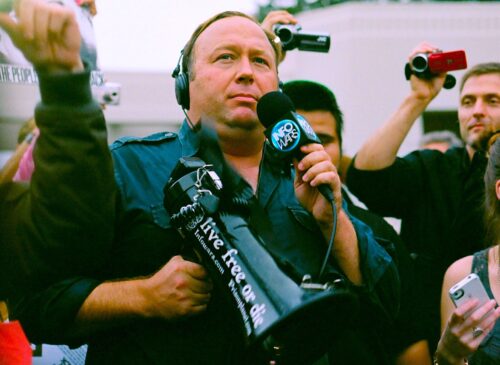 Alex Jones stated on his podcast that he and Alexander were called by the White House just before the president’s speech and were told to prepare to lead the crowd on a march.

“We had a legitimate deal with the White House,” Jones said in an InfoWars show filmed with Alexander after the riot. “‘Hey Jones and Ali,’ literally, with Alexander, we were supposed to lead a peaceful deal.”

The White House has not denied the duo’s extraordinary claim, a claim consistent with events.

Alexander has been filmed cavorting with the white power group Proud Boys and yucking it up with a Nazi displaying a giant swastika flag in an online forum. Alexander has had a well-known fan in Trump who, more than once, reportedly referenced with approval Alexander’s uncanny resemblance to the late entertainer Sammy Davis Jr.

Washington DC’s anti-Covid laws required a complex separation of the crowd into groups of no more than 50 which would have been impossible to maintain.

Attorney James Lafferty has spent decades defending protests. Reached in Los Angeles, he said if Trump had launched the march knowing it was unplanned, dangerous and led to this mayhem, that would make Trump culpable of “high crimes and misdemeanors,” that is, grounds for impeachment. Trump was impeached on Wednesday by the House of Representatives for “inciting” an “insurrection.”

“It doesn’t matter that he didn’t call for or know the details of the damage that would follow,” according to Lafferty who hosts a radio show on legal rights. “He is guilty of the consequences.” The Senate will presumably examine this issue when it tries Trump.

As Palast Investigations reported on Jan. 8, the team’s Zach D. Roberts had discovered that both the Republican Party of Georgia and the National Republican Senate Committee had sponsored Alexander to lead the GOP’s get-out-the-vote operation in suburban Atlanta in Jan. 5’s run-off for two U.S. Senate seats.

The Republican state and national officials sponsored the event promoting Alexander while he was calling for an illegal march — and weeks after our reports of Alexander’s violence-threatening screed.

The GOP officials who sponsored Alexander have not returned calls to explain their reason for teaming with the Alt-right provocateur. Neither the Kremers nor Alexander have responded to direct requests to speak. Alexander is, as of this writing, reportedly in hiding.

Investigative reporter Greg Palast and photojournalist Zach D. Roberts have covered the issues of vote suppression and right wing violence for two decades in reports for Rolling Stone, The Guardian and Democracy Now!

CORRECTION: The Interior Department granted the rally permit, not the Washington Metropolitan Police as was reported in an earlier version of this article.