Julian Assange will be back in a glass cage Monday to learn his fate, pending appeal. Nine years ago he packed numerous venues, including the Sydney Opera House on Sept. 30, 2011. CN Live! producer Cathy Vogan was there. 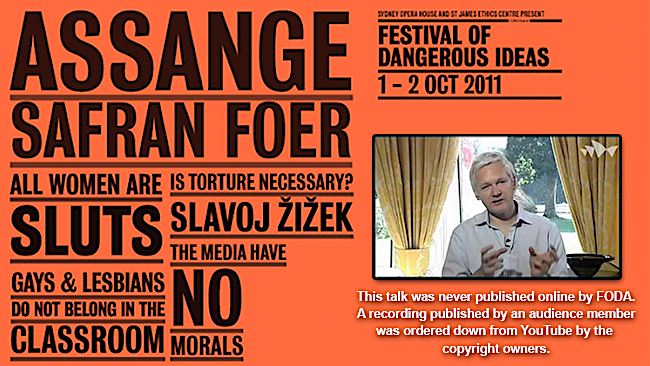 Click on image to view the only video trace available of Assange’s talk to the packed Sydney Opera House on Sept. 30, 2011.  A published audio recording has also disappeared.

As I left the Festival of Dangerous Ideas‘ satellite link-up with Julian Assange at Sydney Opera House on Sept. 30, 2011, I overheard a guy complain: “So much time wasted with irrelevant stuff… CUT TO THE CHASE!” I couldn’t resist saying: “The Opera House filtered the questions; I’ll remind you of that.” He looked surprised and then, as if the penny dropped, said: “Yeah, you’re right!”

As Assange faces judgement on Monday in the U.S. extradition case against him, vilified by many and largely ignored by the corporate media, it is instructive to look back less than a decade ago when the WikiLeaks publisher was racking up journalism awards, including a Walkley, Australia’s equivalent of the Pulitzer Prize, for the very publications he is now being charged for and was filling venues to hear him speak, including at arguably the most prestigious meeting place in all of Australia.

But even then his ideas were deemed dangerous enough by the esteemed Sydney Opera House that for the Festival of Dangerous Ideas, it was announced that the 5,000 people who would fill the hall had only 27 hours to submit questions in advance by email and the organizers would choose which ones Assange would be asked. I was lucky enough to catch the notification in time and submitted a question, but many people didn’t.

A seemingly generous 30 minutes was allotted for the Q&A.  But what became quickly evident was that the satellite transmission was running on a 7-second delay. Australian Broadcasting Corporation host Fran Kelly offered the surreal explanation to the audience that: “Ellingham Hall in Norfolk, is a very long way away… “.

The audience cheered when Assange’s name was mentioned, and cries of ‘Woohoo!” rang out when his image appeared.

Fran Kelly: So over to you……………………..
The audience laughed at the extraordinarily long (satellite) delay.

Assange: It is heartening to me to hear that kind of response in Australia. The Australian public and its support of our work is really something that keeps us going. The reaction in Washington and London is really very different, and that’s something I’d like to explore a little bit; about how different nationalities and different States have viewed our work and reacted to it.

Three hundred and ten days ago I was in Wandsworth Prison in Windsor, in London. I was placed into the basement, into the separation unit; kept away from all other prisoners, confined to myself 24 hours a day, and during that time I had a moment to reflect…

We had a whole lot of government task forces in Australia set up against us – publicly declared – involving the AFP, ASIS, ASIO, the Department of Defence and the Attorney General; looking in to whether there was any way to stop what we were doing; whether we had committed criminal offences in Australia… and that swift reaction by the Australian Government was only stopped, ONLY stopped by the Australian population and by our friends in the Australian media.

Left to its own devices, the Australian Government / the Australian Labour Cabinet would have done everything in its power to see me and other people working with me shipped off to the United States.

Assange showed us “some 270 pages released…” about Wikileaks staff by the Australian Government to the U.S. State Department before Cablegate. He said they were obtained via FOI request, but the pages were about 75 percent blacked out. 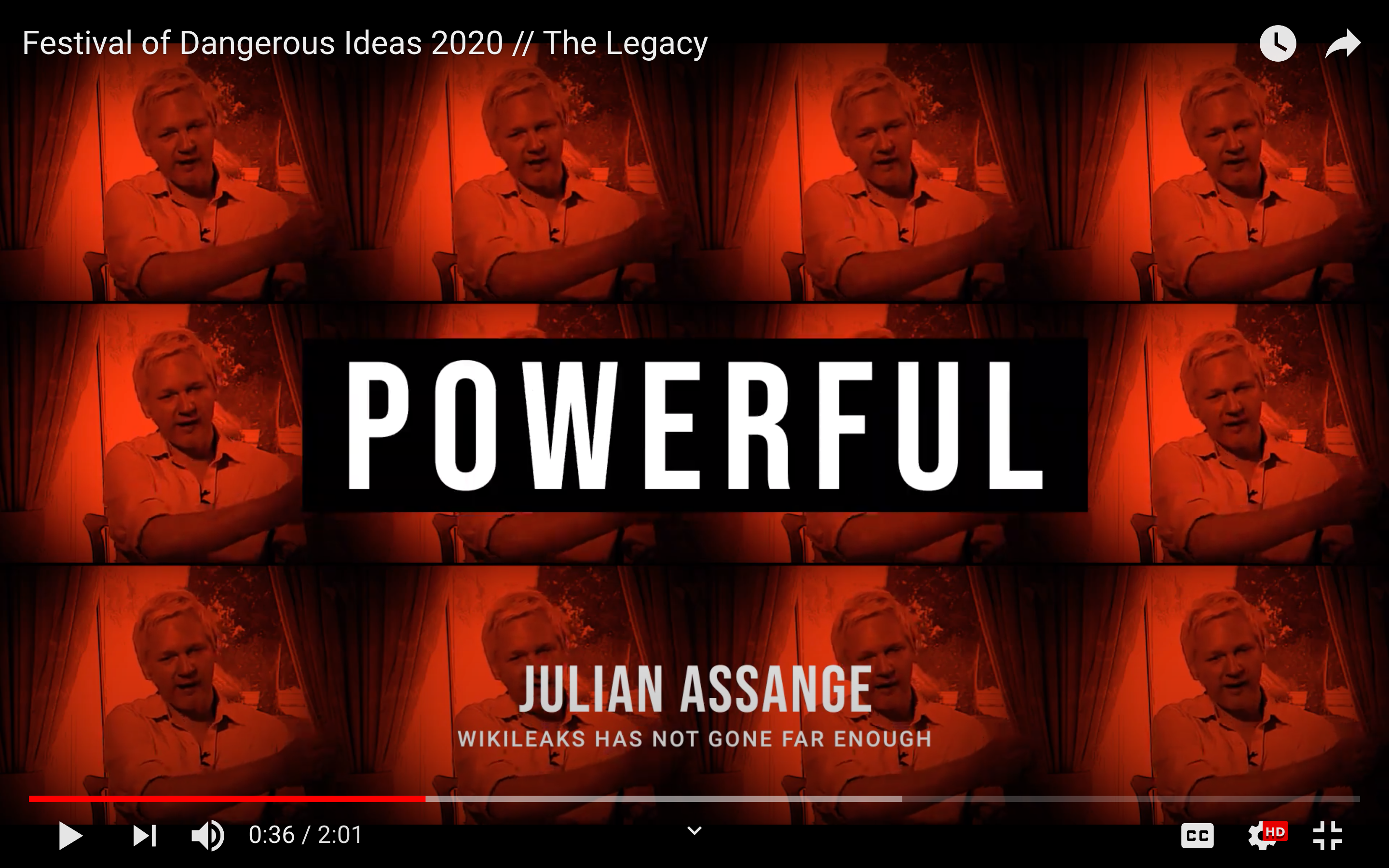 Only available image and audio of Assange’s talk to the Opera House.
(Festival of Dangerous Ideas 2011)

Assange went on to say that one percent of the American population had signed a secrecy agreement; a total of 3 million people who are not allowed to talk about what they are doing.

It is disturbing that the recording of this “dangerous” event has disappeared from public view. The organizers forbade anyone in attendance from making a video or audio recording.  One recording that made it onto YouTube was ordered taken down.

A source close to Wikileaks later said that Assange’s contract to speak at the Sydney Opera House had barred him from appearing anywhere else in Australia for months prior to the event. Only on the night would he be able to battle misinformation.

Assange told the audience that America is run by a “Shadow Government” that involves both corporate sponsorship and collaboration. He cited Paypal, Mastercard and Bank of America’s extra-judicial blockage of WikiLeaks revenue (since lifted), to the tune of about $AU 30 million, but when asked, he passed on complaining about media-orchestrated calls for his assassination.

The nexus of power of the Shadow Government, Assange asserted, exists above government and brazenly so at times, outside of the rule of law. In the U.S., he said, one can’t run for election without access to such sponsorship. He explained further how this Shadow Government extends its existence and imposes its will across many other countries – and right into our pockets in the form of a credit card. “Yikes” cried someone, breaking the silence in the house.

Assange’s speech ended on a note of optimism: the whistleblowing will continue, he said, even if Wikileaks didn’t. The capacity crowd is stirring now at the prospect of their questions being selected. ABC’s Kelly was onstage to read them out, but she began with her own rather long-winded question, which essentially portrayed Wikileaks as tragically finished.

Assange elicited laughs with his response that Wikileaks is, “A rather big boat with a lot of torpedo holes in it” which is still… “drifting along”. He used the word “Titanic” to describe governments, challenging the notion of “too big to fail.”

Kelly went on to the selected questions, asking one up front to Assange about facing the “charges” in Sweden. It was an embarrassing mistake which Assange corrected, informing her that there were no charges.

He also had to remind Kelly that the un-redacted State Department Cables had been released, and were viewable by everyone on Cryptome.org or downloadable as a torrent on the Pirate Bay before Wikileaks re-published them, which became a major issue nine years later in Assange’s extradition hearing in September. The U.S. tried to portray him as recklessly releasing the un-redacted cables with U.S. informants names, even though senior U.S. officials have said no one was harmed.

The Opera House’s selection of questions was not much appreciated by the crowd. They were too general and accusatory for this audience. The questions elicited groans and heckling. They ranged from valid to misinformed, to antagonistic to redundant.  Out of hundreds perhaps of questions submitted, only seven were asked, and two were nearly identical about harming informants.

“Why don’t you accept extradition to the U.S. and stare out your accusers?” was one question that was met with multiple outbursts from the audience: “That’s a stupid question”…

Assange’s forthright and clarifying responses were applauded, especially his assertion that Wikileaks still didn’t have “blood on its hands.”

At one point Assange went on a roll of “live leaks”, citing dubious redactions from cables by mainstream media. Not only names but facts were removed, and Assange began filling in some of the details.

At that moment Kelly tried to stop his “CUT TO THE CHASE!”, doing her utmost to shut Assange down.

But because of the very long satellite delay he couldn’t hear her, so he insouciantly continued, and she became visibly flustered while trying to speak over him. Even after he must have heard her, Assange kept going and the excitement of the audience rose to fever pitch. It’s not clear why there was this delay. If it was to allow the organizers to cut him off, the way 7-second delays work on live radio in the U.S., it didn’t work.

It was good theatre.

The host had lost control of the narrative. Assange had conquered the 7-second delay.

An earlier version of this article appeared on Cathy Vogan’s blog THING2THING in 2011.