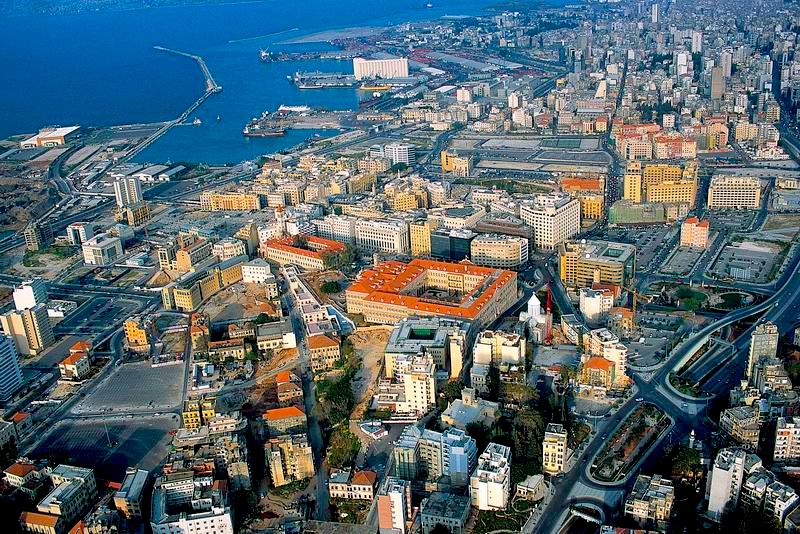 Aerial view of the Port of Beirut. (Wikimedia Commons)

Britain and France enjoy an unfairly favorable reputation in the Middle East. Because their plots and designs are not as crudely and explicitly manifested as those of the U.S., it is often assumed by people in the region that France and the U.K.  have retreated and simply vacated the scene to the U.S.

The rise of the “American Century” fueled false local assumptions about British and French innocence although neither of the two European powers ever left.  There are a couple of reasons for this. British diplomats in the Middle East, for one, are unlike U.S. diplomats because most have good command of Arabic while the last U.S. ambassador in Lebanon, for instance, who was fluent in Arabic was Richard P. Parker in 1977.

British diplomats engage with the natives and have been lately posting images of local dishes that they presumably have cooked.  Nevertheless, they can’t help but show the ugly face of colonial European power: the seemingly mild recent U.K.  ambassador in Beirut, Chris Rampling, bragged that he hired Palestinian women from a refugee camp to cook for him and his friends and called that “empowerment of women.” (He removed the tweet when I mocked him). But the jovial tone of tweets by British diplomats can’t obscure the sinister roles of European powers in Lebanon and elsewhere.

While Canada and Britain project an image of innocence, their roles are often closely coordinated with the U.S.  Washington needs European powers because an explicit U.S. role raises suspicion.  Before the 1990s, Canada did indeed have a different role in the region and pursued a rather independent Middle East policy from the U.S. But that changed in the 1990s, when the Zionist lobby in Canada (which is quite formidable) ensured that Arabists are to be purged from Canadian departments and agencies. Canadian foreign policy became rather indistinguishable from that of the U.S.

British intelligence has a long history as the most powerful player in the Arab East for the first half of the 20th century.  The Jewish Agency (the intelligence arm of the Zionist movement) probably ranked second in influence and intrigue.  It was only after the 1956 Suez crisis and the crucial events of 1958 that the U.S. replaced Britain as the most dominant intelligence presence in the region. In Lebanon, the “independence struggle” was nothing more than a British intelligence operation against the French colonial government in Beirut. Much of the Lebanese political class, especially the “founding fathers of Lebanon’s independence,” were beholden to British interests. 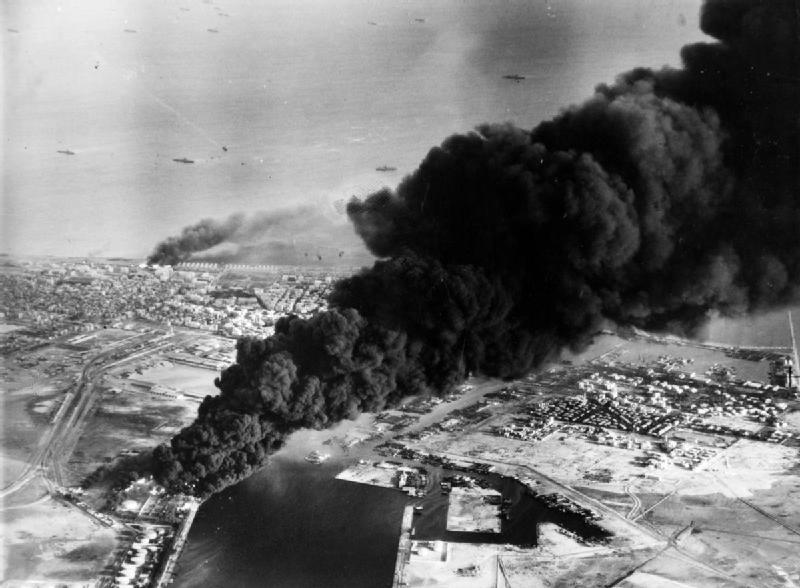 The rise of U.S. diplomatic and intelligence dominance in the Middle East has not ended British or French roles in the region. (It is significant that a former French ambassador in Lebanon is currently the director of the French General Directorate of External Security — DGSE).

Western powers coordinate plans for the Middle East. Britain, France and the U.S. are permanent members of the UN Security Council and Britain belongs to the exclusive “Five Eyes” intelligence club with the U.S., Canada, New Zealand and Australia. The Middle East is replete with examples of Western intelligence and diplomatic collaboration:  the 2003 invasion of Iraq, the NATO operation against Libya and the political exploitation of the assassination of Rafiq Hariri in 2005, a joint Western-Gulf and Israeli operation. 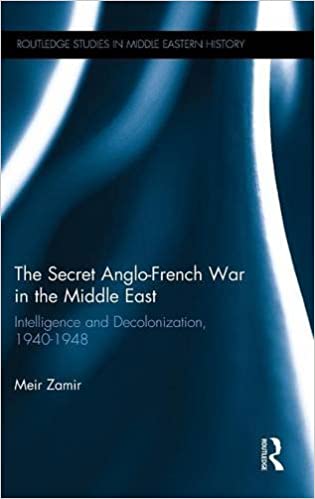 There is much that is revealed in a newly discovered batch of British and French secret intelligence documents in The Secret Anglo-French War in the Middle East: Intelligence and Decolonization, 1941-1948 by Meir Zamir (an Israeli historian who specializes in Lebanese history).

The book reveals a high degree of penetration into the political classes of Syria and Lebanon.  We are talking about the “club,” described by Zionist writer Jon Kimche as including Arabists of various departments and agencies of government, oil company officials, writers and journalists — in addition to collaborating natives (See Jon Kimche, The Seven Fallen Pillars: the Middle East, 1915-1950, pp-7-8).

Zamir calls for a rewriting of the contemporary history of the Arab East on the basis of these documents that reveal a degree of collaboration — not only cooperation—between the British government and major historical figures like Shukri Quwatli (president of Syria 1943-49; 1966-58), Jamil Mardam (Syrian politician who was recently alleged to have been on the payroll of Zionists), Riyad As-Sulh (founding prime minister of Lebanon), among others.

This collaboration was not so much to achieve Syrian independence but to spread British hegemony.  The documents show that Britain twice succeeded in making Riyad As-Sulh prime minister (in 1943 and 1946). In return, As-Sulh urged his father-in-law, Syrian politician Sa`dallah Al-Jabiri, to go soft on Britain. 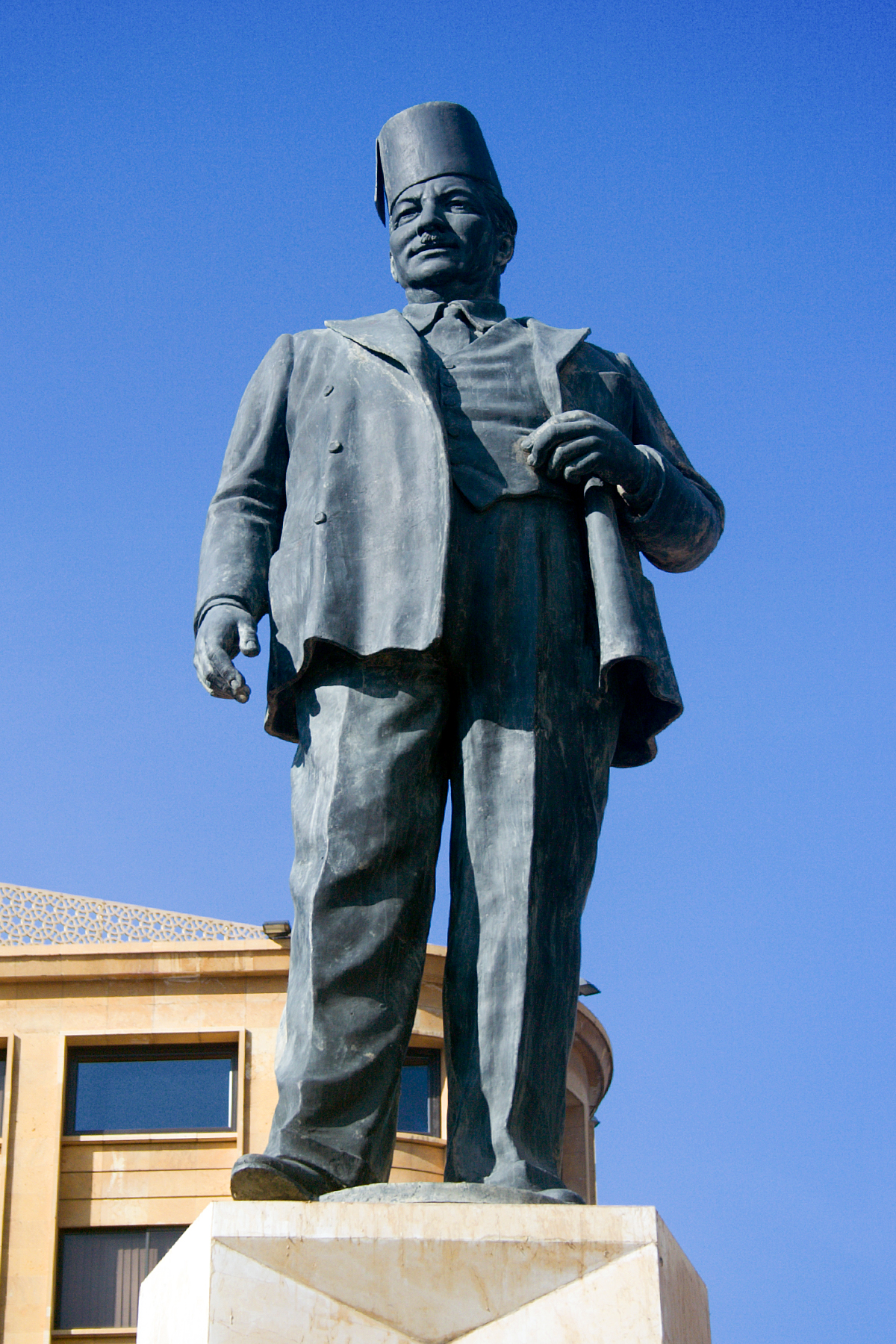 The list of politicians who were recruited by British intelligence at the time was long and includes Hasanayn Basha (adviser to King Farouk), Muhsin Al-Barazi, Mikha’il Ilyan, Fayiz Khuri, Khayr Ad-Din Az-Zarakli (adviser to King Abdul-`Aziz), Midhat Shaykh Al-Ard (personal physician of King Abdul-Aziz) and Kamil Sham`un (second president after independence in Lebanon and one of the leaders of right-wing militias during the civil war).

The British oil company in Iraq (IPC) and British Overseas Airways Corporation (BOAC) were key instruments and fronts for British intelligence operations.  The documents distinguish between those who provided information, promoted polices, and helped shape public opinion and those who actually undertook “intelligence operations,” like Kamil Sham`un and Muhsin Barack. (p. 80).

British intrigue in the Middle East was also the subject of a recent leak of documents related to the British embassy in Beirut, (they were leaked by “Anonymous” and were posted on the site of Moon of Alabama).  The documents came on the heels of another release three months ago about British propaganda work on behalf of Syrian rebels.

Such releases are of course ignored by mainstream Western media because they relate to programs and operations that are consistent with the political biases and orientations of Western governments and media. The documents on Syrian rebels and on Lebanon underline a huge role undertaken by the British Dubai-based company, ARK. The company, which was founded and is led by former British officials, appears to coordinate U.S. and British propaganda operations in the region.

To be sure, the documents seem to be unclassified material related to the operation of the British embassy in Beirut.  But it can be easily ascertained that the embassy (at least from these documents, which the British ambassador in Beirut refused to comment on when asked by Lebanese media) was engaged in activities that would close the Lebanese embassy in London if it were engaged in similar activities. 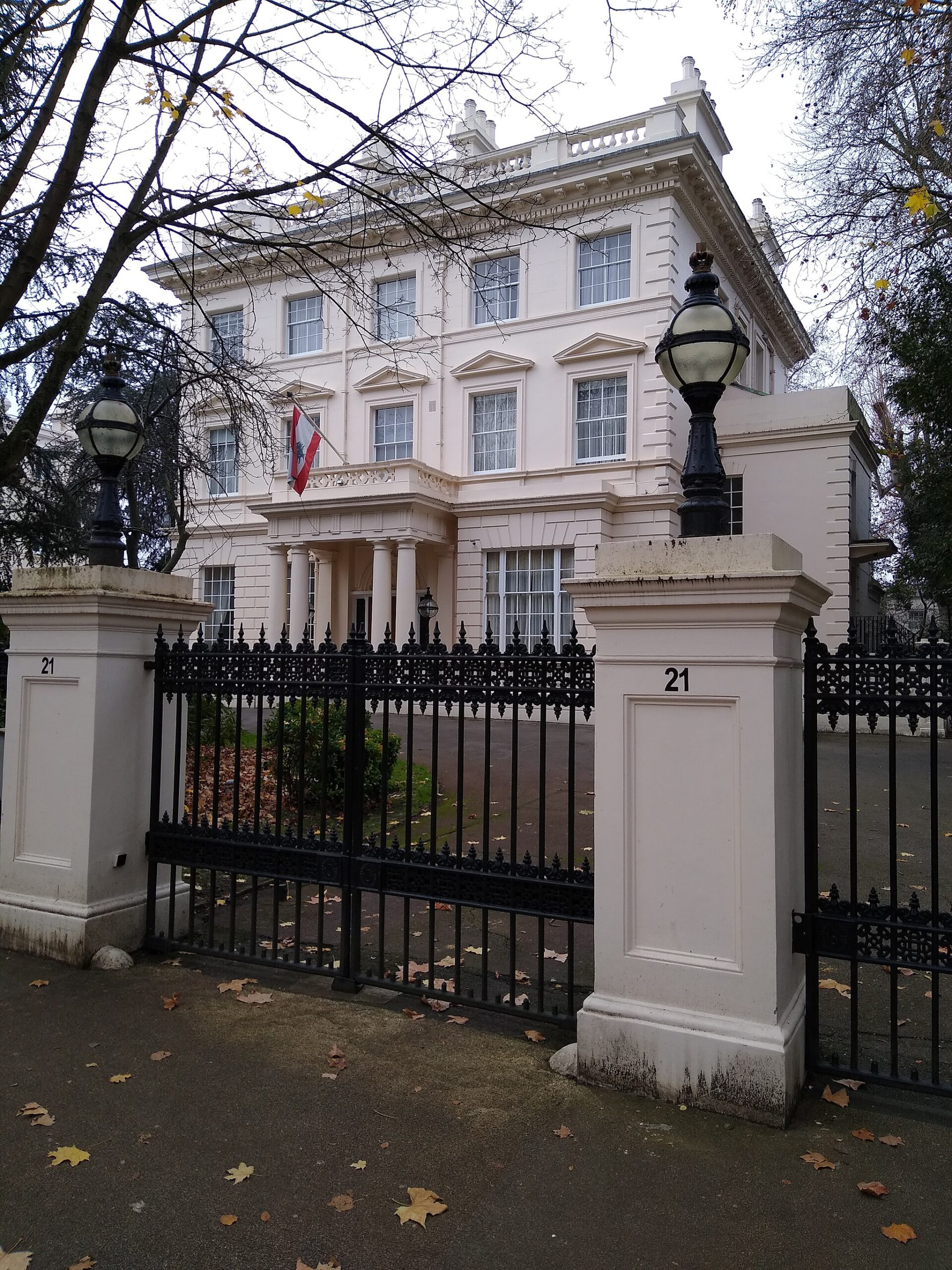 It’s clear Western powers allow their embassies to do things they would never allow developing countries to do from their embassies in the West.  After the humiliating defeat of Israel in Lebanon in 2006, there has been a feverish escalation of the propaganda war in Lebanon against all those who declare resistance against Israel.

Western powers and Gulf despots have been funding various political parties, politicians and most importantly NGOs to produce a counter-resistance narrative.  NGOs are now favored over traditional political parties because they are not only more likely to appeal to young people, but they also recruit and employ youth.  The NGO culture has been the fertile ground for Western and Gulf conspiracies and intrigues, and a willing promoter of the agenda of Gulf despots.

The Saudi and UAE regimes now partner with Western media (Bloomberg, Sky News, CNN, The Independent, etc) to produce Western-branded local propaganda.  The Saudi electronic army now often dictates the top hashtags of most Arab nations. Regardless of what is going on in Arab countries, you will see hashtags in praise of Saudi Crown Prince Mohammad bin Salman or some Saudi event or development as top trends on Twitter.

The British embassy documents show that it is actively engaged in cooperation with companies, societies and personalities to mold public opinion and to promote certain politics that are consistent with the Western agenda in the region. 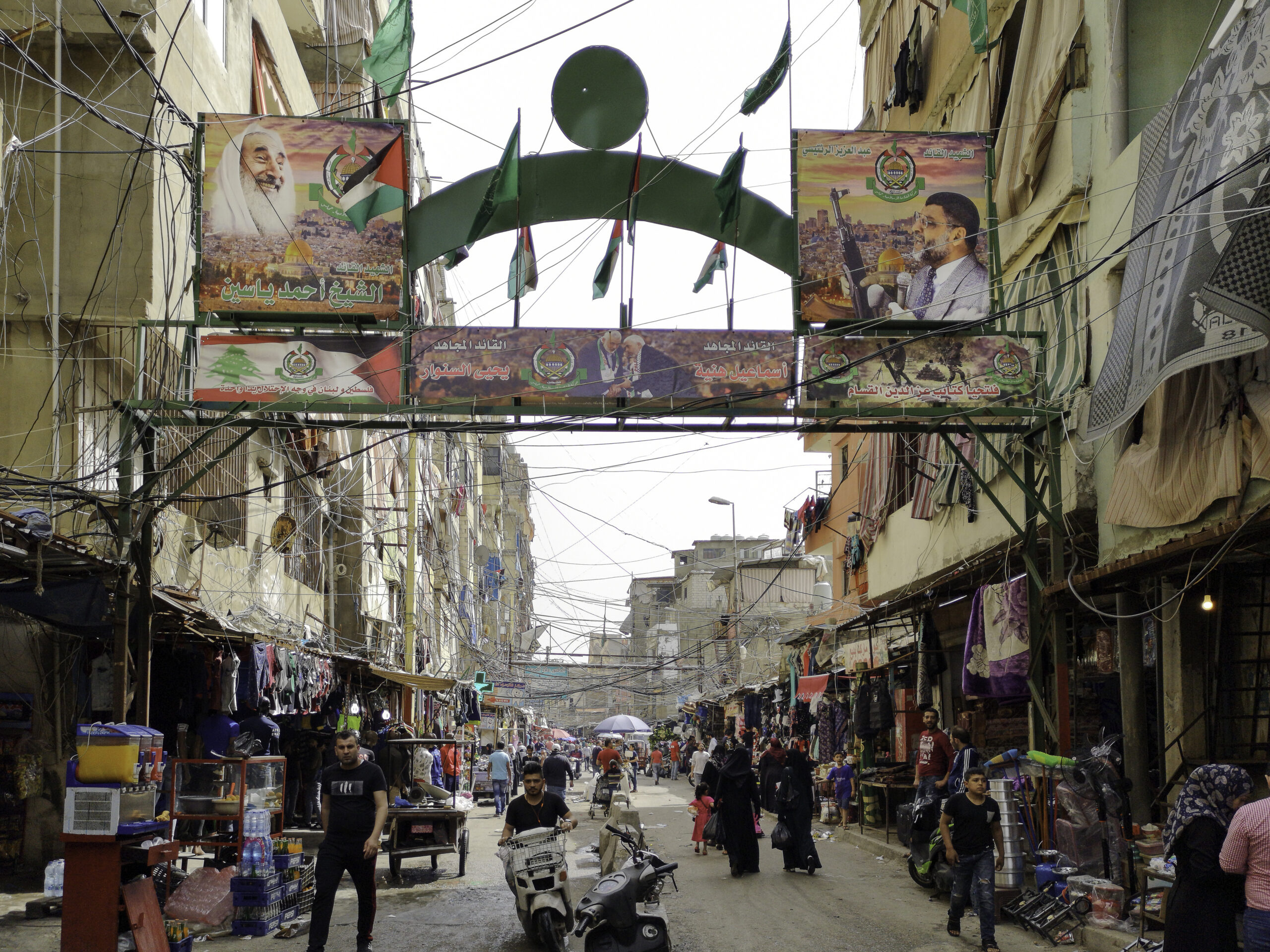 The documents portray ARK as deeply experienced in political and propaganda work in Lebanon, priding itself in one document for its “wide experience” in implementation of policies.  The company has been active in voting initiatives, youth political participation (even against Israel?), and one document talks about its work arranging local favorable media “coverage” for its activities.

The news broadcasts of the three key TV networks in Lebanon (New TV, LBCTV, and MTV) now all carry the same pro-Western message. New TV had in the past been a staunch secular supporter of resistance movements against Israel.  Since the Saudi war on Yemen, all media were brought to their knees with a combination of payments, contracts, and threats.

That’s because the Gulf regimes decide which TV stations can be carried on the two Arab satellite systems. Those channels now carry statements by David Hale, the U.S. under-secretary of state for political affairs and a former U.S. ambassador to Lebanon, live and without interruption or rebuttal. U.S. officials appear with subservient journalists who don’t dare ask probing questions (an example would be Albert Constanian on LBC TV, who seems to be favored by U.S. Assistant Secretary of State David Schenker).

Reading through the documents one encounters names of companies from insurance firms to the famous Saatchi & Saatchi, the advertising powerhouse that helped the Jordanian king improve his image and designed the publicity of the “Cedar Revolution.” The documents help one better understand the Western management of the political movement run by Washington in the aftermath Rafiq Hariri assassination in 2005.  Some of the documents casually talk about the deterioration of the security situation and another discusses the effort to keep locals in the dark.

The British government doesn’t mind working with traditional parties as long as they follow the British agenda: there is one document that talks about the Union of Minyah Municipalities, which is affiliated with the Future Movement of Saad Hariri.  Another document talks about working with universities, youth groups, social movements, on-line movements, MPs, and political parties and municipalities.

There is also keen interest in public opinion in these documents.  There are surveys commissioned by the British embassy and focus groups held all over Lebanon.  One survey asks about areas of concern among the Lebanese people and Hizbullah’s arms are not among them, contrary to Western propaganda.

One of the most dangerous parts of the documents reveal a deep penetration by the British government into Palestinian refugee camps, which have ceased to be centers of resistance against Israel.  Western and Gulf governments have been working for years to pacify the camps and prevent them from agitating and recruiting against Israel.

The documents were ignored by the Western and Arab press (with the exception of Al-Alkhbar in Beirut).  Western media have been heavily invested in Lebanese and Syrian affairs since at least 2005 and rarely if ever allow for viewpoints that run contrary to Western plots and machinations.

These documents help make it clear how the West hasn’t moved on from its colonial legacy.  The natives are still regarded as mobs to be controlled and manipulated.

3 comments for “THE ANGRY ARAB: British Plots in Lebanon”