The destruction over the past five years of Australia’s mutually beneficial diplomatic and trade relationship with China was probably a successful “Five Eyes” information warfare operation,  writes Tony Kevin. 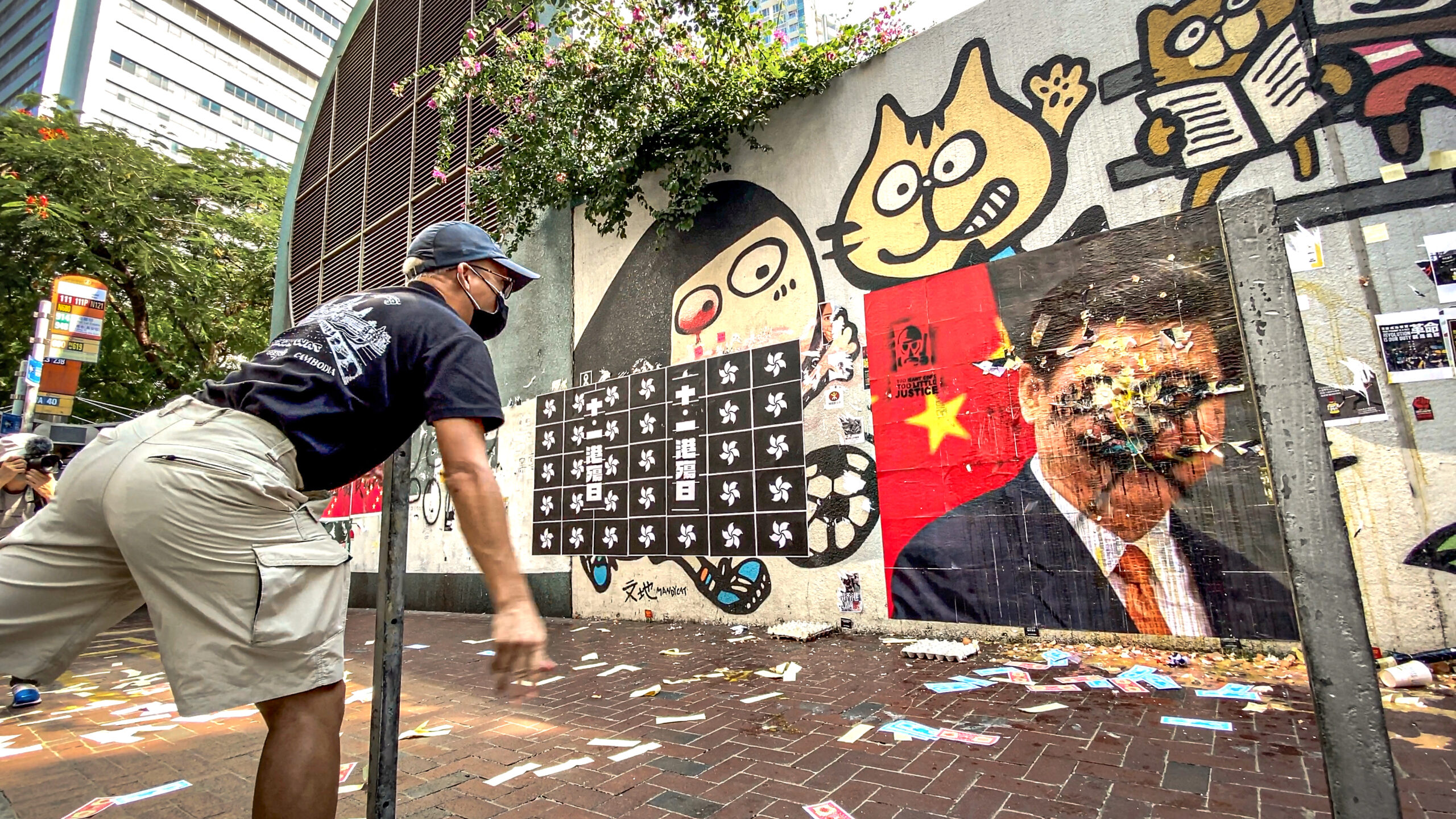 The address to Federal Parliament by Chinese President Xi Jinping on  Nov. 17, 2014, marked a highwater mark in bilateral relations.  Xi was in Australia for the G-20 summit in Brisbane hosted by Prime Minister Tony Abbott. His theme was that China was committed to peace but ready to protect its interests.

Since then, the relationship has gone downhill — first slowly and haltingly, but over the past two years with sickening acceleration. Now the relationship seems irretrievable. For educated Chinese, Australia is now an object lesson in Western arrogance, hypocrisy and betrayal of friendship.  The dinner party has ended in upended chairs, shouts and bitter accusations as both sides angrily walk away.

After the high symbolism of the Xi speech, all seemed well. In 2015 the Darwin Port was leased to a Chinese company for 99 years.  Growing numbers of Chinese students and tourist visitors to Australia were becoming mainstays of Australia’s thriving higher education, tourism and property sectors. China as an Australian export market grew steadily in significance: last year it represented nearly 50 percent of Australian commodity export earnings. Victoria in 2018 signed a memorandum of understanding with China to work with China’s Belt and Road Initiative.

Please Contribute to Consortium News During

From the beginning, there were signs that powerful forces were determined to cripple Australian-Chinese engagement: and they have now seemingly won.  The present breakdown is tragic for Australian economic and political interests. Many innocent Australians’ livelihoods are being harmed by our own government’s and political class’ stupidity.  It is hard to see now how the damage done to Australia-China relations may be healed anytime soon.

Controversially, I contend that Australia has over the past six years lived through a textbook experiment of covert foreign policy interference by powerful Anglo-American influences, subtly working through local sympathizers in public life here.  Australian political elites — already culturally predisposed to trust Anglo-American friends, and naive as to their power and guile — have been persuaded to adopt increasingly adversarial positions against China across a broad front.  This essay can only hint at the breadth and skill of this classic Five Eyes information warfare operation: it would take a book to expose it fully. 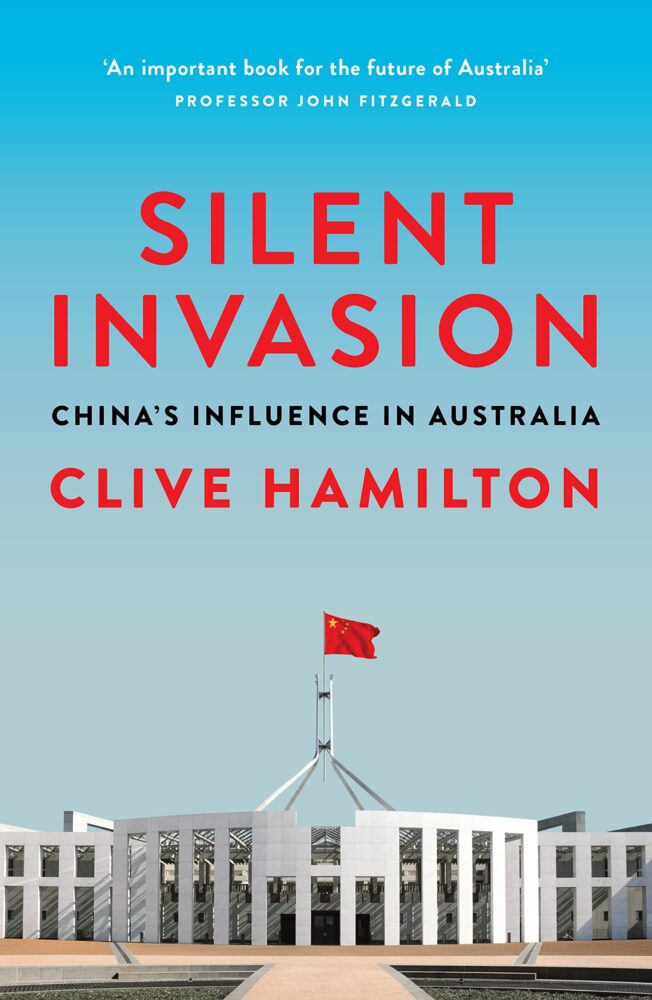 Clive Hamilton’s notorious attack on China,  Silent Invasion, was published early in 2018. Hamilton had been China-bashing on the fringes of Australian academe for some years beforehand but was still being generally dismissed as an embarrassing outlier. Andrew Podger’s 21 March 2018 review in The Conversation was typical of the Australian mainstream rebuttal of Hamilton’s views, then considered extreme:

“Perhaps Hamilton’s book is a useful reminder that we must not be naïve about our relationship with China. But his prescription, premised on China being our enemy and determined to achieve world domination, is precisely the wrong direction for addressing the genuine issues he raises. We should engage more, not less.”

In 2018, the influential and U.S.-sympathetic Joint Parliamentary Committee on Foreign Affairs Defence and Trade supported Malcolm Turnbull’s Foreign Interference Legislation, pressed by Australian security agencies and aimed principally at China. The law was passed in 2019.

Apparently this cartoon is "insulting" (Daily Mail). Not sure whether more or less so than the depiction of Australian war crimes carried out (on behalf of the US) in Afghanistan. pic.twitter.com/8Gj3NRF3Ew

Chinese academics and journalists, even a senior NSW parliamentarian, have been harassed and vilified under its powers.  Now, a further bill will strengthen Commonwealth control over state and university links to foreign governments: again, the prime target is China, and any Australian premiers who may dare to enmesh their states economically with her. Victoria’s and Western Australia’s Labor premiers are particular targets.

Australia conducts repeated naval freedom of navigation exercises in the South China Sea, in protest against Chinese consolidation of its military control over islands there. Australia supported a bogus U.S.-influenced South China Sea case against China in the International Court of Arbitration, a case bitterly condemned and rejected from the outset by China.

Since 2018, Australia responding to American pressure has banned Huawei from telecom operations here, causing a major rift. The philosophy of economic engagement expounded by Abbott and Xi in 2014 is since 2018 under direct frontal attack. In August 2020, a non-strategic Chinese purchase of a large Australian dairy company was vetoed.

The message had now become, Australia wants to go on profitably exporting minerals and foodstuffs to China but to have as little to do with China as possible at the human level. Chinese students here have been accused of doing the bidding of the Chinese Communist Party, and concerns raised about Chinese influence in our universities.  Chauvinism and Sinophobia in Australia have grown.

Covid-19 caused further major rifts in 2020. Prime Minister Scott Morrison clumsily mishandled a peremptory Australian demand to WHO  – reportedly originating in a request to him from U.S. President Donald Trump – to mount an intrusive international investigation in Wuhan into the origins of the “Chinese virus.” China saw that act in particular as a gross act of treachery by a friend.  Morrison never apologized. 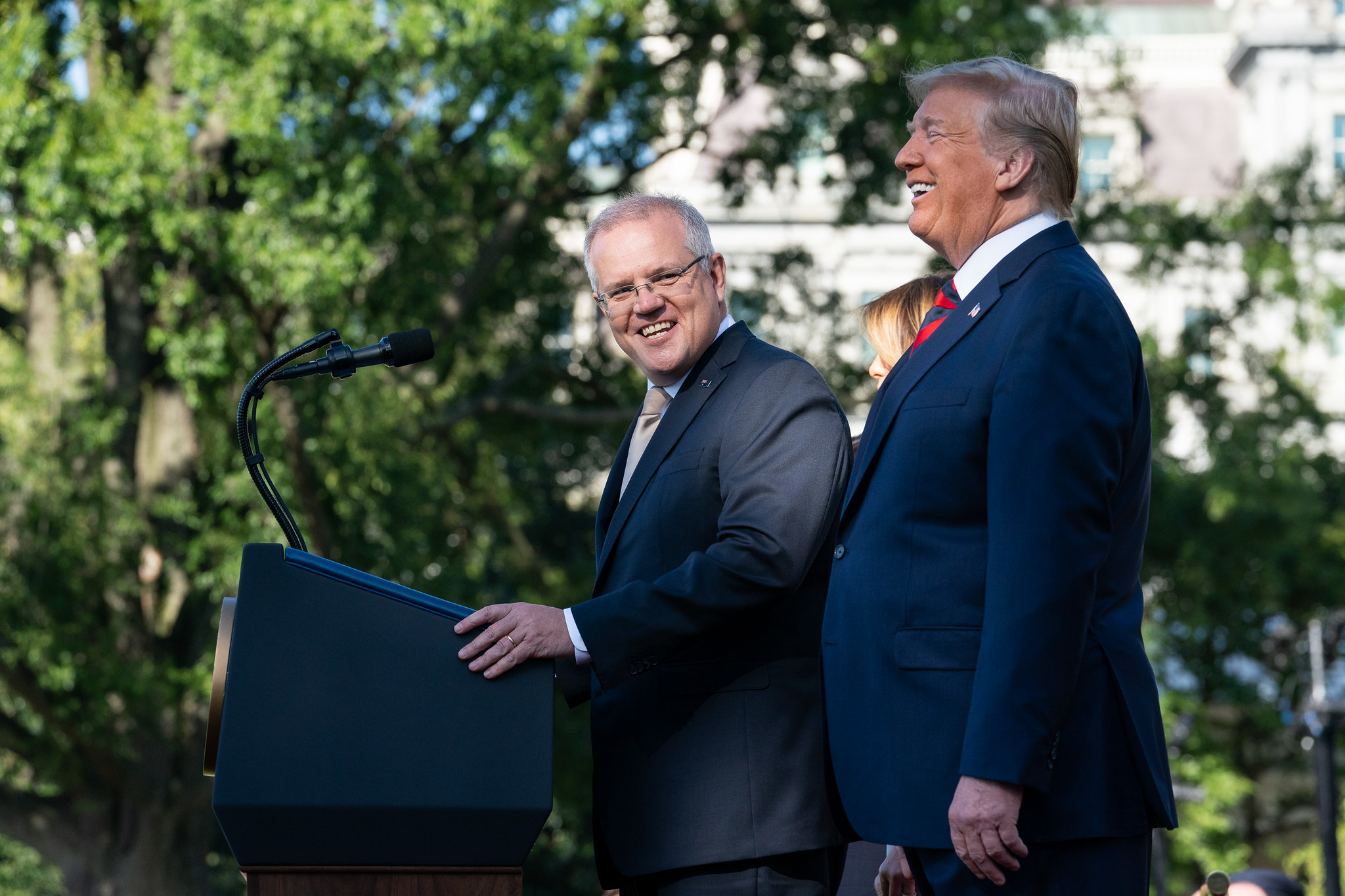 The tone of Australian mainstream media commentary on China has by now changed utterly to hostility.  Establishment commentators and leader writers compete on who can season their journalism with the strongest anti-Chinese language. All pretence of objectivity or straight reporting of tensions is gone: this is now advocacy journalism.  Dissenting opinions are discouraged. As media increasingly runs with the ball of Sinophobia, Morrison has begun to try to step back.

He and Turnbull having started the hares running, now call unconvincingly for moderation.  Not just the Murdoch Press but the Australian Financial Review is full of anti-Chinese polemic. China is bitterly criticized as seeking to dictate terms to the world. The Western media outside Australia are picking up the cue.  The campaign has taken on McCarthyist, even racist-tinged tones: how dare these Chinese presume to stand up to our Western “universal values?”

Every Chinese effort to rebut the growing abuse is taken as sign of further Chinese bullying. Their Canberra embassy’s circulated “fourteen grievances”  – an effort to list the problem China  has with Australian behavior towards them as a basis for public discussion –  were  mocked. China is falsely stereotyped as the provocateur and Australia the victim. 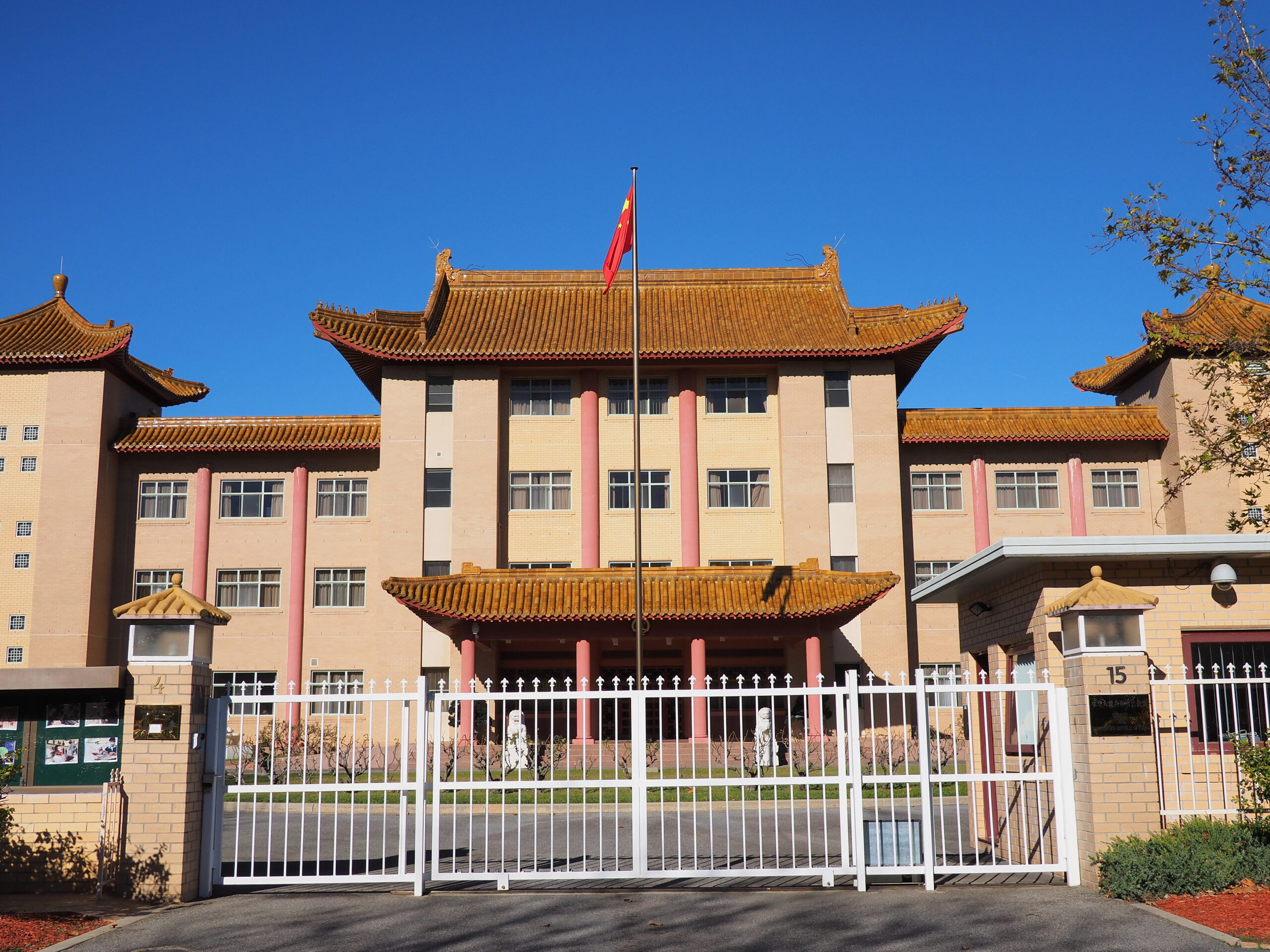 Around a few weeks ago, China would have finally decided that Australia could no longer be regarded as a trustworthy and decent partner in dialogue.  They would have given up on Australia. The Brereton Report with its reported SAS murders in Afghanistan was an irresistible opportunity for what the West has offensively labelled “wolf warrior” Chinese diplomacy.  The photoshopped image of an SAS baby murder, illustrating a tweet by a senior Chinese foreign ministry official criticizing Australian hypocrisy,  was emphatically condemned by Morrison, who demanded a Chinese apology. China refused.

La commedia e finita.  Australian politicians have swung in behind Morrison, while our traders and growers look on with helpless horror. How can what was a good relationship in 2015 have degenerated to this in just five years? Senior people in industry and trade – like Morrison’s own Covid recovery adviser Nev Power pleaded on Dec. 2 for a diplomatic solution to ease tensions between Beijing and Canberra.

But those who want to see Australia decoupled from China in as many ways as possible stay contentedly silent, looking back with satisfaction on their hidden work of destruction. Australia is safely back in the Five Eyes laager, and those who hoped economic rationality would triumph over global geopolitical exclusion games have been defeated.

Australia’s all-important Asia-Pacific region quietly draws a different lesson from this sad story: the lesson is, do not behave as Australia has done in dealing with China. Treat China with normal diplomatic respect and courtesy, as befits friendly neighbors. Even regional countries that have clashed militarily with China know not to provoke her needlessly, as Australia has done.

Morrison probably sees stoking up anti-Chinese prejudices as a useful distraction from his many governance failures at home: on Robodebt, on Covid-19 preparedness, on bushfires and climate change. Sock the Chinese as if there are no consequences for us.

But the consequences will be great. Australia will be needlessly poorer, more isolated from our region, and more dependent on the uncertain protection of faraway Five Eyes friends. Without a dialogue with China, our necessary engagement with our region will be handicapped. Lee Kuan Yew’s friendly warning — “be careful or you will be the poor white trash of Asia” — comes back now to haunt us.

Tony Kevin is a former Australian ambassador to Poland and Cambodia, an emeritus fellow at Australian National University, Canberra, and the author of Return to Moscow (2017).

← Democracy is Not a Fact, But an Enduring Struggle
Who Gets it First? →

33 comments for “Australia Sabotaged Its Own Interests in China Relations”