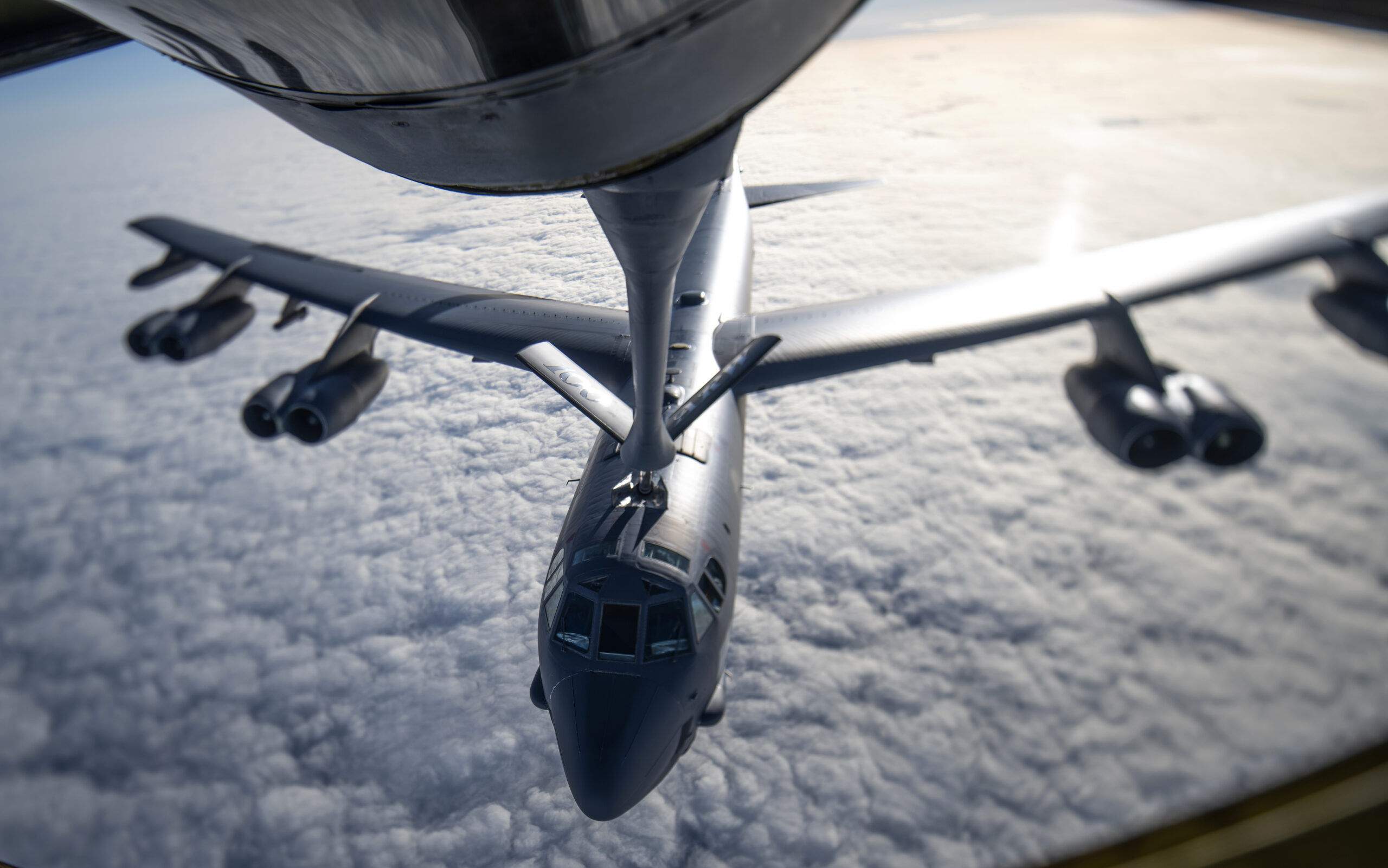 A U.S. Air Force B-52 Stratofortress receiving fuel from a KC-135 Stratotanker on May 7, 2020, during a strategic training mission. (U.S. Air Force, Emerson Nuñez)

In the weeks remaining before Joe Biden’s inauguration, President Donald Trump is taking actions — including aiding and abetting murder — to prevent his successor from pursuing diplomacy with Iran.

On Nov. 27, Israel assassinated Mohsen Fakhrizadeh, Iran’s top nuclear scientist. International law expert Richard Falk called it “an outrageous act of state terrorism.” Although the Israeli government has not claimed credit for the illegal killing, there is little doubt of its culpability. Trump implicitly praised the assassination, retweeting a comment by Israeli journalist and intelligence expert Yossi Melman that the killing was a “major psychological and professional blow” to Iran. This was an “implicit approval if there ever was one,” according to Sina Toossi, a senior research analyst at the National Iranian American Council.

The Israel Defense Forces have been ordered to prepare for a possible U.S. military attack on Iran before Trump’s term ends, senior Israeli officials told Axios. They expect “a very sensitive period” leading up to Biden’s inauguration.

In mid-November, Trump requested plans to attack Iran’s Natanz nuclear power facility but was reportedly talked out of it. Israeli Prime Minister Benjamin Netanyahu met with Crown Prince Mohammed bin Salman in Saudi Arabia and strategized about Iran; Secretary of State Mike Pompeo was also at the meeting. Pompeo visited Israel, the West Bank, the Golan Heights and several countries in the Gulf to discuss Iran.

During Pompeo’s visit to the Gulf, the U.S. Central Command announced that B-52 strategic bombers carried out a “short-notice, long-range mission into the Middle East?to deter aggression and reassure U.S. partners and allies.”

And in an unusual move, the U.S. military sent the aircraft carrier the U.S.S. Nimitz back to the Gulf region following the assassination of Fakhrizadeh.

“All options are on the table,” State Department officials who were traveling with Pompeo told reporters. 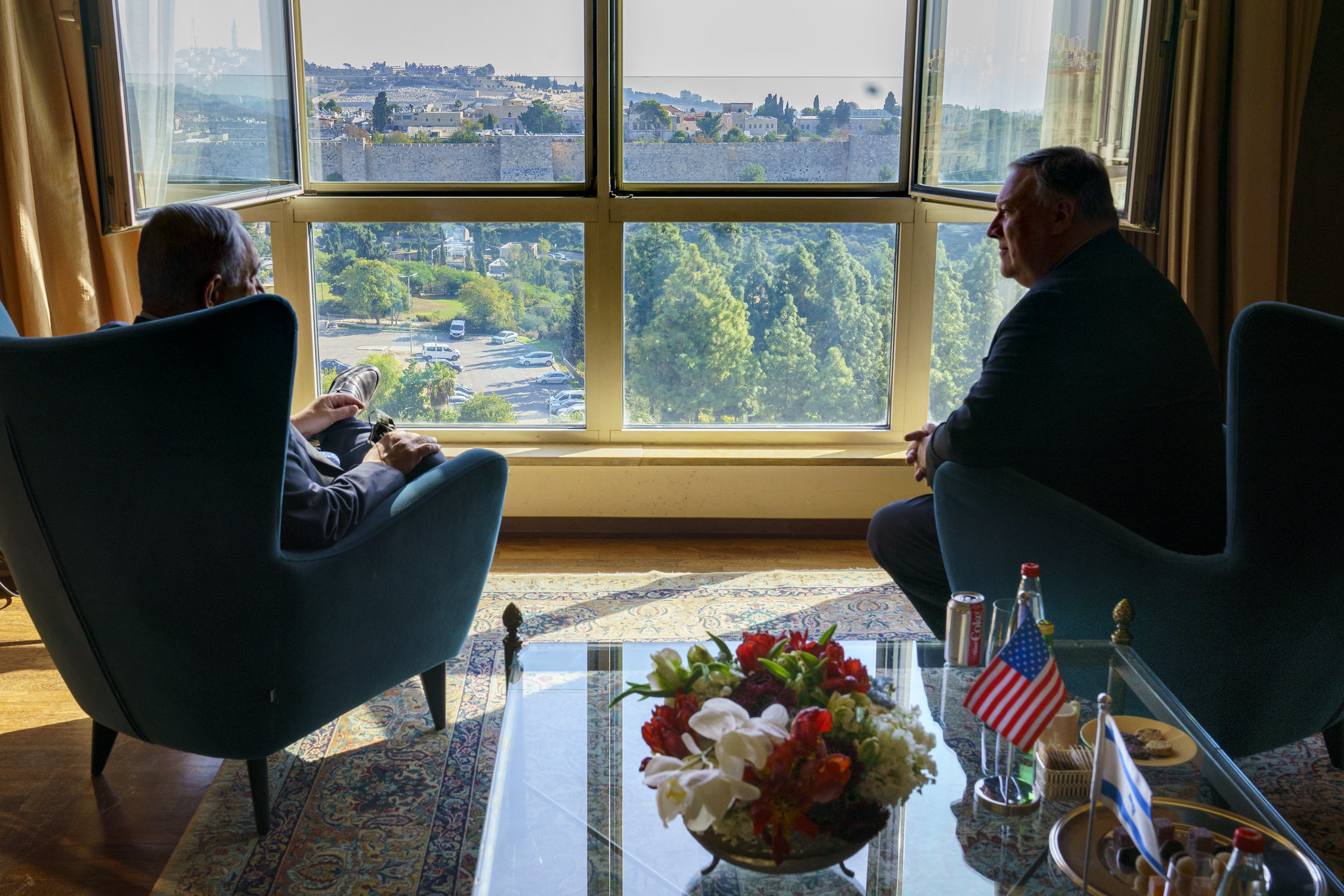 Israeli leaders think Iran poses an existential threat to Israel’s existence, in spite of the fact that Iran has never attacked Israel or any other country in the last 200 years. In fact, Israel is the only Middle East country that has nuclear weapons and it refuses to join the new UN International Treaty on the Non-Proliferation of Nuclear Weapons.

At Netanyahu’s urging, Trump pulled the United States out of the Iran nuclear deal, which was preventing Iran from developing nuclear weapons. And in January, the Trump administration illegally assassinated Iran’s top general, Qassim Suleimani. Shortly before that assassination, Pompeo followed the same pattern — traveling and meetings with U.S. allies in the region, according to Iranian American journalist Negar Mortazavi.

The Iran nuclear agreement is embodied in the 2015 Joint Comprehensive Plan of Action (JCPOA), negotiated during the Obama administration between Iran, the U.S., France, U.K., Russia, China, Germany and the European Union. Iran, which has consistently maintained that its nuclear program is only intended for peaceful purposes, agreed to restrict its uranium enrichment and other nuclear activities. In return, it received relief from the punishing U.S. sanctions. The UN International Atomic Energy Agency certified several times that Iran was complying with its obligations under the agreement. Nevertheless, Trump withdrew from the JCPOA in 2018 and reimposed the sanctions against Iran.

One year after the U.S. withdrawal, Iran began to pull back from its commitments under the JCPOA, which allows a party to abandon its obligations if another party is in noncompliance. Trump intensified the sanctions that have devastated Iran’s economy, impoverished 82 million Iranians and hindered its ability to respond to the pandemic. With his campaign of “maximum pressure” on Iran, Trump has waged economic warfare against the Iranian people.

As Iran’s Foreign Minister Javad Zarif has suggested, it appears that Trump has outsourced much of his Middle East policy to Israel, which has led to the worst relations between the U.S. and Iran in 40 years.

Trump spent his entire presidency enabling Israel’s illegal oppression of the Palestinians, with self-identified evangelicals Pompeo and Mike Pence driving Trump’s Israel policy. Christian Zionists believe there will be no second coming of Jesus until the Temple in Jerusalem is rebuilt, and that is more likely to happen if the Temple Mount remains under Jewish rather than Palestinian control.

It is becoming clear that Trump aims to cater to Israel’s agenda until he leaves office. 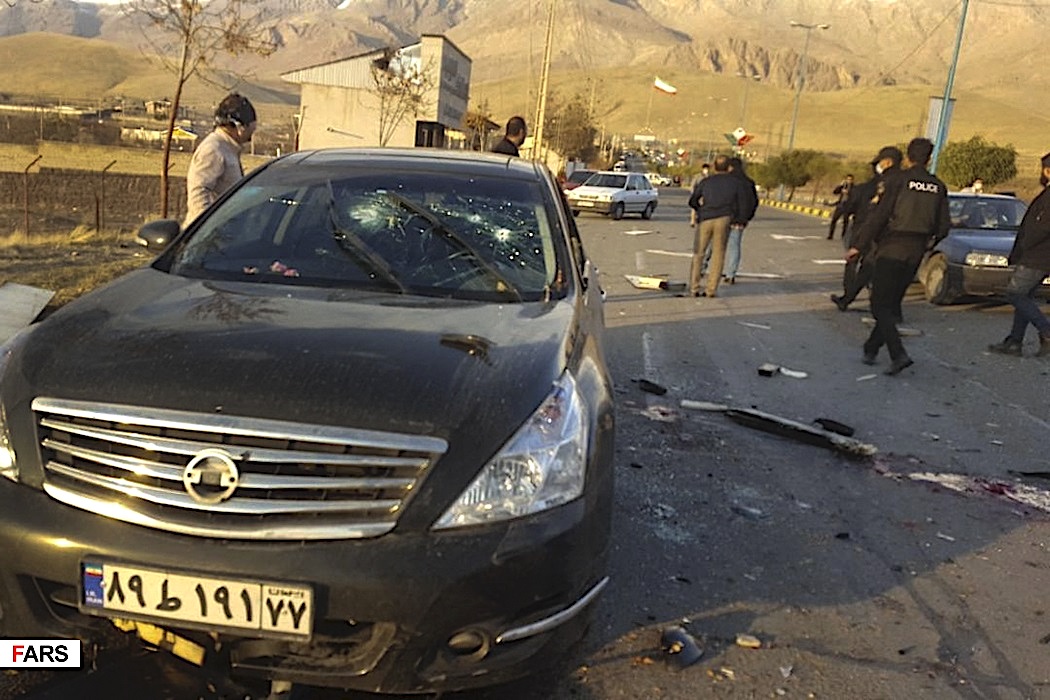 Aftermath of the assassination of Mohsen Fakhrizadeh in Absard, a city near Tehran on Nov. 27. (Fars News Agency, Wikimedia Commons)

Hopefully, Iran will resist the apparent U.S.-Israeli attempt to provoke it into retaliating for Fakhrizadeh’s assassination and thereby provide Trump with a pretext to launch a retaliatory strike, which would ignite a war in the Middle East. The U.S. military already has more than 40,000 troops in the region on high alert.

Iranian President Hassan Rouhani pledged to respond to the assassination of Fakhrizadeh at the “proper time.” Rouhani said, “The Iranian nation is smarter than falling into the trap of the Zionists. They are thinking to create chaos.” The day after the assassination, Iran’s parliament unanimously voted to end future UN inspections of Iran’s nuclear sites. The inspections had confirmed that Iran was in compliance with the JCPOA. Terminating them could spell an end to the nuclear deal.

Nevertheless, Zarif hopes Biden will improve relations between Iran and the United States. But hard-liners, who won recent elections and are slated to pick up additional seats in Iran’s parliament in February, could doom any rapprochement with the United States. CODEPINK’s Medea Benjamin and Ariel Gold note that this leaves only a four-month window for negotiations after Biden is inaugurated.

“US & Israel efforts to sabotage Iran’s nuclear program have now morphed into Trump & Netanyahu sabotaging the next US President,” tweeted Jamal Abdi, president of the National Iranian American Council. “They are trying to goad Iran into provocations & accelerating nuclear work-exactly what they claim to oppose. Their real fear is US & Iran talking”

US & Israel efforts to sabotage Iran’s nuclear program have now morphed into Trump & Netanyahu sabotaging the next US President. They are trying to goad Iran into provocations & accelerating nuclear work-exactly what they claim to oppose. Their real fear is US & Iran talking

Much to Netanyahu’s chagrin, Biden has said he wants to return the United States to the Iran nuclear deal, albeit with reconditions.

Tony Blinken, Biden’s nominee for secretary of state, indicated the incoming administration will pursue a policy of uncritical support for Israel. In spite of the mandates in the Leahy Law and the Arms Export Control Act, Blinken stated that Biden “would not tie military assistance to Israel to any political decisions that it makes. Period. Full stop.” The U.S. government supports Israel’s illegal occupation of Palestinian territory with $3.8 billion in annual military aid, in spite of Israel’s war crimes.

Blinken made that statement in a briefing to the Democratic Majority for Israel (DMI), a U.S.-based advocacy group that pushes the Democratic Party to adopt pro-Israel policies. “DMI was manufactured to ensure that Democrats would not stray too far from the pro-Israel party line,” Richard Silverstein wrote at Tikun Olam. “The group has regularly acted as an enforcer within the Party when candidates espouse positions considered anti-Israel.”

It is up to Congress, as well as civil society, to prevent the Biden administration from continuing the U.S. policy of caving to Israel’s demands — a practice that not only deepens the oppression of the Palestinians but could also actively imperil the national security of the United States.

Meanwhile, we must pressure Congress to prevent Trump from attacking Iran. The consequences to the Middle East and the entire world would be catastrophic.