Jan Nijman describes the demographic changes in what has become one of the country’s most politically divided states. 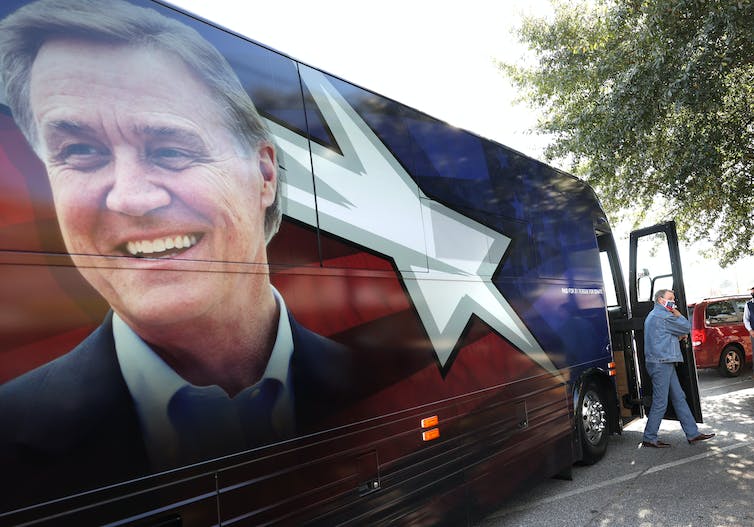 Over the past 36 years, the state of Georgia has voted for Republican presidential candidates in every cycle except 1992, when voters backed Bill Clinton. In the past 20 years, it voted consistently for Republican governors and for Republicans in the U.S. Senate.

But if the results, as currently reported, stand, Georgia will have helped elect Joe Biden as the 46th president of the United States. Control of the U.S. Senate, too, may be decided in Georgia, as the voters forced two Senate races into runoff elections to be held on Jan. 5.

Biden’s Georgia lead is only razor-thin and did not materialize until the morning of Nov. 6, as the final votes were tallied. A recount is set to take place.

U.S. Senate races in Georgia that do not deliver an absolute majority of the vote go into a runoff phase that pits the two leading contenders against one another.

Incumbent Republican Sen. David Perdue faced challenges from Democrat Jon Ossoff and Libertarian Shane Hazel. Perdue’s share of the vote dipped below 50 percent on Nov. 5 and did not recover. In the runoff, he’ll face Ossoff.

In the other Senate race in the state – a special election for Republican Johnny Isakson’s seat – 20 candidates competed. Incumbent Republican Sen. Kelly Loeffler, appointed by Gov. Brian Kemp, and Democratic challenger Raphael Warnock will advance to the runoff.

In some ways, these two candidates couldn’t be more opposite. Loeffler is a white, wealthy, suburban woman who campaigned on her close ties to Trump; Warnock is the progressive, grassroots-oriented, African American pastor of Atlanta’s Ebenezer Church, where Martin Luther King Jr. preached.

Regardless of the final outcomes of Georgia’s two Senate races, the results from the 2020 elections reflect just how much the state’s political landscape has changed in recent years.

An Outlier in the South

Since 2000, the population of the Atlanta metropolitan region has grown tremendously, making it one of the three fastest-growing metro areas in the nation. It now contains about two-thirds of Georgia’s entire population. The rest of the state’s growth has been concentrated in other smaller metro areas, such as Savannah and Macon. At the same time, large swaths of rural Georgia have witnessed population decline.

The bulk of that growth has been in the suburbs, which have become increasingly diverse in terms of race, ethnicity and class. In the suburbs that do remain majority white and middle class, women are now more likely to be college-educated working professionals. These trends generally favor the Democratic vote, and it’s why the suburbs – in Georgia and across the nation – have become important electoral battlegrounds.

It is not just that many urban, historically Democratic, counties turned out the vote in 2020; it is that many outer suburbs became much less red. Take, for example, Fayette County, one of Atlanta’s large southern suburbs, which has about 68,000 votes: Trump won Fayette with a 19-point margin in 2016 but that margin shrunk to 6 points in 2020.

No other state in the South has such large urban and suburban populations relative to the overall state population. If Georgia is demographically and politically becoming unlike neighboring Republican strongholds like Alabama and Tennessee, it has, in some respects, moved in a similar direction as Arizona, where the two major metropolitan regions of Phoenix and Tucson make up over 80% of the state’s population, and where Democrats have improved their standing in recent years.

This is not to overstate Georgia’s blue turn. It is only the slightest shade of blue, based on the slimmest of margins. The state may have helped the Democrats back into the White House, but could just as well end up sending two Republicans back to the Senate, with the promise of federal government gridlock.

Over the next two months, all eyes will be on these two runoffs. If Democrats can pull off two victories, they’ll assume control of the Senate.

In a 2017 special election, Ossoff ran for a House seat in Atlanta’s suburbs. It became seen as a referendum on Trump’s nascent presidency, and over US$50 million was spent, making it, at the time, the most expensive House race in U.S. history.

With not one but two races – and control of the Senate in the balance – money will likely pour into Georgia at an unprecedented clip over the next couple of months.

Perdue and Loeffler will find themselves as favorites – even if their close association with Trump may now be cause for some strategic repositioning. Perdue secured the most votes in the first round, and while Warnock had the largest share of the votes in the special election – 33 percent – the Republican candidates nonetheless outperformed the Democratic candidates in the 20-candidate field by a slim margin. Furthermore, Trump’s defeat will likely motivate Republicans to go all out to preserve their Senate majority. To both Democrats and Republicans, it could feel like Georgia gives with one hand and takes with the other.

That would be a fitting finale from one of the most divided states in a deeply divided nation, but the outcome is far from certain. With Democrats energized, Georgia might just flip the U.S. Senate as well.