A U.K.-based watchdog group charts the escalation, mainly in 2017, of counter-terrorism operations and the toll on civilians. 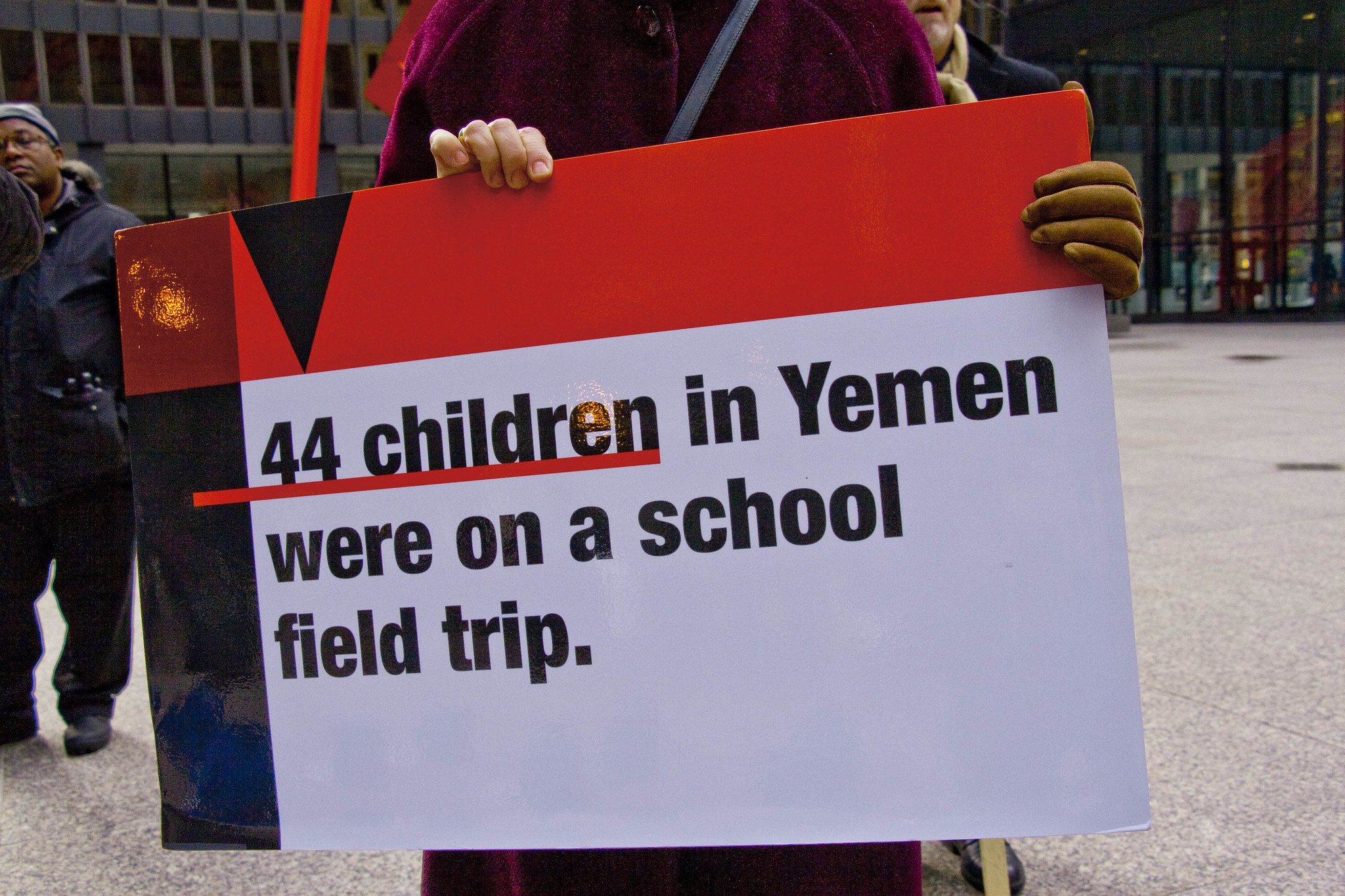 Less than a week out from a monumentally consequential general election, the U.K.-based watchdog group Airwars on Wednesday released a report detailing how U.S. counterterrorism “operations in Yemen — already on the rise during the last two years of the Obama administration — significantly escalated” under President Donald Trump.

Researched and written by Mohammed al-Jumaily and Edward Ray, the report— “Eroding Transparency” (pdf) —is accompanied by a public database tally of at least 230 declared or alleged U.S. military and CIA actions in Yemen since Trump took office, most which took place in 2017, the first year of his administration.

Among all U.S. actions in the country during Trump’s presidency, 41 elicited allegations of civilian harm. Overall, the report says, “25 reported U.S. actions were assessed by Airwars to have likely resulted in civilian harm, reportedly leading to the deaths of between 86 and 154 civilians, including at least 28 children and 13 women.”

In a series of tweets about the report, Airwars noted that Yemenis claim U.S. airstrikes and ground raids over the past four years have killed as many as 194 civilians. 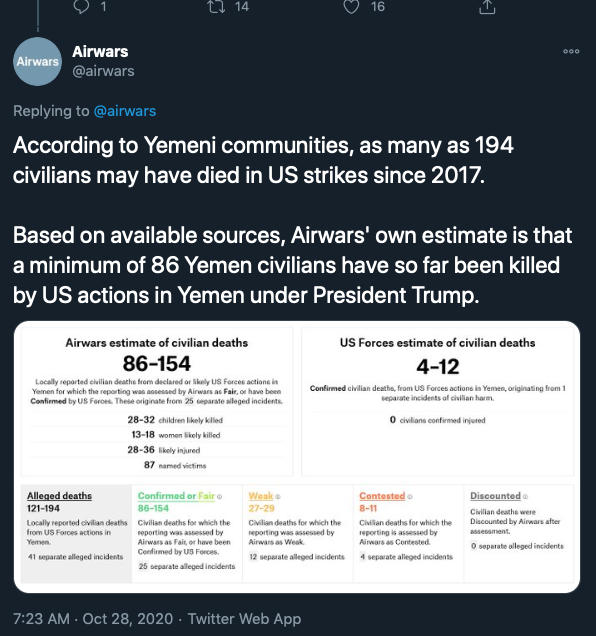 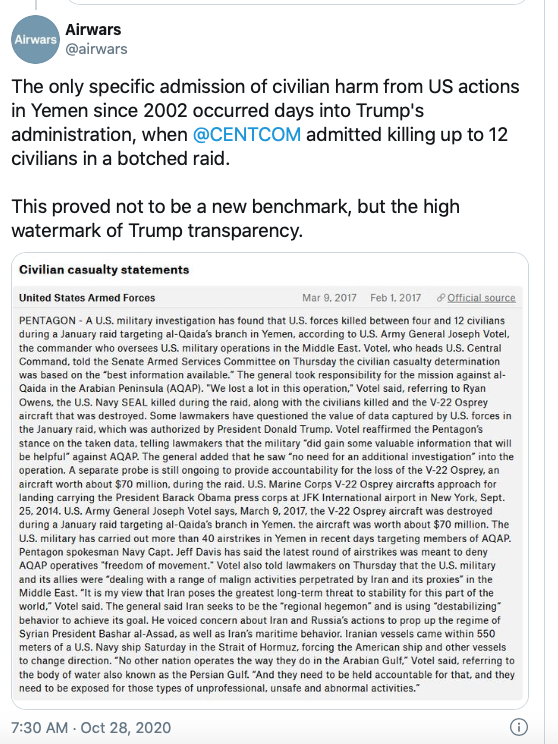 In an interview for the report, Luke Hartig, former senior director for counterterrorism at the National Security Council during the Obama administration, told Airwars that the observed surge in 2017—particularly the disastrous Yakla raid that January, the only Trump-era operation in Yemen for which the Pentagon has admitted civilian deaths—may be the result of a desire among military staff to increase U.S. actions in the region combining with the new administration’s more permissive approach, which included loosening rules of engagement meant to protect civilians.

“Clearly, and this had been reported, before Trump took office there was a desire to do more from the military, and they put forward a general concept of operations to allow for a greater degree of advice and assistance to partners on the ground,” Hartig said. “It seems what happened was that the Trump administration was keen to take the gloves off, as it were, to be what they perceived was tougher on terrorism, and this was one of the first ready-made concepts of operation available.” 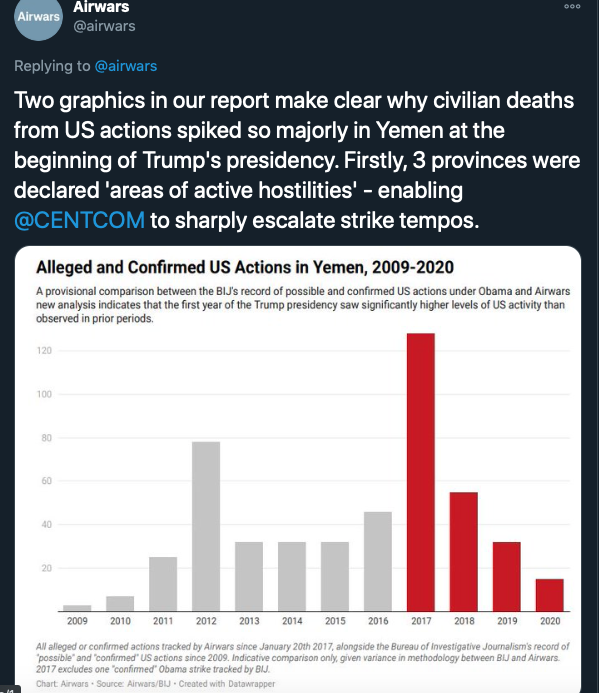 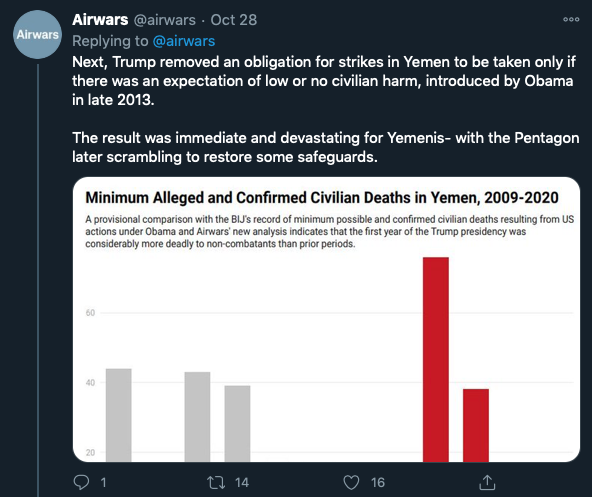 U.S. Central Command (CENTCOM), which is responsible for military strikes in Yemen, “has an obligation both to track and report on civilian harm from its actions. It appears to be failing on both counts,” the report says. Airwars explains:

“Recent claims to Congress that there were no known civilian harm claims relating to U.S. actions in Yemen during 2019 were, for example, incorrect. Senior officials informed Airwars that CENTCOM presently has no formally constituted civilian casualty cell to cover Yemen allegations. And despite Airwars providing CENTCOM with its complete civilian harm findings on Yemen during the Trump presidency nine weeks prior to this report’s publication, officials unfortunately failed to provide any event responses.”

Since the middle of last year, “covert and clandestine actions in Yemen appear to have dominated U.S. engagements, Airwars research shows—with troubling implications for civilian harm accountability,” the report adds. “While the last CENTCOM-declared U.S. military action in Yemen was on June 24, 2019, some 30 U.S. strikes have reportedly taken place there since. Three of those attacks have in fact been declared by U.S. officials, while a further 15 events were assessed by Airwars to be likely U.S. strikes.”

In other words, the Airwars report “raises the question of whether the Trump administration has switched to using the CIA for strikes in Yemen in order to shroud U.S. operations there in greater secrecy,” noted the London-based human rights group Reprieve in a statement Wendesday.

“These findings paint a shocking picture of a U.S. administration gone rogue in Yemen, so unconcerned with accountability that they haven’t even allocated a desk to track how many civilians their missiles kill,” said Jennifer Gibson, who leads Reprieve’s work on drone strikes. “This shadowy assassination program makes none of us safer, and is causing irreparable harm.”

Although the number of strikes in Yemen since mid-2019 represents a significant drop from the earlier days of Trump’s administration, Airwars director Chris Woods pushed back against the suggestion that the recent figures signal the president is delivering on his promises to end U.S. “forever wars” in an interview with Business Insider.

“It may just be that, from the perspective of U.S. national security officials, record-breaking airstrikes before have lessened the need for more airstrikes now. There is, also, a pandemic.

At the same time, the U.S. government, under Trump, is being less transparent about who and what is bombing. In response to criticism of its campaign of extrajudicial killings, the Obama administration published, just hours before Trump’s inauguration, a report detailing both the number of U.S. airstrikes abroad and the reported civilian harm they caused. The current administration has never published such a report since, transparency only coming in piecemeal form as a result of congressional action demanding it.

In 2019, the Department of Defense stopped even saying how many airstrikes it had carried out in Yemen, granted a lack of transparency usually reserved for the CIA.”

“Donald Trump’s wars represent a paradox,” Woods said. “While currently we’re seeing some of the lowest numbers of U.S. airstrikes in years across major theaters, including Afghanistan, Iraq, and Syria… this is a pretty recent phenomenon. Earlier on in his presidency, we saw record numbers of both airstrikes and reported civilian harm in multiple theaters, fueled by Trump’s stated intent to ‘take the gloves off’ against terror groups.”

The report also says it is “possible that domestic pressures within the U.S. are leading to restrictions,” referencing growing concern in Congress regarding U.S. military support for the Saudi-led intervention in Yemen. “While the primary focus of domestic opposition had been on U.S. arms sales and logistical support for the Saudi-led coalition,” Airwars notes, “it is possible that this increased attention had an associated effect on the Trump administration’s willingness to engage in unilateral counterterrorism actions in the country.”

The Washington Post reported Wednesday that the group’s study “comes as the Trump administration seeks to wind down counterinsurgent operations across the Middle East and Central Asia in keeping with the president’s desire to refocus resources at home and the Pentagon’s planned pivot to China. The administration is currently reducing forces in Afghanistan and Iraq, and fewer than 1,000 troops remain in Syria.”