“A twisted halftime show between executions.” Barbara Koeppel reports on the outrage over this year’s National Catholic Prayer Breakfast honoree. 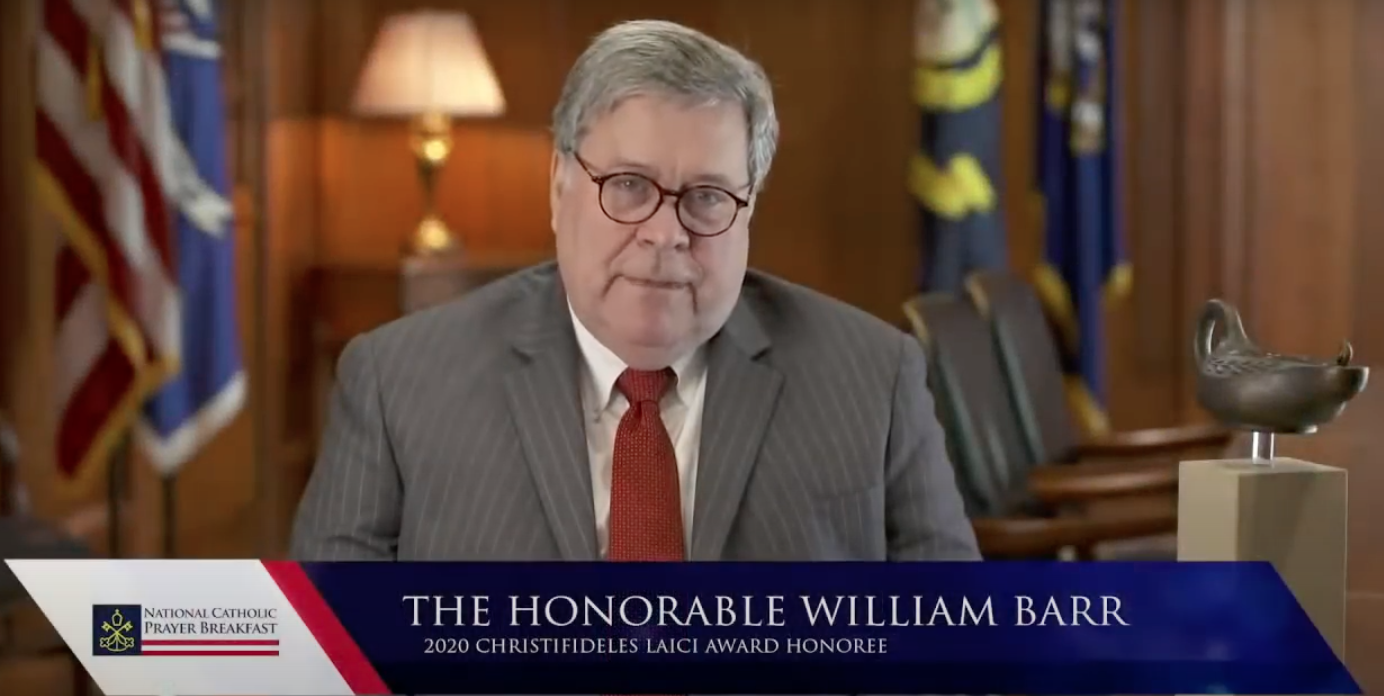 On Sept. 23, Attorney General William Barr was honored with the Christifideles Laici award at the 16th annual National Catholic Prayer Breakfast (NCPB). To those not versed in Latin, it’s given “to highlight the good works and those who serve the Church so well.”

Many Catholics were outraged. Barr reinstated the death penalty for federal prisoners this past July. Until then, there were none for 17 years. Since July, there have been seven.

The award was squeezed between the sixth and seventh executions: One was on Sept. 22, the day before the breakfast, and the other was on Sept. 24, the day after.  The two men, William LeCroy and Christopher Vialva, who had been convicted of murder, had been imprisoned for 26 and 20 years.

The yearly breakfast is sponsored by the Fellowship Foundation, which a 2019 NBC report described as an evangelical Christian organization, called “The Family,” that is quietly building its influence on global politics “in the name of Jesus.”

Although the Catholic Church allowed the death penalty for centuries, it changed its position under Pope John Paul II: In a 1999 Papal Mass in St Louis, the Pope said “The dignity of human life must never be taken away, even in the case of someone who has done great evil…the death penalty is both cruel and unnecessary.”

More recently, Pope Francis said it was “inadmissible because it is an attack on the inviolability and dignity of the person. Society can be protected in other ways.”

Sister Helen Prejean (the author of Dead Men Walking), called the decision to honor Barr “scandalous.” She noted that she chose this word “because he is so keen to kill criminals under his jurisdiction.”

“The breakfast is the product of the Federalist Society, which is behind the push to place conservative Catholics on the courts. Its president is Leonard Leo, who is the face of the right-wing of the Catholic faith. By giving Barr an award for ‘exemplary Christ-like behavior,’ they’re trying to pour holy water on the attorney general and the other Catholics who are close to the Federalist Society, saying they’re more Catholic than the Pope.

Leo has promoted all the conservative Catholics on the Court — Clarence Thomas, Samuel Alito, John Roberts and Brett Kavanaugh. He also pushed for Neil Gorsuch who was raised Catholic but now belongs to the Episcopal Church. Now, President Trump is set to appoint another right-wing Catholic, Amy Coney Barrett, who was also a Federalist Society member for four years.”

Sullivan adds that Leo is using the abortion issue as “the nose of the camel under the tent. The issues are much broader than just abortion. They want to repeal Obamacare and same-sex marriage, to transform the Church to the way it was in 1950s.  Since President Trump also addressed the Breakfast, the event is was a dramatic gesture to mix politics with the Church.”

As noted in The Washington Post, the Federalist Society, which was founded in 1982, has reached “an unprecedented peak of power and influence.” Previous speakers at the NCPB annual breakfasts in Washington, D.C., have been Vice President Mike Pence and former President George W. Bush

Krisanne Vaillancourt Murphy, executive director of Catholic Mobilizing Network Against the Death Penalty, called the National Catholic Prayer Breakfast “a twisted halftime show between executions, which could mislead the public to believe the Catholic Church somehow condones the death penalty. This is categorically false.”

Barbara Koeppel is a freelance investigative reporter based in Washington, D.C.