As`ad AbuKhalil says Muhammad bin Zayid was happy to provide the U.S. president with the foreign-policy gimmick he needed. 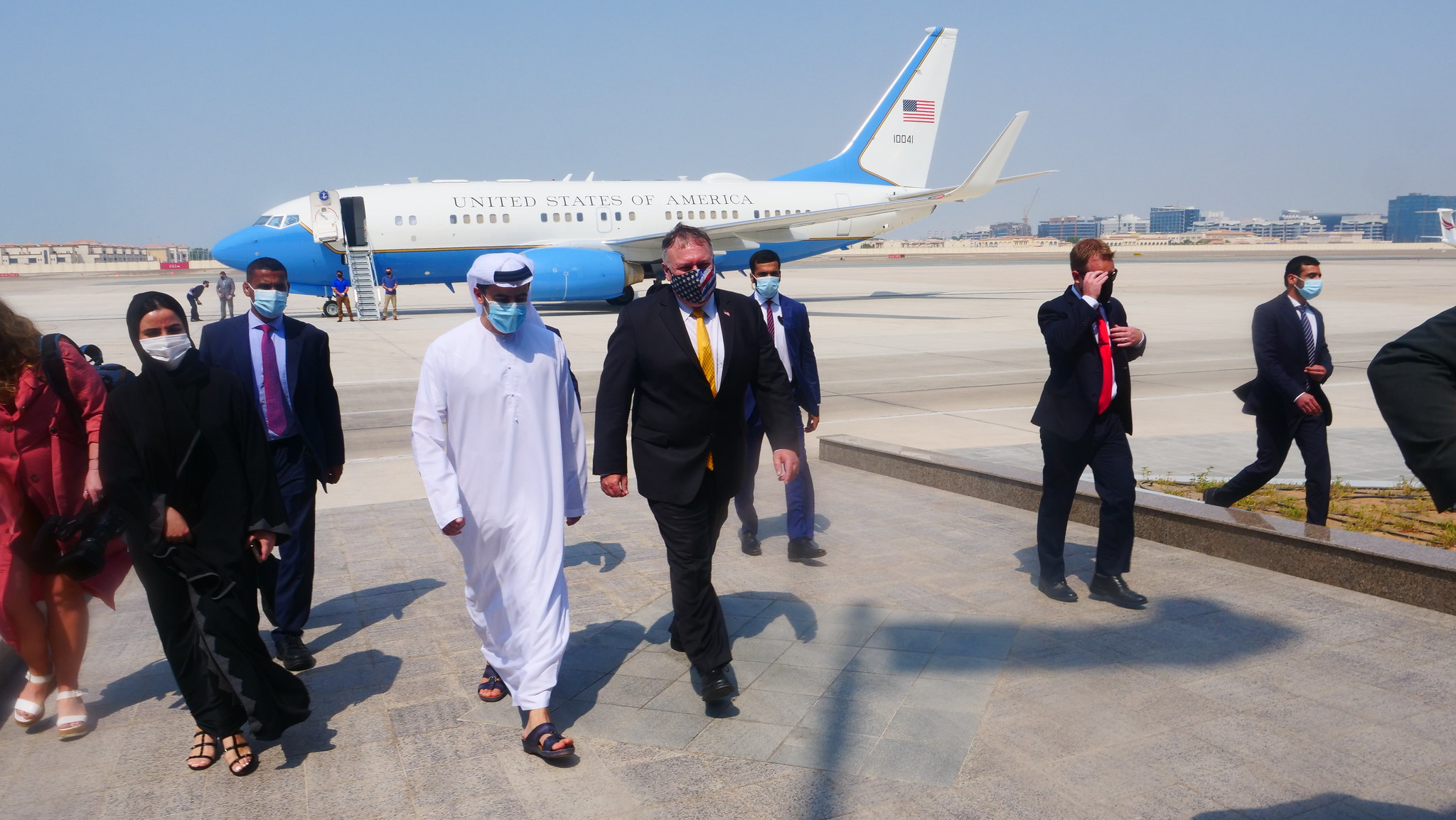 While Muhammad bin Salman, crown prince of Saudi Arabia (MbS), has become notorious for his role in the murder of Saudi journalist Jamal Khashoggi and for his military adventures in the Middle East, the role of his counterpart in the United Arab Emirates, Muhammad bin Zayid (MbZ), the actual UAE ruler, is less visible.  Unlike MbS, he is known for preferring secret diplomacy, avoidance of the media and underhanded intrigues.

But MbZ’s role in the Middle East is in fact bigger than MbS’s:   for instance, he has mentored MbS in the art of repression and regional misadventures.  MbZ is also militarily involved in Libya and Yemen and he sent troops to Afghanistan to assist the U.S. occupation.  He uses his Palestinian aide, Muhammad Dahlan, to buy influence among Palestinians.

The dramatic declaration of an impending peace treaty between the UAE and Israel was deliberately exaggerated by Jared Kushner, the son-in-law and aide to President Donald Trump, who is desperate to attribute a foreign policy success to both the Trump administration and to himself in the wake of the abysmal failure of the Deal of the Century, a personal and political initiative.

But Western media, which suffer from an acute case of racist bias in favor of Israel vis-à-vis Arabs, will always treat stories of normalization with Israel with added sympathy and exaggerated enthusiasm.  To this day, Egyptian anti-Semite (and Nazi-sympathizer) Anwar Sadat receives great coverage in U.S. media despite his brutal tyrannical regime, as well as his resort to Islamist militancy against leftist and Arab nationalist critics. (He was ironically killed by the very same Islamist militants that he had sponsored against the left, following Gamal Abdel Nasser’s death in 1970).

They Do Not Represent Arab People 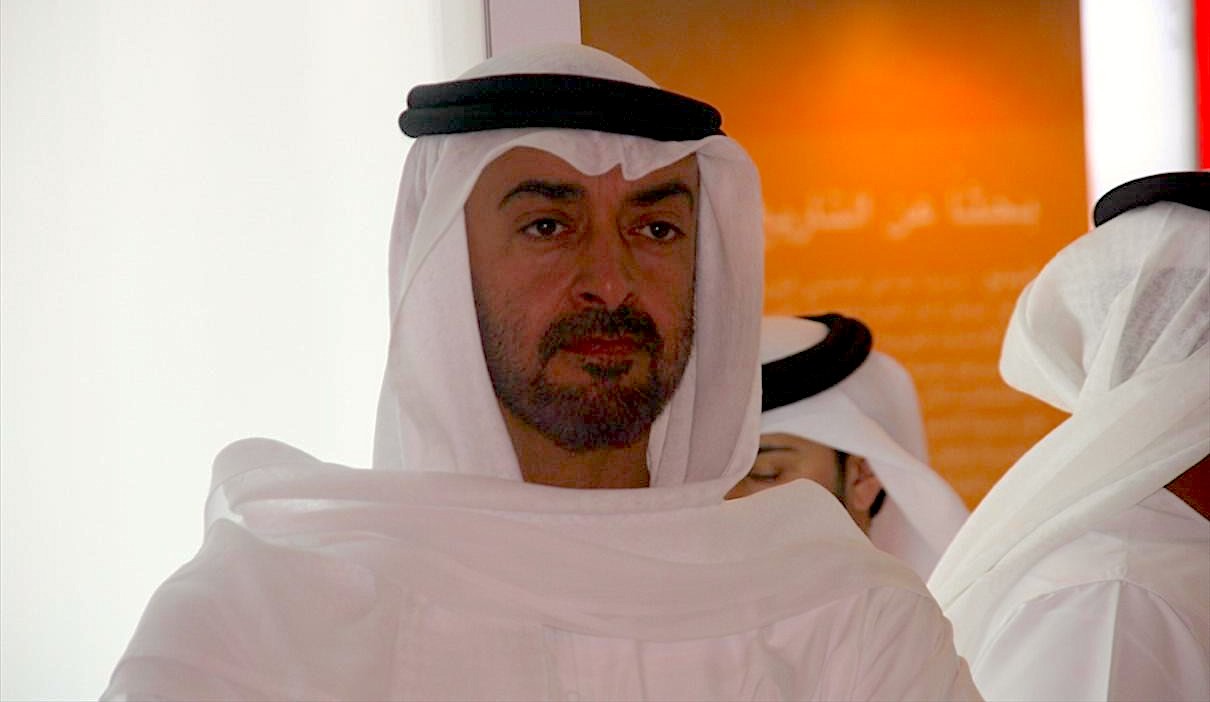 Israel (and sympathetic Western media) try to treat any Arab despot who makes peace with Israel as being representative of the Arab people.  Thus, Arab tyrants become known in media parlance as leaders of the so-called “Arab world;” Saudi-regime mouthpieces are identified as “pan-Arab newspapers;” and members of the entourage of royals are treated as spokespeople of the Arab masses. (Ben Hubbard in his book on MbS does just that).

The Arab world has indeed changed since 1968, when Arab leaders, under the leadership of Nasser (the only Arab leader who truly was championed all across the Arab world, and whose words made an impact on all Arab capitals), met in Khartoum to raise the “3 No’s”:

The slogan was in fact an attempt by Arab rulers to respond to popular rejection of Israel, and the slogan was not as radical as it sounded at the time, or since.  In reality, Nasser had actually given permission to the Jordanian king to engage in secret negotiations, even with Israel.

Gulf regimes, such as the UAE,  were never directly involved in the Arab-Israeli conflict. To be sure, you can find on the internet pictures of Saudi princes allegedly receiving military training to support Nasser in 1956, when the U.K., France, and Israel attacked Egypt over Nasser’s nationalization of the Suez Canal.

But those pictures are fodder for humor and mockery by young Arabs, no more.  When Gulf regimes speak of their past support for Palestinians, they merely refer to payments they had made in the past to the PLO under Yasser Arafat (and later in smaller amounts to the Palesininan Authority).

Gulf regimes paid the PLO protection money; they were making sure that their lands were not used for PLO military operations against Western or Arab targets.  Saudi Arabia also imposed special taxes on the Palestinians working in the kingdom, and donated the proceeds— with great fanfare and publicity — to the PLO leadership. 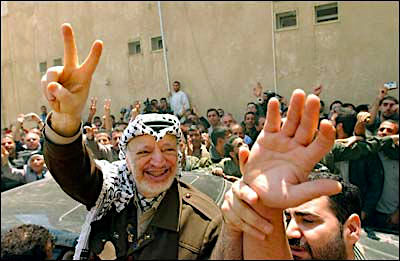 Gulf regime payments served another, more fatal purpose: they were designed, first to support Arafat against his radical rivals within the Fath Movement and later to support the right-wing, Fath Movement against the more radical Marxist Popular Front for the Liberation of Palestine (PFLP).

Arafat used the money (which never amounted to the billions that the Saudi regime donated to the Afghan cause against the communist regime in Afghanistan) to buy off and pay off rivals and loyalists alike.

When Arafat and the PLO expressed sympathy for Saddam Husayn, after his invasion and occupation of Kuwait in 1990, Gulf funding for the PLO was halted and this financial strangulation of Arafat was a key factor for his unilateral pursuit of peace with Israel.

Furthermore, the U.S. also sought cutting PLO funds to pressure Arafat into more making more concessions and compromises with Israel.  Gulf regimes’ ties with Israel became more intense during those times (relationships between some Gulf countries and Israel go back earlier:  Saudi Arabia resorted to Israel in the 1960s during its brutal war in Yemen, and Sultan Qaboos of Oman received Israeli support when he faced a brave radical rebellion in Dhofar in the 1970s).

It was Qatar, among Gulf countries, that initiated open normalization with Israel in the late 1990s, when the enmity between the Qatari and Saudi regimes reached its zenith.  The emir of Qatar accused the Saudi regime of trying to overthrow him, and he sought relations with Israel to counterbalance — in his mind — Saudi hegemony, as if Israel was going to save the Qatari throne.

But the Qatari regime operated on the very principle that Arafat had operated on: that you can only reach the American administration and appease Congress by placating the Israeli government.  And the Qatari regime’s television channel, Al-Jazeera, violated a hitherto firm principle of Arab media, namely to never host Israeli guests. The Qatari regime introduced Israeli propagandists into Arab homes. 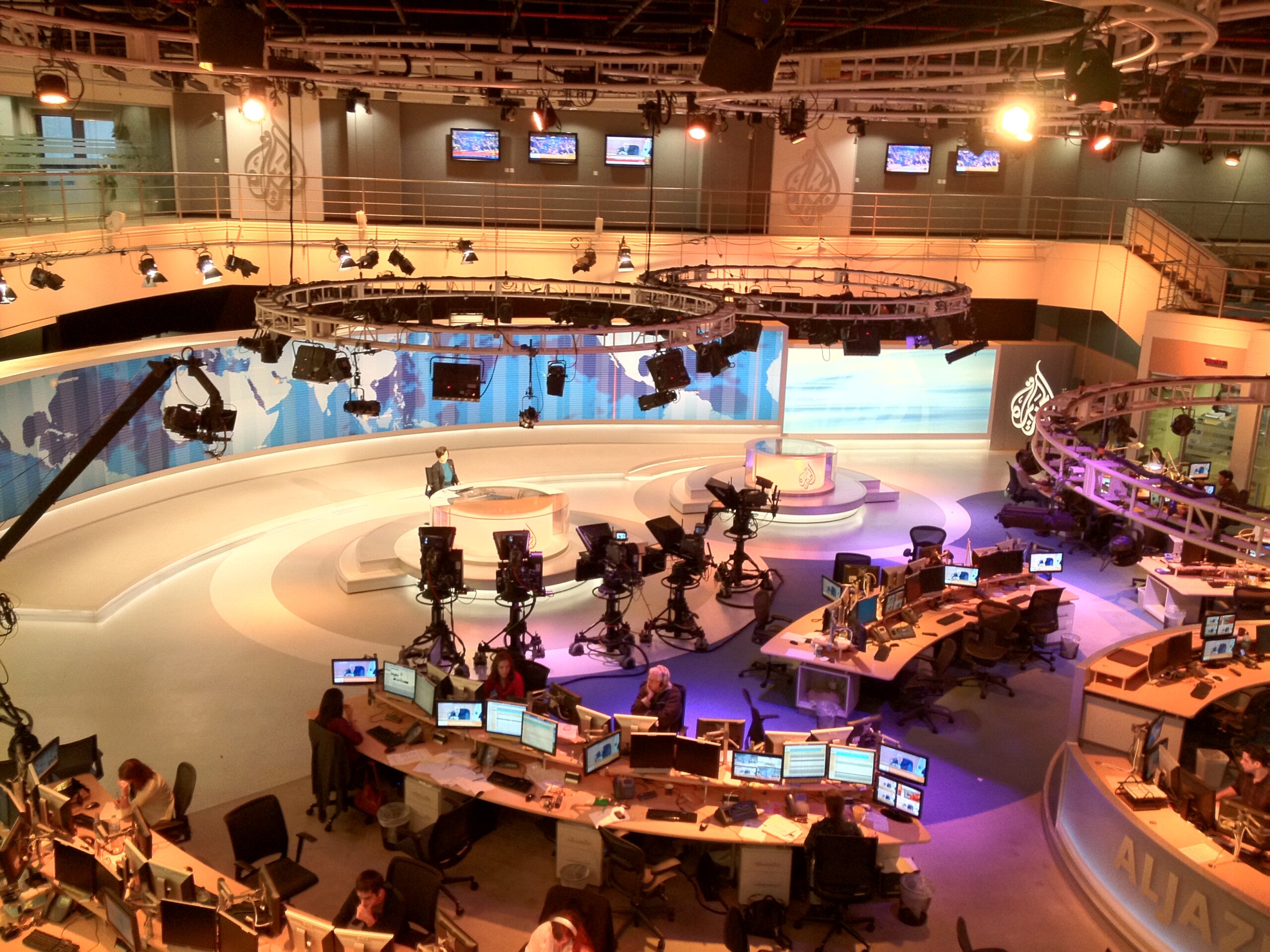 It was in that context that Gulf regimes began their race toward Tel Aviv.

The UAE and Saudi Arabia both wanted to avoid the wrath of the U.S. Congress after Sept. 11, and they knew that AIPAC would reward any rapprochement between Gulf despots and Tel Aviv.  Both countries also knew that new relations would also increase the menu of arms for Arab royal purchases.

The big loser in this new Gulf rush to Tel Aviv is the Jordanian regime, which — along, to a lesser degree, with the Moroccan regime — played the role of messenger between Israel and Gulf despots.  They all found channels to Israel and, significantly, Kuwait remained the last holdover in the Gulf against establishing relations with Israel.

It is no coincidence that of all the Gulf countries, Kuwait remains the only one which has a (mildly) representative political system — as flawed as it is given the political supremacy of the royal family and the military presence of the U.S. — and its press allows openness and debates — albeit constrained — never seen in neighboring Gulf nations. Kuwait, in that respect, is more respectful of its native public opinion than the Gulf regimes that opened ties with Israel.

Arab despots’ normalization with Israel comes at a price, however. They need to increase their level of oppression at home to engage in open normalization and to receive Israeli official guests. Sadat had to increase his level of repression — with U.S.-Israeli blessings and arms — that resulted in his assassination.

But the U.S. is always ready to assist, along with Israel, in financial, military, and intelligence assistance to help keep Arab despots in power. 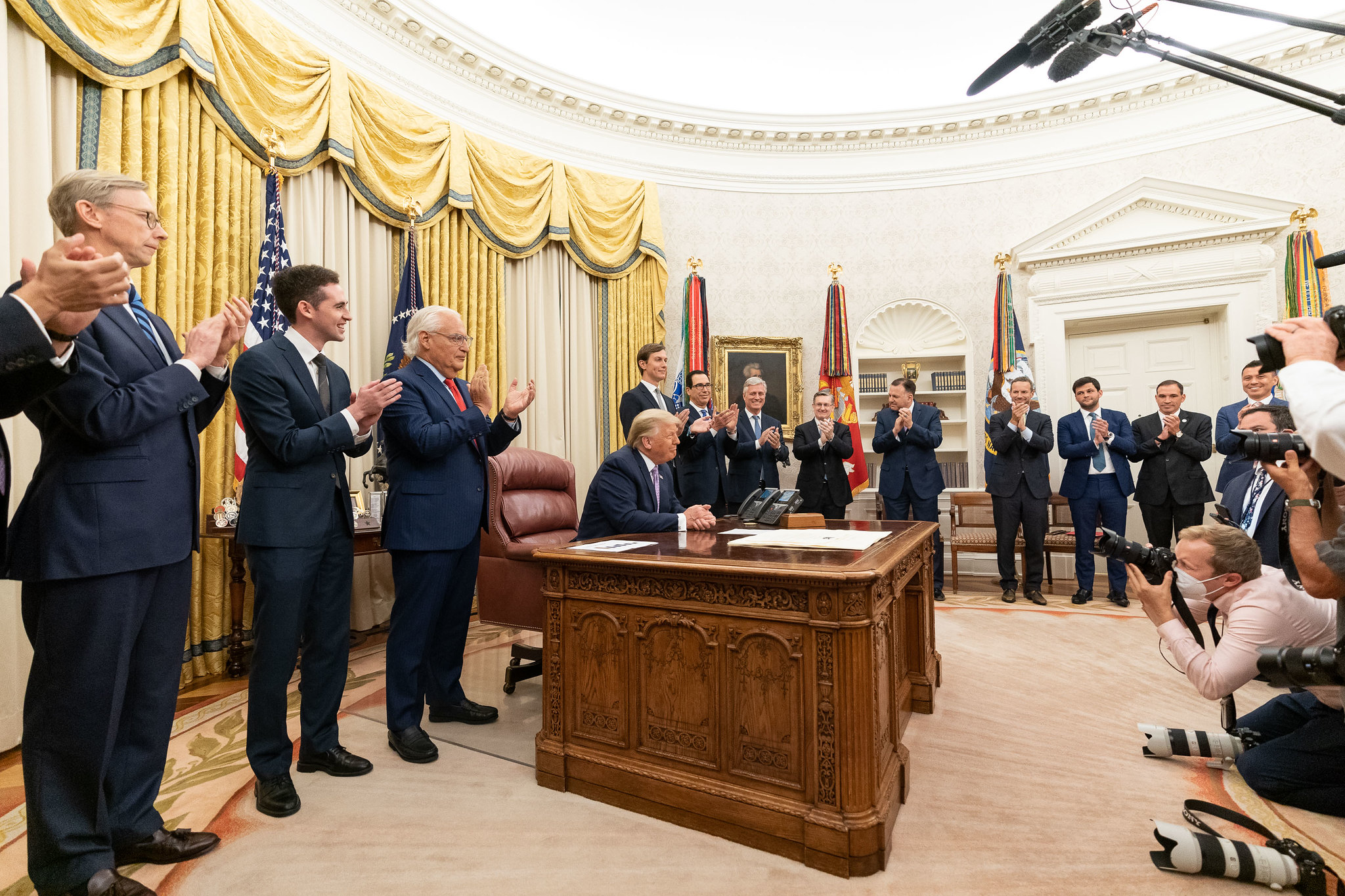 There were some truths that Trump uttered about U.S. foreign policy in the Middle East that no previous president had ever uttered. He said that the relationship between U.S. and the Gulf is purely transactional: the U.S. keeps them in power in return for loyalty.  And Trump only agreed to have good relationships with Gulf tyrants because he demanded more money, and even more loyalty.

The UAE’s normalization with Israel should be read in that context.

Not much will change in the history of the Palestinian cause with the UAE’s formal recognition and diplomatic ties with Israel. Gulf despots were never supportive of the Palestinian struggle. They are the descendants of rulers who engineered the Arab defeat in 1948 at the behest of British colonial power.

They like to promise Israel that they can change Arab political culture, but that is an empty promise.  None of those rulers enjoy any popularity among the Arab people, and almost all Arabs have never heard the voice of MbZ, who avoids public speaking.  The Egyptian people, who after more than 40 years of normalization with Israel, remain firmly opposed to it, and U.S. puppets in Cairo remain fearful of visiting Israel due to a hostile public reaction.

Facing a tough reelection effort, Trump needed a foreign policy gimmick, and MbZ was more than willing to provide him with one.

← US Wars Kill More Like a Python Than a Tiger
PATRICK LAWRENCE: Voting in a De-Facto Military State →